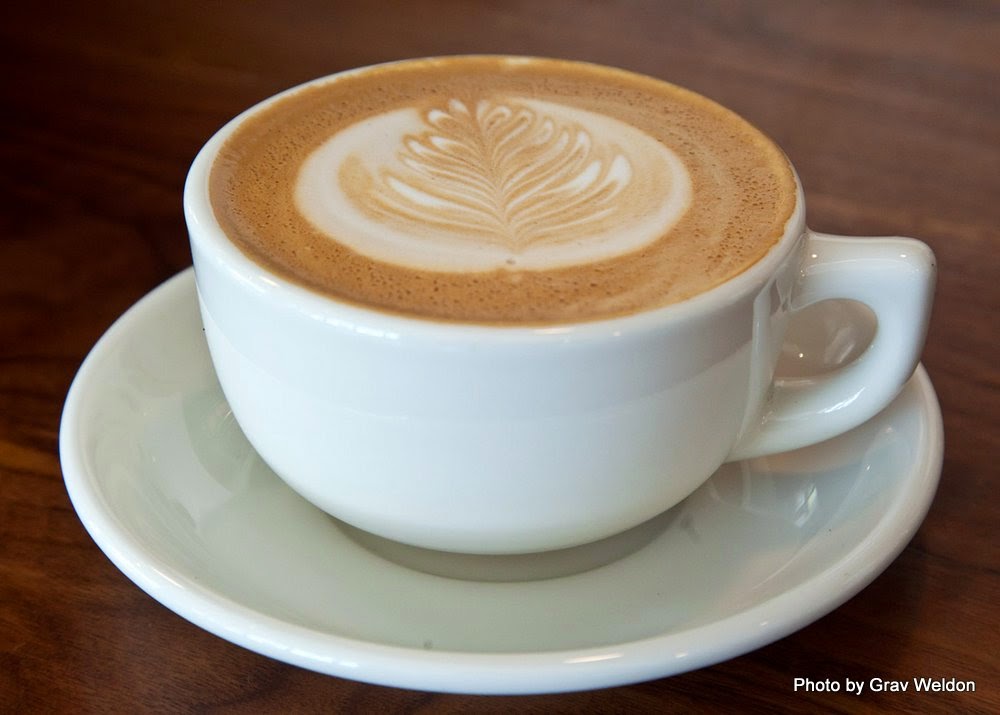 They say you can't go home again.  I suppose whoever "they" are understands that better than I do.  I still think you can.  However, in the case of Guillermo's, my local coffee shop -- I found the doors closed and the lights off on a Sunday afternoon. Though the website says they're open 9am to 6pm on Sundays, at 12:30 in the afternoon there was not a soul in sight.

My former places to enjoy a good cuppa and write a bit have evaporated these past two and a half years. Sufficient Grounds, which became The House, is now The Pantry and no longer a coffee shop -- and Gellattes has just evaporated. Guillermo's, where I wrote most of my work in 2011, had been steady but with Hans Oliver no longer running the show I suspected things have changed. 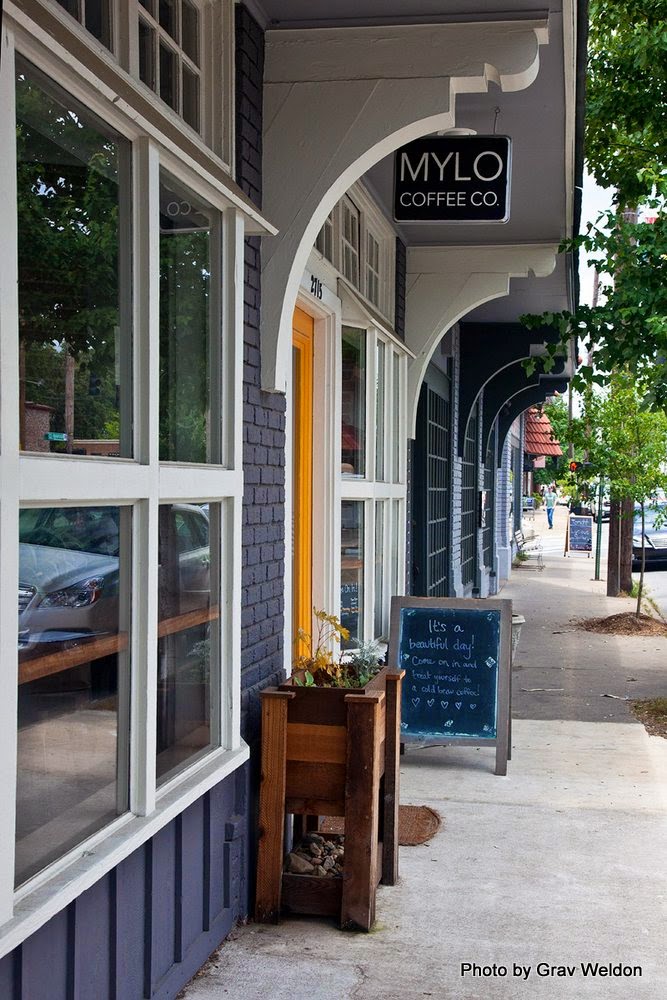 So that one particular Sunday I headed to Hillcrest to spend a little time at River City Coffee Company -- only to find its dark wood interiors were whitewashed. Moreso, that place isn't there now -- it's been replaced by Mylo Coffee Company.

If I were the sort not to try new things, I would have been quite disappointed and maybe have made my way back home, since most the other local places where I might consume coffee would be closed on a Sunday. But I was undaunted -- and moreso, I was looking for a place to write. 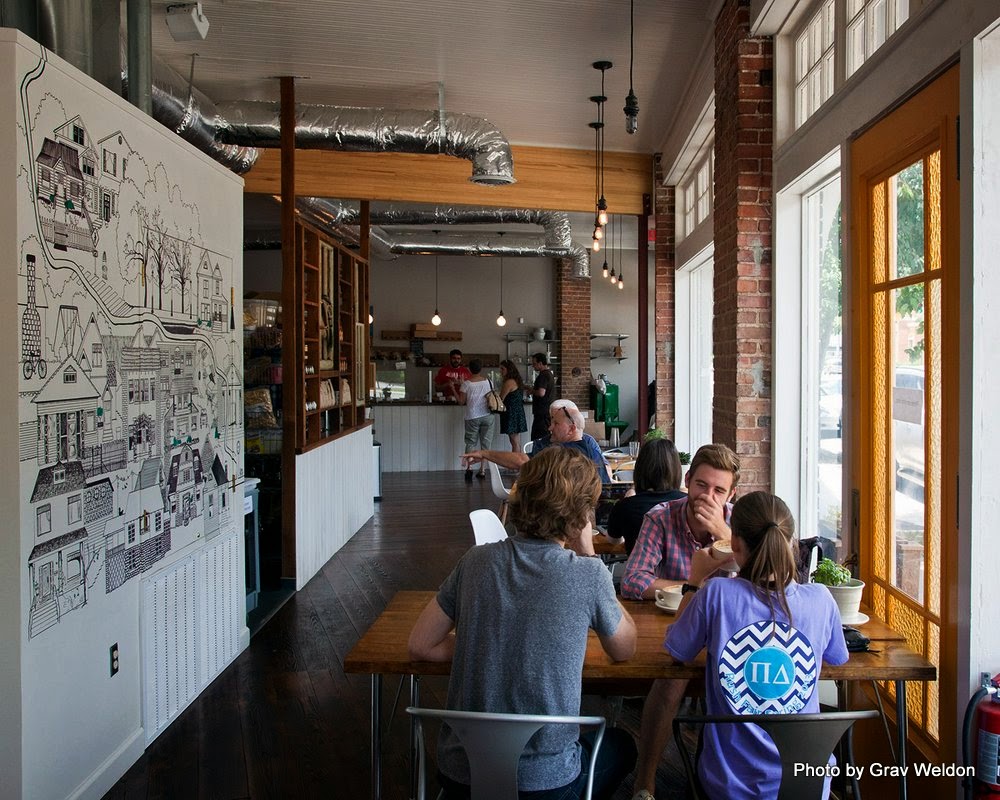 So I walked through the door and into a business with dark stained floors, whitewashed ceilings, exposed brick and white tile... and waited for a smattering of hipster smarm. After all, this place has been a major magnet for the uppity foodie types, right? 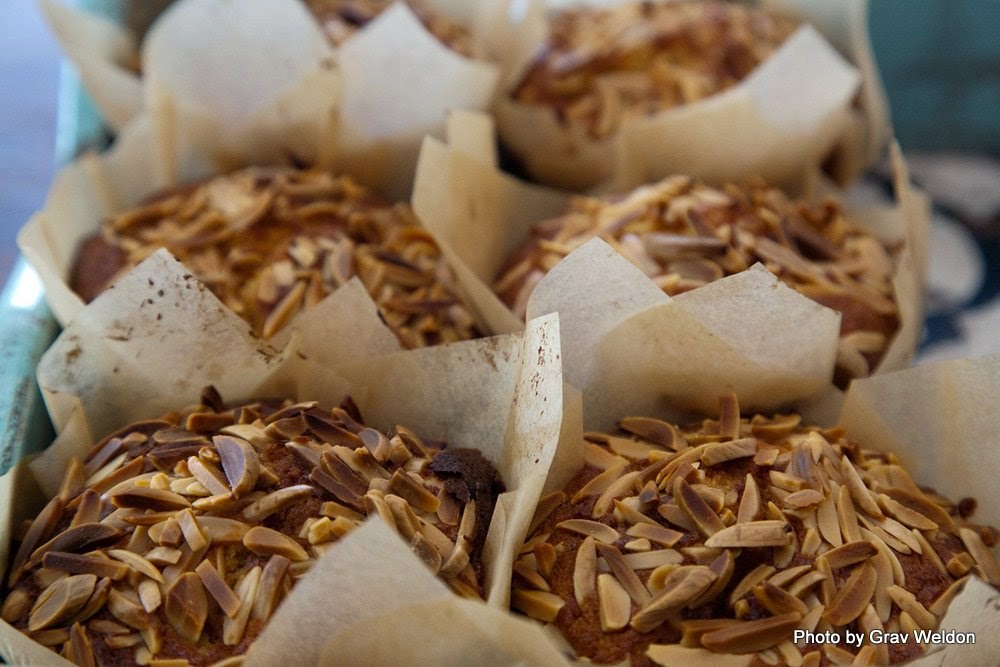 Then I saw the sign saying that War Eagle Mill flour was used in baked goods, and let my mind be persuaded. After all, if I'm trying something new, I should expect some new ideas, too.

The first really big new idea came in the coffee itself. I'm a black coffee drinker. I might drop in a cube or two of natural sugar if it's available, but if I am seriously working I want it black and strong. And yes, there are espressos and cappuccinos and mochas available -- but what entranced me was the idea of pour-over coffee. I mean, what does that mean? 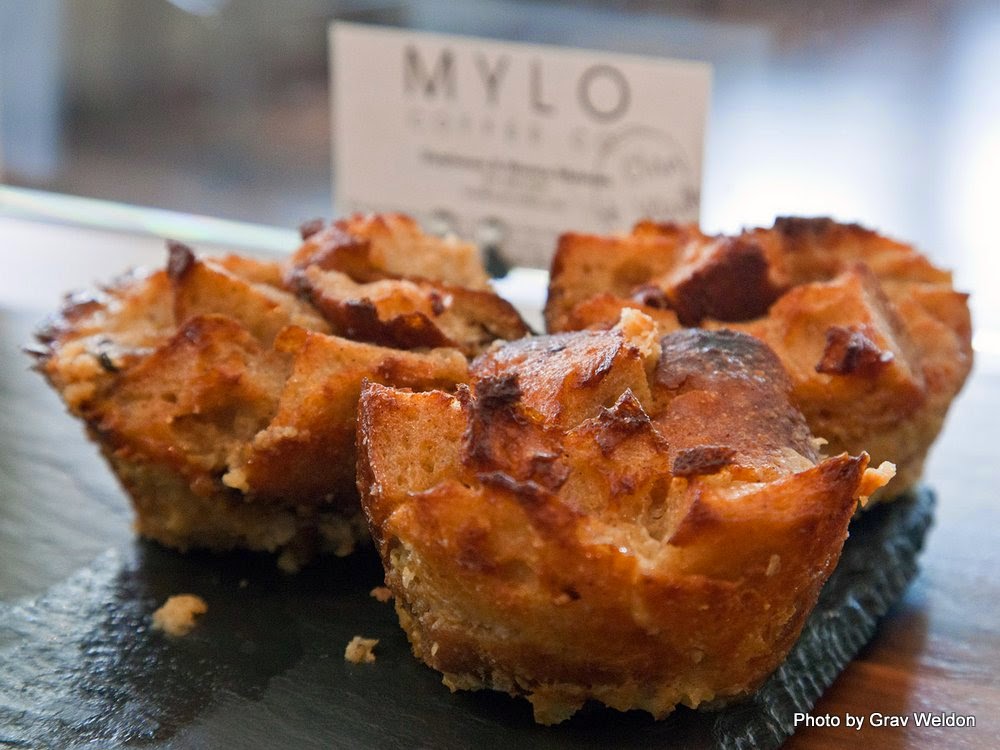 It means, dear friends, that instead of brewing a whole pot at a time, percolating an entire eight servings of hot coffee that can go bitter before the last cup is served, that each cup is made right then. That's not to say other places get it wrong -- my friends at Guillermo's would almost always have a fresh 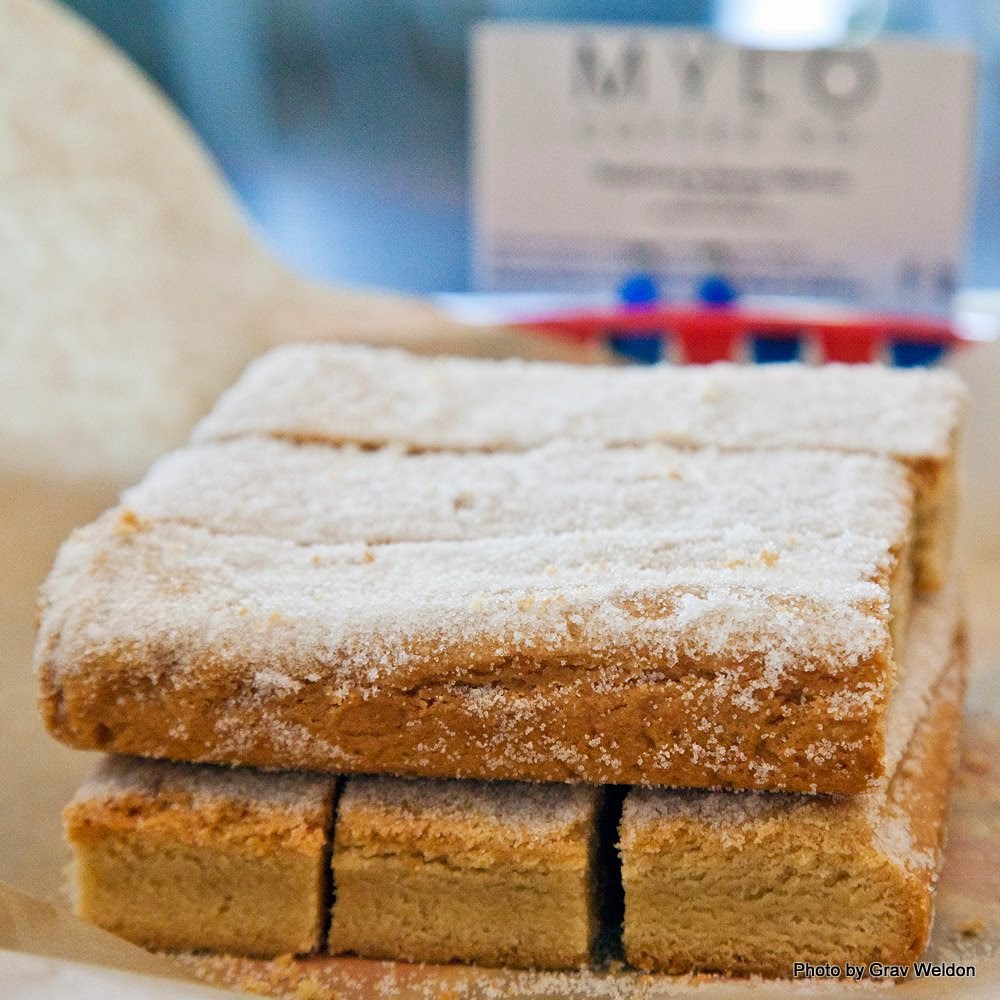 cup in my hand before I wrote my first word of the day -- but it does make for a very individualized experience.

The barista working offered me choices -- a house blend, a medium roast and the option to have either made stronger. He also grinned when I asked for my black coffee. Other places people have smirked when I ordered -- thinking I might load it up on the other end with add-ins. I don't think that was the case here.

Speaking of cases -- there was a case below the coffee area full of bottles of Loblolly strawberry lemonade. Now, what rock have I been under that I haven't known about such a thing? Don't answer that -- it's for another post. 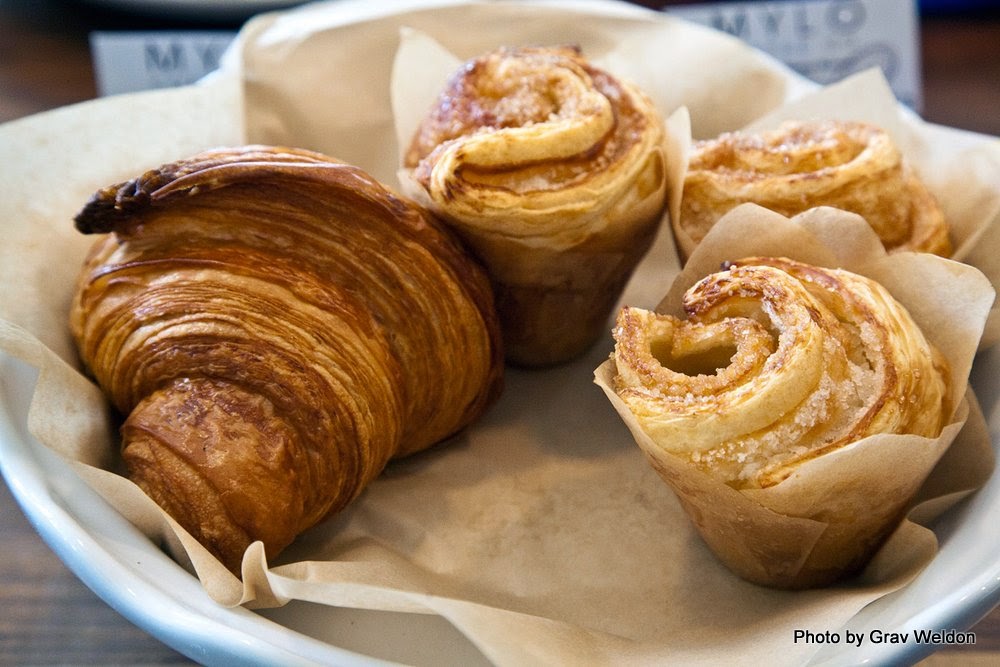 But to the right of the register (is that what it is? It looks like a tablet on a chopping block!) there were all sorts of pastries, and I spotted a chocolate croissant and had to have it. It was huge. It was bigger than my fist and fluffy and crispy looking and I had to have it. So I did. 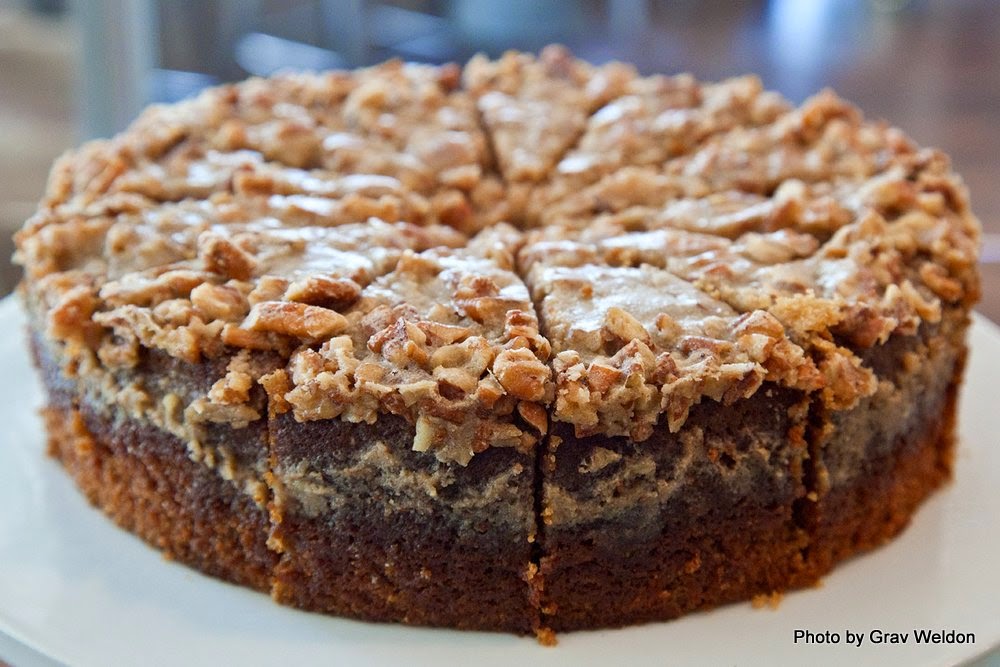 Mind you, it wasn't cheap. Though pour-over coffee's $3, the pastry was $3.50, and all I had planned to do was plant myself in a comfy chair and write away the afternoon. And after I finished, that was the other thing. 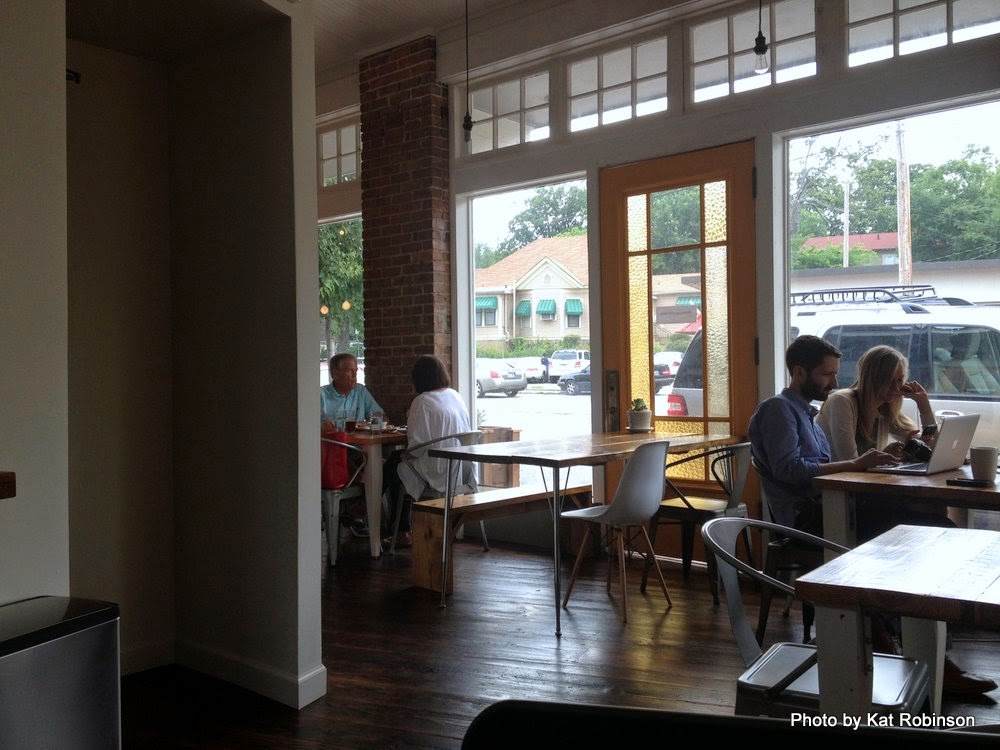 There are no couches, no easy chairs at Mylo. Just reclaimed wood tables, benches and outdoor seating, which was disappointing. There were also few outlets -- which told me that there was little concern for my sort of coffeeshop patron. See, for me, the coffeeshop is the ideal engine to get my mind going for writing. Caffeine in the air, others working, good lighting, outlets and understanding baristas do a good coffeehouse make.

I watched my coffee being made -- filter being placed in a ceramic filter cup, a tablespoon of fresh grounds dropped in, a young woman slowly pouring water over the grounds and watching the water flow through to the cup below. It was very modern and fresh and clean and bright, almost like a commercial. This was certainly not my usual coffee experience. 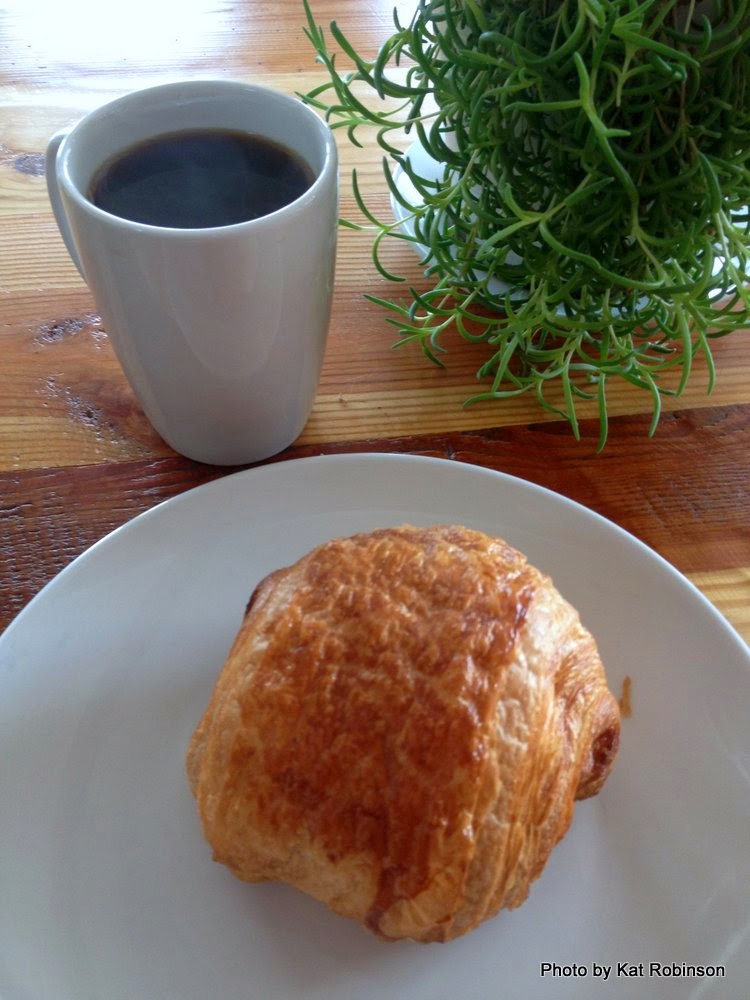 Briefly I considered consuming the edibles I had procured and heading downtown to Andina's, if they were open, or heading next doorish to Rosalia's -- but I stayed instead. I found an out-of-the-way spot at a long table next to the wall and got to writing.

And... people watching. Yes, there were a lot of people coming through. Families with small children. Older folks with books, younger folks with computers, couples digging their way through newspapers. 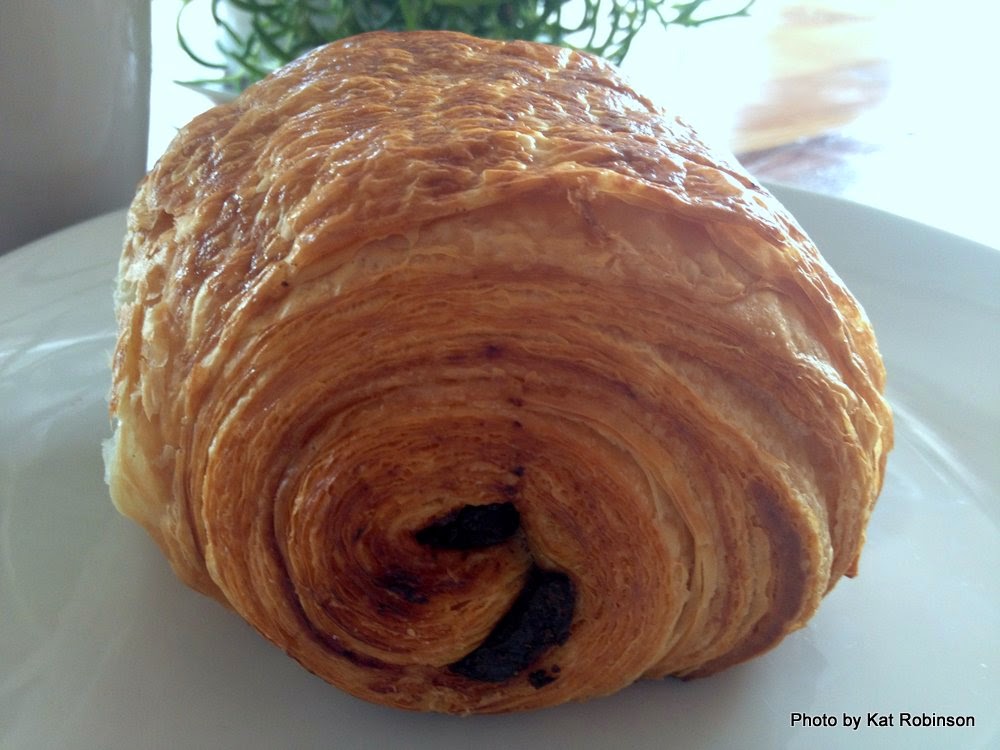 And... eating. I pulled apart the impossibly fluffy chocolate croissant and ate it with my fingers, wiping them on a napkin before each time I tackled the keyboard. It was so very light, and the chocolate inside suitably dark and scrumptious -- oh golly, did I really just use that word? What is wrong with me? -- sipping on my sufficiently bold and robust blend with just the right amount of roundness to the flavor like a slowly roasting fire's heat,

And I felt like some weird pretender. Indeed, when I looked away from my wide laptop I noticed there were just as many eyes on me in my old tie dye blouse with my hair swept back as there were people for me to quietly ponder. These folks seem so urban, so hip... I'm just not in that class, am I? 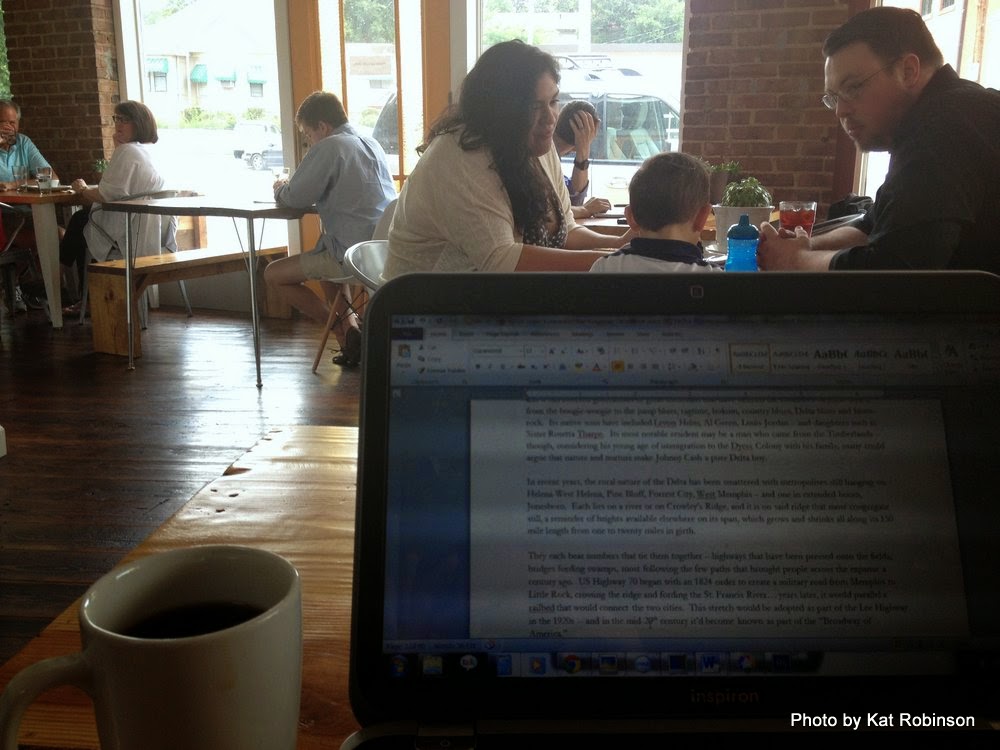 Still, no one hurried me along or encouraged me to finish my beverage. They left me to write, and write I did, sitting in a patio chair with my back to an exposed brick wall, pretty much unable to concentrate on stitching together tales of the Arkansas Delta thanks to the pure modern-ness of it all.

Don't get me wrong... it's a very nice, very clean coffeehouse with good products. But it may be too much -- I mean, it's perfect for someone wanting to meet another someone for quiet conversation or to go through the paper, but it's about as far away as gumbo soil and highway miles as I could get.

That's not a problem. If I were writing a novella about life in a coffeeshop, it has potential. Those rustic-bread paninis also have potential. LOTS of potential. In fact, enough that I almost considered getting one. But by that point my back was achy and my resolve to write about barbecue joints and hot summer afternoons had faded, and I had to go get it back. So I fled.

Well, sorta. I planned to flee. And then I wrote this piece instead. And then I stayed -- despite the gradually frustrating patio chair and all the eyes. I stayed, because though it might not be what I'm used to in a coffeeshop, it did offer fabulous coffee and a really remarkable chocolate croissant.

See, a lot of my personal choices for a coffeeshop are about comfort -- physical comfort. When I can find a good pairing of coffee, available electricity, a place where I can sit where I won't be bothered and a nice selection of edibles, I've hit the jackpot. Mylo is a little short on those electrical outlets and comfy chairs... but it does have a comfortable vibe -- which I witnesses as individuals kept coming through the door, sitting and talking with each other. 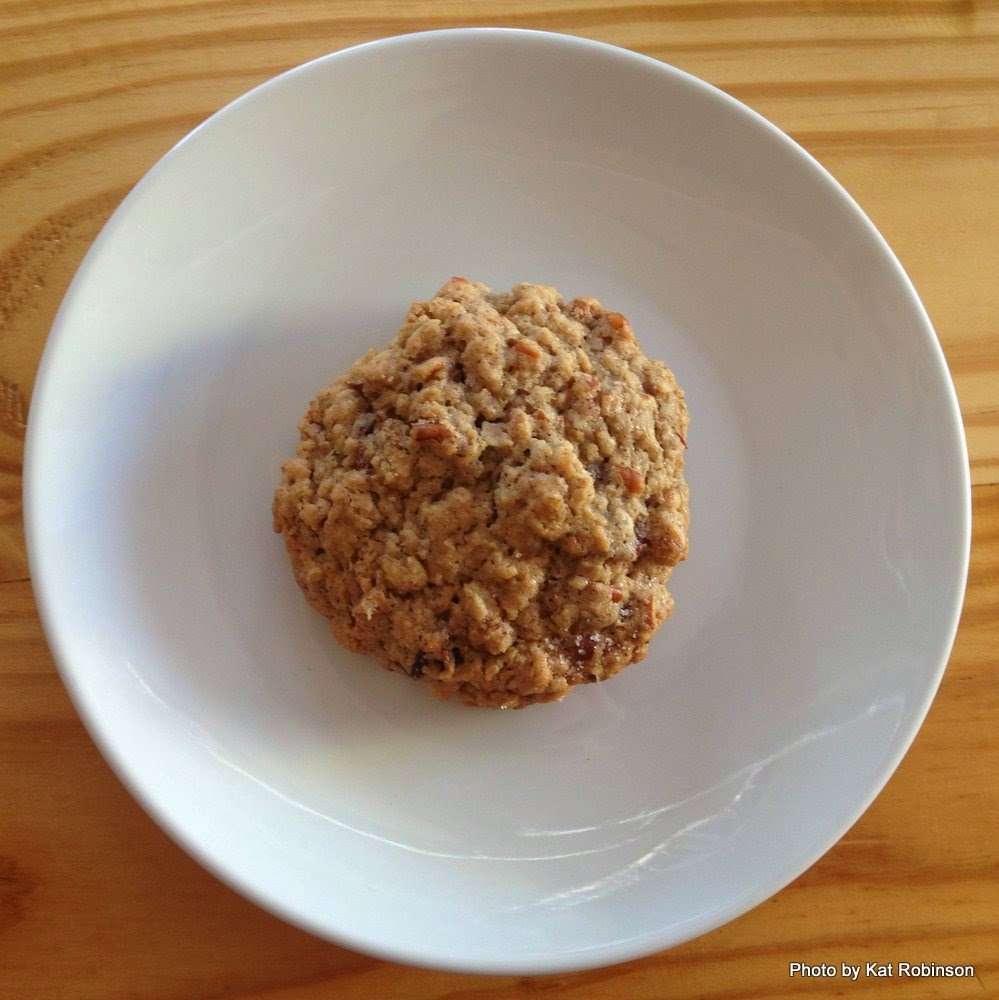 Frankly, Mylo is a crossroads. And if you're looking for a good place for a conversation and a great cuppa, give it a shot. Also, the pastries are wonderful.

Even this end-of-day oatmeal raisin cookie... which was delivered to me... close to closing time. Yeah. 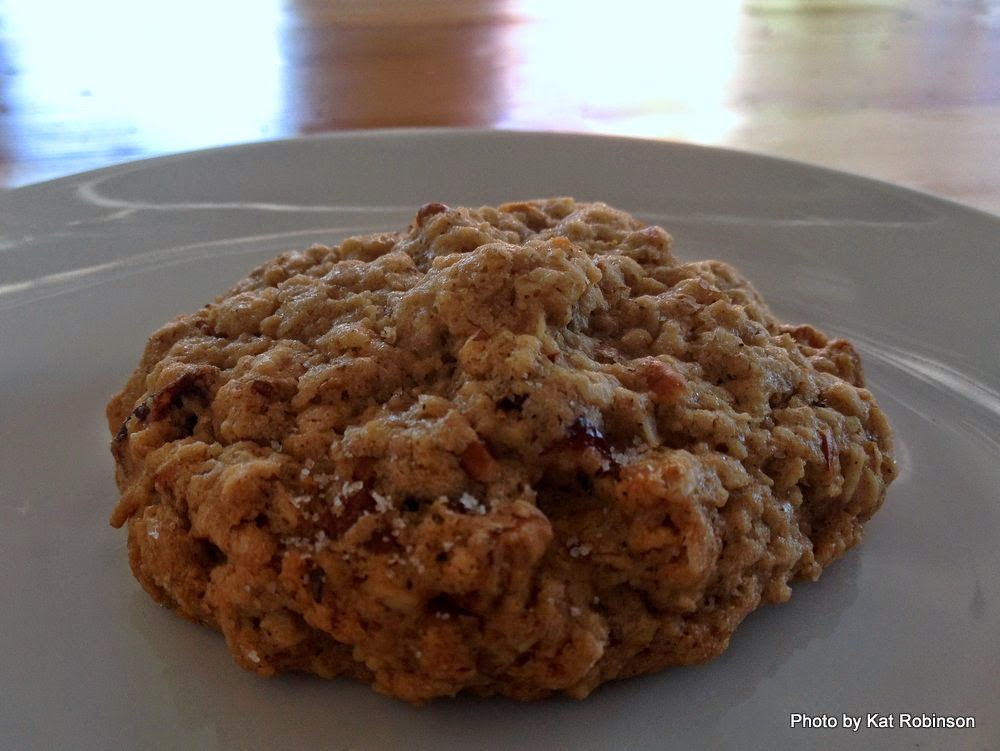