The Creation and Creator of the Arkansas Delta Tamale. 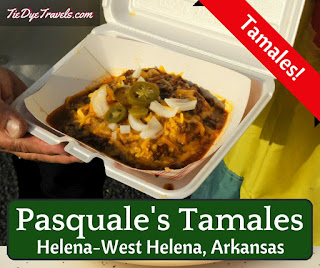 This is the story of an immigrant who came to America and settled in Helena; of his son, who funded and cultivated a tamale; and of his grandson, who still sells the handmade dish today. Let me tell you about Pasquale's Tamales. 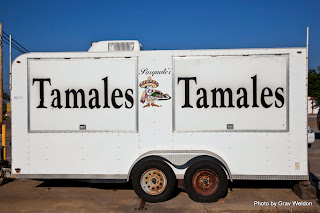 Every Friday and Saturday morning, a white trailer appears alongside Highway 49 in West Helena bearing the single word on a banner.

Throughout the day, cars pull up and pull away. A scent wafts on the breeze, full of corn and beef and spices and more corn. And while the trailer is new, the scent is ancient to the settled Delta.
If you were to go to the window of the trailer, you would be greeted by Joe and Joyce St. Columbia. 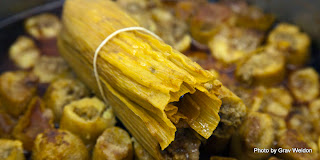 The tamales are Joe’s grandfather’s recipe. The reason they’re being sold today has far more to do with Joyce. One way or another, the tamales and the way they are made are particularly Arkansas Delta, and something that dates back more than a century.

Joe St. Columbia’s grandfather Peter came to America in 1892, leaving behind his wife and only son in Cefalu, Sicily, to find his fortune. He landed in New Orleans, all but penniless, and went to work doing what was easy-to-get work – but not easy-to-do work – cutting sugar cane. He cut cane for 50 cents a day, until he had enough to board passage up the Mississippi River.

He made it as far as Helena. Joe says it’s possible his grandfather had just run out of money. He was just the second Italian to make it to Helena, a town already full of Greeks, Germans, Lebanese, Chinese and Jews also seeking a better life in America. Helena at the turn of the century was an ethnic stew, a blend of ethnicities smattered into the already growing population of whites and blacks who had been there since before the Civil War and Mexicans coming north to work the plantations. Most of these immigrants came together with the community through the Catholic church – and they assimilated well here.

In 1897, Peter had earned enough money as a merchant vendor marketing wares to families along the Mississippi levee, to send for his wife and son for a visit. They came through Ellis Island and then from New York by train -- $300 for the entire journey. When they arrived and saw how well Peter had done in this new place, they decided to stay.

He was able to pick up languages easily, and his Sicilian dialect of Italian wasn’t so different from the Spanish being spoken by the Mexican families who sent men to the fields to work cotton. He got to know many of them well, and they shared gossip and recipes. He taught them spaghetti and pasta making and Italian dishes – and they taught him how to make tamales. The tamales they’d make would include anything from chicken to pork to goat. They were the perfect portable meal to carry in the field – they were better warm, and since they were already packaged in corn husks they had their own biodegradable container.

The recipe Peter put together was a little different from what he was taught. Instead of the other meats, he used just beef in his, good cuts lower in fat, a finer ground mesa and plenty of spices. These he’d take out to the fields and sell to other farm workers. They caught on, and the Delta tamale was born, a blend of minced beef and spices in masa, wrapped in corn husks and steamed, far more spicy than the Mexican counterpart of the time.

The St. Columbia family prospered in the new world. Peter peddled wares, drove a taxi, ran a grocery and made some investments. By the first world war they were doing well, and he and his son Sam built and bought properties in downtown Helena. The Depression came about, and they still did just fine – owing to the fact that Sam and Peter never trusted the banks. While those around them lost their shirts, he managed to keep ahold of those properties and businesses – and purchase more. As Joe related to me, it wasn’t uncommon to hear people speak of the St. Columbia family as such, “don’t those damn (Italians) know how tough finances are, spending all that money?”

Sam’s thought on the matter was “If I do well during the Depression, when there’s no more Depression I’ll be rich.”

A couple, Eugene and Maggie Brown, approached him about renting out one of his buildings. They were looking for a way to support themselves and they wanted to open a restaurant that sold soul food, sandwiches and pie. Sam saw he had an empty building that would just sit empty if he didn’t do something with it – and these folks seemed honest and a good investment. So he agreed to let them use the property on one condition – use his recipe to make tamales. And they did – altering it just a little bit. 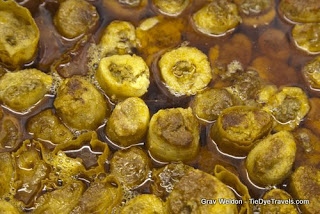 That combination – a Mexican dish recreated by an Italian and produced by hand by an African-American family as soul food – created the Arkansas version of the Delta tamale. And oh how it sold. The Elm Street Tamale Shop took off, and it became quite well known, with folks coming out of the woodwork to come get theirs. The couple did well – selling the tamales alongside other soul food like turnip greens, pig ears and sandwiches they’d make there. They also built a pushcart and take it around from one juke joint to another on Walnut Street, with the chant “One for a nickel, three for a dime. Sell a lot more but there just ain’t time.”

The folks that ran the Elm Street Tamale Shop did well – and their kids grew up and headed to Detroit for jobs. The shop stayed open through World War II. Eventually, the couple died from old age, and Joe’s two brothers bought it back. They ran an Italian deli in the same spot for 10 years – still serving those tamales. 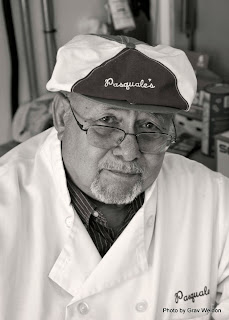 Joe, on the other hand, went into the insurance business – and then into the ownership of a beer business he ran for 20 some-odd years. When his brothers folded up their place, that was it for tamales for a while. But there was a day when Mammie Davis (Joe’s maid) and Joyce, Joe’s wife, got a hankering for tamales. They got out the old recipe and started working those tamales and made a mess of them. Joe got home and had some, and they were good. Joyce said there was a real need for these tamales and they should start making them again. So they did, in the kitchen at the beer factory. And – long story short, Joe restarted the business – except this time, it was just all about making the tamales. His daughter-in-law Rhonda had done research, and had found that Joe’s dad Sam’s original first name was Pasquale – which he didn’t care to share, since it sounded so foreign. Thus was born Pasquale’s Tamales.

And Joe got a factory going. Oh, the operation started off first as a hand-crank deal with a lot of labor involved. But then the St. Columbias purchased a mechanical extruder and conveyor belt system, and they started making tamales in batches of 200 dozen. It was something else.

They got a restaurant going that sold Italian dishes alongside tamales. They worked like mad, putting in 18 hour days. Tamales got hot in the region again, and they just kept going and going… until Joyce had a heart attack. And Joe came to the realization – though the tamale factory and the restaurant were going strong, both took a lot of their time and efforts. And as Joe puts it, “all the money in Phillips County wouldn’t be worth it without her.” 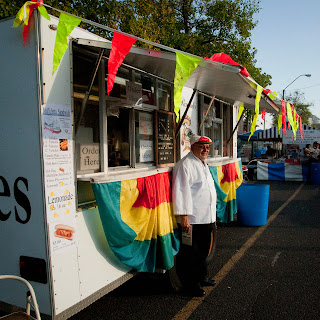 And the dust settled. Joe sold the tamale factory to a guy who – well, he had a heart attack, and Joe bought it back. He pared the operation back a lot. He stopped doing mail-order sales of tamales and got the cart and just did tamales two days a week, on Fridays and Saturdays.

And that’s where you’ll find them today, alongside Highway 49 two days a week, usually selling every tamale they have before the day is done.

It’s no wonder. There are no preservatives in these golden tubules of gastronomy… er, these tamales. They’re made from finely ground cornmeal, chopped sirloin, fresh garlic and onion and a plethora of spices, steamed up in corn shucks and served hot. Everything’s all-natural – no fillers, no lard, no bull. Well, the sirloin…. 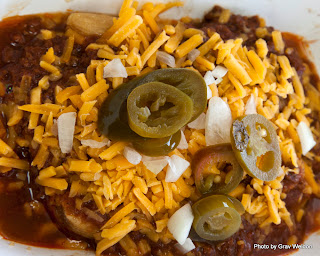 Now, used to be, every single tamale was hand-wrapped in a corn shuck and tied with a bit more corn shuck that had been tied together. Have you ever tried to do that? It’s not a quick thing. One day Joe came up with the idea of using a kitchen-friendly product that was similar to an elastic band like you use to pull back your hair… it’s usually used to truss chicken legs, but Joe found it worked just as well for tying tamales without taking away any bit of the goodness. The corn shucks? They’re still tucked tight. Those tamales are extruded, shuck-wrapped and tie-banded – and when they’re cooked, they’re cooked up together in what becomes the most amazing juice imaginable, a soup of spices and the flavors of corn, cornmeal and beef all together. When you order a sack, you get a cup of the juice to take with you. Just pull the tamales out of the box, put them in a dish and soak them back with the juice, and they’re just as good as when you pick them up from the stand. 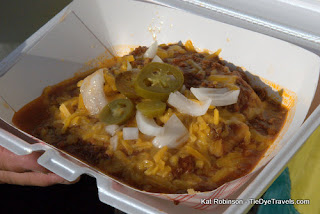 They are so good, in fact, that longtime Arkansas TV personality Chuck Dovish, back when he was the Travelin’ Arkansas guy for Channel 11, told the audience that the tamales were “shuck-suckin’ good.” “You have to be real careful saying something like that,” Joe told me. From that segment, the tagline of “suck the shuck” was born, and folks around here know you’re talking about Pasquale’s Tamales when you say those words.

Check out www.sucktheshuck.com for more information about Pasquale's Tamales.