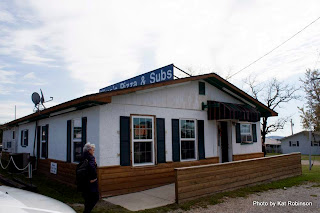 On the other side of the famed Cotter Bridge, past the Cotter community, you’ll find Gassville and a little pizzeria that’s claiming big honors.

Nima’s Pizza opened in the 1990s and served its community well. In 2003, it was purchased from its original owners by a Las Vegas couple, and within a few years, it gained international notoriety. Rick and Jane Mines loved visiting the Mountain Home area and decided to retire there, as well as purchase Nima’s with no restaurant experience. They learned, though, and utilized a collection of premium aged cheeses, oils from the Devo Olive Oil Company in Branson and recipes that required a wait—doughs that take more than a day, well-developed sauces and four-hour roasted peppers.

Let me reiterate-- Jane and Rick never made pizzas before.  I'm not joking.  They were coming to Arkansas to retire.  In fact, they had a farm with horses -- and they day Rick heard about the chance to purchase Nima's -- an already established pizzaria -- he called her and told her to clean up from being out with those horses and come into town.  Once they bought the place, the seeds were sown for what was to come.

They started winning at the International Pizza Challenge in Las Vegas in 2008 with a blend of four cheese under fat slices of tomato with Italian herbs -- good enough for a runner-up prize.

The next year they did the same with a sausage and marinated tomato ring pie.

All their hard work paid off in a big way in 2010, when Jane and Rick took their pizzas back to Las Vegas for the International Pizza Challenge. They came home with the title of #2 Best World Traditional Pizza, right behind a chef out of Italy.

They’ve proved it’s no fluke, with good showings over the past few years and another #2 in 2013. The winning pie for this past contest was a simple one baked on a day-rise crust, with a layer of thin sliced black pepper–laced Italian ham covered by a light sauce and then a lattice of roasted red peppers filled in with a five aged-cheeses blend. Simple, yet popular.

Take for instance the taco pizza. It’s spiced ground beef and tomatoes, onions and jalapeños with cheddar and Colby cheeses on top of even more cheese, and it’s a sight better than most any other taco pizza I've ever had.

But there are others.  On my most recent visit, I captured the following:


The Mines do believe in the concept of families enjoying pizza together, and they make a special “family sheet” pizza. It’s a seventeen- by twenty five-inch pizza that comes in twenty-four square slices, and it fills the box.

The restaurant is not large... just one room for dining and one for ordering.  They also sell pastries -- including big fluffy cupcakes and marvelous chocolate chip studded cannoli.  Drinks come from a vending machine.  What's it like inside?

The restaurant has now been in operation for 10 years.  On my latest visit, the folks from PizzaTV.com were taping -- and Rick and Jane were presented with this special recognition.  Next April, they're going to compete at the World Pizza Championships in Parma, Italy.  I have no doubt they'll make Arkansas -- and the United States -- proud.
Check out their website and head on up.
To purchase this article, email Kat Robinson at 10/24/2013 07:00:00 AM