Do Up Your Deer. 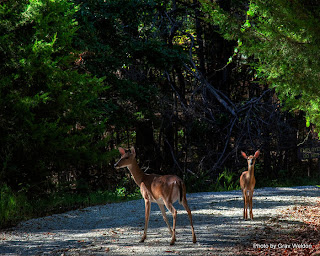 November is apparently the best month for me to share recipes, and on the request of KARN’s Dave Elswick I’d like to share some of the recipes I’ve used with venison.  They’re a little off the beaten path, but they do offer a different take on the animal -- and after all, if you take a deer, you’ll have quite a lot to deal with.  At Dave's request, I'm also including recipes called in by listeners.

I love this recipe for Venison Stew.  It combines deer meat with red wine for a nice, deep flavor best served when the weather is cold.  It also has mushrooms, which I love.

In a cast iron casserole or Dutch oven, sear the venison cubes.  Add the mushrooms.  Mix the remaining items and add them to the casserole.  Set in the oven at 250 degrees and allow to cook for four or more hours until the venison cubes fall apart.  Can also be made in a Crock-Pot, just sear your venison first.


Venison Philly Cheesesteaks
For this one, you want a meat slicer and a nearly frozen deer roast -- or when you get your deer butchered, ask that your deer roast be sliced wafer thin.  You’re looking for cross-section slices no more than ¼ inch thick.

Bring skillet to medium high heat.  Saute peppers, onions and garlic until onion is translucent.  Add venison and Worchestershire sauce.  Cook for one to two minutes or until cutlets are cooked through but still moist.  Add salt and/or pepper if you like.  Remove from heat but do not drain.  With tongs, drop meat and vegetables into rolls on top of cheese.  Serves 2-4, depending on how hungry you are.


I talked about cooking venison in a medieval fashion on the show.  Here's a great recipe on the Gode Cookery website for Venyson in Broth, or more properly Venison Ribs in Wine.

John Philpot called in with this great venison recipe.  He and Phyllis Speer hosted "Arkansas Outdoors" on AETN for 20 years, and they always had great things to share and eat.  John says this is the most requested venison recipe they had.

Trim any fat off the meat and rub the mixture onto both sides of the steak.  Place it in a shallow glass pan and cover it tightly with plastic wrap.  Refrigerate it at least overnight.  It's better if you give it a full day -- and 36 hours is still all right.  Every 12 hours, turn the steak over.

Get a charcoal fire burning, and once the coals are covered with ash put that steak on the grill six inches from the heat.  Flip it once while it's cooking.  Give it 25 minutes for rare or 30 for medium.  Slice it up and serve it.

John says you can slice it with a fork.

Not a deer recipe, but John also gave this recipe for Mexican Eggs.

Crumble the sausage in skillet, brown it and drain it.  Add the onion, pepper, garlic and cumin and cook until the onions are soft.  Add Rotel and, if you like, salt and pepper and cook it all together.

With a large wooden spoon, make four little wells in the mix.  Break an egg into each well.  Cover tightly with a lid and cook until the egg is firm.  Sprinkle the cheese over the whole mess and let it cook until the cheese is melted.  Makes four servings.

John says Phyllis would crack the eggs in gently so they'd cook up where the yolks were still whole and runny -- but you can beat the eggs first if you wish.

One of our listeners, Fred, told us about a breakfast treatment for tough deer meat.  Take cubed up meat and throw it in a crockpot with garlic, black pepper, onion and white gravy.  Let it simmer all night long and serve it up the next morning over biscuits.

It's similar to what parts of my family has been doing for years for breakfast...

Heat skillet to medium high.  Drop in a stick of butter to coat the bottom.

Get yourself a meat mallet and pound the holy fire out of the deer steaks until they are less than a quarter inch thick.  Sift together flour, salt and pepper.  Dredge deer steaks in flour.  Drop steaks into the browning butter and cook for a minute on each side or until golden on each side.  Remove steaks.

Add second stick of butter.  Whisk in remaining flour and continue to whisk until roux becomes the color of chocolate milk.  Serve over biscuits or grits.

Listener James called in with a different recipe -- for duck rather than venison.  Sounds good, too.

Take duck breasts and butterfly them.  Marinate them overnight in a combination of the soy sauce, Worchestershire sauce and vinegar.  Next day tuck cream cheese and jalapeno slices inside, fold over and wrap in bacon.  Cook to medium heat.

Alas, I didn't get the name of our last caller, but he gave us these instructions for Venison Tenderloin.

Pierce the tenderloin with a knife.  Slide pieces of carrot and celery at intervals into the tenderloin.  Add marinade, wrap tightly and marinate overnight. Bake in aluminum foil for three hours at 350 degrees.

And then there was the contribution from Grav Weldon, who has become pesce-vegetarian but who still loves to hunt.  He referred me to this recipe for Venison Shepherd's Pie.

Have a venison recipe you'd like to share?  Add it to the comments!
Told by Kat Robinson at 5:14:00 PM