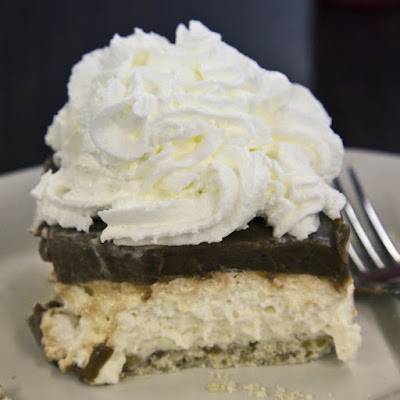 Sometimes the best things are found at the most simple of places. This chocolate torte was discovered by chance at a little convenience store-grocery-hardware store between Prescott and Magnolia, just because I needed a road break.

Went in to use the facilities. Came out and was told I needed to check with the lady behind the counter. It was after 3 p.m. and she'd already sold out of her other two pies of the day — but would I like a piece of chocolate torte? Well, of course I was.

And what was this chocolate torte? Let me tell you what... it was almost exactly what I have encountered elsewhere in the state as Possum [ie, the casserole pan version. Pecan sandy crust, a nice thick layer of slightly soured cream cheese, a thick chocolate custard and whipped cream on the top. The only thing it lacked from the traditional Possum pie was the sprinkling of pecans on the top.

It was fluffy, too, and that was splendid. It was eaten quickly with relish (I mean, I relished it, not that I put any relish on it) and remembered fondly. And it was found at a little spot in the road called Barr's Junction, the only store in the entire little community of Rosston. There you go.