Gibbs Grocery and Hunters Outpost south of Sheridan has been the place where hunters prepare for modern gun season in the area for 36 years.

Used to be folks from all around central and south central Arkansas would migrate to one particular area the morning of the start of deer season.  They’d come by truck, some with four wheelers, all with their hunter orange and their guns and line up dutifully at checking stations like Gibbs Grocery and Hunters Outpost for the annual right of passage -- registering their first kill of the season.

Some would have bucks in the back of their trucks, other does.  A few lucky guys might have two in the back, ensuring the deep freezer at the house would be full for the winter.  Once they’d parked they’d come up and go find someone to register the kill for Game and Fish and then head off to get the deer processed or to butcher it at the house. 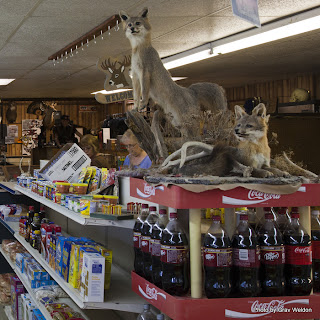 It’s a little different these days.  This, like the past couple of years, will be a lot quieter for the Gibbs and their kin at the little store south of Sheridan.  Sure, there will be all sorts of folks coming through at oh-dark-thirty in the morning to pick up a little breakfast and maybe some pimento cheese for later in the day, but since Arkansas Game and Fish put the registration of taken deer in the hands of the hunter with online and phone registration, there’s no need for the grand display of deer huntery that had happened before -- no trophy shots, no big brags, no photographs, just maybe an email here and there later on down the line from a victorious trip to leased lands along the river bottoms.

Yet still Gibbs Grocery remains and even thrives, with a fresh coat of bright green paint and the ever-buoyant attitudes of its staff.  It’s a place for family.

The Gibbs bought themselves the place along Highway 167 South some 36 years ago, when their son Alan was getting ready to go into the second grade (and when I was about, oh, two years old).  They offered a place to get some gas and a quick bite for down the road. 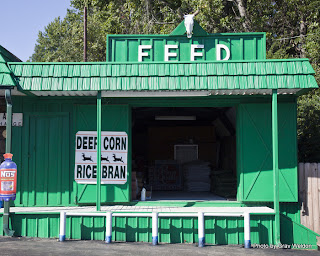 But the place grew.  Buddy and Barbara got the place up and going and added in the feed and seed, the various camouflage apparel, the scopes and guns and whatnot.  Taxidermied examples of what could be found in the woods out that way were brought in, mounted and displayed on any available surface.  Buddy’s son Alan grew up and started his own business, Gibbs Archery Manufacturing, which took off on its own and whose Easy Sling has become one of the top selling bow slings in the world.

Over the years, Gibbs has seen its biggest boom over two days in November -- the day before modern gun season and the day it starts.  It never fails -- the Friday before the start of the hunt folks come in from everywhere to provision up, grab a bite to eat and get their license for the year.

That particular Friday usually starts off around five in the morning.  There’ll likely be a few guys already parked out front, waiting for the store to open to get their cup of coffee and their license for the year.  Some will sit at one of the little yellow booths in the middle of the store and start swapping hunting lies and big buck stories. 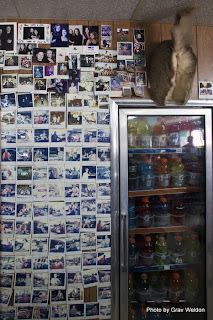 They sit in an environment wallpapered with hunts of the past.  When this place was still a checkpoint for Game & Fish, Polaroids were taken of just about every trophy deer, turkey, boar or duck.  The Polaroids are beginning to fade, though.

We dropped in at Gibbs Grocery for a bite and noticed one thing right off the bat -- since last year, the Gibbs have painted the exterior bright green.  Inside it’s not much different, though amidst the stuffed deer heads, foxes and the eponymous deer butt on the wall there was spotted the head of a small T-Rex.  We hope that’s a joke.

Sat down for a quick bite to eat before the next stop, which my photographer was just snapping away.  The girls behind the counter looked at him for a moment, but paid him no mind.  Miss Barbara, on the other hand, made fit to comment about the action.

“You shoot a pretty camera,” she said.

“Yeah, I was wondering just what it was like around here on opening day,” he asked as he took another shot.

“Y’all aren’t from around here?” she asked.  When he replied in the nugatory, she started on about all the hunters that would stock up here.  “We get people that come back every year, only right the day before.  It’s like family.  They always come back.”

I noticed that in amidst all those Polaroids there were now emails taped to surfaces like the walls and the deli counter.  “The internet makes it different, I bet.”

“They don’t bring them deer here any more, no, they go do that on the computer or the phone now,” she told me.

We ordered a snack… my photographer choosing a Lemon Icebox pie.  I wanted a slice of pecan pie but moreover I wanted some of the pimento cheese from inside the deli case, and Miss Barbara obliged.

We went and picked drinks out of the cooler, but when I started to offer to pay she waived me off.  “You can pay whenever, as long as you pay before you go.  I’m a pretty good shot,” she said, indicating she could pop off a couple of rounds at a deadbeat customer from the counter to the edge of the parking lot. 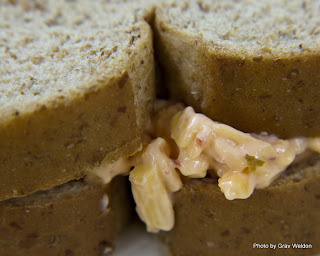 Over that marvelous old-fashioned pimento cheese on wheat, we chatted back and forth.  She told me people still came out right before hunting season began, but it’s not like it used to be.  “There’d be people lined up all along the road back a ways, waiting their turn in.  It was like homecoming.”

“Do they still do that?”

“Not as much, but they still come.  Day before the season we’ll have our busiest day of the year.” 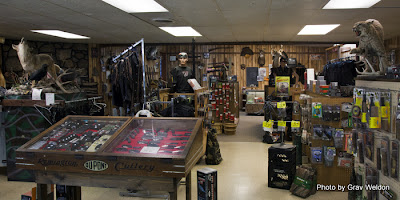 We shopped around a little while we were there and found all sorts of stuff beyond the convenience and grocery store up front.  There were all sorts of displays of things like Remington knives, duck calls, gun scopes and various guns.  There were also motorcycle leathers, bags and feathered leather vests.  You honestly could fuel up, dress up and dress out for a real adventure here.

When we were headed out the door, Miss Barbara hollered after us.  “Y’all comin’ back for hunting season?” 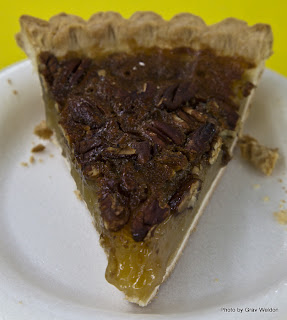 “I think we just might,” I hollered back.  And you know, I think I will.  I want to see what it’s like right before the big day.  I want to hear some of the tales that will be shared over hot coffee and sausage biscuits and pimento cheese, and see if whomever got that deer butt stuffed and mounted will be back to explain that particular sense of humor.

I know the place will be packed, no matter what year I return.

Technology and the internet has changed the nature of the hunt over the past decade.  Instead of the check points around the state a decade ago, today checking a kill is just a click or phone call away.

Steve “Wildman” Wilson of Arkansas Game and Fish says it’s been a logical progression.  “We started out changing the system by allowing certain deer camps to check their own deer, before we all had computers.  Now they can call in to Telecheck (the AGFC hotline phone number), they can go online or even now, there’s an app for that.”

Has the change affected the number of deer taken each year?  “It’s actually gone up.  We think the new system is easy, it’s what customers want.  Most people comply now, we make it so easy.  It’s also helping us gather statistics easier, year to year.

“It makes it easier for us to set special seasons, too.  Used to be, with all those checkpoints out there, our guys would visit every one of them and get done with everything about the time it was time to hunt again.  Now we can make a better determination on when to schedule hunts.

“We have a special hunt this year in several zones, a doe-only hunt before the regular season.  We’ve determined from the numbers that there’s too high a doe ratio down in those areas.”

You can learn more about how to check your game by visiting the Arkansas Game and Fish Commission website at www.agfc.com.  There you’ll find the link for online checking and a link to the AGFC game checking app.