The Sound of Horns. 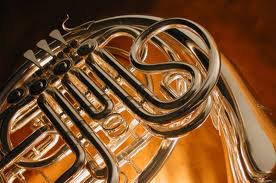 I wrote this piece last year for my syndicated column... and the other day passed by a rehearsing marching band, which reminded me I hadn't posted this piece here.

I was winding my way down Highway 25 and absorbing the cool spit out by my vehicle’s air conditioner.  It was grow-some-gills hot outside, and I needed a big glass of iced tea and an igloo in the Artic something fierce.

Coming around a corner, something caught my eye -- out in a front yard, a guy playing a trumpet.  A teenager, I guessed, wearing a sleeveless shirt and shorts and flip-flops.  One movement of his foot, I knew what he was doing.  He was preparing for marching band.

Miles down the road, I still had that image in my head.  I’d been there myself.  I played French horn from junior high through college, and for seven of those years I was out in a field every August, trying hard not to pass out from heat stroke or bust my lip with the mouthpiece.

It’s a right of passage, anyone who plays brass or woodwind or drums.  While friends enjoy the final days of summer and get their stuff together for the first day of school, the typical band geek is already in the bandroom, picking up an instrument and learning how to roll step and hold position.  The first day with instruments sounds like a stomping of trains and wind, but before the instruments go out teenagers learn how to get six or eight steps from one five-yard-line to another, what hash marks are and how to keep an eye on the drum major while progressing.

First day of school, the knot of the band has already formed.  At some point each day kids are in the bandroom, learning the music and tapping toes.  When school buses take off with their classmates, they’re back on the field.

Students are matched with uniforms that may or may not fit.  Schedules are set.  Band parents get together and develop a plan for how to feed the kids on game nights.

I can remember how those practice days felt.  The last bell would ring and I would head down the stairs to the bandroom, open my case and pull out my horn; the way the flags would rattle in the wind as I passed the flag line on the way out to the field.  At Parkview, it was a treacherous course down to the practice field; we played our games at Central High’s field, so there was no need for stands.  It was over a berm and down a hill and through the gate onto the track.

I can remember hours spent standing “at attention,” instrument up and still as possible til someone would give in and move and the band director would holler.

Was it rough?  Always. In high school we trained for the perfect sound and the marching came second.  At Arkansas Tech in 1991 we were expected to know how to march, so it was all about sound.  And what a sound.  There would be this reverberation all through the air when we were at our best, that resonance between the 20 yard lines. Sometimes it was unbearably hot.  Sometimes it was damn cold.  Sometimes it was mucky; I recall one year where several of us left at least one white patent leather shoe sunk in the gloopy, pasty field after a hard rain.

The best part, though, wasn’t the music or the thrill or the quiet of the bandroom at night.  It was the people met, friendships forged, memories made and shared.  I met my best friend my 10th grade year.  He played French horn at a nearby junior high.  My band director went there to recruit, I went along because I was curious.  After the concert I searched out the lone horn player and talked with him.  A few weeks later he was in the bandroom at my high school, picking up his school instrument.  More than 20 years later, we’re still giving each other hell.

We don’t play anymore.  My last concert was back in the spring of 1994.  I’d switched tracks from music education to journalism, and I was about to get my wisdom teeth out.  I never played in a band again, though sometimes I pull my horn out and  see if I still have it.  I believe I do.

That kid I spotted with his trumpet might never take his music to the collegiate level.  Or he could end up being a band director.  Undoubtedly he has hard months ahead of him, peppered with bus rides and concession stands and the low roar of a stadium crowd.  I kinda envy the trip he’s about to take.