Have you ever driven somewhere just for pie? Well, yes, I do that — but usually I get something else to eat along the way.
This time around, no go… I was already stuffed. I was working my way through the Fayetteville-Springdale area and had already consumed portions of four other slices of pie and half a burger at other establishments visited. I shouldn’t have been hungry. The game plan, as always: take two bites, put it in a box.

Except at Neal’s Café in Springdale, I just couldn’t. That pie dun got ate.

Nope, didn’t make this trip on my own. My photographer and I had six destinations and seven pies to hit that day, playing catch-up for vacation time. My Texas journey and his Alaskan sojourn had taken precious time from our important and time-cinched search for the best pie in the state of Arkansas. We had to cover ground quick.

We’d already tried the coconut and chocolate meringue pies at Mama Z’s in Tontitown and the strawberry chiffon and Awesome Possum pies (and lunch) at the Front Porch Diner in Springdale and still had to hit Feltner Brothers (not for pie but a check-in to the new College Street location), Sassy’s Red House and Greenhouse Grill in Fayetteville. So yeah, we were watching our consumption.

Still, Neal’s Café. Pink. Old fashioned in a very Lodge-meets-Automat sort of way. Did I mention it was pink? Wood topped tables. Big deer and elk heads on the wall. And a pie case on a counter in the center back of the room…

So, the menu actually gives a little history, which didn’t help my growling stomach. As I mentioned, I’d already had lunch and bites of four pies. But hearing that this place was known for its pan fried chicken… I wanted to try it and I couldn’t. I couldn’t risk not being able to sample all those pies and I didn’t want to explode along the way. Made me sorta sad.

So, turns out the place has been open since 1944 and has been in the Neal family all that time. Their motto is “Serving the Best of Better Foods.” It’s a timewarp. A lovely, lovely timewarp.

Those pies, though. At first, from across the room at least, the pies looked as if someone had piled meringue atop those Peeps chicks. Big tall peaks. Closer in they were more marvelous, big tall peaks of perfectly toasted meringue.

We asked which was the favorite flavor and got a list. We passed on the Tropical pie, which is bananas and coconut and pineapple together, and went for the Lemon Meringue. And I tell you, it’s a rare thing to see such a pungent yellow meringue anywhere. It’s piquantly lemon with substance and heft, a thick deep yellow custard that clings beautifully. The custard was topped with an equally texturally thick meringue with the most beautiful toasted top on it. The crust: folded flour, barely flavor but built on those tight thin layers for the perfect cut. 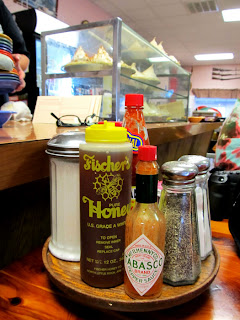 See, this is a pie you wouldn’t want to see mangled. Because of that firm custard, tight meringue and layered crust, you can get a perfect slice every time out of one of those pies. Every one of the pies has six perfect peaks, and each slice contains one of those peaks. Beautiful. Tops as far as diner pies ever go.

I would have liked to had the fried chicken, and I bet I will before I die, I’m certain of that. I settled for the pie and for encouraging my photographer to try one of the ancient and odd Cajun Chef brand sport peppers (which to this point I thought were a Chicago thing) from the on-table set-up, which also included North Little Rock’s own Fischer Honey.