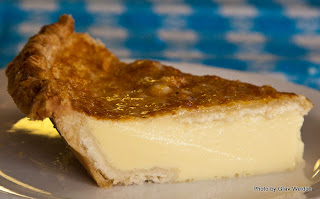 Big families aren’t the norm any more.  Used to be a family of ten or more would be common -- since families needed to be big to run big homesteads and the like.  Not these days.  As a mom in a single child family, I’m kinda the standard there.

How about a couple that had seven kids just over a year after they got married -- and then went on to have 14 more?  No, it’s not some sensational crazy multiples story.  It’s the story of the Jefferys out of tiny Casscoe, AR.  George and Girstine Jeffery started off shortly after their marriage as surrogate parents to seven children.  They then went on to build their own family, having ten girls and four boys along the way.  Girstine was known as “Dew-Baby,” and it’s after her this little restaurant in Stuttgart is named.

I went on a Friday to seek out something fantastical -- an egg custard pie of some renown.  I was very happy to see it on the menu.  Egg custard is one of those great cultural pies that doesn’t seem to ever have caught on with the frou-frou set.  It’s very pedestrian, very rural… and very comforting.  A good egg custard pie is filling, too.

We pulled up to the well-used building on Michigan Street (next door to, of all things, a gyro shack) and went on in.  Dew-Baby’s is two separate dining rooms… the one you walk into with the counter and the buffet bar, and the one on the side where the restrooms are.  It was 11 o’clock dead on and we were apparently the first customers of the day. 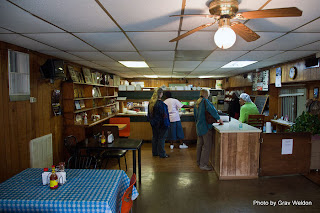 I talked with the ladies a bit before ordering that pie.  They’re all daughters (and one daughter-in-law) of Dew-Baby, and they work together lovingly.

Thing is, even though I was planning to dine somewhere else (I had a busy day planned) I couldn’t resist the scent that struck me when I walked through the door.  Fried chicken.  Pan fried chicken at that, the sort that comes from a cast iron skillet.  Oh, I was having lunch.

I asked for dark meat chicken with my meat-and-three ($7.25) -- and the two sisters working the counter that day mentioned they always preferred the breast meat, I suspect since they make theirs nice and juicy -- but I got my dark meat chicken and three sides.  I chose French fries, baked beans and a pre-made lettuce-based salad that had a number of items in it.  My other choices were corn on the cob and hush puppies, and fried catfish for the main course. 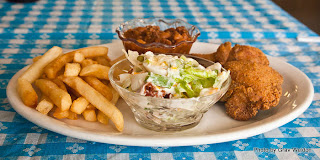 And of course I ordered up that egg custard pie.  I was going to have me some of that.  Desserts are $2.50 each, well worth it.  The other choices that day was sweet potato pie, Pineapple Upside Down Cake, Chocolate Cake and Cream Cheese Cake.

My photographer and I had a seat while we waited for the plate to be made up.  We sipped briefly on iced tea before one of the sisters brought the plate to the table.  It smelled heavenly. 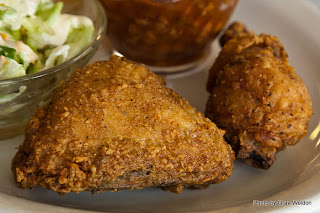 The fried chicken… okay, we’re going to have to put some debate to this.  I have eaten what I thought was the best fried chicken in the state -- which has been either at AQ Chicken House in Springdale or at the Monte Ne Inn Chicken Restaurant.  This chicken… wait for the blasphemy here… was BETTER.  It had the tenderness and flavor of being buttermilk-soaked, a very light bit of spicing that I felt had to have included some lemon pepper, it was juicy, it was flavorful, it was tender and it was golden.  And yet still it was nothing in comparison to the pie I was about to receive. 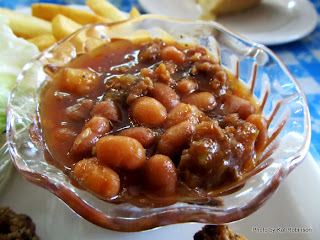 The side dishes were odd but good.  The baked beans were of the same sort you normally find in Pork N’ Beans but were flavored instead with brown sugar and ground beef, almost identical to the Settler’s Beans my mom makes each Thanksgiving.  The fries were about average.  The prepared salad was interesting -- bacon (which I avoided), shredded Cheddar cheese, iceberg lettuce, cucumber, slices of hard boiled egg and English peas in what tasted like a version of Miracle Whip. 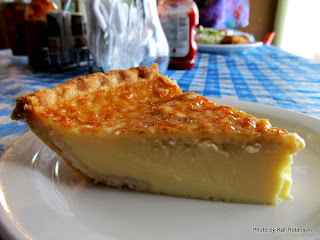 And then there was the egg custard pie.  It was pretty.  It had sliced clean, indicative of a balanced hand in its construction.  It was substantial… I mean, well, it’s like eating an omelet as far as the cholesterol and calories go, frankly.  But I tell you -- I was won over by three facts.  The pie was created with a homemade, folded over flour pastry that was slightly salty.   The custard was homogenous and perfect -- very firm and very smooth.  And the top had been browned to an almost crème brulee perfection.  I have yet to find a better pie. 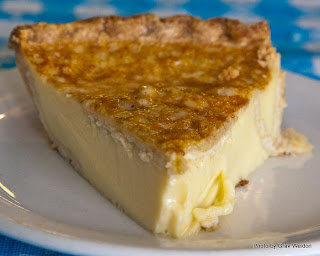 We talked with one of the sisters, who came over to talk with us about The Lord and how He takes care of us, no matter our troubles.  It was a bit of good conversation to have while enjoying a good meal, and we saw it repeated with the only other first-time visitor who came in the door.  Regulars they all greeted by name, asking about families and how work was going and all sorts of things like that. 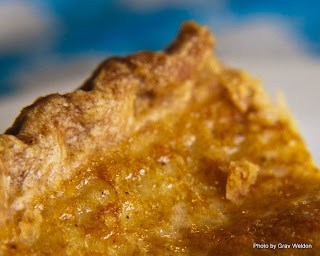 We had to finish up and get on the road, but I made a note I need to return, probably on a Tuesday when all the vegetables like the PurpleHull Peas and such are out.  I was thrilled to finally find a really great restaurant in town, and I’m looking forward to going back and hearing more about this neat family.

Turns out there’s a book on the matter called “Ten Sisters” by Rose Stovall, one of the sisters, a collection of stories from each of the sisters about their mom and dad and growing up in Casscoe.  I’m going to seek this book out and read it.  I think it might give me more insight into life in the Delta.