The glorious goodness of Hunka Pie. 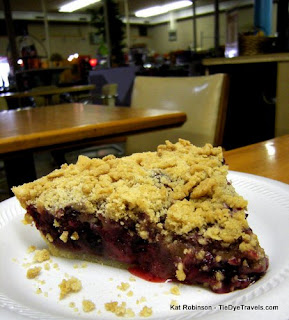 See, I could start this off so many ways, but I’ll start this way — the worst thing about Mondays for me is the fact I can’t go get my favorite pie. Seriously. Though honestly, Chris Monroe hasn’t always baked that pear-ginger pie and I don’t always get over there when he does.

Of course, I’m talking about Hunka Pie, the eclectic little pie shop inside the equally eclectic Galaxy Furniture in Argenta. I don’t get there as often as I would like, but I try to nab a picked up slice any time I hear someone’s heading into the area. I have about eight favorites, to tell you the truth, including my new one above. More honesty — I’ve tried a whole dang lot of the pies Chris has produced, and I haven’t found one I haven’t liked yet. I’m sure if he tried really hard, I might. But I doubt it.

See, Chris has been blessed with this talent to create some fantastic pies. That Blackberry Pie (up there on the top of this article) was a real surprise to me — not because it was good, no sir. I went in with my friend Suzanne the other day, and she was cruising for chocolate. I almost went that way myself, but I had to try the Blackberry because frankly I love blackberry. Chris has managed to create this perfect blend between a French-style crumb crust and the best parts of a blackberry cobbler. He even heated it up a little, too. 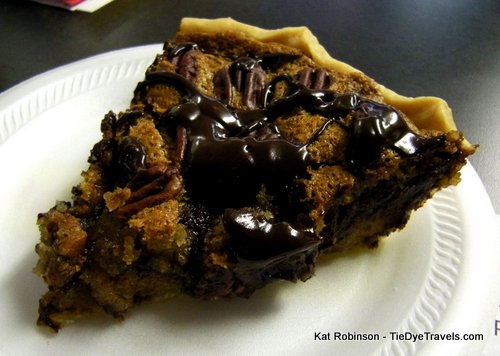 Suzanne hadn’t been to Hunka Pie before, and she seemed to really dig the Chocolate Peanut Butter Pie she chose. It looked and smelled awesome. While I snapped pictures I wondered if I’d chosen poorly. But that’s the thing — Chris always has a whole lot of choices — unless you go right before he’s sold out, then he’s down to just a few. I’m rambling. 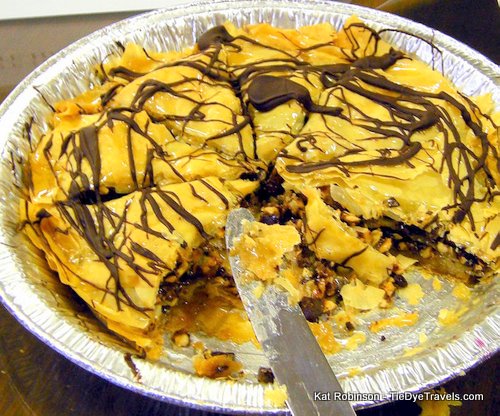 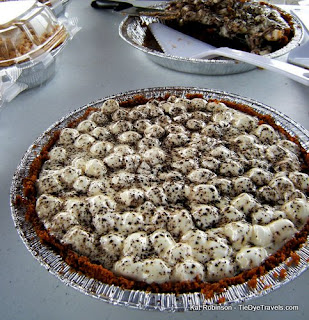 I keep running into him places, too. He does tastings during the Argenta Art Walks, and that’s where I’ve done most of my sampling. French blueberry, French apple, a lot of other things Frenched — he has a great crust going and it’s fabulous. But he does some strange things too, such as his Chocolate Hazelnut Baklava Pie. Inspired. Really, it is. 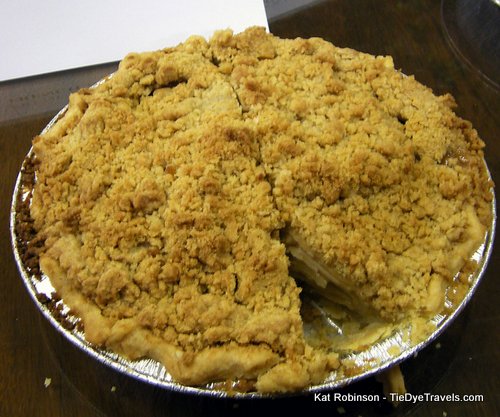 Outdoor events, too. I first fell in love with that pear-ginger tart at the Argenta Foodie Festival this summer. I loved the firmness of the pears, the smart snap of fresh ginger and the flaky crust all together. I also tried the Sugar Cookie Dutch Peach Pie (what you see pictured right there) — so damn decadent with all these great textures. Fan-freakin’-tastic. 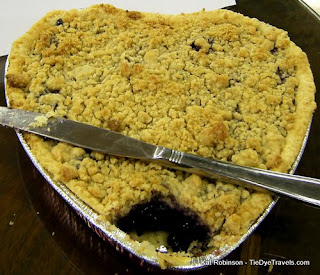 Here’s the thing, though. I eat a lot of pie (no, you’d never have guessed that, would you?) and there’s one big difference between Hunka Pie and other pies. That’s the texture. Chris adds texture to taste to create a unique and tasty product, hands down. I love the balance between crunchy fruit and crispy topping, between custard in some pies and the crust of others. You never get the same roster of pies from day to day. If I lived on that street, I’d be about 10 feet wide. And broke. 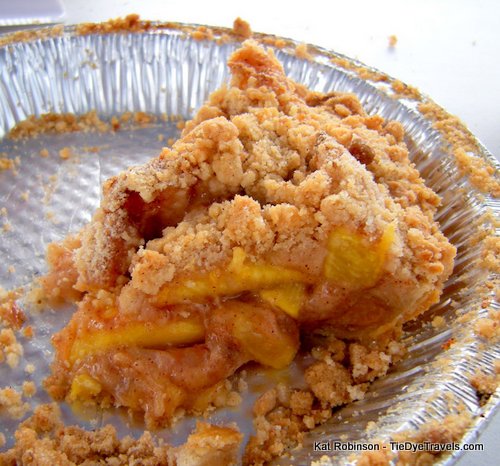 As it is, Hunka Pie is a rare treat for me, one I only afford if I go to Argenta. Though, since Chris usually has a lunch special going on, I should make it over there more often. I should.

You should, too. Check it out inside Galaxy Furniture, on Main Street half a block north of Broadway. Or check out the Hunka Pie Facebook fan page. I bet if you make a request Chris would probably come through.
Told by Kat Robinson at 11:24:00 PM