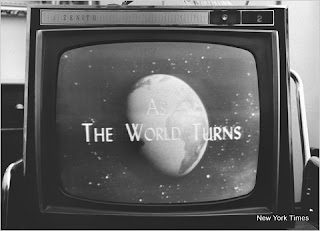 “Good morning, dear.” I wonder what the reaction was to those very first words spoken on As The World Turns by Helen Wagner that afternoon in 1956. Did the handful of housewives blessed to have a television on look up to see what was on the screen? Could they have known that the series would last more than 50 years?

As The World Turns is, for the moment, the longest continuously running television soap opera in the world. That will end September 17th - and the BBC’s Coronation Street will take up the crown, so to speak. Many have wondered if Wagner would speak the last words of the series -- but she passed away this May and her character, Nancy Hughes, was announced as having died in her sleep on the show. 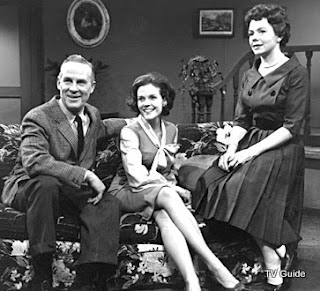 It was also the first of the half-hour serials; before ATWT all soaps were 15 minutes in length, and the show premiered just three hours before the second one, The Edge of Night. It would eventually go to a full hour in the 70s. The continuing story of the Hughes’ and the Snyders in Oakdale captured the hearts of thousands of fans.

The end of the soap, though, is just another symptom of change in the way we live, how we’ve changed as a viewing nation. My mother recalled to me how the first notes of a certain soap opera theme meant naptime -- for the next two hours, my maternal grandmother would be taken away to Another World (or As The World Turns, in this case) and leave behind the drudgery of housewife life. The whole day was structured around those soap operas -- when to do the washing, when to serve lunch, when to put the smaller children down for a nap.

A friend of mine related being shooed out of the house each day at 12:30 to go play in the summer heat, not to return until a favorite serial was over. He told me how it was essential he not bother his mother until after the soaps were over; the rule of thumb was not to fetch her for any reason unless he was bleeding more than a Band-Aid would hold in a few minutes.

My mom was a working mom, and I never really saw her get into daytime soaps (nighttime soaps were another matter -- I recall quite clearly how nonplussed she was that my brother Zack decided to alert her he was on the way in the middle of Dallas) but my paternal grandmother was quite devoted to Days Of Our Lives on the other network. When I was in her home, it was quiet time, and I’d better play quietly with my Lite-Brite and not make a peep. 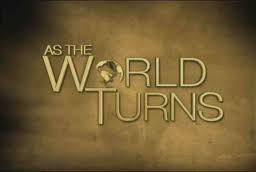 I didn’t understand the allure when I was small -- the drama didn’t have much to do with an Arkansas girl growing up in the big city. But I did get hooked in the summer of 1987. I watched as I rode a stationary bike, eager to be more fit when I returned to school in the fall. I watched KARK -- first the news at noon and then Alice and then Days. Perhaps I was not meant to be a soap opera viewer; that was the summer of the Ollie North hearings and several times a week the soaps would be pre-empted by testimony from Capitol Hill. After that, I stopped trying to catch the stories.

With our on-demand, video on request sort of world, few have the time to carve out that hour each day. It’s not just soap operas -- I saw audiences erode from our broadcasts over my 12 years in television news. Who has time anymore to wait for a show when there are so many other ways to be entertained?

Guiding Light went out last September. Once As The World Turns ends, there will be just six daytime soap operas on the Big Three networks, half of what was on in 1990. Are we the generation that will see the end of the daytime soap? Will we be the ones who finally hear those last words -- “good night, dear?”
To purchase this article, email Kat Robinson at 9/08/2010 06:47:00 AM