Big Eatin' at Who Dat's.

I’ve had some recent travel in North Central Arkansas, and when I’ve asked people about where to eat in the Searcy area I have pretty much been told this: skip Searcy and keep on driving up to Bald Knob. And while I am sure Searcy must have its own culinary delights, I am glad I followed directions — because otherwise I wouldn’t have eaten at Who Dat’s. 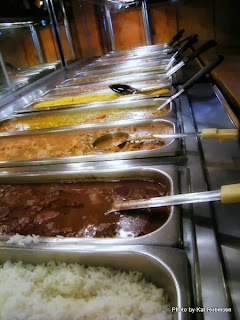 The fact that I haven’t eaten there before is a sad reality and almost inexcusable. As a recent college graduate in the mid-90s, I passed through Bald Knob every week or so when I’d come back to Little Rock from Jonesboro. Somehow I never stopped at any of the Bald Knob restaurants. Honestly, I wasn’t really aware of any restaurants past the ones at the gas stations near the Highway 67 freeway. I coulda been eating this Cajun food for a while now.

I dropped in one afternoon after a day of collecting information up through Batesville and Old Hardy Town. There were few people in at the time, but it wasn’t quite 5pm. The hostess seated me near the food bar.

It took me a long time to figure out to eat. Thing is, I wanted to try a decent amount of items so I could tell you all about them — but there was a part of me that was telling me how ridiculous that idea was. I mean, after all, it was dinner time and the food I was eyeballing was in the $20 range. Ah, what I do for you, dear readers. 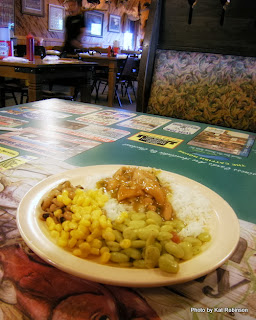 I made my decision and my waitress invited me to attend the food bar while I waited. Well, let me tell you what — if I hadn’t already committed myself to the dinner I had chosen, I’d have just eaten the food bar. Indeed, the bar ($6.95 if you order it by itself) isn’t just about salad, though there is a small salad station. It’s like a Sunday potluck buffet at a rural south Arkansas church.

I counted among the available options: white rice, red beans and rice with sausage, smothered chicken with Creole spices, butterbeans cooked with tomatoes, corn on the cob, blackeyed peas, green beans with bacon, barbecue baked beans, home fries, carrots, English peas, baked chicken and corn off the cob. I couldn’t resist picking up some of those butterbeans and a little corn and the smothered chicken. Heck, it’s research, right? 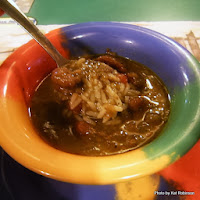 I had no more than sat down at the table when my waitress arrived with my first portion of my dinner, seafood gumbo. The dark roux held secrets of well-tempered crawfish, shrimp and tomatoes in its okra-thickened depths. I found it a little salty but nicely seasoned and decently savory. You can order it on its own, ($3.95 cup/$7.95 bowl) of course.

My favorite food bar item was indeed the butterbeans, sweet with those tomatoes and a reminder of why I love butterbeans so. The smothered chicken on rice would be nicely filling for a lunch… and makes the food bar an even better choice for those watching their budgets. 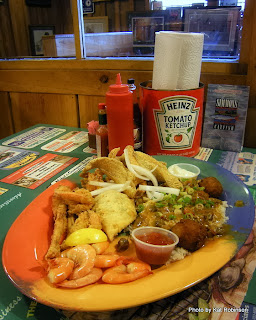 So I fiddled with my food bar plate a little bit after consuming the gumbo, afraid to fill up since I really had no idea just how much food would be on the Seafood Platter ($22.95). When it came, I was appreciatively impressed. I smelled it before I saw it, the heavy scent of spice and shrimp coming to me shortly after it left the kitchen. The repast was set out on a huge melamine platter: ample portions of fried shrimp, a couple of fried frog legs, three or four pieces of fried catfish… a whole lot to catalogue for you.

The first thing I had to try though was the Crawfish Etouffee. The massive portion of hot goodness on rice was calling to me. It was bespeckled by large chunks of green onion of all things, both as a topping and cooked into the dish itself. I was only put off by the idea for a moment; one taste told me I had nothing to worry about.

The sweetness of the crawfish dominated the dish, the onion added a nice bit of texture, and the seasoning snuck up and smacked me in the tongue a couple of seconds after each bite. I’ve had a lot of Crawfish Etouffee, both here and in south Louisiana, and I can honestly say it’s one of the best examples of the Cajun specialty I’ve ever eaten.

Of course there was more. There were the half-dozen delightful little pink peel-and-eat boiled shrimp. There were three slightly under seasoned but still decent breaded frog legs (yes, they sorta tasted like chicken). A couple of sweet yellow cornmeal hushpippies. A half-dozen light and still somewhat salty flour battered fried shrimp, four lightly flaky cornmeal-battered catfish filets in the four to five inch range, a surprise of half-a-dozen chicken-fried oysters underneath those, and a stuffed crab full of a meaty-sweet stuffing a little heavy on the bread but well balanced with the rest of the crab and seasoning inside.

No, I didn’t eat it all in one sitting. I barely managed to sample each item. In fact, long before my waitress came over and asked me about dessert I’d decided most of the dinner was coming home with me for later. It took two big clamshell boxes to contain what I couldn’t consume right there… and no, I couldn’t sample the bread pudding. I will have to go back. 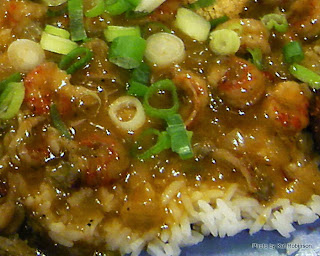 Who Dat’s has a lot of really big seafood platters on its menu. Some include wilder things like fried gator, snow crab legs, crab cakes and crawfish pie. They also do chicken in a variety of ways. And they do a burger I have to go back for. While I was there, a gentleman about halfway down the restaurant from me ordered up a hubcap burger. I saw it go by, its meat to the edge of the plate under a big, slightly flattened 10” (estimated) bun. Wow. The restaurant also offers overstuffed po-boys, a Chicken Fried Ribeye Steak (how’s that work?) and appetizers like Bacon-Wrapped Shrimp, Stuffed Mushrooms and “Topless” Oysters. I’m gonna have to go back.