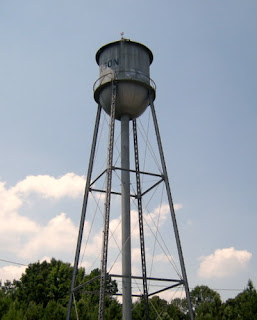 Emerson’s PurpleHull Pea Festival isn’t just about food and community, it has a lot to do with motorpower and sheer chutzpah.

Bill Dailey bugged me for years about coming down to the PurpleHull Pea Festival. Somehow, something would always come up and I couldn’t drive to South Arkansas for the weekend. But I wanted to go, and when I left television and started this blog I promised myself I’d make the attempt. 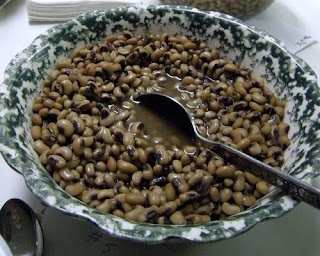 I finally got down there last June. I made special arrangements for childcare and left the house at oh-dark-thirty to drive on down through Sheridan and Fordyce and Camden and Magnolia to get there around ten that Saturday morning. Right on the highway in Emerson it didn’t look like much, but after I turned and headed west towards the school the traffic picked up. 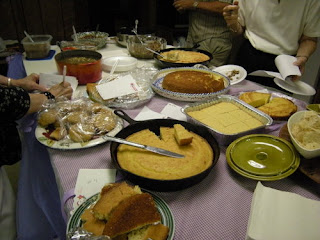 And at the school, there was nary a spot to be found that wasn’t full of car or kid or booth. I rolled down the street and parked on the other side of the gymnasium and got my stuff together. I wanted to see what this was all about.
Turned out I was further from the action than I anticipated. I walked back the way I came past the school 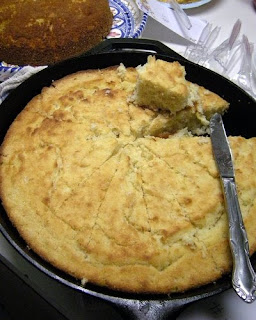 and a block and a half further to the church where the Great PurpleHull Pea and Cornbread Cook-off was being held. Around the back of the church I found the entrance and discovered that judging had just about concluded. While I was unable to sample as a judge (not that I’d been asked, but you know me, I would have offered), I had come at a great time for sampling.

As the winners were announced and trophies handed out, I wandered back and took a look. There were easily a dozen different cornbreads, vary 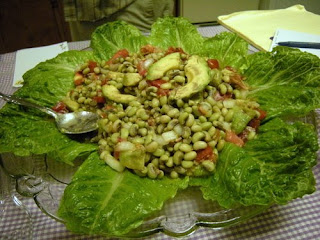 ing in color from white to brown to brilliant yellow, each with its own shape in a dish or piled on a plate. Nearly a dozen dishes of traditional PurpleHull Peas were out on the end, and on the 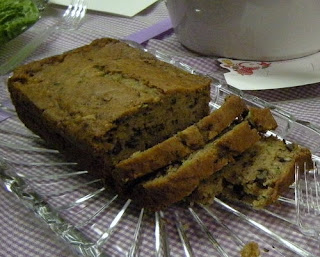 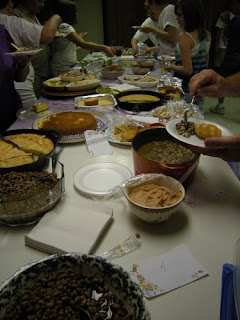 The entrants and fans swarmed the table after everything was done, and plates were dished out for everyone to take and enjoy what was there. Linda Miller and Bill Samples, the winners in the PurpleHull Pea and Cornbread categories, posed for pictures. We all ate. And darned if it wasn’t all just good stuff… I even liked the bread. 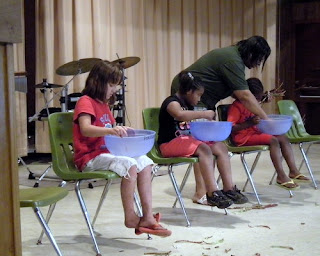 Well, it was getting on about time for one of the two star attractions, the grand PurpleHull Pea Dinner. A crowd of us walked back up to the school and headed for the combined cafeteria-auditorium, where the first round of the shelling competition had begun. The kids were doing their thing, slitting the end of a PurpleHull peapod at one end and sliding their thumbs down to release the peas. There’s an art to it -- and either you’re taught it when you’re a child or you try desperately to catch up. While I had many purple thumbs back in my single digit years, I wasn’t about to go embarrass myself in the competition. I headed for the kitchen with my $6 for my PurpleHull Pea meal. 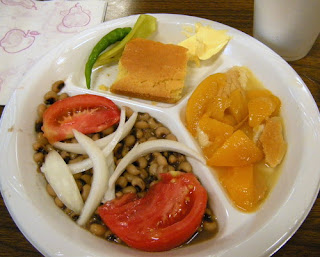 And as I stood in line, the ladies working the cafeteria line carefully loaded each plate up with a hunk of cornbread, a generous serving of PurpleHull Peas and a mess of peach cobbler. They asked each person going through if they’d like some ‘mater and onion with it -- the correct answer is yes. There was a hunk of butter on the end of the counter, and around the back was some peppers if you liked them. And you got a beverage, tea or sweet tea or Kool-Aid. After getting my plate and drink I weaved back through the crowd to find a single seat on a cafeteria-style table. 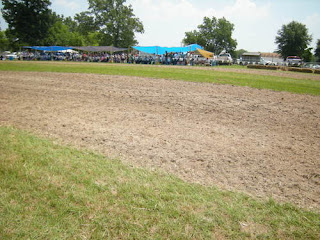 And what a meal… no meat at all, just the savory sweetness of the peas accompanied by stringent fresh onions, juicy just-picked tomatoes and that slightly sweet cornbread. The peppers were all right with it, but I found that just sopping up some pea juice with a little cornbread was all I really needed. 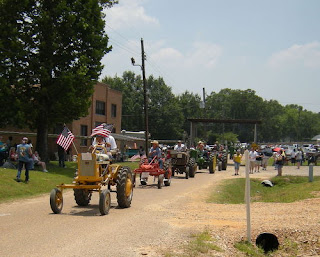 Lunch over and the shell-off just about done, people started packing up and heading outside. Unlike most of the rest of last summer, that particular weekend in June straddled the 100 degree mark. A slow pilgrimage started towards a field down the road, with people bringing their chairs and umbrellas along. I followed suit. 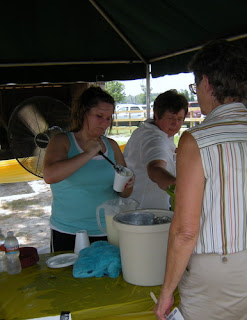 And once I found a place to light and took some photos, I developed a mighty thirst. Fortunately there was a local group selling homemade ice cream. 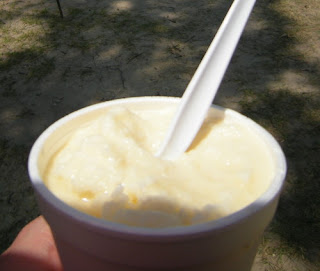 They’d made up a bunch in advance and stored it in pitchers, but it was melting so fast that what you got was a nice ice cream drink that resembled a shake, which was fine. I was one of the lucky ones -- they ran out and were down to canned drinks and bottled water minutes later.

Why in the world would all of us line up that way? Well, everyone wants a good seat for the tiller races. That’s right -- Emerson’s not just home to the festival but also to the World Championship Rotary Tiller Races. It’s something between a roller derby and a car wreck, I tell you what, but you can’t take your eyes away.

The first round was the ladies’ competition -- and there were just two racing this year. The crowd surged from under sunshades and umbrellas and crowded at the fence surrounding the makeshift tiller track, hundreds of people breathing and sweating with anticipation.
There was some prep work, and then suddenly the burst of gunfire and they were off!

And halfway down the lane, one of the two ladies wiped out in a huge shower of dirt and dust, quickly engulfed in a deluge of dirtiness. There was a moment of silence that gripped the just-hollering crowd, that moment of “oh gosh, what happened, she all right?” that whispered itself out there. 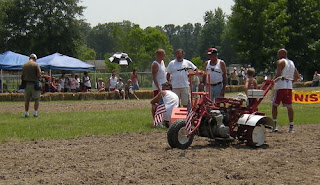 The woman stood up, threw up her thumbs and there was a roar. It was all in good fun, and other than her pride and a few scrapes she was fine. 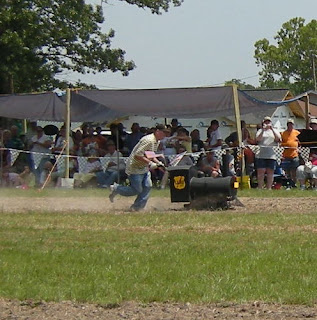 Unfortunately, no one could have known that the whole affair would end with the first race. The wipeout killed one of the two tillers for the competition, leaving little to do but try to fix it. While the crowd waited, a couple got married out on the track, and a gentleman showed off his tiny rail engine tiller. 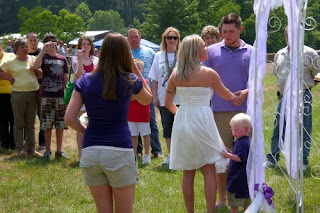 And that was it. It was hot, I was tired and I had a long drive ahead of me. But I had a belly full of peas and a camera full of pictures. The day for me had been a success. 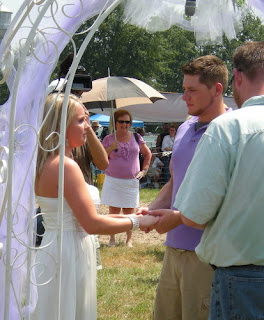 I just got to looking at the schedule for this year’s event. I noticed that this year the Great Purple Hull Pea Cook-off is in the afternoon and the tiller races are in the morning. Perhaps the idea is to keep as many people inside in the cool in the late afternoon hours as possible. I can sure endorse that.

If you’d like more information about the Emerson PurpleHull Pea Festival and World Championship Rotary Tiller Race, check out the website. It’s a great deal of fun and a wonderful time to enjoy one of our state’s more eclectic festivals. It's coming up June 25-26th and is usually held on the final weekend of June each year.
Told by Kat Robinson at 5:38:00 AM