Last days of The Box. 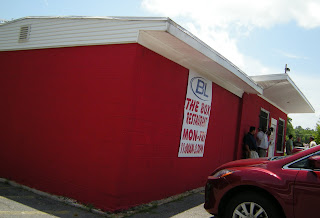 “Get on down to The Box,” a popular admonition when I was growing up. Or directions. I just remember adults around me talking about these great burgers when I was a kid, burgers that defied 80s health-food logic and the like.

I keep hearing these things about The Band Box on south Main Street in Little Rock… its ancient past just about lost in antiquity. Some folks outside the state know the place by its full name because of its connection to Bill Clinton; in 1992, journalists descended on Little Rock to dig up anything they could about the up-and-coming presidential contender, and what they discovered was he really, really loved his food. Not as famed as Doe’s Eat Place but somewhat closer to the Arkansas Governor’s Mansion, the little building got its share of visits from out-of-towners. Around here, though, it’s always just been The Box, and you just went and called in an order or went and picked it up.

I got away from the place in my grown-up years. Something about wanting to maintain a more svelte appearance and healthy lifestyle. But then I fell into writing about travel and food for a living, and I put it on my list of places I wanted to share with the world. And somehow, I kept missing it.

And then back in January, word came that USA Drug had managed to buy that block between 16th and 17th streets and were going to level the whole damn thing and build one of those spankin’ new stores there. I knew the clock was ticking… and yes, I finally made it down there, with eight days to go.

Now, when you walk in the place, the first thing you see is the kitchen, right across the low bar from you. You always say “hi” or “hello,” unless you want to get chided by one of the buxom women behind the counter. If you’re in the know, you say hello to Arthur on the griddle. You go find yourself a seat in the windowless dining area or you sit at the bar, either one.

This last visit (and I do mean last -- to this location) I walked right up and sat at the bar. One of the ladies there pulled out her ticket book and gestured at the wall with her head -- “menu’s there, hon.” I knew what I wanted before I got there, and only looked at the wall after she had torn off the ticket and slapped it on the counter across from my seat.

The kitchen was impossible. I mean, seriously, how five people and a child could keep things rolling in what appeared to be a 12’x12’ or so space I’ll never know. One lady worked the buns -- toasting them and then assembling the condiments and veggies on top. Arthur worked behind her, manning not only the constantly-filled griddle but the onion rings and the French fries as well. A large tattooed guy, generally good-natured and friendly, managed to glide back and forth effortlessly between dishwashing and bringing in stock and doing whatever needed to be done. Another lady swept through over and over again, waiting the tables out in the dining room and then almost skating back and forth with the orders. The last manned the register, a full time job in itself. I did see a girl, I’m guessing around 11 years old, taking some of those orders herself and bringing them back up. 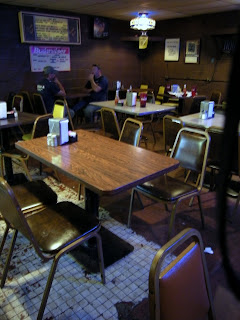 The place is so small, you can’t help but rub elbows with your neighbor. Yet when I arrived there were easily 50 people in the place. They ranged from T-shirted 20-somethings to a couple of guys in business suits, all handling burgers and picking at fries and all talking. No music played overhead… just that constant hum of half-a-hundred mingled voices making lunchroom music just under the level of speech.

I watched as burgers came off the griddle, four to six patties at a time. The lady working the buns would pop the bottoms into red plastic baskets that had been lined with aluminum foil and wax paper, each bottom bun covered with its supply of Miracle-Whip style salad dressing, white onion, pickle, thin tomato and such. Arthur would all but fling patties onto them -- some with cheese melting down on them -- and then sling back around and bring utensil pinches full of fries or onion rings around and flop them on in. He’d also throw a little bacon or Jalapeno on top of a few, per order. From time to time I’d see a double-patty head over. The top bun with its thin layer of mustard would be plopped on top and he’d throw the ticket on top of the basket for the waitress to come grab. 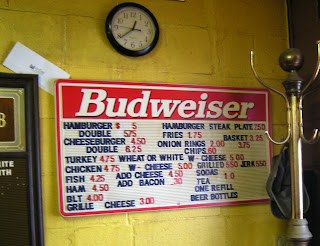 Back to that menu -- it includes a decent amount of things -- a hamburger steak place, turkey with cheese, a chicken sandwich, a ham sammy. I did see one hamburger steak go out -- and amazingly enough, a salad, first I’d ever seen ordered there, but it could have just been a mirage. But not once did I see a chicken sandwich leave that kitchen. No, everyone wanted some beef, and it was flying out the kitchen at an incredible level.

There was a line forming at the register. I’d made it there about 12:30, in the middle of the lunch rush, and folks were getting done and antsy and needed to head back to work. They’d all holler over at Arthur, just about every one. A distinguished looking gentleman in a black polo hollered over.

“Did I hear you were out of beef?” 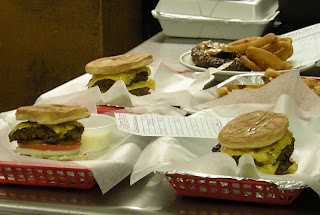 “Just about,” Arthur replied, slapping more patties on the griddle. “That’s what we want to do. We want to run out of everything.”

“I hear you must have struck it rich and that’s why you want out of this place.”

“Aw, you’d know more about that than I would.’ Arthur sprinkled the pattied he’d just thrown down with spice, then flipped the ones next to the new patties so they could cook on the second side.

“I don’t know about that. You gonna remember us when you’re movin’ up?”

“You’re the one in line, you’re movin’ up just fine. Let me in on that secret!” he happily called. The gentleman nodded his head and opened his wallet, having just reached the register. He flipped out a couple of bills and waived off the change and receipt.

Arthur reached over and slung down a couple of patties pasted together with cheese on a basket-bound bun. “Last day’s a week from Friday, the 18th. It’ll be a few weeks.”

“And you’re opening over on Ringo?”

“Seventh and Ringo, yeah, man.” He slid a single over, then another, and a third but with no cheese.

“I’ll be there.” The gentleman opened the door and saluted at Arthur.

“I’ll be waiting,” he called after him, and slung a big pinch of fries into the last of the four baskets. In one smooth motion, one of the ladies behind that counter grabbed the basket and slid it in front of me. “We need to get you an iced tea,” she said, more to the other girls back there than to me.

“I figured it’d come when it got here,” I told her. I had witnessed the crazy busy behind the counter for about ten minutes at that point.

“Thank you,” she answered, plopping a fork down in my basket. 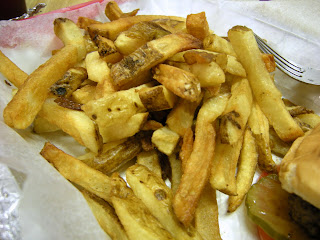 The mess that awaited me was hot -- I just saw it all come together, but I still managed to burn the roof of my mouth on the fries. They’re unseasoned and they’re greasy, more home-fries than French fries, but man… that’s good. I dunked them in ketchup and figured out pretty quickly why I had that fork and why I should have used it. No manner of flimsy paper napkins was going to be able to get the light grease off my fingers. 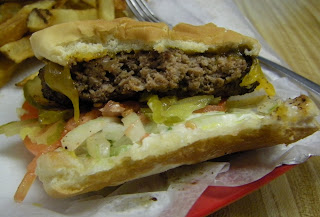 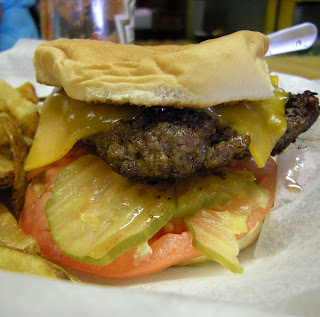 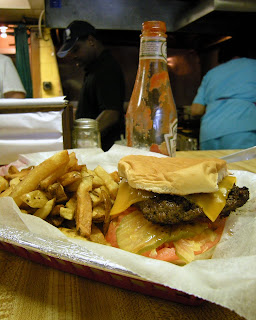 I examined my burger, as always. Arthur came to the counter and grabbed a stack of patties from underneath. He gave me a curious glance as I took the first couple of shots, then turned around back to his work with no comment. The burger had that nice sort of crust on it, the sort you get with a well-seasoned griddle, the sort of grease-fired crust that makes a great burger what it is. That patty didn’t have a whole lot of seasoning to it, but it was what it needed to be. The burger meat was smashed down just enough with the long flat spatula Arthur wielded to knock it at quarter inch thickness, cooked medium well and coated with the Cheddar cheese I had asked for (Swiss, American and Pepper Jack are other options). The patty sat on its veggie bed, and when I took that first bite juice ran down my arm and dribbled off my elbow. That… that’s a burger.

I looked up and realized the once-full restaurant had suddenly lost all but a quarter of its occupants. The clock on the wall had just turned to 1 p.m. and the business crowd was gone. What was left were the lollygaggers, the self-employed and folks like me, unwilling to work on the time clock. 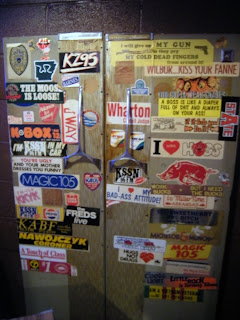 I was never rushed, never hassled for the camera or the notepad, just asked once if it was all right with me. Yet I got one of the best dinner shows you could imagine, watching the well-oiled machine that was The Box’s crew. And when I went to pay, I took a good look around and tried to soak up the memory. There are still stickers on the walls from radio stations that disappeared 30 years ago, photographs faded with age from beauty queens and politicians and an air of timelessness and humility. It’s hard to think it will all be gone soon.

Come August, it’ll be back, just not here. It’ll take a few weeks to get moved into the new place at 7th and Ringo, and then it’ll be back open again. But I can’t tell you whether it’ll be close to the same. Will the griddle be towed over there? Will the grease be saved? Will what made The Box what it’s been all these years what it is? Those are questions to ask after it reopens. 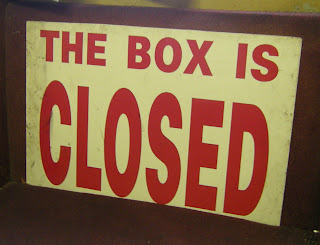 For now, it’s just a whole lot of memories and some mighty fine burgers, hanging on for another eight days before oblivion. We’ll see how things go.