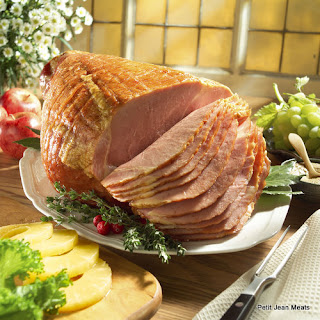 The holidays are a big time for Arkansas’ largest ham operation.  Based in Morrilton, Petit Jean Meats provides ham, bacon, bologna and sausages from a recipe that really hasn’t changed that much in the past 40 years.


The company itself has been around since 1926, when its founder Felix Schlosser opened a meat market with Ellis Bentley.  Two years later, Schlosser bought out Bentley and, after rebuilding from a fire, opened the Morrilton Meat Market and Sausage Factory.  Fire destroyed the plant and smokehouse in 1946, but it was rebuilt and reopened the same year.  The company developed its smoked meat products through the ‘40s and ‘50s, and for the most part the smoked bone-in and boneless hams and smoked and peppered bacons haven’t changed.  What has changed is the packaging and the numbers of hams that roll through the facility each year.

David Ruff is the son of Ed Ruff, one of the two brothers who delivered those products starting in the ‘30s and who managed the company beginning in the ‘50s.  I spoke with him about the massive Morrilton operation and what makes a Petit Jean ham.

“We buy fresh hams already brined to our specifications, without skin.  Trimmed ‘to the blue’ is what we call it, no surface fat, short shank, to make a quality ham,” says Ruff.  “We inject it with a seasoning and curing solution to get the flavor in the ham, and then it sits for at least 24 hours before we put it in the smokehouse.  That helps the seasoning come out.

“(The hams) smoke for about 18-22 hours, then chilled for about 14 hours and brought down to 35 degrees.  Then we put it in the vacuum package.”

Four days to package -- but it will keep a long time, up to a year in the freezer in its original packaging.  How’s that able to be possible?  Ruff says it‘s in the bag.

“A vacuum bag consists of six layers of film and each layer has a specific property -- one of them is oxygen impermeable, which eliminates any potential for freezer burn  We can take a ham freeze it and put it up against one that’s fresh any day.”

The hams are frozen, and that’s how they’re shipped.  Petit Jean Meats only ships on Mondays, Tuesdays, and Wednesdays -- and nothing is allowed to ship over more than three days.  That way, no ham sits in a warehouse over the weekend.

Of course, this sort of shipping schedule means that Petit Jean Meats aren’t exported to other companies.  “We ship to the United States and Puerto Rico, but we do not export.  We ship to Alaska and Hawaii.  It may cost more to get it there, but it’s worth it,” says Ruff. 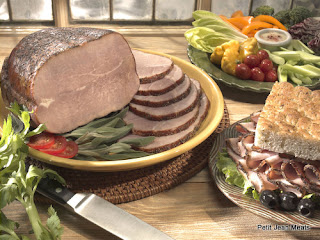 The cool thing about Petit Jean Meats?  Well, there’s a couple.  There’s the fact that it’s a no-filler production.  Bologna and hot dogs are made from just beef and pork, no weird things that you really don’t want to consider as part of something meaty.  And the hams?  “We do inject our hams with a solution -- but if we weigh that ham at 15 pounds when we get it, it’ll weigh 15 pounds or less when it’s packaged.  That’s how we differentiate our hams from water added hams.”

Ruff is proud of that fact.  “You can buy a ham a whole lot cheaper than our ham, but once you squeeze the water out of it and cut off the fat, per pound you’ll pay about the same.”

Then there’s the fact that it’s a family operation.  Ruff’s grandmother, Mary Ruff, was the founder’s cousin.  Generations of families have worked at the plant, and it’s become an integral part of the community.

But what you’re probably wondering is how are the products?  Well, they’re good enough to have developed a loyal following.  Most everything they make you can pick up at your local grocery store.  Then there’s the mail order, which is a really good option for sharing the flavor of Arkansas with those less fortunate than us who have to live elsewhere.  Your standard sized bone-in 12-14 pound ham is $73, a dollar more for peppered ham.  They also do a number of gift boxes that include a variety of things, depending on what you want -- bacon, sausage, boneless peppered beef, turkey, even complete dinners you can have shipped to your door or someone else’s.  The idea of having a great meal of meat and fixings fully cooked and ready to go may even turn you on to the idea of turning off the oven for a while.

Must be pretty good… Petit Jean Meats ships out 100,000 hams during each holiday season.  That’s a whole lot of happy customers.

You can find Petit Jean Meats bacon and hot dogs most anywhere in Arkansas.  Order and send a gift box of ham, bacon, or sausage just about anywhere in the United States. Visit petitjeanmeats.com or call (800) 264-2475.
Told by Kat Robinson at 7:06:00 AM