Dan's I-30 Diner by the Interstate in Benton.

I get a lot of recommendations in this job, and sometimes it takes me a while to get out and try them all. Part of that is just simple logic -- there's just so much a person should eat in a day. There's economy -- can't afford to eat out for every meal. And there's healthy eating as well... I can't guarantee that what I might find at a restaurant I've never been to before is going to serve up food that's reasonable in fat and fiber and calories, much less palatable.

So it's taken me a couple of months to get out to Dan's I-30 Diner. Actually, I did try a couple of weeks ago, but didn't realize they closed at 2pm. Glad I went, though.

I walked in and was told I could go sit where I liked.  A rather thorough waitress came over and took my drink order.  I asked her if I should go for breakfast or lunch, and she told me both were good but the biscuits weren't as fresh as she'd like them by this point of the day.  I happily ordered lunch. 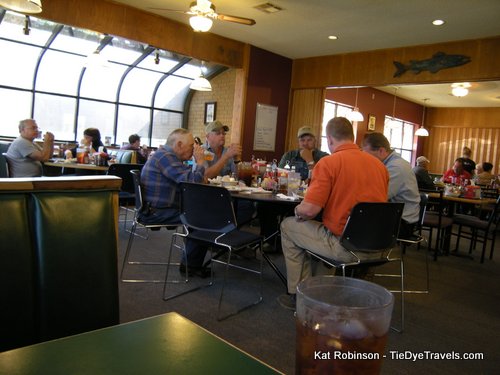 I know, I say a lot of things like "I was surprised that" or "it was remarkably good."  I tend to cheerlead a bit over some of the restaurants I find.  So let me put it to you another way.  The combination of warmth, flavor, and variety in my lunchtime repast filled me not just with food but with pleasure.

There were several choices on the plate lunch special on the board -- hamburger steak, chicken or catfish tenders, or chicken dressing for entrees, everything from pinto beans to turnip greens for sides.  I'd asked the waitress which she'd chose, and she'd suggested the chicken dressing, and she was right.  By gum, it was some of the best cornbread-based dressing I've ever tried, with big hanks of pulled chicken and a little cup of cranberry orange relish served on the side. 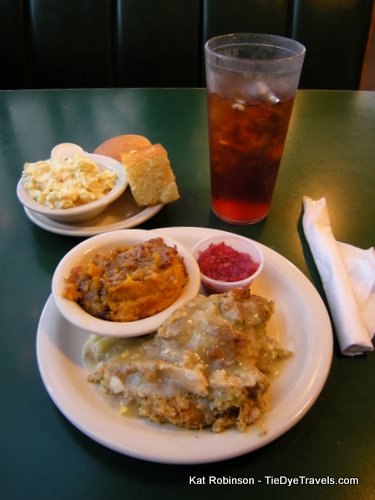 The sweet potato casserole had this nice crunchy top of caramelized sugar and nuts on it.  And the Devilled Egg Potato Salad was the best potato salad I'd had in quite some time, very tangy and eggy.  My waitress also brought not only cornbread but a roll, told me she couldn't remember which I'd asked for.  The roll was a little moist and very soft, of the Parker House category.  The cornbread was Arkansas style, unsweet except from what sweetness came from the corn, and made from white flour.

This little repast set me back all of $6.95.  I was disappointed... because I couldn't help but get stuffed and had to turn down a slice of homemade egg custard pie ($1.99).

So I get to the register to pay, and see this sign.  Had to ask about it.  That chicken dressing I had for lunch?  Turns out you can order it for Thanksgiving, $15.50 for a half pan or $27.50 for a whole one.  Same for the sweet potato casserole or the apple or cherry cobblers.  I'm going to have to give that some serious thought.  I'm telling you, that dressing was good.