A Preference for a Favorite - Little Rock's Casa Manana Restaurants. 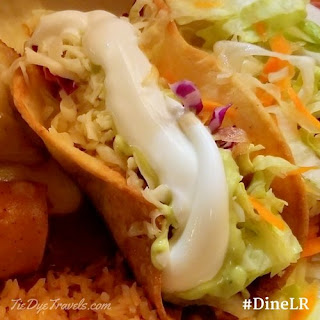 This article has been updated.

Over the past couple of decades, Greater Little Rock has been inundated with lots of new Mexican offerings. But there’s one restaurant I keep coming back to.

It is human nature to choose favorites… and while I have endeavored to keep a clear mind about the places I have been over this journey, there are places that when I am home I return to, like a homing pigeon to its coop.

And when it comes to Mexican fare, I tend to return to Casa Mañana.

I remember when it wasn’t so popular, when it was a little restaurant stuck in an old Taco Bell location near UALR off of Asher. It was 1995, and I was recently out of college and on my way into my radio-to-television transition. We were scrapping to make it, of course, and any sort of good deal that could be found was grasped with both hands and utilized well.

Casa Mañana fit that bill, even then. My meager paycheck could usually squeeze out a visit or two amongst the rent and bills us young folks tended to have. And I could always count on leftovers to take home with me.

Of course, as many of us are wont to do, I moved away and grew up, and so did Casa Mañana. The folks that operated it opened new locations here and there -- and were on-board for the Little Rock River Market -- a dream when I left, a reality when I returned in 1998. 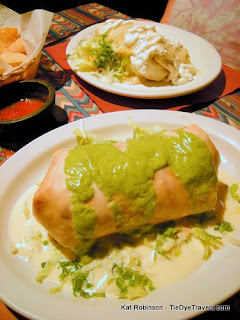 And they opened a location on Cantrell -- which is now the flagship location for a menu that has kept a lot of its charm while growing and expanding a pleasant repertoire.

Human nature also makes us creatures of habit, and for many many years my husband and I would end up with the same plates -- for him, the impressive Casa Mañana burrito (sans guacamole for him, $6.99 with or without), 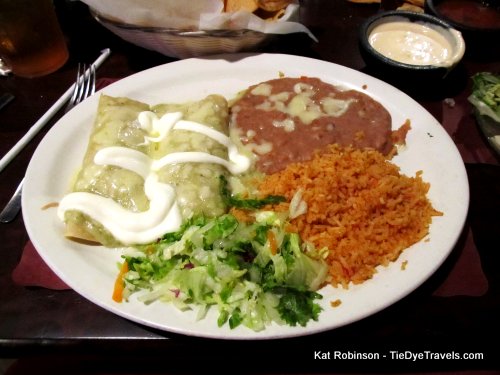 for me the Crab Enchiladas ($7.99). Sometimes we defer and go with one of the delicious combination plates (the Number Nine -- chicken burrito, chile releno, and beef taco with rice and beans for $7.99 at dinner is often ordered) but we tend to stick with what we know. However, it is also in our nature as human beings to improvise and experiment, to try new sensations and experiences. So on a Thursday afternoon in January, we decided to drop by and try out dishes we’d never considered before. 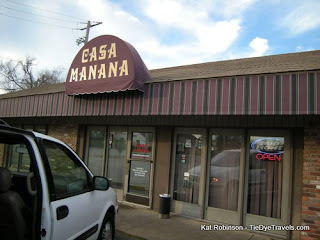 Early afternoon is always a good time to go (so is late morning -- the restaurant opens at 10 a.m. during the week and 9 a.m. on the weekend). There weren’t many people inside at the time, and those that were there were merrily conversing away in Spanish. 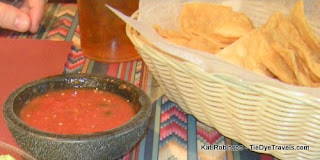 We were greeted, of course, with the traditional bowls of salsa and fresh chips. The chips, of course, are housemade; the salsa as well, redolent of red bell pepper and cilantro and cumin, quite mild and easy on the mouth, the sort of salsa even the most delicate of diners could manage. Usually we also go with the cheese dip as well, white with its light dollop of spices -- but decided to pass so we could indulge in dessert later.

After some discussion, my husband decided to go with the Puntas Enchiltepinadas ($8.99), strips of beef cooked with pico de gallo and dried chiles. I decided on the Mole Poblano ($7.99), which seemed like a real departure from my normal choices. What the heck. 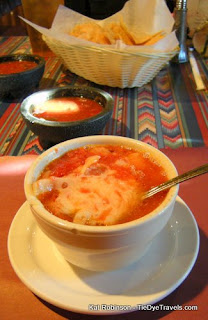 Our waitress quickly brought us out our starters for dinner -- a large salad for my husband, a hot bowl of tortilla soup for me. The salad was an impressive pile of shredded lettuce and chunks of tomato, overwhelmed by dressing (1000 Island). My soup, though, was a dark and delicious delight, a rich tomato and vegetable broth with crispy tortilla strips and a huge scattering of white cheese, the sort of thing you crave on cold winter nights.

Our waitress was ever attentive, as always. We tend to get rather good service -- one of the reasons we keep going back -- though from time to time there is a bit of a language barrier. Some might find this frustrating; not us. There’s never been a time when we haven’t been able to overcome it, and the few times servers have misinterpreted our orders the problems have been quickly resolved. 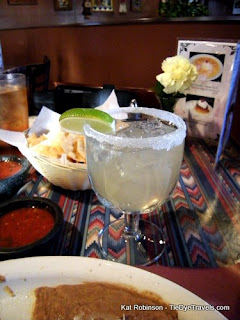 My husband also decided to go with the traditional American accompaniment to Mexican food, the lime margarita ($4.75, $3 during happy hour), by some accounts one of the best you’ll find in Little Rock. And it’s easy to see why. Unlike some area offerings, Casa Mañana’s margarita is a good blend between tequila and lime. The liquor doesn’t overpower the drink. It’s a great balance between sweet and salty, and a fine accompaniment for dinner. 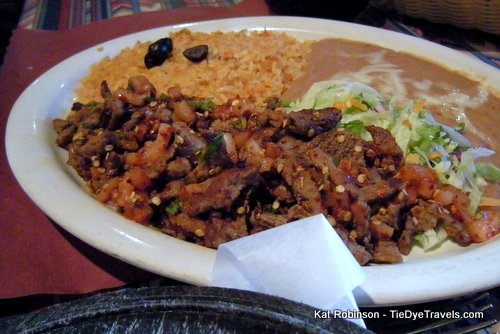 Our dinners shortly arrived, along with rice and bean sides and a good number of hot, soft tortillas. My husband ranted over the taste of his Puntas, so I also gave it a shot. The spicy meat brought tears to my eyes -- they aren’t kidding when they write “Hot” twice on the menu to describe the dish. The meat takes the spice well, and retains its meatiness without being salty like such dishes often are. 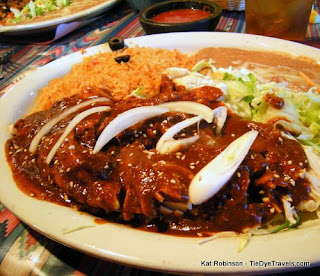 My bigger surprise came with the Mole Poblano, though, which announced itself to me first through scent. Compared to your average rice-and-beans-and-cheese aroma that greets most diners in Mexican restaurants, I could smell the chocolate and bananas and nuts in the sauce. The taste, however, was something far deeper -- almost a history in a bite, with chiles and raisins and other delicious things partying about. Such a strong and powerful sauce might overwhelm some dishes -- but with the well-flaked and hearty portion of chicken it covered, it made a fine dish. And laid out on a tortilla with rice, beans, and a little sour cream, it achieved ethereal heights for such an earthy and delicious dish. Of course, the little spicy kick that decided to announce itself a few moments after a swallow was welcome, too. 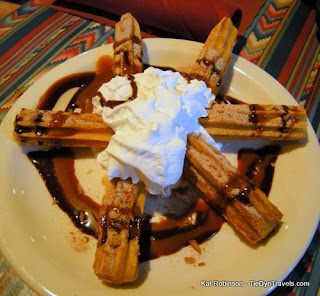 Far too many times desserts are overlooked, but at Casa Mañana they’re proudly displayed in their own menu on each and every table. While we’re both fans of the Flan and dig the Sopapillas, there’s one dessert that’s especially meant for sharing -- the fried tube-like Churros. Six fried pastries filled with a little crema are drizzled with chocolate and caramel, sprinkled with a cinnamon-sugar blend and topped with whipped cream. Eat them with a fork or your fingers, doesn’t matter… the light crunchy pastries are as big as your forefinger and a little bigger around than your thumb, and they’re the perfect little finale to a dinnertime performance. 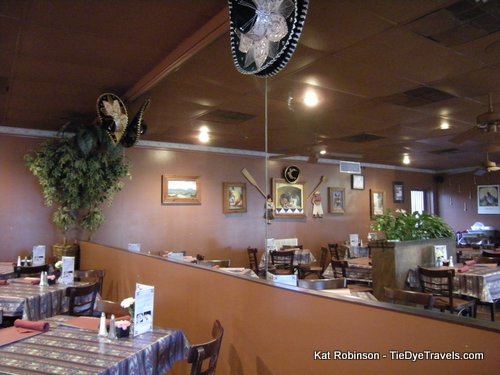 The taste of Casa Mañana can be experienced elsewhere -- at Casa Mañana Taquiera in the River Market or at La Palapa, the Mexican seafood place out on Highway 10. But we still find ourselves heading to the location on Cantrell Road catty-corner from Stein Mart.

If it’s warm, check out the deck out back -- a nice hidden oasis that peers out over the valley below. Smoking is allowed on the deck, but not inside.

UPDATE 8/31/17: While updating and adding photo credits across the board, I came across this very old post.

Do I still visit Casa Manana? Why yes, yes I do. It's a go-to for my mom and it's comfortable and familiar - to the point where I rarely shoot what I eat any more. But I can share with you so many of the dishes available. 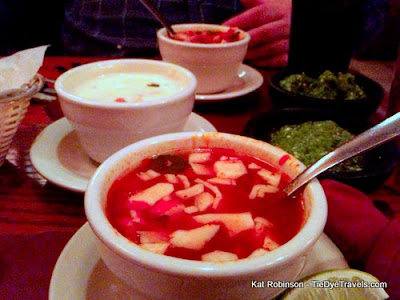 Most of the soups at Casa Manana are tomato-based, which is excellent since that tomato base is down pat. The tortilla soup as I mentioned above is excellent, and the chicken soup is absolutely divine. The crab soup is actually made with surimi, which gives it a completely different flavor from traditional crab soups. 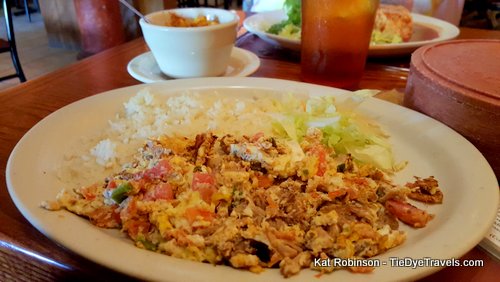 I've written separately about breakfast at Casa Manana - it should be noted that the full menu is offered all the time. Casa Manana actually specializes in egg dishes, and delights such as the Huevos con Machaca (pictured) and the Huevos Divorciados are both excellent cold-weather dishes. And yes, there is coffee. 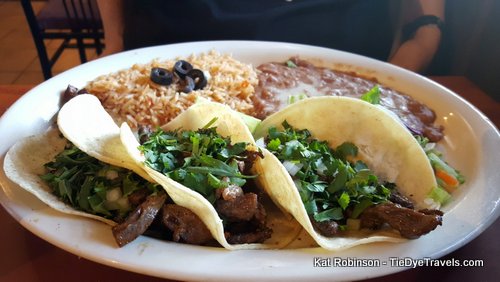 La Taquiza is Casa Manana's typical taco celebration - three tacos with onions and cilantro, with rice and beans on the side, in either flour or corn tortillas. The carne asada tacos are a favorite. 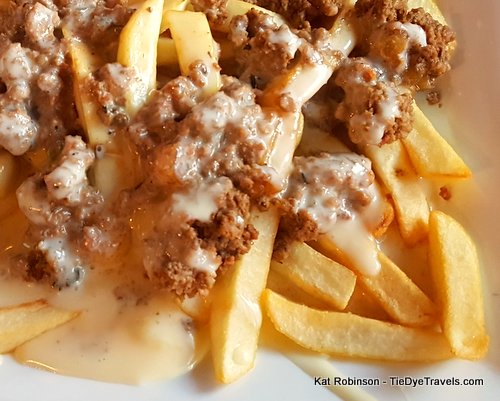 Most of the offerings at Casa Manana are easily adaptable for kids - but one item in particular stands out on the actual kid's menu. It's nacho fries - seasoned ground beef and cheese dip served on French fries. And yes, I have ordered this for myself before. 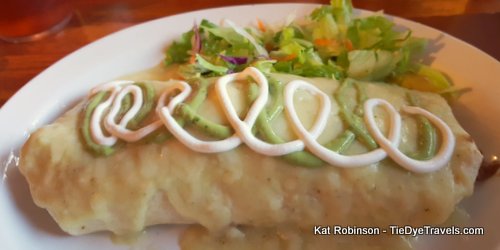 The Casa Manana tends to come out softer than other restaurant-named super burritos in this area. It's smothered in cheese dip and topped with a creamy tomatillo sauce and sour cream and served with a little salad on the side. Within, beans and rice and your choice of meat. I recommend the shredded beef. 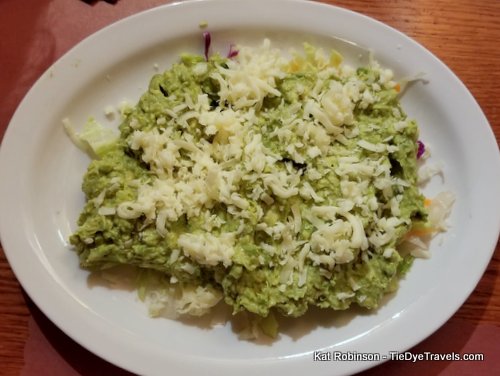 When I get the guacamole, I prefer it without the pico de gallo mixed in. This is an incredible amount of avocado and cheese, and you really should share. Nachos come with melted cheese, sour cream, refried beans, guacamole and pico de gallo on tortilla chips. Add in a meat - such as the chicken on this version - and you really do have a meal for two. 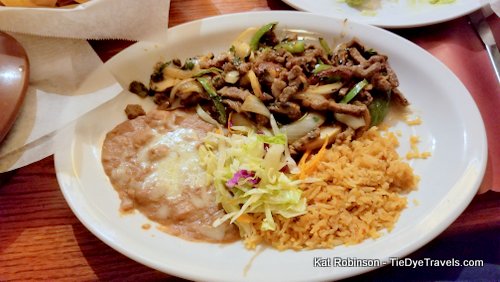 I've developed a new favorite these past few years - the Puntas Poblano. It's beef strips sauteed together with mushrooms, onions and bell peppers, served with tortillas and two sides. 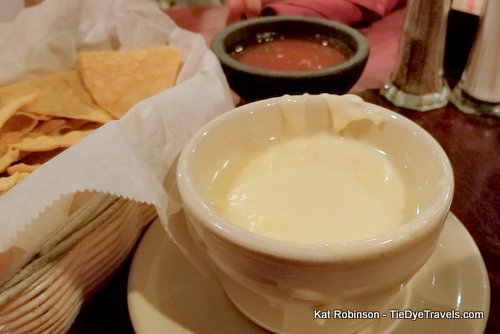 Of course, being a Little Rock restaurant, cheese dip is a must, and at Casa Manana it's white and thick, perfect with tortilla chips or fries - which is how I usually have it these days.

There are three locations of Casa Manana, and they all do their own thing pretty well. The location on Cantrell has a marvelous patio out back overlooking the side of the ridge and does the best green enchiladas, in my honest opinion. The one out on Highway 10 is great for seafood and does the best version of the guacamole, and the taqueria in the Ottenheimer Market Hall in the River Market scores perfectly on the Huevos con Machaca (though due to its location, all dishes there come out in Styrofoam boxes). Still, having those choices means you can get Casa Manana wherever you like.

For more information, check out the website. And for other opinions, read through the Zomato reviews on the links below.