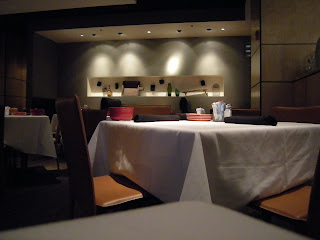 I know it's a chain. I know, I am not much on chain food. Really, I'm not. I'd much rather experience local eateries and support local restauranteurs.

But I can't help but liking Cantina Laredo. Even with the prices.

Our location here is pretty new. It opened in Midtown Mall last fall and, well, I pretty much ignored it. In fact, I was pretty determined not to go because of a review from a friend who said it was pricey to the extreme.

But on a Wednesday afternoon in March my traveling companion and I found ourselves with a limited time to grab a bite and right in the area. And rather than try the old standby of Pei Wei again (which I like, don't get me wrong, but you can have too much of it) we decided to pop in to Cantina Laredo. 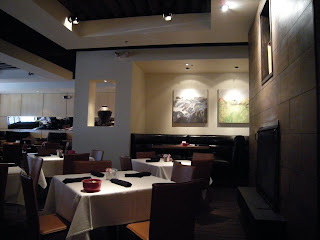 And first thing that struck me was the fact that this just doesn't look like a Mexican restaurant. More American Lodge meets IKEA. Which isn't bad, but it's the sort of decor that 30 years from now will be considered the "decor of the oughts." Still, it's all right.

We were shown to a cozy corner table and presented with menus of utter urban delights -- the sort of menu that would make one exclaim with delight and hope over and over again, things like Mexico City Chile Relleno (Picadillo filling with ground beef, pork, almonds, and raisins topped with ranchera sauce for 13.29) and Camarones Escondidos (Grilled chicken breast stuffed with shrimp, topped with sauteed spinach and chipotle-wine sauce for 18.99). Many of the items sounded way too incredible to be true. 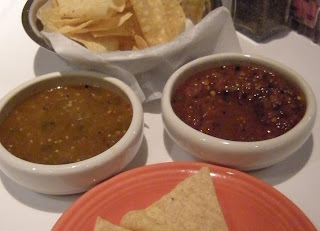 Our waiter came by and delivered the standard bowl of tortilla chips (apparently prepackaged) and two very different salsas. One was a fresh tomato salsa, very chunky, very sweet, served cold. The other -- a tomatillo salsa with tons of cumin 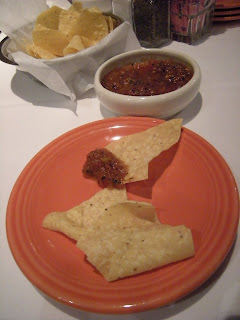 and pepper and a hint of something reminiscent of garam masala, served hot. He also suggested the "house special" guacamole made fresh at the table. I passed, since my traveling companion loathes guacamole... found out later on it would have cost us $9.49.

We placed our orders and made pleasant conversation -- and were startled when our entrees arrived at what felt like a very rushed speed. The plates were hot -- in that "yeah, you're at a Mexican restaurant" sort of way, but hotter -- and the servings large. And very, very pretty. 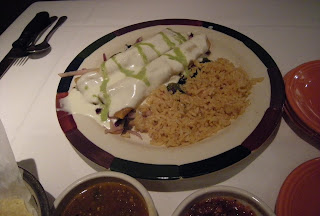 My companion had gone for the Enchilades de Camarones ($16.99), enchiladas packed with shrimp, Monteray Jack, and peppers on a bed of spinach and veggies topped with a sour cream poblano sauce. I have to say, I wasn't really thrilled with the semi-cooked red onion in the dish -- but that's the only thing I can say about it. It was very, very rich and served with this perfect soft Spanish rice to go with it. My companion told me the cheese made everything just feel "melty soft" in his mouth. 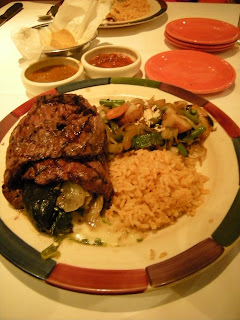 I went for the Camaron Poblano Asada ($21.49), an overwhelming dish reminiscent of Medieval dishes where one thing is stuffed inside another inside another (or Turducken, one or the other). The 10 ounce carne asada flatiron steak was wrapped around a poblano pepper stuffed with shrimp, mushrooms, sauteed onions, and Monteray Jack on a puddle of Chimichurri sauce. The waiter had asked how I'd like the steak, and while it wasn't quite the medium rare I had hoped for, 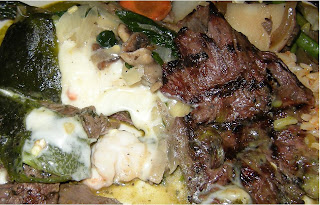 it was still lovely nonetheless. It too came with Spanish rice and with a melange of lovely roasted veggies -- green beans, zucchini, mushrooms, carrots, skin-on red potatoes -- lovely and not soaked with butter or any strange substance, just sprinkled with almonds. I quite enjoyed it but had to take some home with me. 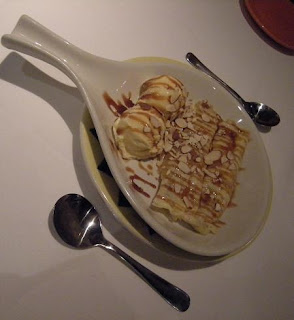 Of course, what is dinner without dessert? We decided to give the crepes a test drive. The piping hot apple filled crepes came out draped in caramel and flecked with almond slivers, with two round lumps of vanilla ice cream on the side. For $5.99, it was pretty darn good.

But of course, there is 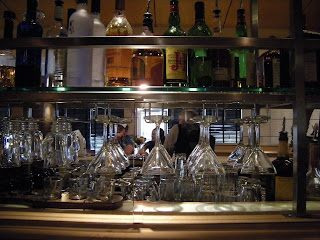 the check. Before the tip, it still came out to nearly $55 -- a bit much for two folks on a budget. And that's without touching the margaritas -- which were inviting and tempting.

So, the verdict? Decent and good for a restaurant, but yes indeed a bit pricier than just about every other Mexican restaurant in Little Rock. And that might kill it here. But if you have a couple extra bucks and want to go for something extravagant, knock yourself out.

You'll find Cantina Laredo at Midtowne (the shopping center at the northeast corner of Markham and University). They have a website or you can call (501) 280-0407.
Told by Kat Robinson at 5:57:00 PM