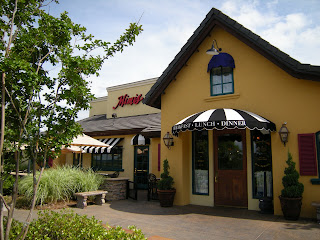 Back when it opened, Mimi’s Café was the one place in town you couldn’t get into. Every time we made a loop around the Garden Ridge parking lot, there’d be a line out the door and the lot would be full. After a while, we crossed it off our list and didn’t think much about it.

But on this particular Tuesday afternoon in June, we decided to give it a try. After all, what chance was there of being a crowd at 3pm?

Not much, it turns out. We were able to find parking close to the entrance, and we were quickly ushered into a booth in a large sunny room. 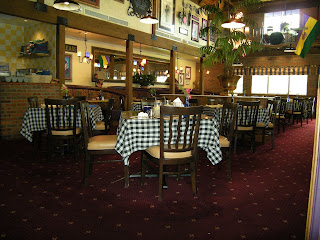 All I’d heard about the restaurant before was that the cooking was pretty good. I didn’t exactly expect a New Orleans themed restaurant. For one, it seemed a little too clean and neat to represent the French Quarter. For two, the menus contained a whole heck of a lot of choices you won’t find near Bourbon Street. No matter.

Our waiter took our drink orders and returned -- serving mine up on a doily, but none for my male traveling companion. He also brought lemon for the tea separate on a plate -- addressing a real pet peeve of mine. I don’t like lemon in cold tea, and I hate it when a waitperson assumes that I need that slice on the rim of my tea or water glass. This was pretty courteous. 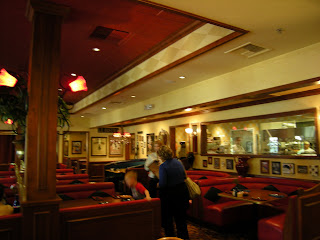 We spent a good while attempting to determine exactly what we wanted off the menu. A lunch menu carried assumedly smaller portions of many of the main entrées. There’s also a large selection of appetizers, salads, burgers, and entrées on the main menu -- along with several drink options.

My traveling companion opted for the Asian Chopped Salad ($9.49), and I went for the Parmesan Crusted Chicken Breast (lunch portion for $8.99). I also opted for the French Market Onion Soup for an additional $1.20. We sat back with our drinks and discussed the day’s events. 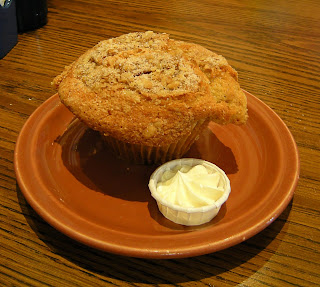 Our waiter brought my soup and my companion’s muffin out first. The entrée salads are served up with a muffin of your choice, and my companion had selected a Buttermilk Spice muffin. It was as large as a grapefruit and was rich for a muffin, with a taste reminiscent of pumpkin pie spice. It was served up with its own twirl of real butter. 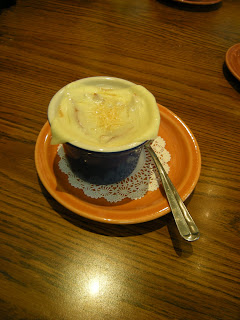 My soup was delicions. The creamy white cheese melted across the top was inoffensive and completely without bite, but the broth underneath was heady with onions and the hint of beef, and the well-soaked crouton below matched the flavor well. I would have been happy with it and a small salad for a quick lunch. 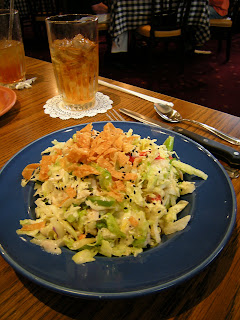 Our entrées weren’t far behind. My traveling companion’s Asian Chopped Salad was large and green, full of chopped lettuce, cabbage, green and red bell peppers and poppy seeds, along with generous chunks of chicken. He felt it could have used a bit more spiciness like similar Asian inspired salads at other locales, but the salad was still quite edible. 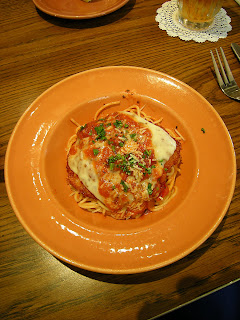 My chicken came out on a soft bed of spaghetti noodles that had been tossed in a tomato sauce. The sauce itself didn’t have much spice to it, but you could tell the tomatoes had simmered a long time. The chicken had a surprisingly crunchy bite, apparently pan-fried with a little dusting of flour. It was topped with a broad slice of mozzarella, more chunky sauce, and a sprinkling of fresh parsley and parmesan cheese. It was certainly the right size for a lunch portion. 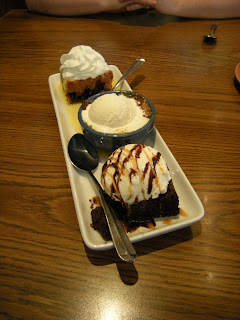 We decided to be a bit decadent and went for dessert -- after noticing Mimi’s Sweet Ensemble ($5.99) on the Seasonal Favorites menu. I like to sample, and I was expecting small portions we could share without being overwhelmed by a large dessert. Imagine our surprise when our dessert arrived -- a long plate bearing three full-sized desserts. Considering how many cities I’ve traveled to where any dessert might have busted $6 apiece, I was surprised by the generous portions. 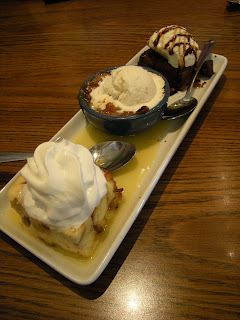 Chocolate Brownie was much crisper and chewier than imagined, and the spoon provided couldn’t permeate the tough surface. Once the ice cream on top melted, it was much easier to consume.

We found better success with the Fresh Apple Cinnamon Crisp, with its tart and meaty apple slices and crisp crust. The Vanilla Bean ice cream was a perfect accompaniment.

My favorite, though, had to be the Mimi’s Bread Pudding. I am such a bread pudding snob… and after experiencing cold congealed masses of dead soaked bready stuff so many other places, I found that this pudding was light and delicious. The meringue-like texture was full of eggy flavor, with the occasional plumped raisin under the whipped cream topping. But it was the rum butter sauce by far that won me over. 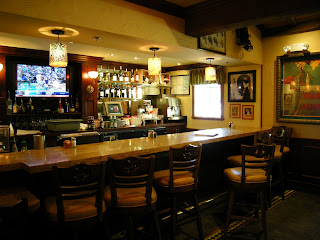 This repast was more than we could consume at lunch, and some came back home with us. It’s certainly a decent place to grab a bite, even if it’s a chain restaurant. I don’t normally review chains, but this one was pretty darn good.

You’ll find Mimi’s Café in Little Rock on the Garden Ridge parking lot, near the intersection of Chenal and Bowman. It’s open from 7am to 10pm, til 11pm on Friday and Saturday, and breakfast is apparently available whenever they’re open. Call (501) 221-3883 or check out the website.