My impression of how BBQ ought to taste.

Being an Arkansas resident that travels through the American South on occasion, I have consumed my share of barbeque. I've sampled dry rubs and wet ones, brisket and chicken, chopped meat and sliced meat. Before I developed my adult allergies, there were few things in this world that outclassed sloppy pork ribs in my book.

I've had sauces that have ranged from thin and vinegary to thick and spicy. I've dabbed on molasses doubling as sauce and savored Texas style brisket without it. And everywhere I go, I tend to find a favorite barbeque palace to frequent.

But there's just one place in this world that makes a barbeque that tastes like what I think barbeque should taste like -- to the very essence of the meat and the thickness of the sauce. 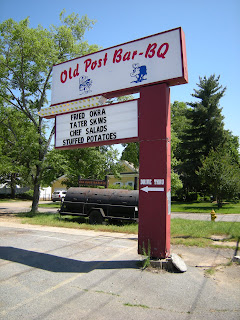 I was introduced to this Arkansas Avenue eatery my first week of college while hanging out with other members of the Arkansas Tech University Band of Distinction. As with many of our get-togethers, dinner was a pick-up affair, with meat and bread and fixins for 200 hungry musicians and flag line members. Though I'd grown up on the sweet vinegar tang of Sim's and the smoky full-body taste of The Shack, there was something about this particular sauce that just shook me awake from my epicurean sleep. Between good smoky and juicy meat and a hearty well-balanced sauce, I was happy and satisfied. 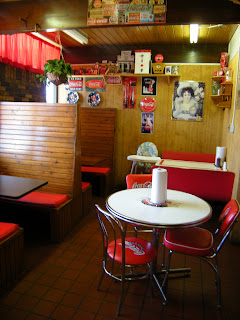 Years went by, and I moved, first back home to Little Rock, then up to Jonesboro, and eventually back home again. Over those years, there was the occasional impulse drive to Russellville for the three pillars of culinary civilization: Whatta-Burgers, Stoby's cheese dip (until it came out in grocery stores), and Old Post Bar-BQ sauce. From Jonesboro it would be about a five hour round trip, with a pit stop somewhere, and you only had to get out of the car once -- since Whatta-Burger didn't have a drive-thru. While my colleagues at the TV station were making beer runs to Harrisburg, 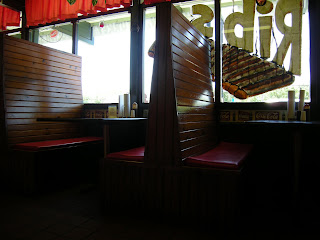 I was thrilled to be able to make the round trip back before gas last topped a dollar a gallon.

Preparing for a five day stint along the northern section of Scenic Byway 7, I overnighted in Russsellville, hoping a good night's sleep would start me off on a great adventure the next day. But before I even checked in to my room, I ran by for a late lunch at Old Post, to quench the need for good sauce and iced tea. 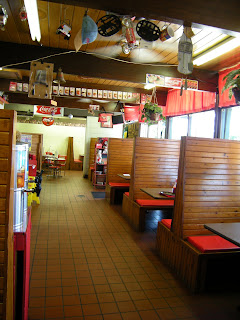 The restaurant changes little from year to year, though every couple of years they shut down for a bit and do a thorough cleaning from top to bottom (maybe it's a Russellville thing; Whatta-Burger does it, too). Booths are private by nature, with high wood-beam backs that are surprisingly comfortable. There are tables, too -- and lots of Coca-Cola memorabilia, too. In fact, unlike a lot of local restaurants, Old Post doesn't split its loyalties between the Razorbacks and Tech's own Wonderboys. During sports seasons, it's the Cyclones (Russellville High's team) that you'll see promoted here. 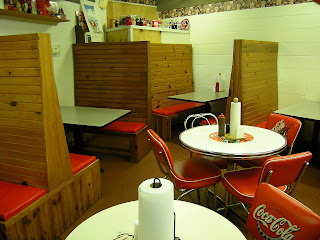 Old Post Bar-BQ offers a lot of different choices -- if you like meat. The menu sports an array of dinners -- sliced beef, pulled pork, smoked ham and turkey, Polish sausage, chicken, and ribs. There's the sandwich choices -- any of those plus French Dip in regular or jumbo sizes. And there's a nice variety of sides -- beans, slaw, potato salad, fried okra, mac and cheese, Kurley Q Fries and banana pudding. They offer a mean Chef's salad with your choice of smoked meat, stuffed baked potatoes, and chicken nuggets for the kids. Add in fried pickles and tater skins, and that's about all there is to the menu. 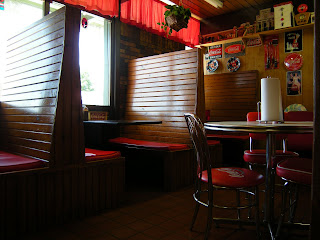 On this particular Tuesday in May, I dropped in with a hankering for a chopped beef sandwich. I was rewarded with the Old Post Special -- a jumbo sandwich with your choice of meat and two sides. On Mondays and Tuesdays, they throw in a drink with it. I placed my order and sat down.

You can hear the hum of conversation easily in the restaurant -- a family of three talking about a dog the son was hoping his mom would let him keep, a couple of old men talking about high gas prices. From the back the patter of gossip ranged from what was interesting on Dial-A-Trade that day to what one of the younger girls was planning to do for her wedding. The sizzle of the deep fryer signaled the okra was in the grease, and soon a young woman brought me a red tray with my lunch. 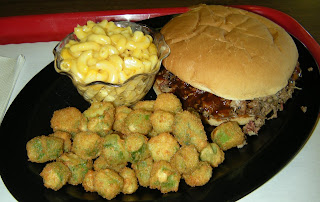 Like most places around these parts, you get fed. A lot. My beef sandwich took up an end of the oval platter, shared with a mess of fried okra and a cup of macaroni and cheese. The beef isn't the dry stuff of chain restaurants. Instead, the natural juices of the brisket are allowed to remain with the meat, making it juicy enough to eat without the sauce. But the sauce? Oh my. Can't go off without that sauce. It's the perfect balance between sweet and tangy, smoky and spicy. 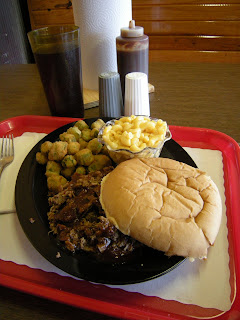 The okra was nice and light -- obviously just-cooked, as evidenced by the heat. The mac and cheese is soft but not "gloopy" like you get at places where the sauce comes out of a can. Paired up with a cold iced tea, it's a lovely sight.

There is one thing about this sandwich that differs from many Arkansas establishments. Here, cole slaw is a side item, not a condiment, and unless you ask for it you won't find it between the buns. However, this also reduces your sandwich to a fork-only proposition, since the bottom bun disintegrates below the heft and juice of good meat. That's all right -- this is one place where you can find a real metal fork.

If you go by and get yourself a take-home order, be sure to invert your sandwich over onto the top bun before you go to eating -- this will save you a mess in the car and allow you to taste some of the fresh bun as well. Never fear -- Old Post Bar-BQ also offers family packs for four or six -- where the meat, sauce, and bread are all packaged separately. I picked up one of these packs on the way back home the following Saturday, and it kept nicely on the drive back to Little Rock -- along with the four (four!) side items -- potato salad, mac and cheese, fried okra, and banana pudding. 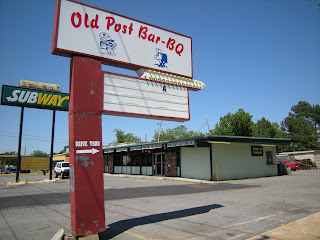 On some days, the restaurant also offers local favorites -- maybe a pie or a cobbler, or devilled eggs. You can't go wrong with any of it, as far as I'm concerned.

Old Post Bar-BQ has been in the same location since the late 1970s, right there at 407 South Arkansas Avenue, sharing a building with Subway. Chances are, they'll still be there 30 years from now. And if you want some of that sauce, they now sell their own brand for $4.50 a bottle. Call ahead orders are welcome -- (479) 968-2421.