No Longer Falling Down.

An eclectic decision placed a piece of London in the middle of the desert, and it’s still drawing visitors today.

It’s amazing, the places that curiosity will take you. And curiosity alone is what brought myself and my traveling companion to the banks of Lake Havasu City in early March.

We were headed back from Las Vegas. We’d taken Highway 95 in from the cutoff through Laughlin through the mountains, and didn’t want to go back the same way. Going across Boulder Dam was straight out, so we decided to skip the turnoff right past Cal Nev Ari and keep going south.

That took me on my one and only trip into California. I’ve punctured the border, but never stepped foot in the state. We drove down to Needles, where we picked up I-40 and drove on into Arizona. 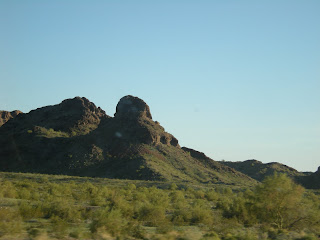 We stopped for gas just inside the border, and noticed a sign for London Bridge. I just assumed it was a town name, but my traveling companion insisted she remembered a story about a bridge that had been brought over stone by stone from England. After a little consideration, we decided to go check it out. 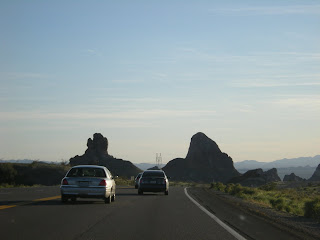 There was no mile marker on the sign, just an arrow. We headed down a two lane highway, between standing stones and scrub brush. About the time we decided to turn back, we saw a sign for London Bridge Road. Well, it’d make sense to go back that way, wouldn’t it? 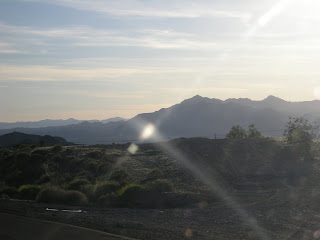 The highway we were on wasn’t bad, but the road we pulled off onto had seen better days. It took us by marinas and motels and car lots. We passed a giant chicken in a restaurant parking lot at one point. And we kept getting further and further out. At one point, we wondered if someone had been mean enough to just name the road London Bridge to see who’d take it.

Just about the time we’d decided to turn around (for the second time!), I saw a bit of an old neon sign with the pattern of the Union Flag. We pulled into the parking lot. 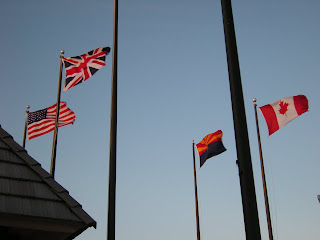 And here we saw a little bit of what appeared to be an English Village. Four flags flew overhead -- Arizona, United States, Canada, and Great Britain. The fountain they flew above was empty, but dragon headed lions proclaimed this was the city of London. 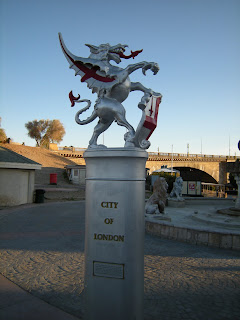 The visitor’s center at the entrance was closed (this was, after all, early March) but there were strategically placed photo opportunities, including a red British phone booth, Tudor style buildings, and more. A closed restaurant led down to the canal -- over which was perched an enormous stone bridge. 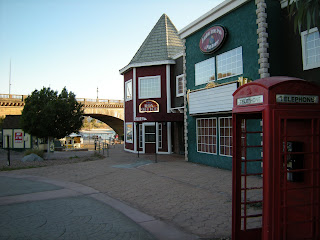 The massive stone bridge was originally finished in 1831 in, of course, London. John Rennie, the man who came up with the five arch design, perhaps couldn’t conceive of a time when London’s population would reach the multi-millions, nor could he determine then that the bridge would one day carry tens of thousands of cars a day over the Thames. Probably didn’t occur to his son, either -- who saw the bridge to its completion. Didn’t really matter -- in 1831, it was da bomb, and a grand way to cross the river that divided the city. 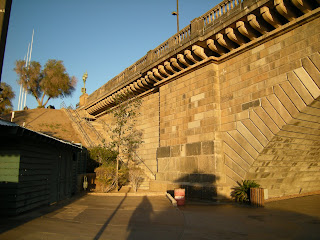 Years passed, and the population increased, and so did the traffic. The bridge started to sink into the clay of the river. By 1924, one end of the bridge had sunk down three or four inches lower than the other. It was sinking at a rate of an inch every eight years. London’s engineers tried all sorts of things to alleviate traffic congestion… widening the bridge from 52 to 65 feet, propping it up with more pillars, all to no avail.

Other bridges were constructed across the Thames, and eventually the decision was made to tear the old bridge down. But even this would be a colossal burden on the city’s budget.

That’s where Ivan Luckin came in. The member of the Common Council of the City of London served on the Bridge House Estates Committee in the sixties. He came up with the idea of selling the bridge -- and people thought he was crazy. Indeed -- even after it went on the market, it sat there and stubbornly didn’t sell. That is, until April 15th, 1968, when American businessman Robert McCulloch of McCulloch Oil Corporation plunked his signature down on a contract to purchase the bridge for £1,029,000 (approximately $2,460,000).

A lot of folks thought McCulloch was nuts. Rumors spread that he thought he was purchasing the Tower Bridge instead, the one with the towering buildings on it. Not the case. McCulloch had a vision for the structure.

He knew what he was doing. 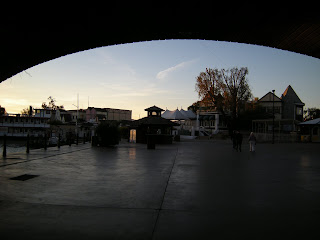 McCulloch had put a lot of money and inspiration behind the creation of Lake Havasu City, a community founded on the eastern shore of a manmade lake. From its inception in 1963, it was advertised as being an oasis in a desert. How could anyone resist the idea of all that water in an area where it hardly ever rained? 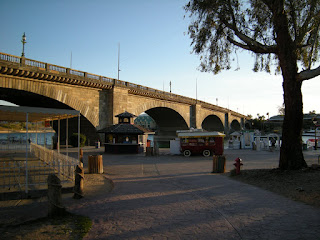 But McCulloch knew it’d be hard to get a lot of folks to come check out the city if there wasn’t something else to draw them in. So…how about a tourist destination? And what better than a piece of history from overseas to draw them in?

The bridge was disassembled over three years, each piece carefully hand numbered for reassembly in the states. Ship after ship crossed the sea with the stones from the old bridge. They were brought out into the desert, where most of the stones were assembled over a concrete frame over a dry canal especially built for the bridge. Some of the stones were left behind in Great Britain to pay the taxes on the sale. Others were distributed out as souvenirs. It cost $8 million to move the more than 10,000 stones and bricks to America.

Once the bridge was nearing completion, the canal was completed, and water flowed from Lake Havasu through it into Thompson Bay. On October 10, 1971, a grand ceremony was held, and the bridge was opened for business. 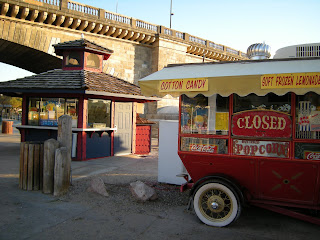 An English style village was constructed at the east end of the structure, to take in the visitors that McCulloch was certain would come. And McCulloch was busy with other things, too -- like moving his operations to Lake Havasu City from Los Angeles. He built plants in the area, and convinced trucking companies and other businesses to relocate there. But by far, the area most attracted real estate developers, who marketed Lake Havasu City as an escape from West Coast woes. 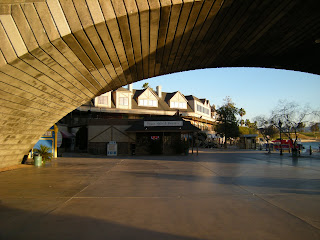 McCulloch himself passed away in February 1977, but the area continued to thrive. Hundreds of thousands of people would come out every year to view the bridge and spend a bit of money at the British Crown Colonies Resort Park or any of the other souvenir and photo-op places along the way. 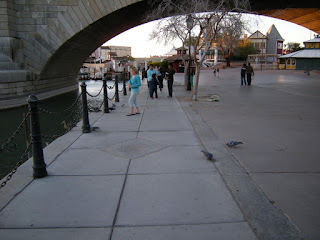 Maybe it was the time of year, but on our visit most of the attractions around the bottom of the bridge were closed. There was a dock, several concession stands, even a restaurant - all closed for the season. But there were also people out, a couple dozen adults and kids doing what we were doing, gawking at the 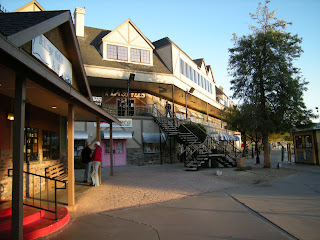 bridge and avoiding the ducks.

There are small boats you can rent, and an old steamboat (which seemed to be a little out of place to me), and a lot of other shops further along the east bank. I could see where non-tourist businesses like hair stylists and dollar stores had cropped up in the center. 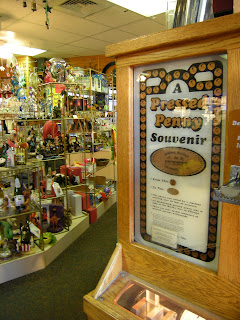 We ducked into an open souvenir store, and looked over the merchandise. A lot of the items inside were the expected -- the ubiquitous pressed penny machine, shot glasses and spoons promoting Arizona and the bridge, posters, t-shirts, hats. I was a little startled to see the standard “hillbilly” souvenir here -- Complaint Department signs on raw wood, and other similar items. 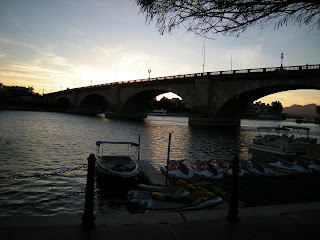 Back out we went, sorry we couldn’t stay longer. I snapped off more pictures, catching the big bridge against the sinking sun, its gas lights starting to come on. Underneath the edge of the bridge, I spotted a solid row of swallow nests that went from one side to the other, just like I’d seen under the Highway 5 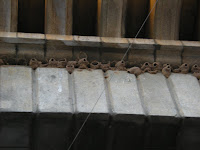 bridge at Calico Rock back home. Some things don’t change.

If you’re out on Interstate 40 in far western Arizona and have a little time to kill, go seek out London Bridge. It’s rather massive, and interesting to think that something that big could be brought over here for us to enjoy. You’ll find Lake Havasu City roughly 18 miles south of I-40 on Highway 95. There are plenty of little restaurants to munch at, and you can listen to oldies on KBBC 980AM.
To purchase this article, email Kat Robinson at 4/22/2008 11:36:00 AM