The French Quarter -- home of Jackson Square, beignets, history, and Bourbon Street. The Crescent City could easily be called the City That Sleeps In; breakfast restaurants (outside of the Café du Monde) mostly open around 8 or 9 a.m. Many travelers forsake early morning excursions so they can sample NOLA at night. 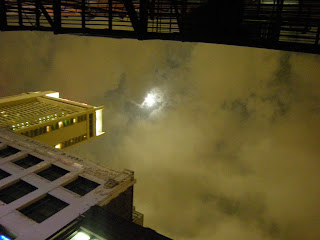 Problem is, what are you going to eat in those late night hours? Sure, there’s a bar every couple of feet along Bourbon Street; but for some of us folks past our twenties, going out on that neon-lit alcohol-drenched boulevard after dark holds about as much interest as walking from the swine bar to the beer cart at the State Fair. Worse still, most of the eateries along that strip (outside of the odd pub fare location or Krystal’s off Canal) start closing down around 11 p.m.

I’ve been fortunate to find a couple of places around that offer better-than-average late-night fare, the local favorite Coop’s Place on Decatur among them. But what if you’re not searching out Shrimp Creole or Rabbit-Sausage Jambalaya? What if you’re wanting healthier fare?

It’s not that far away. 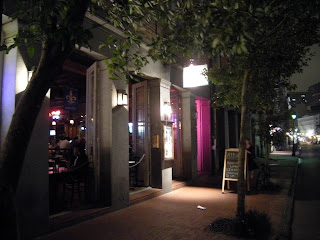 On a humid Tuesday night in March, my traveling companion and I stumbled across an inviting doorway along the Canal Street end of Decatur. We first thought it was simply a hookah bar, but the scent of cooking kebabs told us otherwise, so we went in. This was our welcome to the Attiki Bar and Grill.

The restaurant has a variety of seating options -- couches, short tables, tall tables, a bar. We had a seat in a corner at a tall table, and as we sat a waitress was already on-hand to provide us with menus. 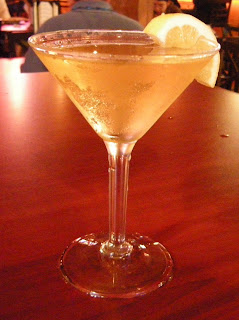 Noticing that many of the other diners were consuming martinis, I went ahead and ordered one to try. The Sun Kiss is a blend of Stoli Ohranj and Grand Marnier… unfortunately, it’s a rather stout combination, and I soon found myself asking for water as well.

The tri-fold menu was full of snacking and dining options. A wide variety of salads, kebabs, seafood dishes, and sandwiches gave us plenty of options -- probably a few too many, being as late as it was. After chewing over the menu for a while, we settled on a Mazze plate and a Combination platter.

Each of the dining selections on the menu include a paired beverage -- a wide variety of wines. The sandwiches included burgers and “sandwiches on French bread.” Apparently this Mediterranean eatery didn’t presume to know how to make a proper Po’ Boy, though the fried oyster sandwich ordered at the next table did bear a fine, overstuffed resemblance. 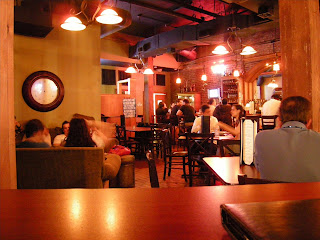 The crowd was incredibly varied -- twenty-somethings sharing beverages and a hookah on a couch, an older couple at the bar, various singles and groups here and there. The music was heavily influenced with bhangra (think of a cross between traditional Indian rhythyms and tones, hip hop, and trance) but it wasn’t overpowering, and we didn’t have to struggle to hear each other. 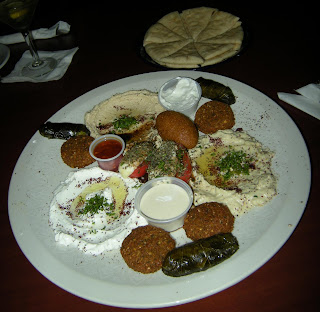 Our Mazze platter ($18.95) came out first -- a much larger offering than I had anticipated. Our waitress brought out separate sampling plates for the both of us, along with the proper serving ware for such a repast -- big fresh and soft wedges of pita bread. Three sumptuous and generous dollops of babaghanough, hummus, and lebneh accompanied a fine selection of grape 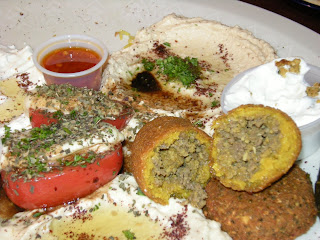 The buffala (sliced tomatoes baked with imported mozzarella cheese and basil in olive oil) was a refreshing surprise. The tomatoes were still crisp, but had incorporated that lovely basil flavor. The kibby was something completely new to me… ground beef, onions, and pine nuts wrapped in a cracked wheat crust and fried… savory, crunchy, and juicy all in one mouthful.

The falafel came with a yogurt cream sauce that did nothing to detract from the crispy and well-seasoned chick pea patties. The grape leaves, which I find to usually be hit or miss, were hearty little morsels filled with rice and ground beef. The hummus was excellent, the babaghanough creamy, and the lebneh with its pool of olive oil topping was exquisite.

The platter was served up with a spicy clear red sauce, which my traveling companion savored -- and a small container of tziki, which was lovely and refreshing after sampling the red sauce. 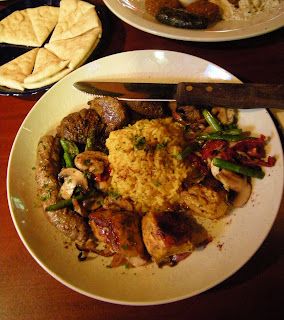 Before we could even get halfway through the Mazze plate, out came the Combination Platter -- a rainbow of grilled meats and vegetables served up with saffron rice. You actually have a choice with all of these dinner kebabs -- two sides, including the steamed vegetables, the saffron rice with pine nuts, garlic new potatoes, fries, or house salad. Viewing our dish, I believe we had made the correct choice. 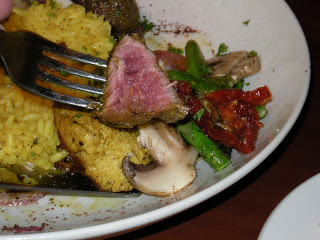 The Combination Platter ($19.95) includes three of the more popular kebabs Attika Grill serves… prime steak tips, chicken, and shish kebabs. The seasoning on the steak tips is a traditional Greek seasoning reminiscent of Cavendar’s, with just a hint of mint. It’s served medium rare, unless you specify otherwise.

The chicken is more delicate -- with hints of cumin and turmeric. The shish kebab is served as one long sausage (don’t worry, a big knife comes with the platter) full of Middle Eastern spices and not at all hot. Rather than segregating the steamed vegetables along the side, they’re all over the platter -- deliciously seasoned mushrooms, asparagus spears, onions, and sautéed reconstituted sundried tomatoes. They all compliment the meat quite well. 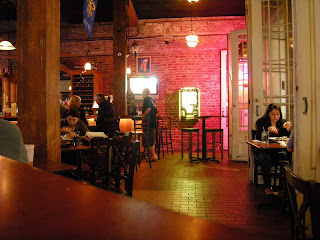 We found ourselves too full to sample the dessert selections -- a choice of baklava, tirimisu, or chocolate cheesecake. We also passed on Turkish coffee and hot chai, realizing that unlike the tourists here we had to get up early in the morning and work. But we’ve promised ourselves an afternoon 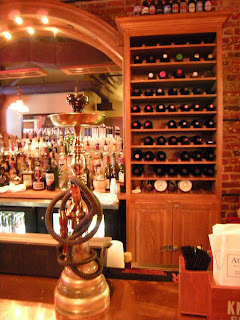 next time we’re in New Orleans, to come in and relax with some of that baklava and Turkish coffee while reclining on a comfortable couch.

If you’re stumbling around looking for a good meal late at night and don’t want to venture far off Bourbon Street, check out the Attiki Bar and Grill. It’s on the same block of Decatur as the House of Blues, but a lot quieter. The physical address is 230 Decatur Street -- you can also call (504) 587-3756 or check out the extensive website at attikineworleans.com. Oh, and they also serve lunch.
To purchase this article, email Kat Robinson at 4/10/2008 10:04:00 AM