A simple goodness even Eric Clapton would enjoy - Layla's in Little Rock. 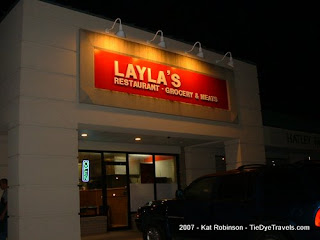 Or, maybe not. It is a big assumption. But there can be no talk of Layla without Clapton.

However, you won't find any memorabilia from Cream or Blind Faith on the walls at the relatively new Rodney Parham eatery... just a lot of Mediterranean options on a simple one page menu.

Layla's Restaurant, Grocery, and Halal Meat Market opened quietly a few months ago in the space formerly occupied by Eureka Pizza, across from the car wash near Treasure Hills. Friends of mine, fans of the fabulous Greek Food Festival, have been encouraging me to try out the restaurant for months -- but my travels have kept me on the road and away from Little Rock.

Yet, on a Friday evening in December, I found myself hungry for a gyro. So my traveling companion (my husband) and I headed over to the store. 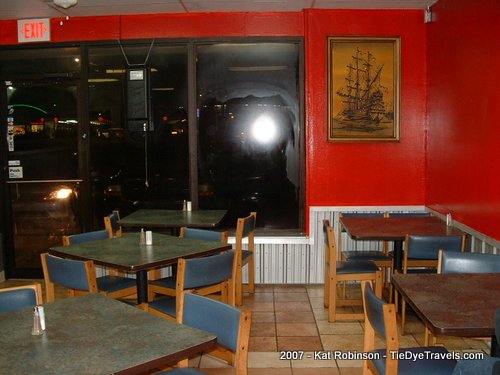 The restaurant itself is spotless... with ruddy red walls adorned simply with abstract pictures. The creamy peach colored tile has been patched together where walls were removed and reconstructed with the new restaurant. Chairs are covered in blue, tables are a lovely marbled gray, and a long counter lines the west wall. This night, we were the only ones around save for a genial gentleman and a quiet lady, cooking up a storm.

We were directed to take a seat, wherever we wanted to. We chose a spot by the wall so we could observe. The gentleman behind the counter came out and answered our questions about the dishes. We perused a wide variety of ethnic dishes, calzone and pizza, before deciding on more adventurous fare. 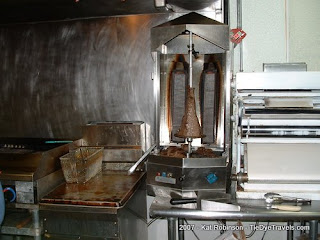 While we waited for our meal over large glasses of very flavorful iced tea, we watched as our meals were started up from scratch. Yes, it took a while to prepare. But that was okay. We shared tales of our day as our dinner was created.

A family of four came in and sat at a nearby table. From the accents, it sounded like they weren't from anywhere near the South. A quick conversation confirmed that they were from Great Britain, where Mediterranean fare far outstrips the Olive Gardens and such around America. They were regulars. They chose a selection of calzones and appetizers from the menu.

I went and peeked around at the grocery section... there aren't many items for sale, but what's there is well organized. In another room, another lady worked on butchering meat in the hilal fashion.

Shortly after I returned, our food arrived, along with our host and his many questions. He checked with us over and over again to make sure we had everything we needed. 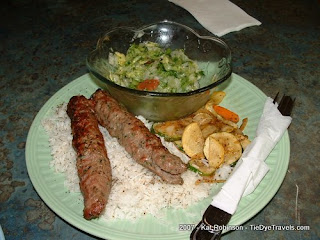 And boy, did we. Our dinners were palates of artistic color. My traveling companion's Kafta Kabob was enticing. Two lengths of spiced and grilled ground beef graced a generous pile of seasoned rice. They were accompanied by a grilled vegetable selection of sauteed onions, squash, zucchini, carrots, and pepper. The Mediterranean salad was lettuce chopped fine with a vinaigrette, chunks of tomato, and tiny bits of olive. The salad was just the right balance between savory and tangy, and the vegetables complimented the kabobs well. The spicy kabobs are heavy on the parsley, and come with a cool yogurt sauce for dipping. The whole plate ran $8.50. 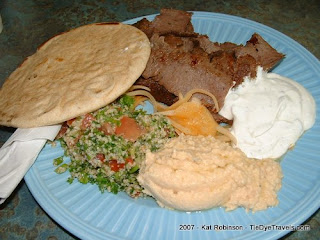 I would have envied my companion's dinner, but I was blessed with the gyro plate. Instead of the meager offerings I expected, I was greeted with a large pile of meat and a complex selection of accompaniments. The tabbouleh, all green and gorgeous, is heavy on the lemon and parsley -- almost too much parsley for my tastes, but well balanced when taken with a bit of the tangy marinated onions. The hummus? Perfect -- without the vinegar wang of store-bought products. I haven't had such a good tzatziki sauce in years -- full of onion but not overwhelmed with it. The pita was fluffy, and the gyro meat itself packed with flavor and fork-tender.

It was a bit much, though... to the point that I was calling for a take-home box before I was at the halfway point. But for $8.50, I ended up with two sizeable meals of great Greek food... can't beat that. 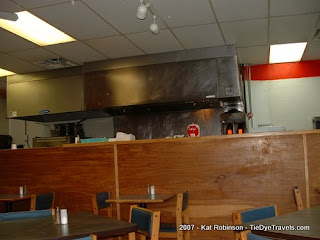 Layla's sells a variety of other items, including hefty calzones that run in the $6.50 to 6.75 range, and nine inch pizzas that are about $6 each. You can also choose to have your gyros and kabobs as pita sandwiches for $5, and there's a half pound burger for those who must have American fare. There are also the other staples of Greek ethnic food available: hummus, baba ghannouj (baked eggplant puree with tahini and spices), salads, and tabbouleh.

If you get the chance, run over to Layla's for a bite for lunch or dinner. It's located in the Treasure Hills Shopping center at 9501 Rodney Parham. Call ahead and order if you wish -- that number is (501) 227-7272. They're open from 11am to 8pm Monday through Thursday, til 9pm on Friday and Saturday and from noon to five on Sunday. 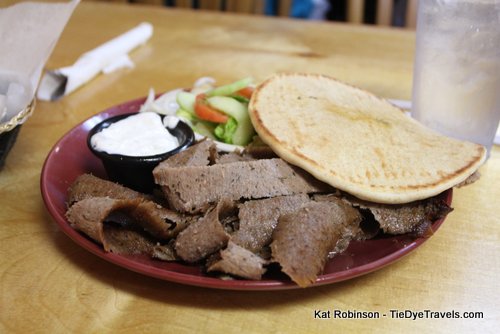