A block of Malvern. 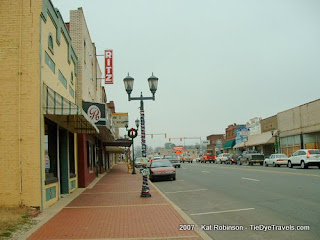 Ask some about Malvern, and they'll tell you it's the home of Acme Brick. Others will say it's a place to stop on the way from point A to point B.

One December afternoon I found myself a couple of blocks off the intersection of Highway 67 on Highway 9, just a block and a half from the big rail bridge. I decided to get out and take a look around.

The building that caught my interest was the old Ritz Theater. It's taken a little remodeling over the years, but is still housed in the same building from years past. Unfortunately, the box office doesn't open until late in the evening. 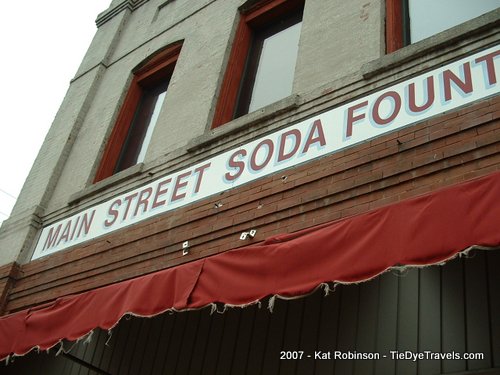 Just west of the Ritz are a couple of buildings and a lot. The building on the corner announces itself as the Main Street Soda Fountain, which sounded great. But my dreams of a chocolate phosphate were dashed when I walked up to the darkened front door and noticed the For Sale sign. 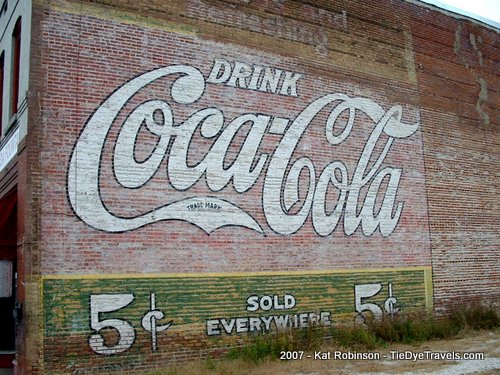 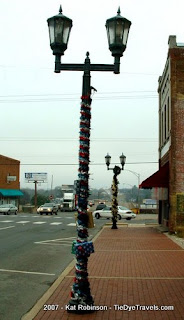 The side of the building bears a massive two story Coca-Cola advertizement. I remember seeing this when I was a kid. I wonder if it's been retouched some... it's still clear after all of these years. The sign proclaims to all passers-by that the popular beverage is sold everywhere at the bargain price of a nickle.

Up and down the street, the old fashioned light posts are adorned with all manners of Christmas and holiday cheer. Some of the posts have seen obvious wear, and lean a bit one way or another.

I crossed the street and started looking into storefronts. There's a thrift shop on the corner with all manners of clothing and dishes inside. I passed on it, and strolled down further. 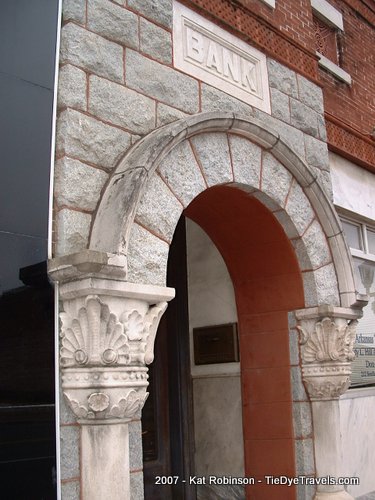 A couple of doors down is an attorney's office, nestled in an old bank building. How can I tell? Oh, maybe the big stone archway that still proclaims the building's original purpose. The gray granite is striking against the deep red bricks. 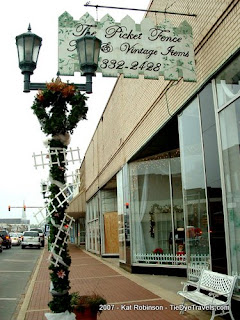 Next door, there's the Picket Fence, a consignment shop that carries a variety of antique and craft items. I went in for a look, and came out with a remarkable scarf of many colors that my husband immediately claimed when I got home! 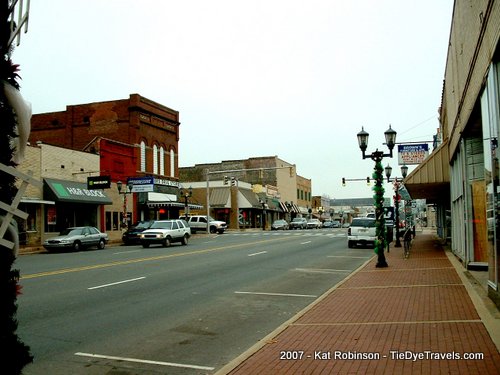 Past the Picket Fence, there are several empty buildings. The construction looks fine, but the businesses here petered out, for whatever reason. There is a gym housed in one of the units. 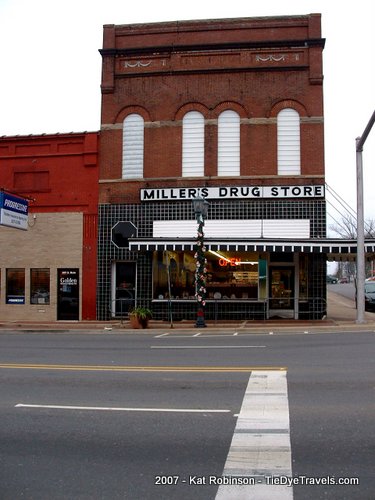 Down the block and on the other corner, is a pharmacy. Miller's Drug Store appears from the front to be your average, run of the mill store from the outside.

But step within, and you're transported to an art deco age unblemished by time. 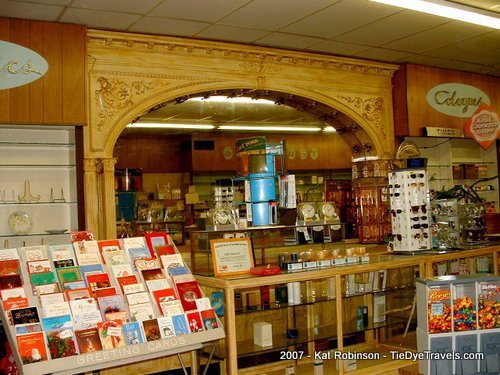 A giant cashier's bureau huddles against one wall, its scrollwork lightly guilded, the big bureau pinned between glass and wood cabinets for cosmetics and colognes. Before it, displays of all sorts, including alarm clocks still encased in their 80s plastic.

Two rows of fluorescents light up the store, illuminating the deco headings on the wood toppers to the cases. 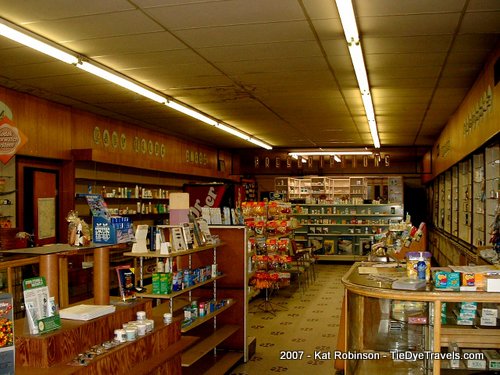 On the east wall, drawer after drawer conceal the little items that make a drug store run. There's everything you could expect here, from analgesics to heat wraps to candy for the kids. Every area is clearly labelled for your perusal. 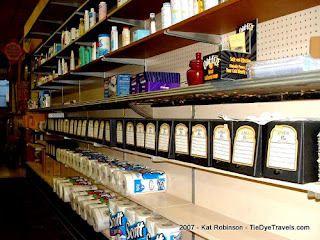 Straight back is the pharmacy counter -- which has been in use since the 20s. Three generations have run this drug store, and little has changed. Patient prescriptions are still held in the little boxes along the west wall cabinet, each in precise alphabetical order.

Miller's Drug Store started out in the late 19th century in another facility. It was moved here during the 20s and hasn't moved since. Unlike other places that might have felt compelled to keep up with fashion, the decor hasn't changed.
If it wasn't for the newer products here, you could mistake this for stepping back in time. 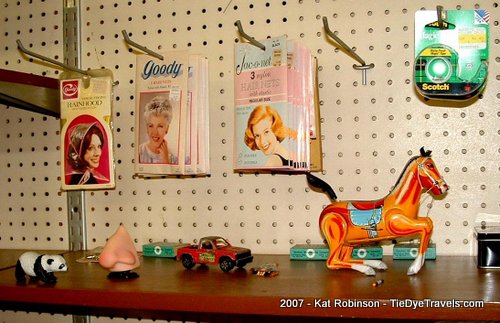 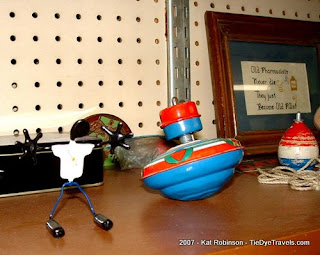 Back by the pharmacy, there's an odd display of old toys and knicknacks -- a metal play horse, an old truck, rubber figures -- displayed right along with antique packages of hair nets and rain hoods. They bear the wear and tear of toys, not collectibles, and I could just picture what it was like to have children playing in the aisle, rolling toy cars along the lower shelves. 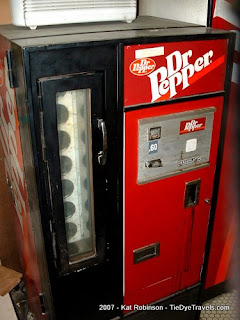 And halfway back up the west aisle, there's an honest-to-goodness bottle vending machine from decades earlier. I remember using this exact sort of vending machine as a kid -- dropping in change, opening the door and grasping my selection by the bottleneck. You can even still see where people who didn't know how to properly use the bottle opener splashed soda down the front. 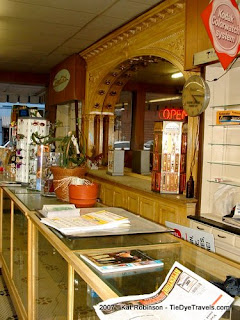 The old drug store is far from full. Many of the shelves are empty, and some of the merchandise is ancient. But the whole place is neat as a pin. It's obvious that the pharmacy is what drives this store and keeps it open.

And that's amazing. Just a block down the street, a Wal-Greens has moved in. With its commercial selection and drive-thru, you might think the store isn't long for its days. But the folks seemed to be determined to keep on going. 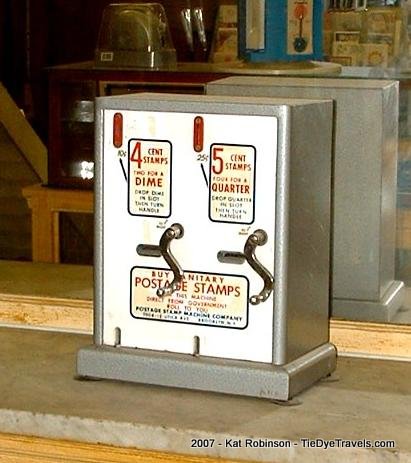 I spotted this old postage machine on the cashier's bureau. The better deal was apparently to get the five 5 cent stamps for a quarter, rather than the two four cent stamps for a dime. The "sanitary" notation comes from a time when dispensing from a machine must have seemed more civil than taking stamps from some postal clerk. 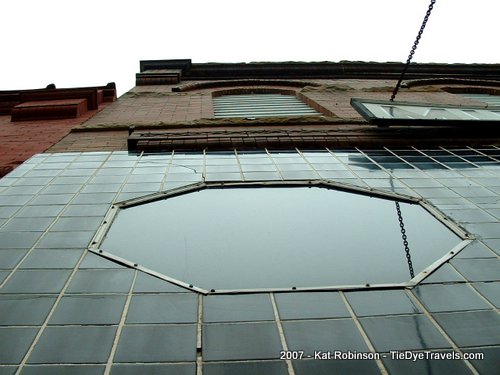 Outside, I took a closer look at the tile facing. There's a neat octagonal window that lends light to the staircase leading to the upper stories, but I couldn't tell you if the top floor is in use. 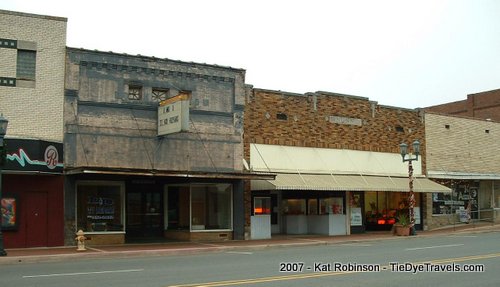 There are more empty shops along the way, along with a home decore store and a taekwondo academy. An electronics shop stands quiet and dark next door to the Ritz, full of all sorts of TV and stereo equipment that may be obsolete.

The Ritz Theater has shows at 7:30 nightly within its single 700 seat theater -- and sometimes a second show. It's closed on Mondays. I found out that the theater was opened in the 30s, and someone told me it had been for sale on eBay, but it's open now and seems to be in good order. The theater's phone number is (501) 332-2451.