A Peaceful Corner and A Welcome Quiet at the H.U. Lee International Gate and Garden. 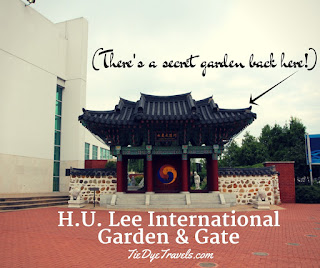 Incongruously set between a bridge and a convention center on a downtown streetcorner, this secret garden is open to all every hour of the day. Let's take a look inside the H.U. Lee International Gate and Garden, and learn the significance of its location in Little Rock. 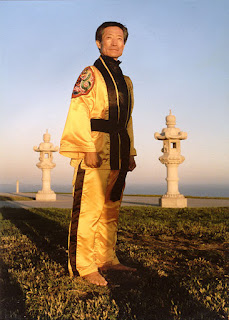 Haeng Ung Lee was born in Manchukuo, China to Korean parents. The family returned to Korea after World War II. As a young adult, Lee taught taekwondo to members of the Korean military before beginning his own school in 1959. After opening another school near an American Air Force base, Lee befriended a gentleman by the mane of Richard Reed, who in 1962 assisted him in Lee's emigration to Omaha, Nebraska.

In 1977, Lee created a fellowship of martial artists that grew into the largest martial arts organization in the world, the American Taekwondo Association. Since 1977, the ATA international headquarters has been located in Little Rock. It supports more than 1,200 schools in 20 countries on six continents. Lee was named a 9th degree black belt and given the title of Grand Master in 1990. After his death in October 2000, he was postumously promoted to 10th degree black belt and given the title Eternal Grand Master, the only individual at this writing to have achieved such a rank in the ATA. 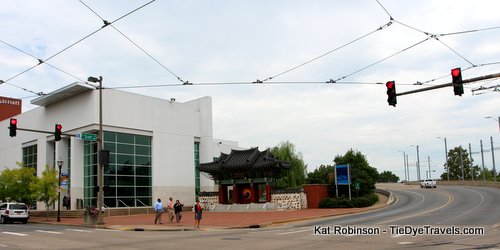 In June of 2006, during the ATA World Championship Taekwondo Association convention, ground was broken on the Songahm International Gate and Garden, and on completion the gate was dedicated in Lee's honor. 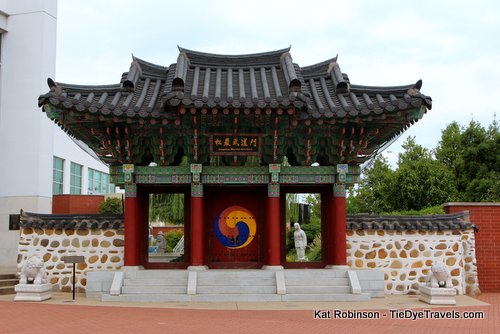 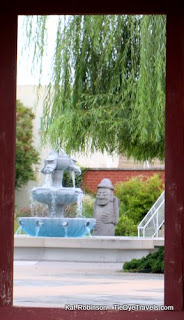 The gate, which stands adjacent to the Statehouse Convention Center at the corner of Markham and Scott Streets right next to the Main Street Bridge, is a blend of Korean and Arkansas materials. The stones that make up the supports and base are local, while the tiles on the roof are from Korea. The painted gate was created from wood shipped from America to Korea. It is decorated with Korean motifs, in traditional Korean colors.

Each of its doors frame a scene from the garden behind, ever changing with your location on the red brick without. While yes, you can walk around the gate, stepping through gives you the perspective of entering a quiet, peaceful place. 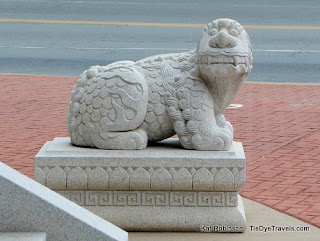 The outside doors area usually open for guests every day. The center door is reserved for special occasions.

Two Foo Dogs, beautifully handcarved stone dogs who symbolize protection, stand to either side of the gate. They were created by artisans in South Korea.

Gates like these are common in Korea, and they are a sign of welcome. If you look up at the entrance, you can see the intricate details in the overhead woodwork, paint details and such. 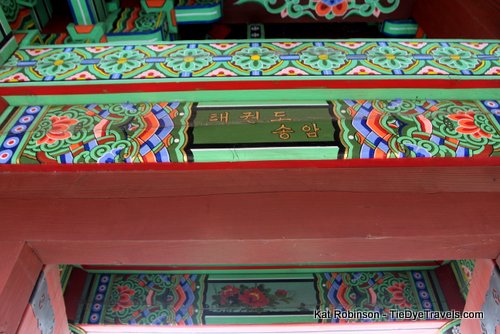 The entire gate weighs around eight tons. With the exception of the nails that hold on the roof tiles, there are no nails in the construction of the gate. 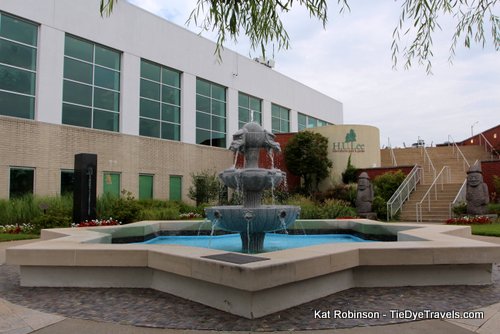 The garden itself spreads out alongside the convention center and offices below, Asian details highlighted in the garden against the stark white and glass of the box-like edifice along its west side. Benches dot the expanse, carefully placed but created to appear organic against the natural plant growth and statuary. 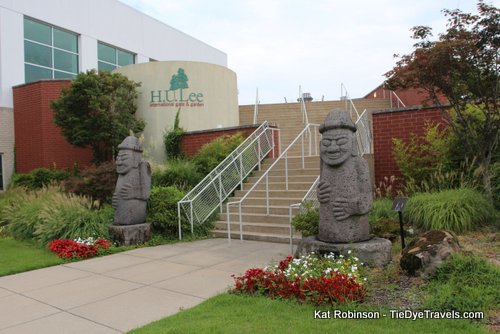 At its back, a grand staircase rises to the back patio of the convention center - and if you climb it, you can see most of Riverfront Park and the river beyond, along with the lower skyline of North Little Rock. 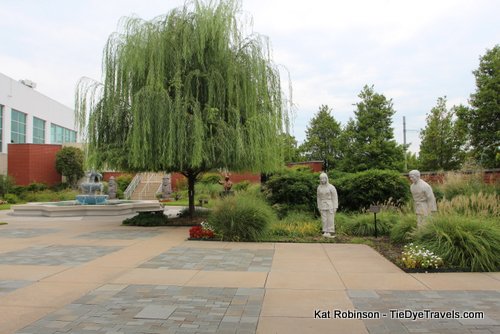 To the right as you enter, the statues of a man and a woman in traditional Taekwondo attire greet you with a respectful bow. 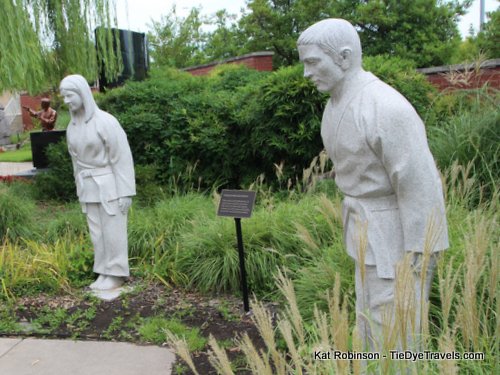 The particular angle of the bow and the hands held to the side in this manner serve as a greeting suitable to both junior and senior visitors. 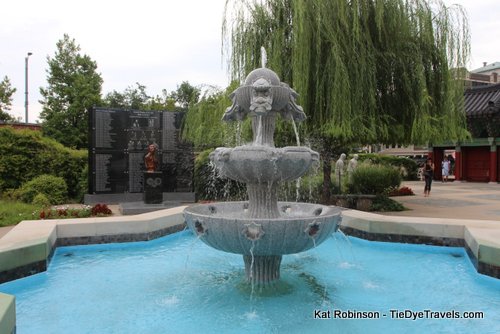 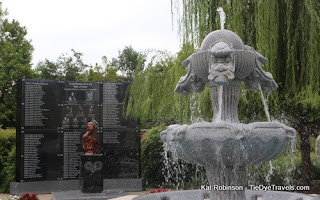 The heart of the garden is a reflecting pool surmounted by a three tiered fountain. This eight ton white granite fountain includes three dragons emanating from a pearl, from which the water flows. The layer below includes six dragons bearing pearls, while the 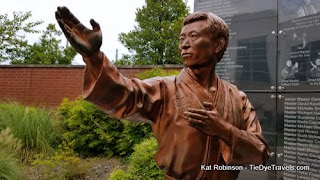 lower basin is pierced with nine Songahm stars. The flow of water from the pearl atop to the pool below symbolizes knowledge.

On the east side of the garden, a bust of Eternal Grand Master H.U. Lee resides, his hand every held out in instruction to students of Taekwondo. 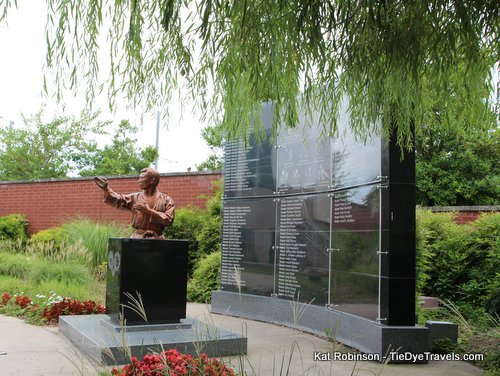 Behind the bust, a black wall contains the names of all the Grand Masters of the American Taekwondo Association. I've been blessed to make the acquaintance of many of those represented here. The Wall of Vision was created from Chinese black granite by Korean masters, and it weighs more than eleven tons. 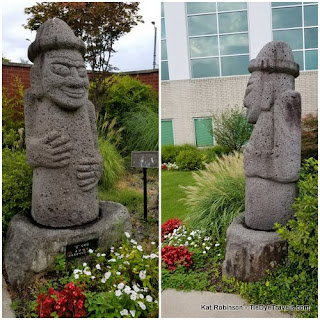 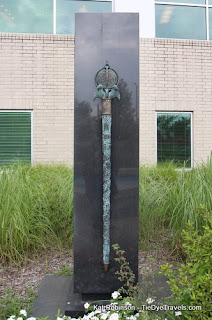 At the back of the garden, two Harubang statues stand watch on either side of the staircase. They are a gift from Cheju Island, South Korea, and their long noses and comical expressions were created in basalt (the lava rocks from which they are carved).

To the west of the fountain, the Staff of the Flying Dragon is displayed. According to the on-site interpretation, the staff's carving and details depict a story that starts at the bottom with Korean masters and ends at the top with Eternal Grand Master Lee receiving his belt. It details the development of the Songahm school of Taekwando. 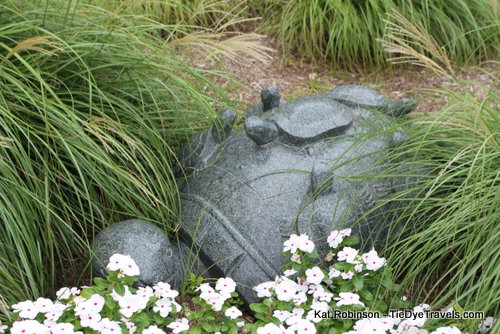 Close to the garden's southwestern point, a sculpture lies hidden in the grass. This is the Statue of Nine Turtles, a one ton carving that replicated a wooden piece still laying among Lee's effects at the ATA International Headquarters. The large turtle represents longevity, while the smaller ones depict family and unity. 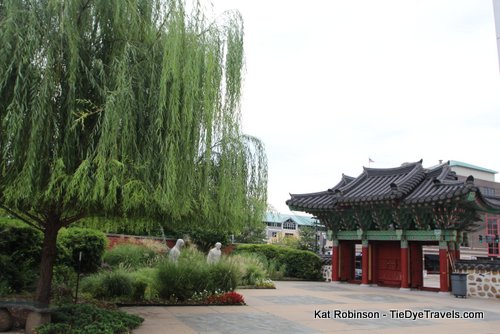 The garden sits at one of the busiest intersections of the city, right next to one of the city's biggest venues, and yet here it as if time stops. It is quiet, a lovely place to contemplate life, an unexpected corner of Little Rock. As I've put together this piece, I've been surprised by how many people I know who haven't visited this place.  Maybe we can change that. 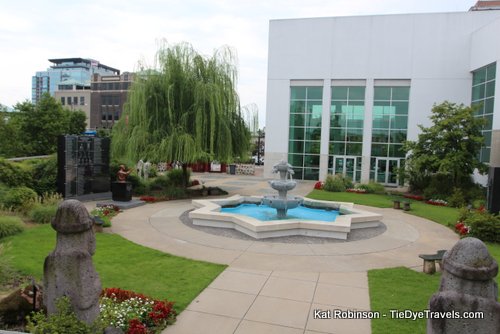 Such a quiet spot provides contrast to the impact the ATA has made upon the city of Little Rock. Each year, more than 5000 participants, along with their coaches and families and friends, travel to Arkansas's capital city to take part in the ATA World Taekwondo Expo. It's the single largest convention held in the city each year, and during the five days each June white- and black-robed men, women and children enjoy the city's wonders in-between activities and bouts. At that single time, the garden becomes a louder place. But it is always welcoming, and it is always open, 24 hours a day year-round.

Read more about the garden here.