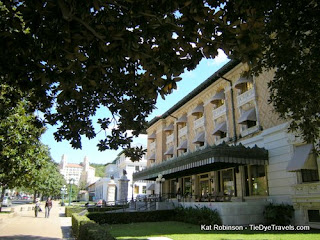 Journey from one end of the legendary boulevard in Hot Springs, Arkansas to the other, with all sorts of nifty bits of history and trivia. Let's get started.

Hot Springs National Park is unique among all national parks.  Originally designated a national reserve in 1832 it was admitted to the national park system as its 18th park in 1921.

The park’s preservation and history is based on its thermal waters, which bubble to the surface at a constant 143 degrees.  For centuries, Native Americans have congregated in this Valley of Peace, where the waters came through.  In the 19th century, the area became known for its allegedly curative waters, and doctors would prescribe a sojourn to this Arkansas Ouachita town for treatments and relaxation.  The federal government even made “taking the waters” available as a treatment for veterans and the poor.

Whether the waters truly healed or not, people did come back from Hot Springs rested and relaxed.  It became a peaceful meeting place for others as well, including baseball teams that would head south for spring training – and even gangsters from New York and Chicago who considered the area neutral ground. 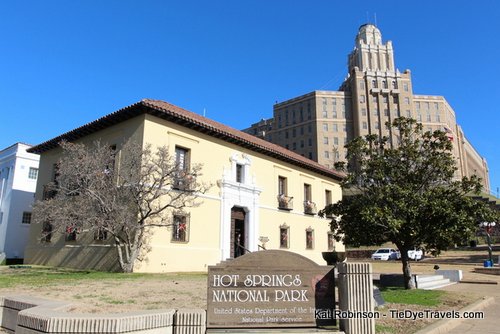 Today, eight bathhouses still stand along the eastern side of the famous Bathhouse Row.  Here’s what you’ll find when you visit.   We’ll begin at the corner of Central Avenue and Reserve Street, where the yellow Mission-style building houses the administration for the National Park.  This facility was built in 1936 specifically for the purpose of administrating the park and the bathhouses within. Out front facing Reserve, you’ll see an old fountain covered with algae.  On cold days, steam rises from the fountain – which is supplied with water that comes from the thermal springs below.

On the sidewalk, one of the park’s public filling stations is located.

Residents and visitors alike come to fill bottles with water to take with them.  It’s free and always open to the public.  You’ll often see people bringing several gallon sized jugs to fill to take home. 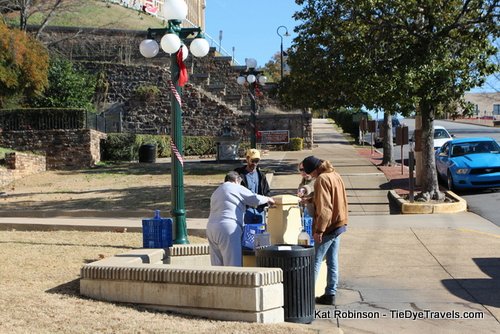 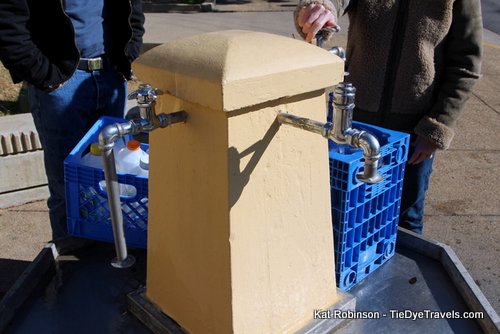 Here and at several other locations along the sidewalk, you’ll see cell phone tour information.  By calling the phone number on the sign and pressing the corresponding number, you can actually hear narration describing each of the facilities you’ll pass along the way.

Next door to the administration building, you’ll find the Lamar Bathhouse. 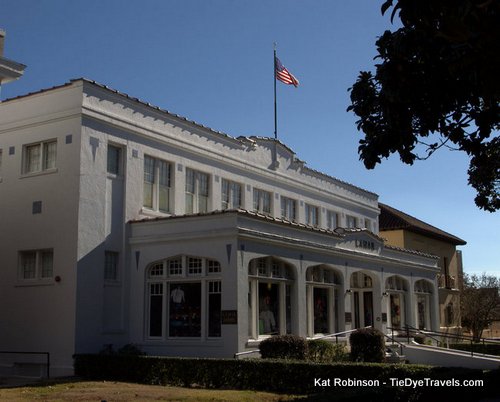 Completed in 1923, this was the temporary location of National Park Service activities while the Fordyce Bathhouse down the street was under restoration. 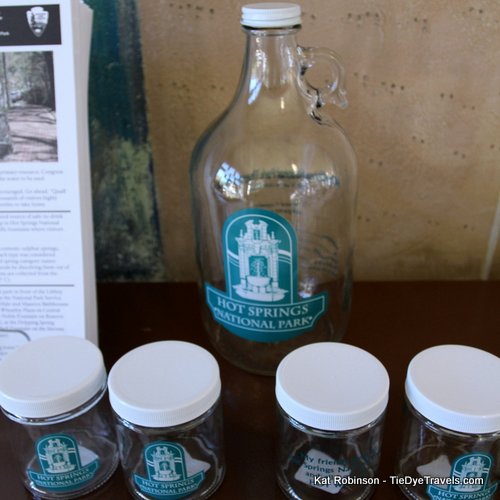 Today, you’ll find the NPS store, which offers everything from robes and soaps to souvenir vessels to use for drinking and taking home those thermal waters. 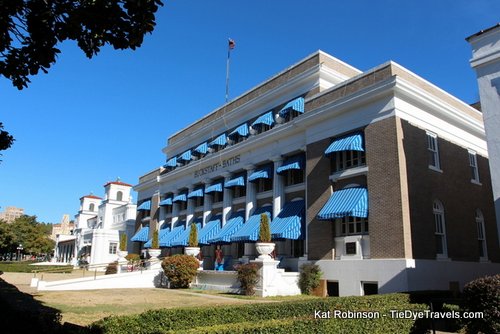 Just north, under bright blue awnings, stands the Buckstaff Bathhouse.  The only bathhouse to continuously operate from the day it opened in 1911, it still offers steam cabinets and baths, massages and other treatments, just as they were offered ages ago.  The Buckstaff may not have updated with modern conveniences, but for the true bath experience it can’t be beat. 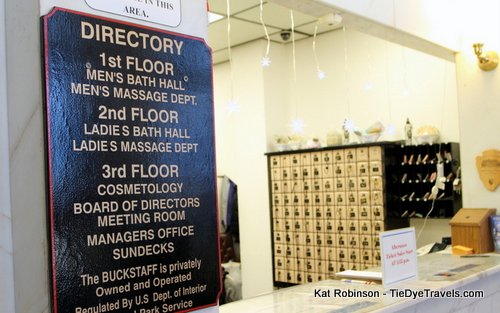 Unless you’re a patron, you won’t get past the small front lobby.  However, when business is light, walk-ins are welcome, and you can enjoy the experience at a moment’s notice.  The Buckstaff is open Monday through Saturday.  Check treatment prices here. 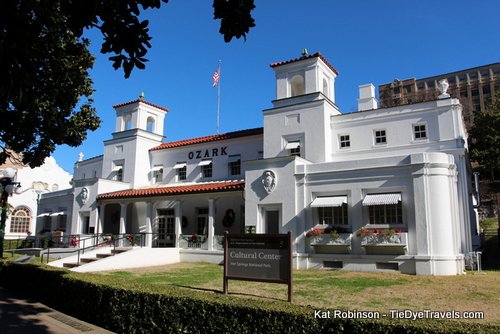 The Ozark Bathhouse is the next on the street.  Originally opened in the 1880s, its second iteration was created in a more Spanish Mission-style and opened in 1922, tying its appearance to the explorer Hernando DeSoto.  Today, the Ozark Bathhouse is used as a cultural center for the park, and it’s open noon to five p.m. Friday through Sunday and for special events. For more information, click here. 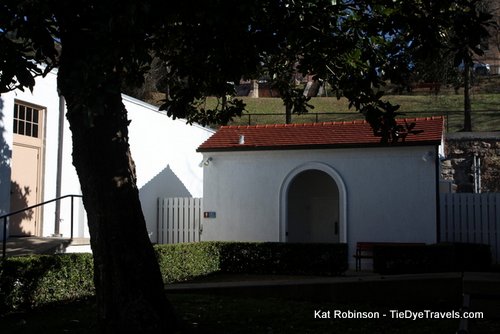 For those needing facilities, restrooms are located on either side of the Quapaw Bathhouse, the next facility along Central Avenue – for men on the south side and for women on the north. 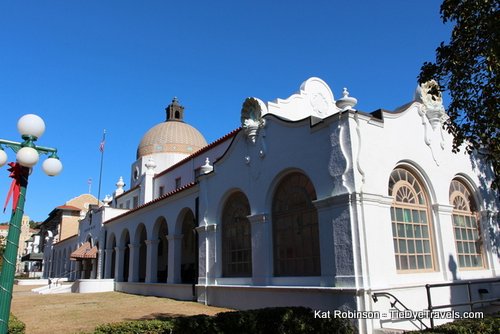 The Quapaw Bathhouse, which stands on the site of the Horseshoe and Magnolia Bathhouses, was opened in 1922.  Named for a Native American tribe that dwelled in the area, the Quapaw is well recognized for its unusual dome. 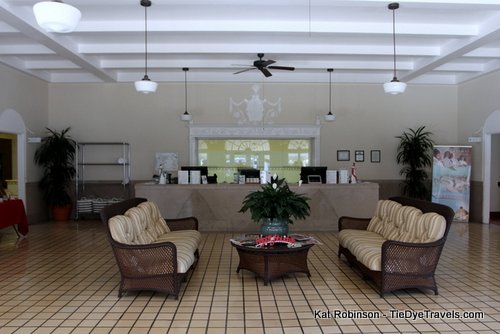 Renovated extensively and reopened in 2007, the Quapaw offers a modern communal bathing experience as well as individualized baths and treatments.  You can learn more about the Quapaw here. Oh, the Quapaw is closed on Tuesdays, 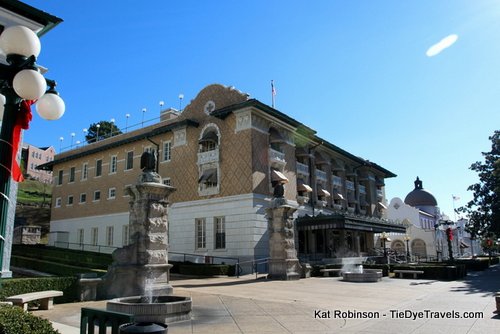 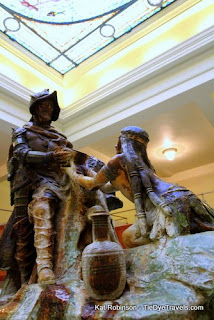 The Fordyce Bathhouse next door serves as the official visitors center for the national park.  Carefully restored, it’s open for travelers to explore, top to bottom.

Here, you can view treatment rooms, parlors, a gymnasium, bathtubs and equipment used over the history of the bathhouse. In the basement you can view the actual Fordyce Spring that supplied the thermal waters for the facility.

The tour is free and there’s a great video offered that delves into the history of Hot Springs National Park. For a photographic tour, head to this story. 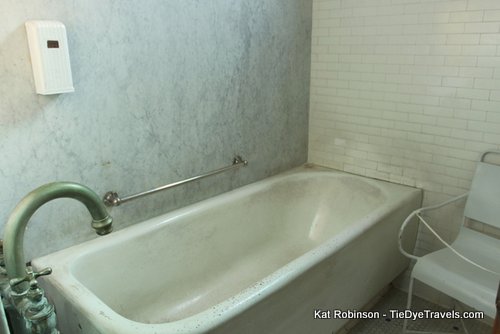 Just north of and behind the Fordyce Bathhouse, you’ll find a short path that will take you to three open springs. 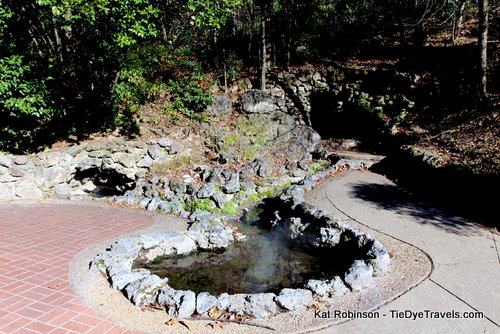 These are a few of the 47 thermal springs within the park.  Most have been capped in the park.  The water constantly bubbles up to the surface at 143 degrees, so if you decide to dip your finger, expect it to be hot! 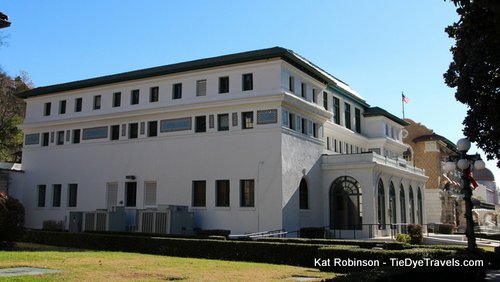 To the north of the Fordyce Bathhouse, you’ll find the Maurice Bathhouse.  It was constructed in 1911, and it had a gigantic thermal pool in its basement.  It closed in November 1974.  It’s recently been renovated by the National Park Service and will soon be available for someone to lease.  There’s another public fountain just north of the Maurice. 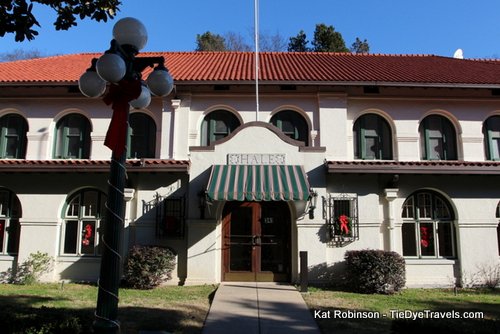 The Hale Bathhouse next door was originally constructed in 1892, and underwent renovations in 1914 and 1939.  It’s the oldest bathhouse currently standing on Bathhouse Row, and it replaced a previous Hale Bathhouse.  This structure closed in October 1978, but it’s been renovated by the NPS.  Currently, Pat and Ellen McCabe are working to secure a lease to open the Hale Bathhouse as a bed and breakfast. 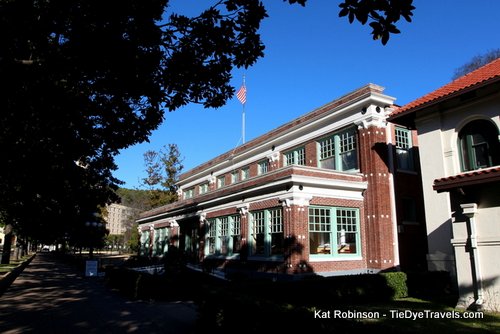 And then there’s Superior Bathhouse.  The smallest of the remaining bathhouses at just 11,000 square feet, it was built on the site of the former Superior Bathhouse, which itself was built where the Big Iron Bathhouse stood.  The current facility opened in 1916.  The building sat empty for most of 30 years after it closed in 1983, but in 2013 it reopened as Superior Brewery and Distillery.  It’s the only place in the world where you can enjoy beer brewed from thermal waters, or brewed in a national park.  It’s a good end point to a bathhouse row tour.  Superior is also a restaurant and gelato shop, and small brewery beers from regional brewers are also available. 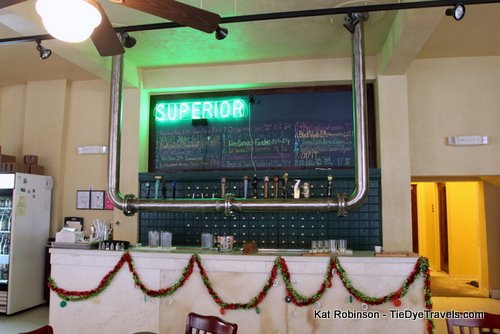 A long lawn separates Superior Bathhouse from Fountain Street and the Arlington Hotel beyond.  On the mountain side, there’s a small plant that lowers the heat from the springs before it’s pumped to the bathhouses – because you wouldn’t want to take a bath in 143 degree water! (A shower at 110 degrees is considered to be pretty hot). And there’s this rock, which doesn’t look like much from a distance, but which denotes a very specific fact.  It marks the state capital of Arkansas on June 2nd, 1862.  That’s right – for a very brief time during the Civil War, this point in Hot Springs was the capital of the state.

More cool places to check out while you're there:
The Arlington Hotel: Take a tour of the largest hotel in Arkansas, with its ample dose of southern charm.
The Ohio Club; Arkansas's oldest bar dates back to 1905, and today it offers one of the best burgers in the region.
The Pancake Shop: Step back in time and enjoy a diner experience straight out of the 1950s.
Rolando's Restaurante: Southern American fare with great variety and color. Dine on the patio!
Angel's on Central Avenue: A spot to grab a great, quick bite of good Italian food.
The Gangster Museum of America: Learn more about the history of famed gangsters who came through Hot Springs.
Garvan Woodland Gardens at Christmas: Always glorious, these gardens take on added dimensions with an annual unbeatable light show.
Galaxy Connection: Like Star Wars? You'll love this museum dedicated to the famous franchise.
Mid America Science Museum: Fun for kids and adults alike, and one of the best science museums in the country.
Told by Kat Robinson at 9:13:00 AM