Home of the Love Burger: Troy's Drive In in DeWitt. 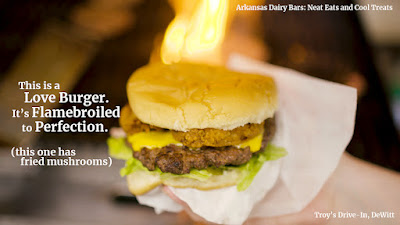 There's nothing like a flame-broiled burger - and when the flames get this high, you know you're getting something special. Let's visit DeWitt's classic dairy bar.

This is an excerpt from the book Arkansas Dairy bars: Neat Eats and Cool Treats. You can watch the Troy's segment of the accompanying film of the same name, here. For signed copies of the book, click here. 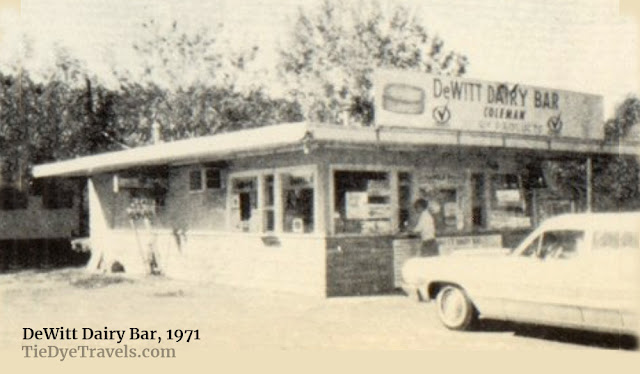 In the heart of the Grand Prairie, in a town called DeWitt, one woman has taken on a family’s established restaurant and made it all her own.

“When my business partner and I bought it, the people that had it before us had it for 37 years straight. They are the ones that named it Troy’s. It comes from the husband, yes.”

Stephanie Williams purchased the longstanding Troy’s Drive-In in DeWitt in 2017. It had originally been built as the DeWitt Dairy Bar before being purchased in 1973 and renamed. 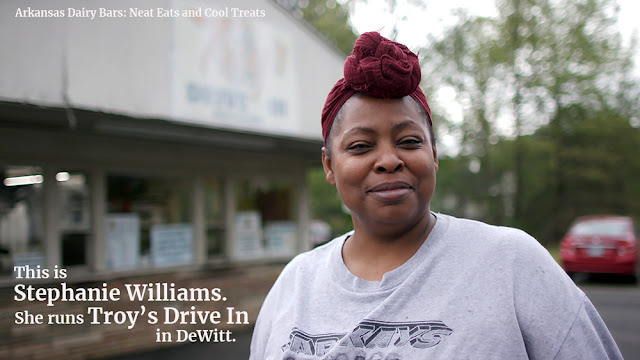 "Every fast food restaurant, which we only have two, I was there to open both of ‘em, Sonic, and then Subway. The guy that was my business partner, he owned the Subway. He brought it to DeWitt. I managed it for him for eight years before we came over here. He owns a flying service - he’s a pilot, crop-dusting pilot, and he just decided one day that he was done. So I was like, ‘hey, I don’t want to sell out. Let me buy you out.’ And that’s kinda how I got it.”

“So why would you want to take on the operation of a dairy bar like this?” I ask.

“Because I love it. I love what I do. Food has always been my life, and then when I got here I could bring some of my own flavor to the menu, so hey, it was great, and I loved it. We just took off and it’s been going ever since. 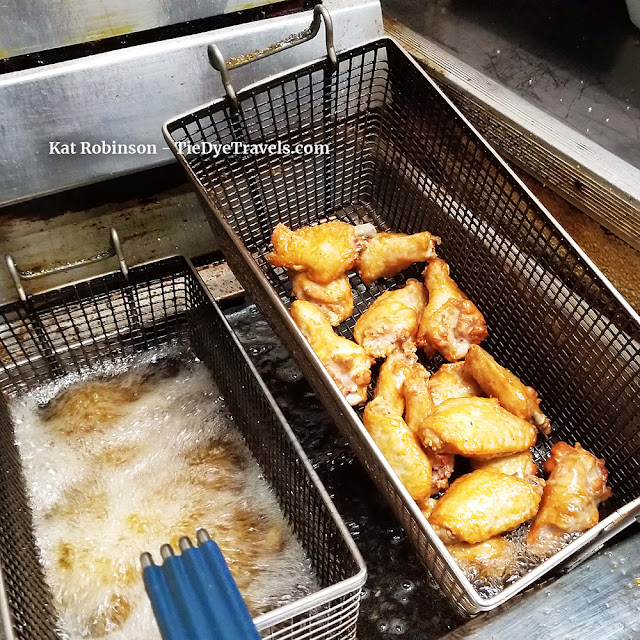 There’s a singular dish that keeps people coming back to Stephanie’s window. 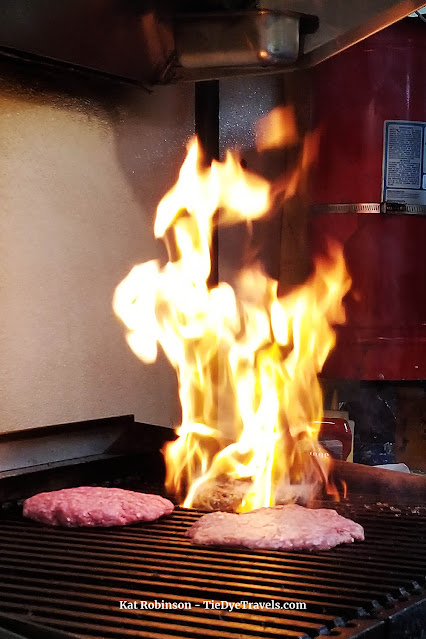 “Oh yes, that’s the grilled burger. It’s the flame-broiled burger. It’s the burger made with love. It’s my Love Burger. Fresh hamburger meat. We do not use anything frozen when it comes to our burger. The grill seasons our burgers. We won’t add any salt, we won’t add any pepper. We weigh ‘em out, eight ounces for a large, four ounces for a regular, and we pat ‘em out with our burger smasher, and, hey, we flame broil ‘em.” 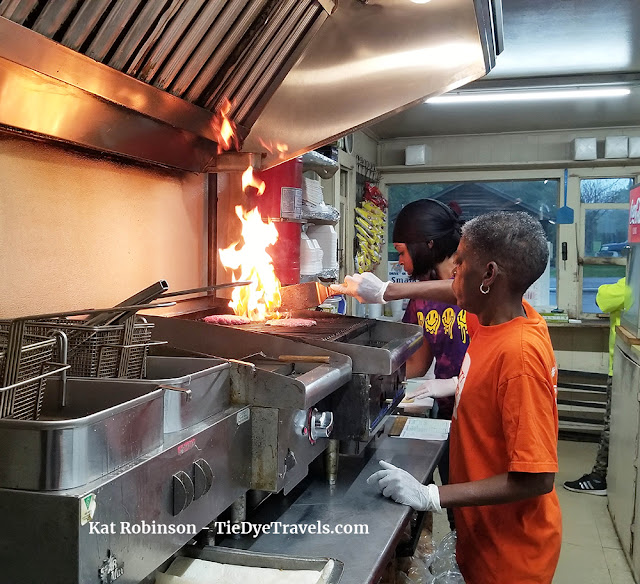 “Sometimes those flames get pretty high!” I exclaim, catching the flourish of flame through the window, a full two, even three feet above the already elevated gas grill at the center of the cooking line.

“Oh, they get high, they get real high!” Stephanie answers. “It gets really hot in there. It’s real hot, here come the flames!  We have people that drive up just to see the flames.” 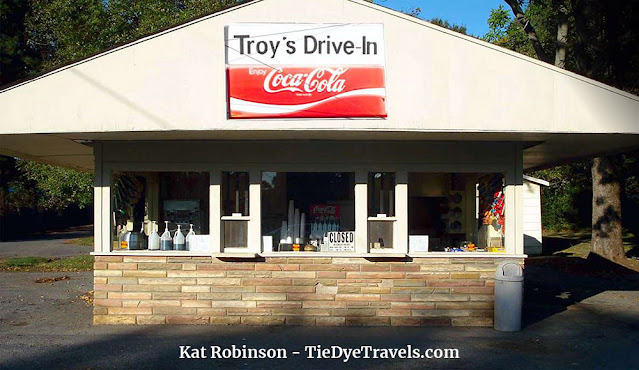 My very first visit to Troy’s in 2013, when I was working on Classic Eateries of the Arkansas Delta, I was sitting in my car with the air conditioning on, a hot July scorcher in full bloom, reading my messages on my phone when that burst of flame caught my eye. There were four people in the shop at the time, the temperature was nigh on 100 degrees outside and I could not imagine how anyone could manage to bear that sort of inferno. 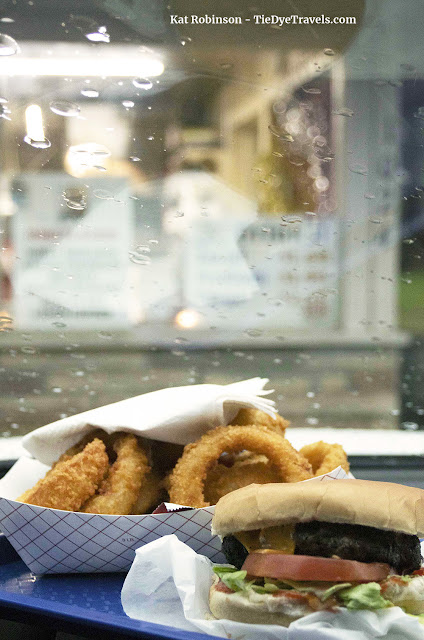 But when I got my burger at the window, and pulled it out sitting in my car, taking that photo, taking that first bite, I understood why it was so good, and why others chose to dine in their cars out front like I was. It was dinner and a show. 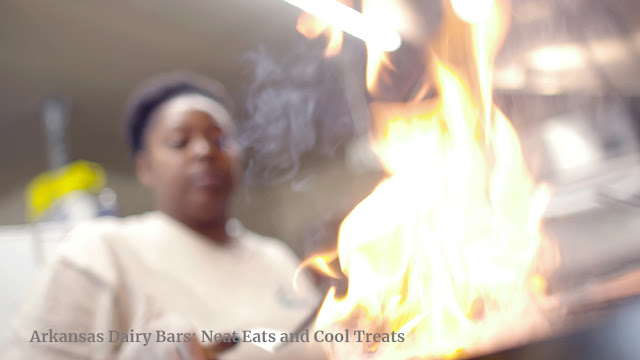 “What people like about it is the flame broil. It’s the way we flip ‘em on this grill, this gas grill,” Stephanie shows me. “We got four burners that run down there, and it’s gas, and we cook ‘em just like if you were to have a charcoal grill outside.”

The population of DeWitt, Arkansas is 3019 - which makes the amount of hamburger Stephanie uses each week truly extraordinary. 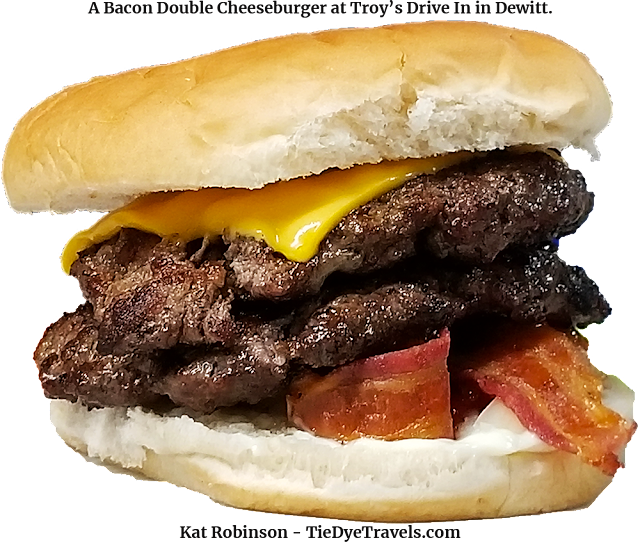 “Yeah, so I get in 240 pounds every delivery, and I get two deliveries, sometimes more, so, you see that?” she says, showing me a patty on its wax paper, “that’s what they like. Burgers are made every morning, 120 burgers every morning before we open up. Whatever we sell at lunch, we replace it, because we’re probably gonna sell another 120 before 7:00. That’s a lot of burgers for a little town, but they get double, triple meat, single meat, double burger with barbecue meat on it and an onion ring. They get a half a pound of barbecue meat put on top of a jumbo, double meat cheeseburger, and one big onion, ‘cause, of course, our onion rings are so big. So you sit the onion ring on top of there, and don’t forget the mayonnaise, pickle, lettuce, and tomato. But, yeah, we’ll top a burger with pretty much anything. If you want fried mushrooms, fried pickles on your burger, jalapeño…”

I will note here, a Love Burger with battered and fried mushrooms is a sin I will confess to enjoying and will pay my penance for. 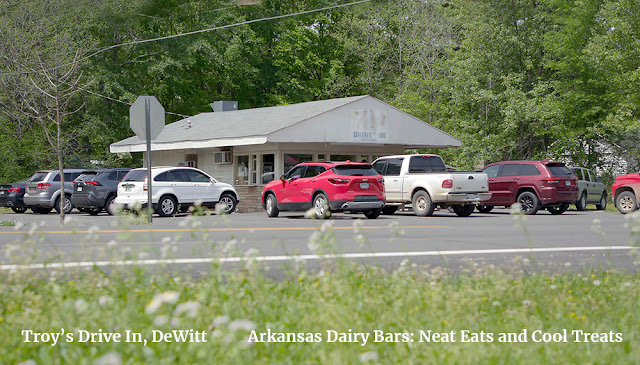 As we talk, cars continue to pull up, a steady stream that hasn’t abated all afternoon. Most pull up to the window for call-ahead orders, but some pull in for window service. I guess our video rig has made people nervous, because there are four cars with folks in them, waiting patiently for us to clear out so they can walk up. I try to be helpful.

“Come on in here!” I holler, waving, while Stephanie grins, then notice the person who had been behind the car out on the road carried on. “Oh, they turned that way.”

Eventually, we’re able to convince folks the walk-up window is open. Every person who walks up, Stephanie knows by name. She asks how they’re doing, how their folks are.

“That’s Steel, that’s one of my favorites,” she notes, pointing to a slender guy coming up to pick up his order. “He’ll want to get out and get in front of the camera,” she tells me. “Steel, he is definitely a regular.”

“I try to, if I can afford it!” he responds, sending Stephanie into another gust of laughter.

“What  do  you  like  about  this  place?” Jeff Dailey, my cinematographer, asks.

“Everything! Best burger in southeast Arkansas!”

“I have people that come here that’s moved away from here and been gone 30 or 40 years, and they come back and tell me they worked here for 25 cents an hour when they were teenagers,” Stephanie relates. “And they cannot believe that it looks the same and that it’s still here and it’s still in operation. They can’t, they just can’t believe it.

“If somebody’s from out of town and they get my number or look us up on Facebook and they want a burger, ‘I’ll be there in 10 minutes.’ It’s, ‘No, this is a Love Burger. You’ve gotta be here in 15,’ because we’re not gonna run it through a conveyor belt. We’re gonna cook your burger. It’s gonna be hot, it’s gonna be juicy, and it’s gonna be fresh. It’s gonna be good for you. 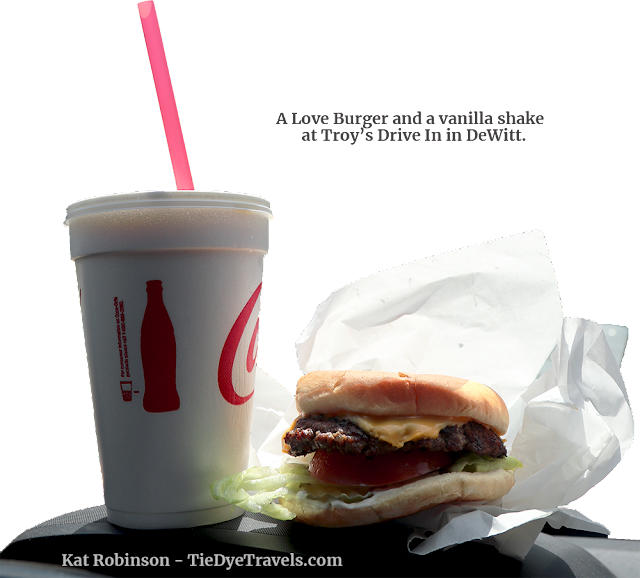 “Yeah, DeWitt loves Troy’s. DeWitt means everything to Troy’s. It means community. It means people coming together all the time, and not forgetting where you came from, and falling in love with something and being able to be in love with it for many years. I’m happy to be a part of that.  I really am. I am.”

Here's a photo of the catfish plate at Troy's, in case you'd like something other than wings or burgers. 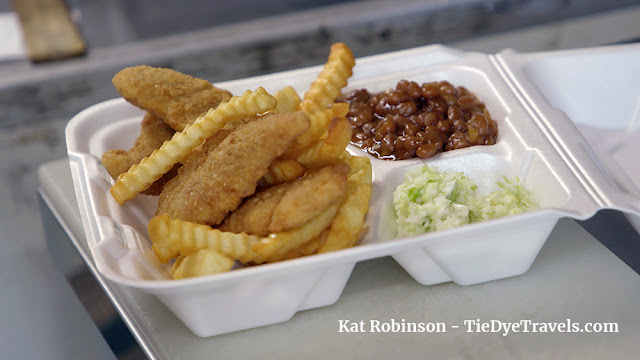