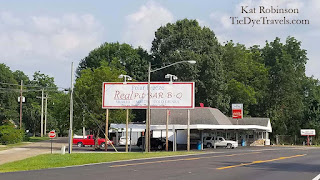 Jack Allison passed in 2019. I'm sharing this bit of history in advance of my new book, Arkansas Dairy Bars: Neat Eats and Cool Treats, which will be released September 28th, 2021. Please check out the accompanying documentary of the same name on Arkansas PBS.

Jack Allison has it made.  Every day he wants to, he goes in to work at a restaurant he founded in 1958.  He gets to sit down with his friends, who come by for coffee or a morning milkshake, and he gets to chew the fat with them.  He smokes hams and makes burgers and when he wants to take off for a day or a week, he can do that. 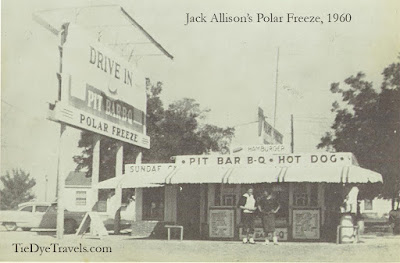 Allison’s place is the Polar Freeze in Walnut Ridge.  56 years ago he started up the drive in along US Highway 67, and through the years his three kids and his wife have helped him out.  The kids ended up going off to college and starting families of their own, and his wife eventually retired from the business three years ago.  But Allison keeps on going.

The Polar Freeze is an institution around town.  The oldest restaurant, it still offers carhop service or a place to sit down and enjoy your meal indoors.  Unlike other drive in restaurants, there’s far more than burgers and fries on the menu.  There’s also barbecued ham. 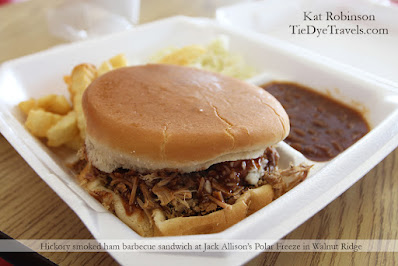 “I barbecue fresh hams,” Allison states, “that’s all I’ve ever barbecued.  Most people barbecue Boston butts or shoulders, maybe because they are cheaper – but they are a little greasier for my experience.  I like fresh hams and I have a batch cooking right now that’s going to come off in a couple, three hours.” 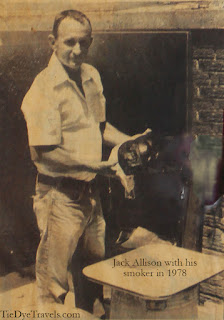 I’d interrupted Allison twice this morning, first when he had been talking with a family and their little girl and again now, when buddies were having their coffee fix.  But he was affable and once I got him talking, he just kept on rolling.

“I bought it on first of July, 1958, and have been here on this corner all these years.  I have a manager that’s been with me about 35 years, an assistant manager 25 years and when I really want to do something I just plan it and go do it! 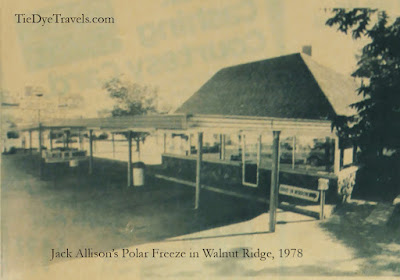 “Walnut Ridge is a little old town.  We have about 4000 population here, and everybody’s been real good to me.  I’ve had pretty good business all these years.  I couldn’t have had a better life.  I just enjoy it mainly because I get to see all my friends.  They’re good friends, but they’re not going to knock on your front door when you’re retired.  They will come by and get coffee or a milk shake and talk.  If I have a day off with nothing to do I’m just bored, so… anyway....” 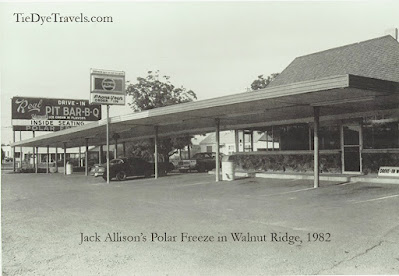 I had to ask him about the crazy day that the town has recently received a lot of notice for.  Back on the 18th of September, 1964, a particular musical group had a stopover in the town – and Jack Allison is the man credited with the discovery.  He laughed when I asked.

“They give me credit for it, but I really don’t deserve the credit.  I was picking up paper and trash off the lot at maybe ten, eleven o’clock at night and I saw this large plane circling.  We have a wonderful airport at Walnut Ridge – I thought it was unusual to see it come through the night.  About that time, three teenagers came running around in a car.  I asked them what they were doing and they said ‘trying to run around’ so I told them to go check on the airport and see what was going on with that plane, and here they went.

“An hour later they came back all excited.  They said it was the Beatles.  Now, I said ‘don’t come back into town starting some sort of rumor like that.’ ‘No, Jack, that’s the Beatles,’ they said.  I didn’t believe it.  Because I was stationed in England for 30 months and I was 20 miles from Liverpool and that’s where the Beatles started.  And it was a coincidence, it really was the Beatles – so that’s the story there."

Turns out, The Beatles were indeed at the airport, changing planes from Dallas, where they'd just finished a concert at Memorial Stadium, and a ranch owned by Reed Pigman in Alton, Missouri. Pigman was the owner of American Flyer Airlines; The Beatles had chartered one of his aircraft during their tour. Their Friday night plane change that Mr. Jack saw, drew the attention. 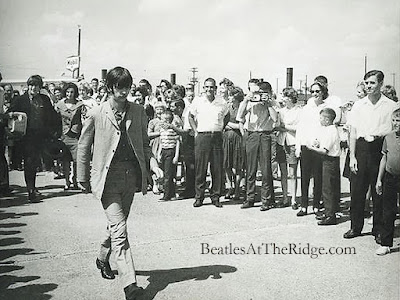 By Sunday morning, enough rumors and leads had been nailed down that a crown of 200-300 folks, mostly teenagers, skipped church and waited at the Walnut Ridge airport. Word is, George Harrison and Paul McCartney arrived on a flight before the masses arrived, and watched from an old pickup truck. 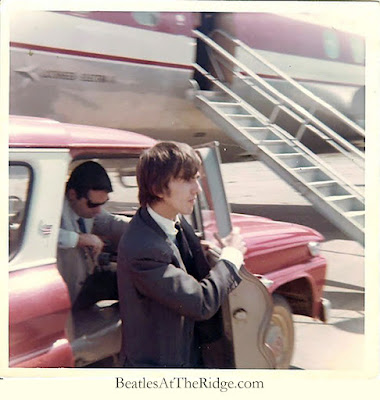 When a plane carrying John Lennon and Ringo Starr taxied in, the pair walked a gauntlet between the polite but loud fans and boarded their flight for their last concert in the United States. McCartney and Harrison joined them, ending the brief and only times The Beatles set foot in Arkansas.

"What I did, I did completely just to give those kids something to do, ” Mr. Jack told me, laughing.

At the time of this writing, Allison was 80 years old.  Before we ended our conversation, I told him to have a good day.  “At 80 years old, every day’s a good day,” he chuckled.