Strawberries in Arkansas - Ponderings and 11 Recipes for Strawberry Pie. 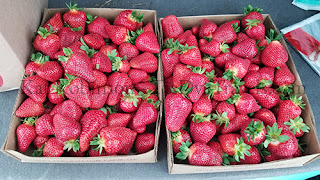 The first fulfilled promise of an Arkansas spring is the bright, tart bite of strawberries. Even when frost complicates our willy-nilly vernal awakening season, the promise of the sweet, sumptuous berries brings even the most deeply hibernated food lover out from under coats and blankets to rejoice in the beginnings of a beautiful, bountiful Natural State harvest.

Our roots with the berries run deep.  While strawberries can be grown these days in every U.S. state in some manner or another, Arkansas's four season status meant the berries could be planted in March for a late April through June harvest without extraordinary effort.

They're documented back to the 19th century, where they were a popular garden crop in most Arkansas counties. The coming of the railroad meant new markets beyond the wagon radius of any farm for distributing them while they were still fresh.

Strawberry cultivation by the end of the 19th century was all over Arkansas, with masses produced each year in White, Searcy and Lonoke Counties becoming well-known. Fayetteville, McRae, Judsonia, Bald Knob, Marshall... all had a claim on the famed berries early on. 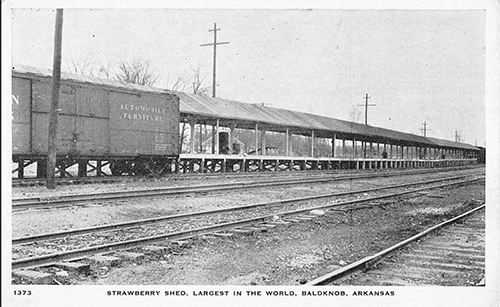 The short farm-to-fork lines and lack of proper refrigeration meant berries were quickly served when fresh. For those berries past the point of immediate consumption, home cooks put them on heat, added sugar and either pectin or lemon juice, and made jam - not a far cry from cooks of Renaissance Europe, who preserved them in a sugar syrup.

Jams kept the flavor of strawberries year-round for adding to biscuits, cakes and pies and tarts or even just to lump onto a slice of bread.

Once refrigeration became available, freezing strawberries became another beloved method. You can indeed individually freeze strawberries on cookie sheets and then shake them into a ziptop bag for later use, but the berries lose their perfect crunch of freshness.

Perhaps this is why, after the 1966 introduction by Birds Eye Foods of Cool Whip topping, a pairing of both use and flavor was made. Strawberries, long since known to be absolutely delectable served with or even in cream, were the defacto go-to fruit to be topped with Cool Whip. And, once the confection was gone, the plastic tubs became a popular way to store quickly preserved strawberries in the refrigerator - with no cooking required. Home cooks would use just the fresh strawberries and a cup of confectioner's sugar to make the substance - removing the caps from the berries and then slicing them, dropping the slices by layers in the tubs and lightly dusting with the sugar before layering more in. The resultant concoction was fresh berry slices in a syrup made from the sugar pulling out moisture to become the drippy topping we have long found delectable on sweet biscuits or shortcakes.
Indeed, the simple preservation has given way to four generations of Arkansawyers enjoying their berries in this fashion, even spread further to yellow cakes or biscuits with cream.
The love of strawberries has permeated our Arkansas food culture. Several of our most beloved restaurants celebrate the seasonality of our locally produced produce with strawberry shortcakes of various renown. From the crispy cookie-like shortbreads under fresh strawberries and cream at the Bulldog Restaurant in Bald Knob to the spongy accompaniment of shortbread at Little Rock's famed Trio's with its delectable saucy berry presentation, to the more biscuity version at Brave New Restaurant in Little Rock and One Eleven at Crystal Bridges in Bentonville, the short run of berries offers a wake-up for taste buds tired of winter's starchy and meaty standards.
Whence not in season, those jars of put-back strawberry jams enhance biscuits and scones and all sorts of bready delights, sometimes stirred into a quick sweet bread or spread between layers of fresh, hot cake with cold whipped cream. My partner, Grav, is a wizard at this, sometimes adding in Arkansas peaches or blackberries to the pot bubbling happily away on the stove when he's in the middle of canning season.
Of course, fresh and preserved strawberries both have a delectable place in Arkansas's multitude of pies. As I've researched my upcoming cookbooks featuring Arkansas church and community cookbook recipes, I've found a delightful selection of different pies to share featuring our spring harvest. Here are a few you might enjoy. Click to enlargen. 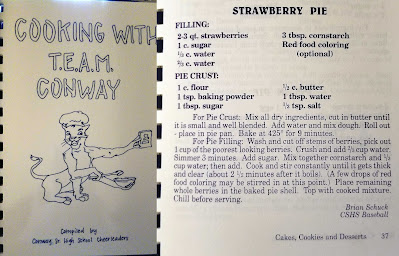 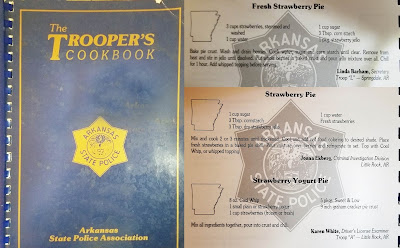