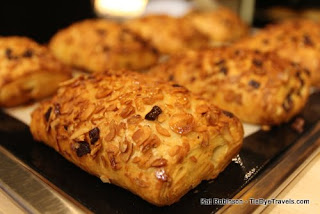 You're not going to believe where I found this. Not for a moment. But you'll be glad it's here in Arkansas. 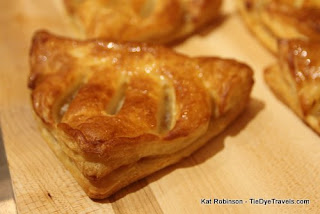 The bakery is Fornetti's, and it's straight out of Europe, where the company moves more than $100 million in baked goods each year from its more than 8000 locations. 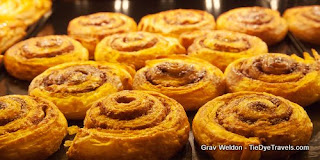 So what is it doing in Arkansas? And where can you find it?

Grav and I attended a preview party this week in the back rooms of Diamond Bear's North Little Rock facility. There, we were treated to samples of different sandwiches on a variety of fresh breads served alongside Diamond Bear Brews (and my own choice, Big Rock Root Beer) while mingling with different people in Arkansas media.

Then we were given the news.

So, you know the Coulson family, right? Arkansas folks who run a lot of enterprise around here? They're teaming up with Fornetti to being European breads and pasties to Arkansas... inside its flagship Road Runner stores. 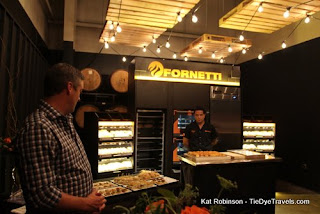 I talked with Nick Peters, the CEO of Delmano Fornetti USA. We chatted a lot about the recent interest in freshness and farm-to-table that's made its way across America and Arkansas in the past decade. This sort of thing is already standard overseas, it seems. In Europe, they've already 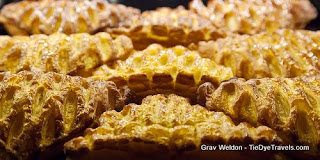 gone through what we've gone through with big box retailers such as Walmart and Sam's Club, Costco, Whole Foods and the like. It's awesome to be able to pick up all sorts of things you need at one time, but when you are in 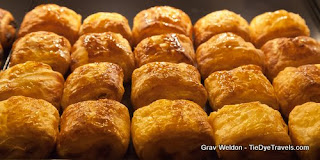 a rush it's not practical.

Peters told me the fastest growing retail market in the US eight now is the convenience store. We're used to them for gas and pre-packaged snacks, but Peters says those demands have already changed in Europe, thanks to consumer demand. Folks there want fresh, hot and convenient. 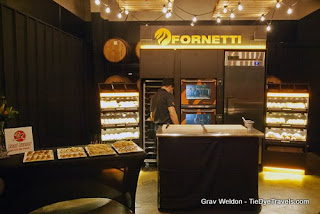 That's where Fornetti comes in. This cool kiosk will be where your nose leads you when you walk in the door at any of the Road Runner locations where one is placed. Those ovens have been designed around the pastries they'll bake. The ones you see on the side here will be close to 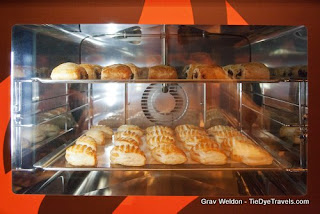 registers, so you can pick up a pastry, pay and quickly be on your way.

But at a convenience store? Well, sure. Perfect place, actually.

But how do these pastries taste? We had opportunity to try several applications, including a chicken pesto 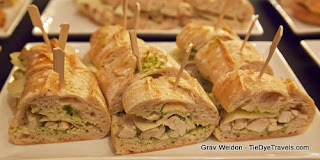 on baguette that interested me for its pliant yet substantial bread, a crusty but soft loaf. I took a baguette home to explore further. This is the sort of bread I would be likely to pick up with a hunk of cheese or dark chocolate for a snack. 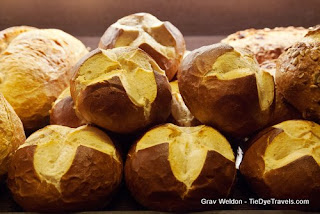 Grav delighted in pretzel buns and started making recommendations foe burgers that could be created on these loaves, because that's what Grav does. He rather enjoys pretzel buns and rolls when they are done well, and he was especially pleased with these. 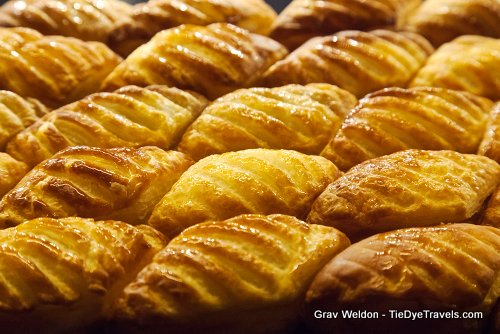 But it was the dessert pastries that really shone. There are these tiny apricot pastries that have a thick apricot jelly within the sweet, crispy hatched crust - they look sort of similar to a product you can find in local grocery stores, but since they're baked fresh they have an entirely different texture to them and they are light and delightful.

I loved the little chocolate rolls with their dark chocolate and croissant-like dough - but from reading this you already know how I love a good chocolate croissant.

There were these gooey-centered apple turnovers (called Triangles here) that were fall-apart fantastic. Peters told me so far this is the choice of the Arkansas consumer. 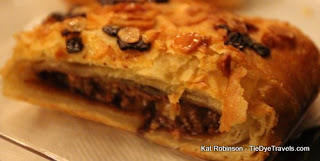 However, our friends over in Oklahoma (where some Road Runners are also getting Fornetti European Bakeries) seem to prefer the chocolate hazelnut varieties.

I can completely understand why. I mean, the Italian-influence of pairing chocolate and hazelnut together is popular, and here it shines. I especially love the almost molten center with its "sparkle" of hazelnut bits. Wow.

It'll be interesting to see how Arkansas picks up on this new development. We have long thought of our gas stations and convenience stores as places to pick up a hunk of wrapped cheese or a fried pie by the register, but until now the idea of obtaining fresh and hot baked goods has been foreign. I'm interested to see where this goes. 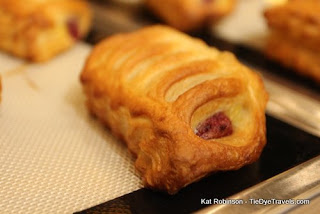 You can find the new Fornetti European Bakery kiosks within Road Runner’s stores at 545 Skyline Drive in Conway; 6320 Rogers Highway in Fort Smith; 1500 Bypass Road in Heber Springs; 3039 Albert Pike Road in Hot Springs; and 800 South Broadway Street, 11401 Cantrell Road and 13400 I-30 in Little Rock. All locations offer a variety of premium bakery products including chocolate and fruit-filled pastries; donuts; artisan breads; and baguettes. Peters said pizzas could also be on the way, so watch for that, too.

If you'd like more information about Fornetti and its pastries and baked goods, check out the website here,
To purchase this article, email Kat Robinson at 10/27/2016 10:44:00 AM