The Main Cheese - You Had Me At Muenster. 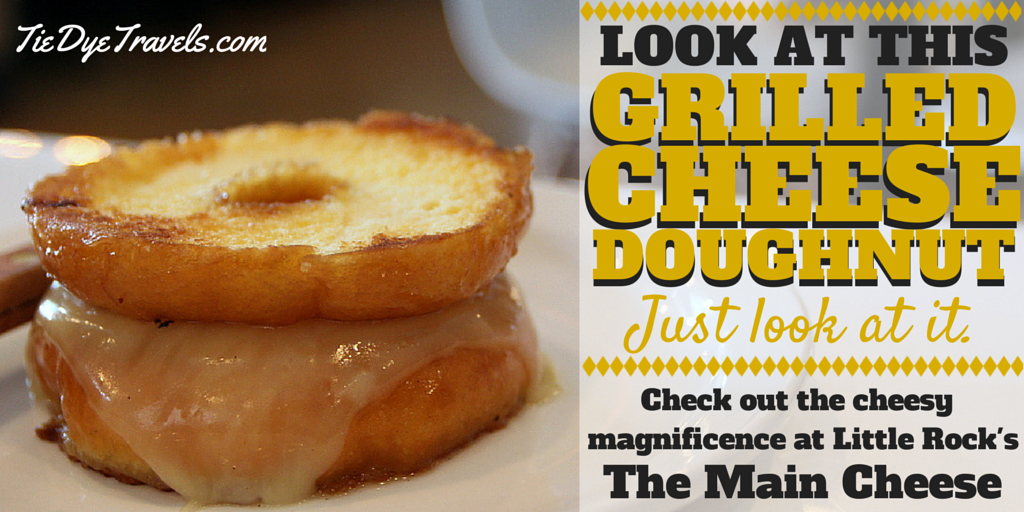 For about six months, every time I'd decide to go out and try The Main Cheese, there'd be a line out the door.  There would be individuals standing, waiting to get into the new restaurant that slid in where Gina's Chinese Kitchen used to be (I miss Gina's), and my dining companion du jour and I would look at each other, shrug and go somewhere else.  That's no joke.

But I knew the day would come when there would be no line and I could finally dine at a restaurant that features my favorite food group.  Cheese, of course. 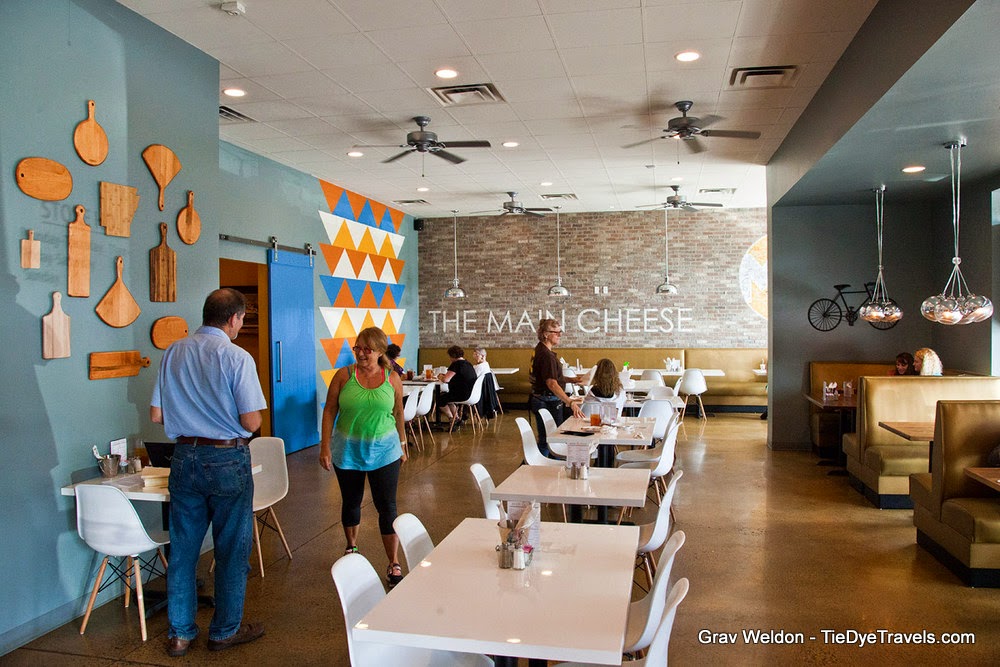 We dropped by after a lunch rush and were thrilled to find no line and quick seat.  We also found big looks, thanks to our big cameras.  Well, that's about normal.  Grav asked if the restaurant were part of a chain, and I shook my head.  The menu made that obvious, with names like The Pig Trail, The Pinnacle and Float'n The Buffalo. 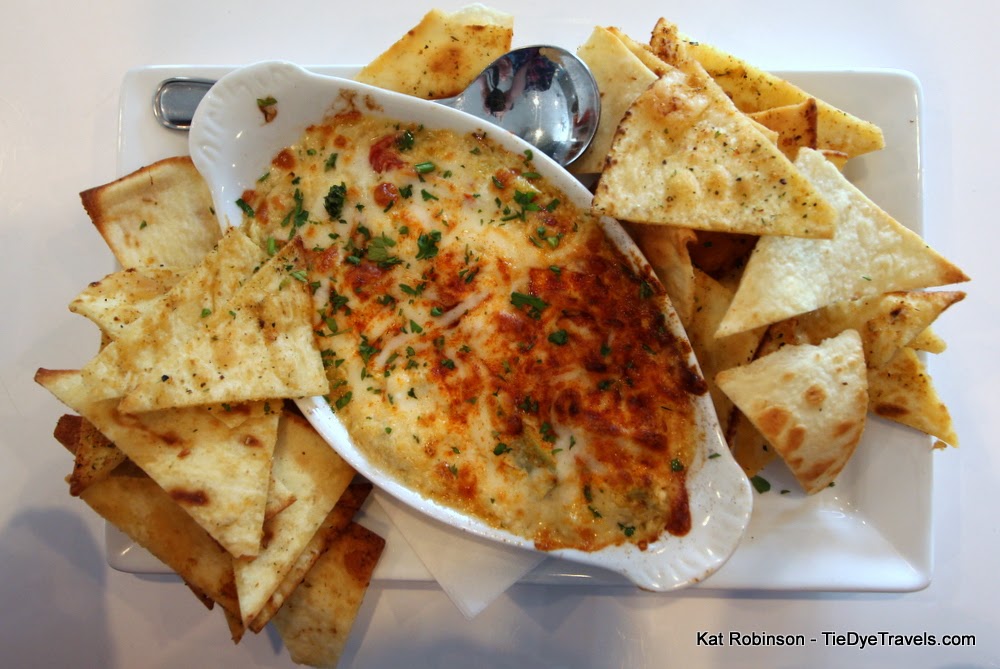 We started with the Artichoke and Cheese Dip... which combines one of his favorite foods with one of mine.  Indeed, the idea of a good artichoke dip was key here... and when you get a good one, you can't imagine improving it.  Now, let me tell you what... this version knocked the socks off everything I'd ever had called artichoke dip.  Great deep notes of cheeses throughout, some tart bits of sundried tomatoes, creamy as all get-out.  Magnificent.  Served with pita chips, which just earns bonus points with me.  I could have licked the bowl. 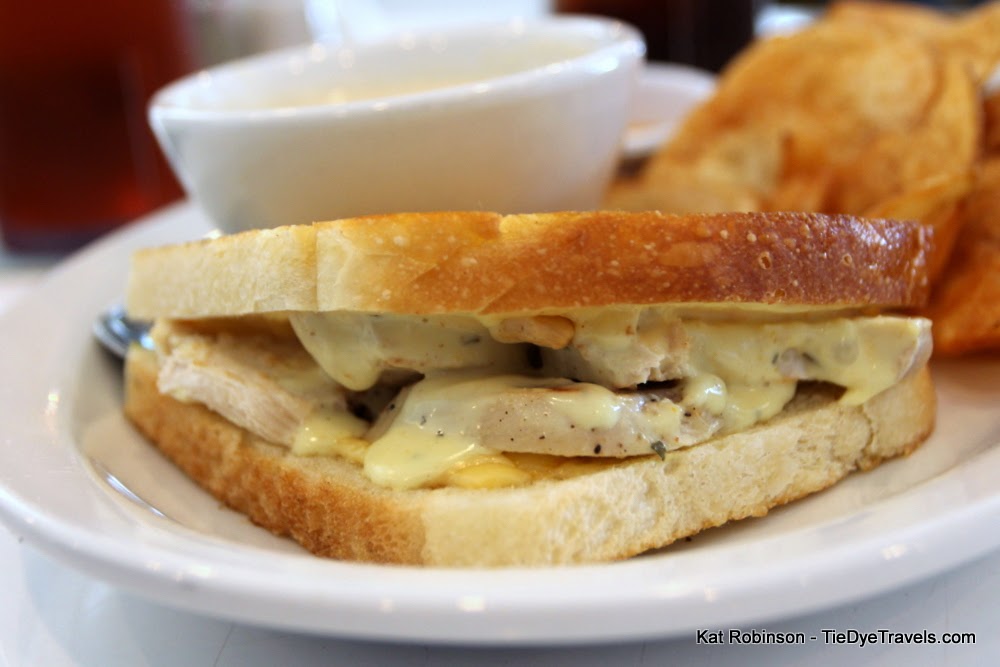 So, lunch itself.  I decided to do the lunch special -- which is your choice of two of the sandwich, salad and soup offerings on the menu.  For me, the idea of cashews and lemon with my cheese sounded intriguing, so I went with The Pinnacle -- chicken and Swiss, Muenster and Cheddar cheeses with cashews and lemon curry sauce on sourdough bread.  I had another reason, too.  See, Muenster was the first cheese I ever fell in love with.  My mom would let me choose one thing on our visits to the grocery store when I was young, and instead of candy or soda, I'd choose a small package of sliced Muenster cheese from the deli.  That was the best treat in the world.
I wasn't disappointed, though if I'd wanted just Muenster I could have just gone for the Big Cheese like Grav did.  The folks at The Main Cheese know what they're doing, because the lemon curry sauce didn't taste strange at all next to that bold and toned cheese background for the chicken.  If I were to knock the sandwich at all, it's that I had to resort to using a fork because the dang chicken kept slipping out, but you know, if that's the worst problem I had... well, that's definitely a first world problem. 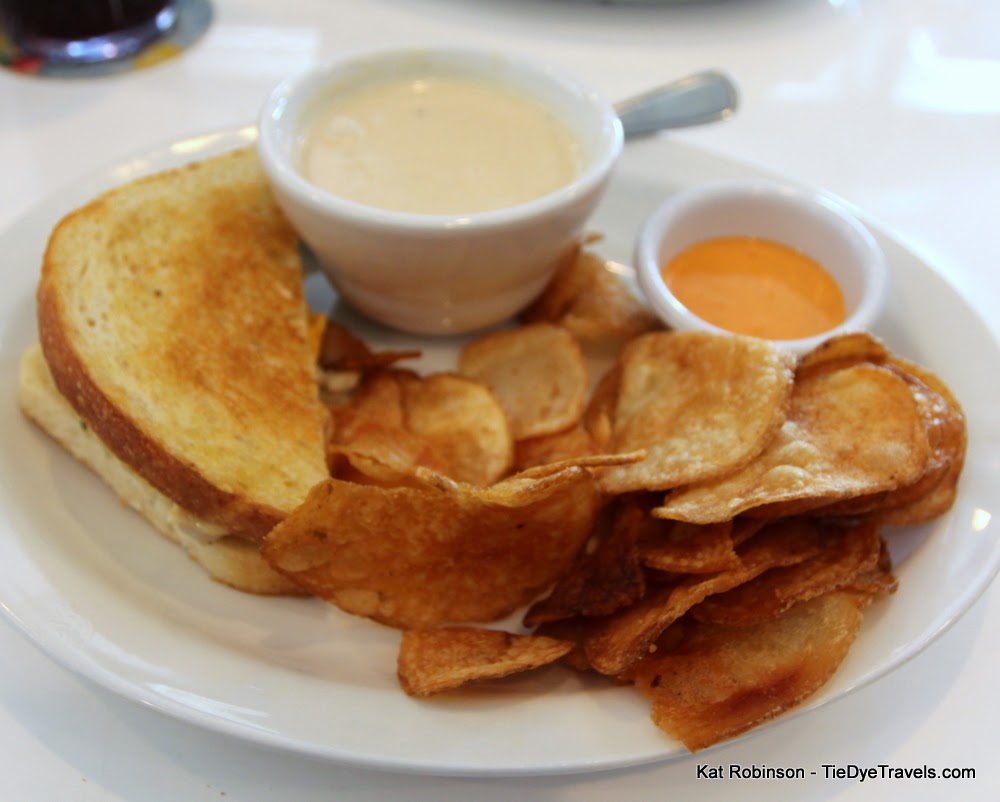 Now, my soup choice was clear... though tomato dill and creamy potato are the usual soups, the daily soup in this case was a crab and brie bisque that I not only agreed to before our waitress could get out her words, but that I all but inhaled.  I'd take that stuff home and drink it for breakfast if I could.  Aw man, there's nothing like a good bisque, especially when it plays so many notes of tart and savory and light and piquant all at once. 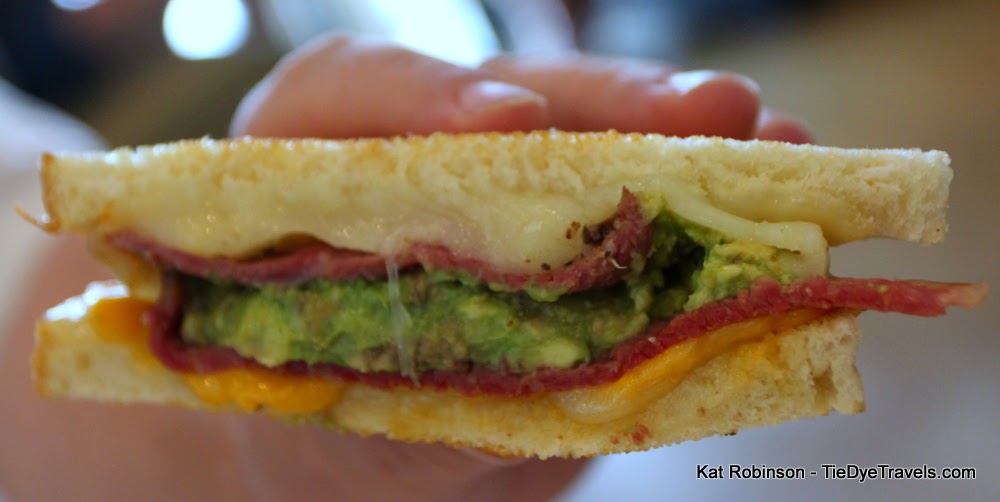 Grav's a weirdo... well, maybe not in this case but it had to be stated.  But he chose to go with the Build Your Own Main Cheese, which is really just a formula for making the sandwich you want to make.  He got his with 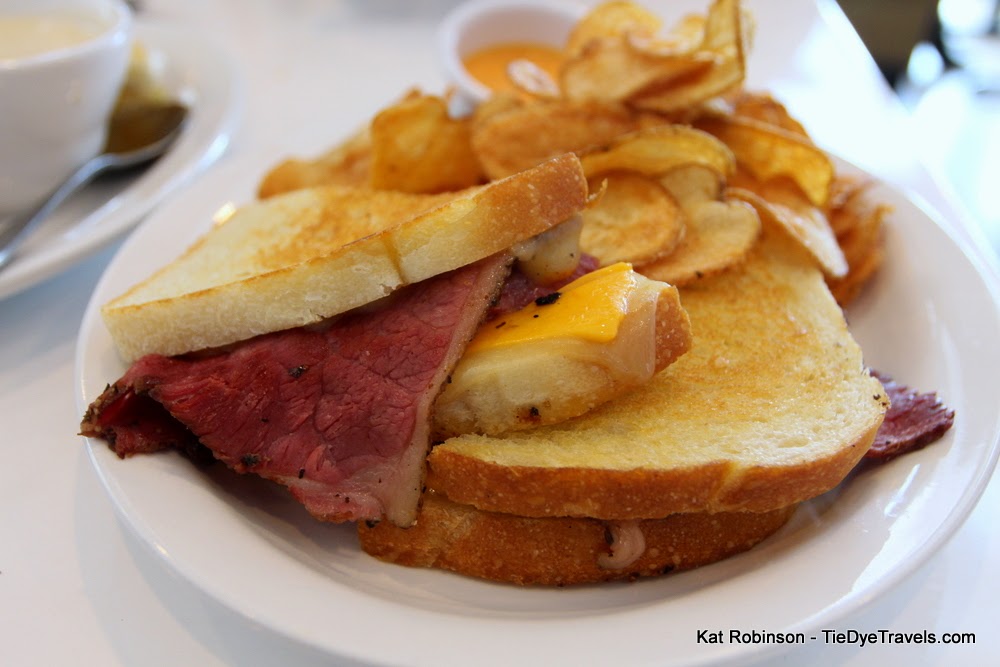 smoked pastrami and avocado in addition to the signature Muenster-fontina-aged cheddar competition, and... well, look at it.  Look at ALL that dadgum avocado.  He got his money's worth on the avocado, no doubt.  Mind you, adding stuff on costs, but that's all right -- $1.99 for the pastrami and 69 cents for the avocado was not a bad deal.  And it was good. 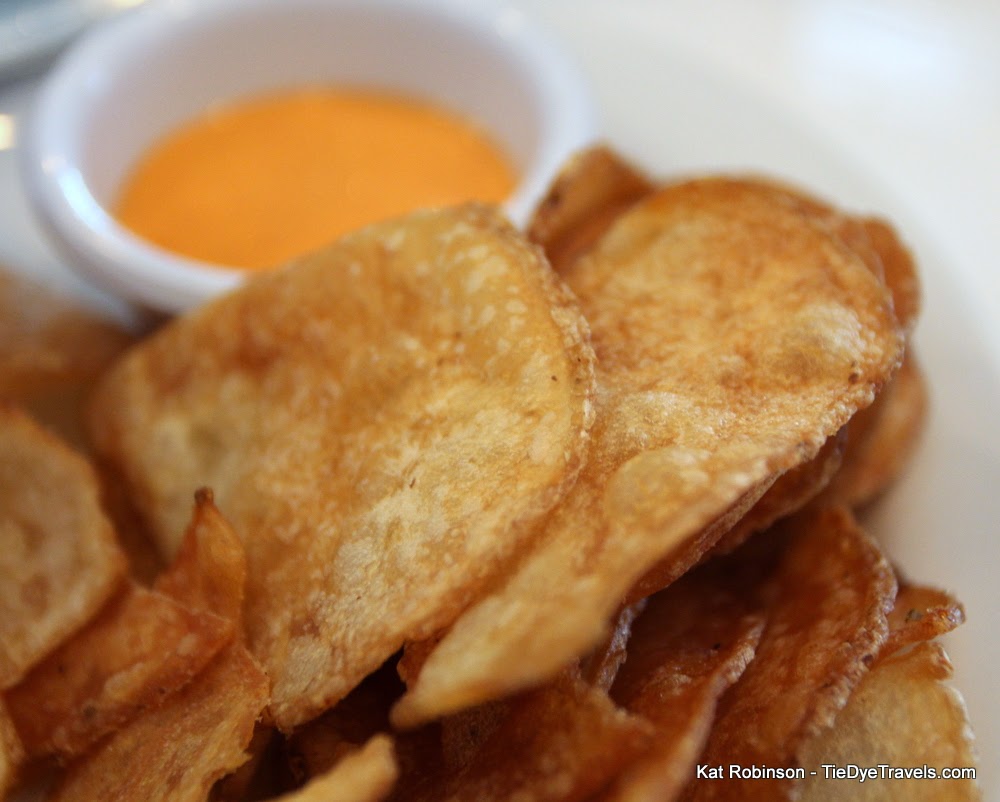 But the really stupendous thing was that he substituted chips for slaw and got these crispy, addictive fresh fried potato chips and little ramekins of the Knock-Your-Socks-Off sauce, which we pecked up like a duck with a loaf of sliced bread, begging more sauce and ending up with said sauce all over our fingers in traffic on the way home.
Yes, we took some home.  And here's why. 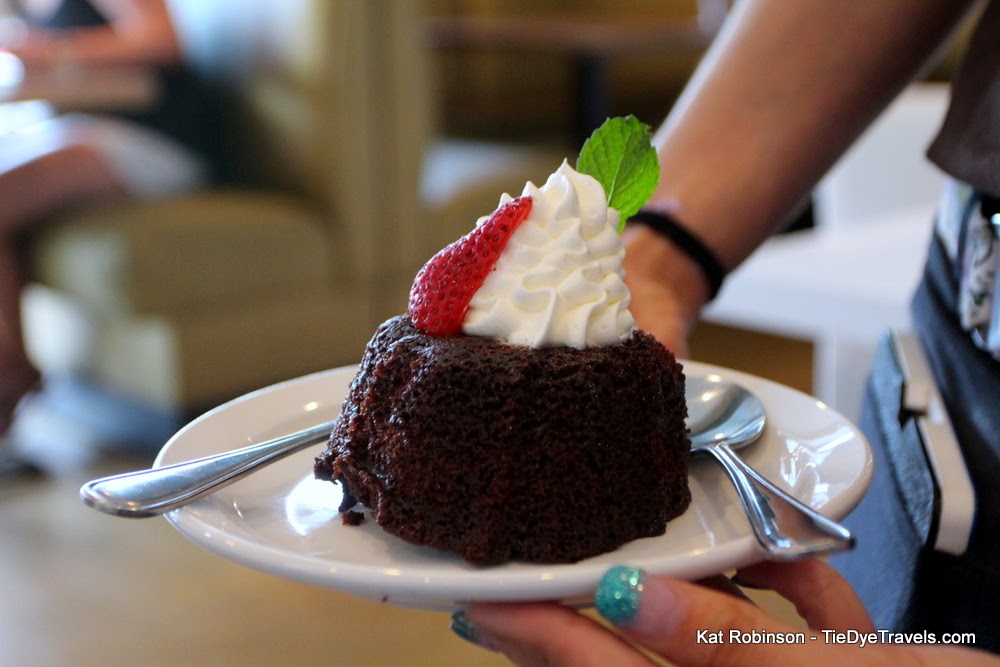 Before we ever made it to the restaurant, I knew what I wanted for dessert and I knew I'd have to take something home rather than eating a full meal first.  And it wasn't this amazingly fragrant hot chocolate lava cake that our waitress tantalizingly brought by our table in some crazy last-ditch effort to get us to order even more dessert, though yes, that looks really good and maybe I'll go have that too someday. 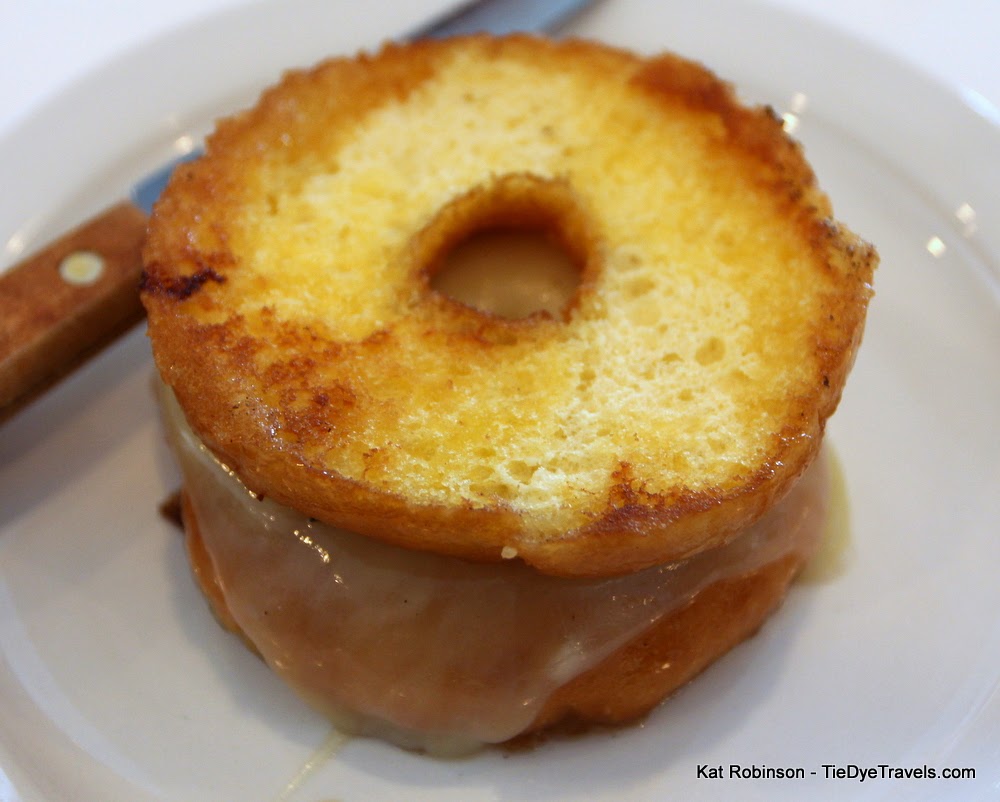 No, it was this.  This, my friends, happens to be a glazed doughnut, sliced and inverted, grilled with fontina cheese on top.  And for me, this was it.  This. Was. It.  Slightly salty, somewhat sweet, a little crispy from being grilled and just... this was it.  No one else is doing this around here right now.  That's good, because they'd probably not get it as right as this.
So yeah, I need to get back over to The Main Cheese some afternoon between the lunch and dinner rushes and try some more stuff -- like the Gulf Shores, which just sounds marvelous with that open-faced broiled crab and shrimp under the cheese.  For now, go drool over that grilled cheese doughnut until you can't stand it, then get to The Main Cheese and eat it.  Oh, and they carry Loblolly Ice Cream, which means you have something to go with it that's equally as awesome.
The Main Cheese
14524 Cantrell Road
Little Rock, AR 72223
(501) 367-8082
Website 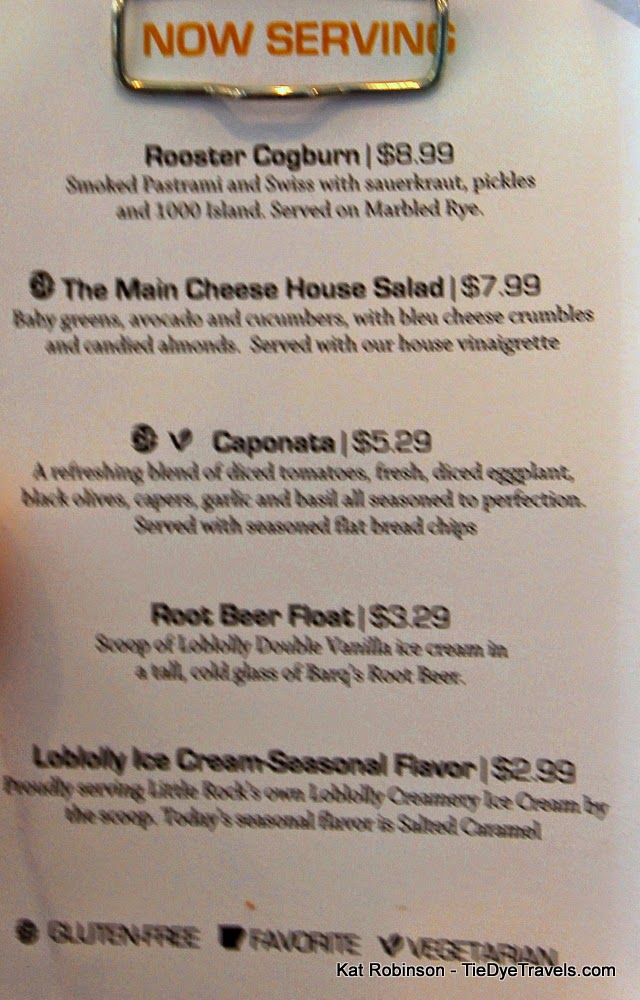 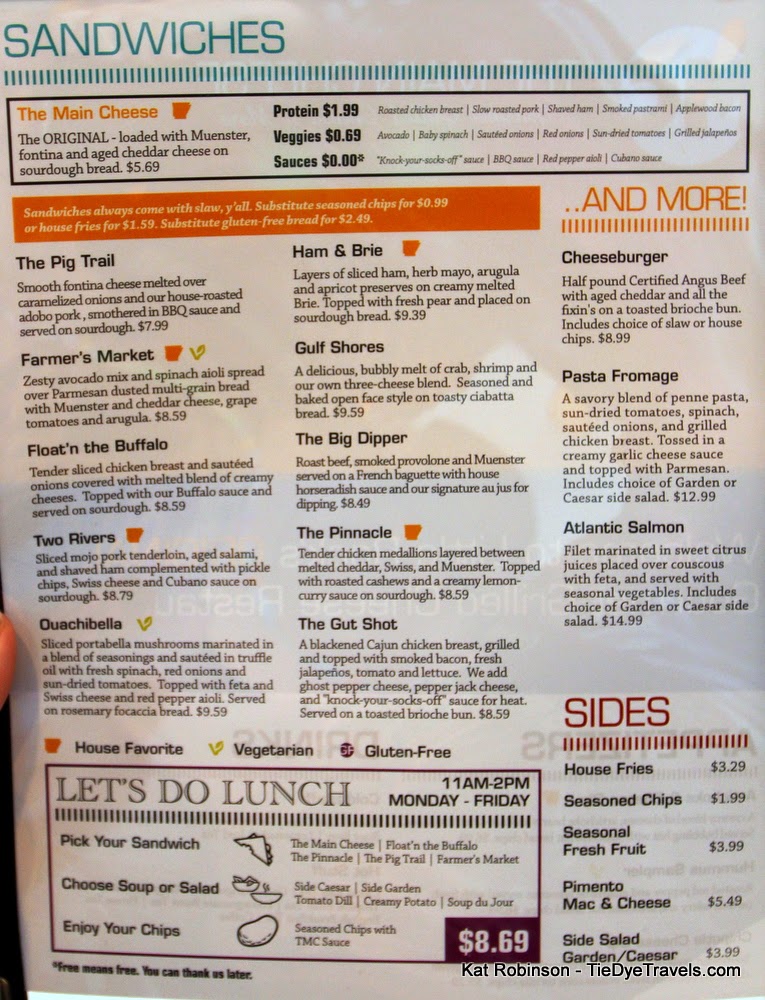 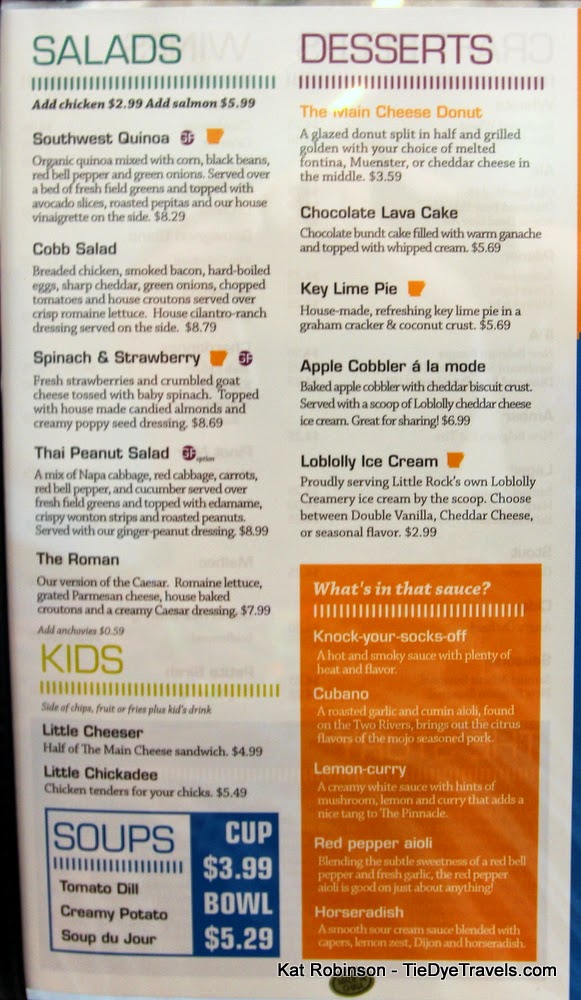 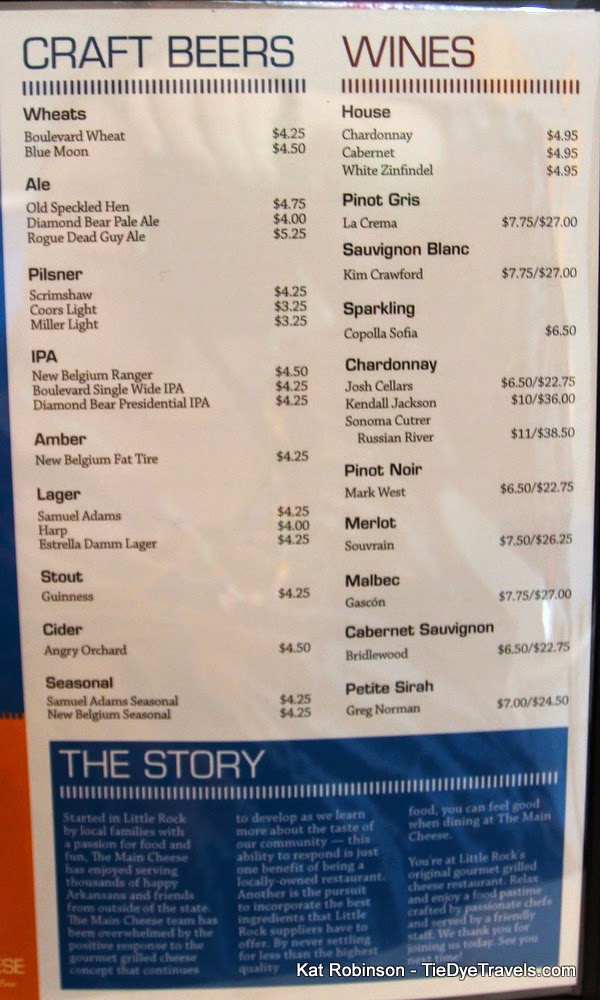