Arkansas Show Caves Are A Natural Choice For Cooling Off In Summer. 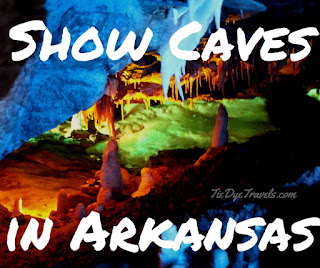 Eight Arkansas attractions offer tours of subterranean caves for visitors of all ages. See why show caves in The Natural State are a great place to escape the summertime heat.

When the weather turns hot each summer, some travelers look for escapes from the heat and humidity. One way to survive sweltering temperatures is to seek shade in an Arkansas show cave.

Eight properties around the state offer a chance to see the underside of the surface. These show caves are open for tours for individuals or groups, and because they’re subterranean, they’re cooler than what you’ll find outside in the sun.

A recent news release from the U.S. Forest Service has caused concern for some travelers. The report on white-nose syndrome in bats included an extension of a closure order for all caves and mines on Forest Service lands until 2019. However, the closures don’t have any bearing on Arkansas’s show caves, which are not located in Forest Service areas.

“While the Forest Service has found sources in the state, they haven’t been found here. We have 100,000 bats in our cave and they’re all doing well. All show caves are open, across the state and across the country, and we are good stewards of our caves and our bats.” says Dennis Boyer of War Eagle Caverns.

“A cave like ours, we’re great family entertainment, a chance to get outdoors instead of being cooped up indoors or playing video games. It’s nice and cool in the summertime,” Boyer adds, referring to the cave’s constant 58 degree temperature.

“Every year, thousands of visitors come through, and not just for the cave. We’re on Beaver Lake and there are nature trails, scenic overlooks, a maze, picnic areas and all sorts of stuff that makes for good family fun and a lot of good memories.” 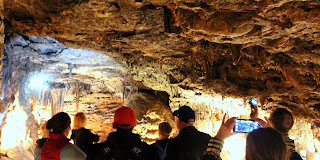 Mystic Caverns was first discovered as a sinkhole in 1830, and in its early days was used by moonshiners as a discreet place to distill liquor. In the 1960s, it was a popular concert venue, and for many years it was operated in conjunction with Dogpatch USA. Crystal Dome was discovered by mistake in 1967 when the property was being cleared of rocks. Unlike Mystic Caverns, Crystal Dome’s interior includes a lot of white outgrowths and formations.

Angel emphasizes how cool the caves are. Asked what makes them a great summertime destination, she answers “the air conditioning! It’s 59 degrees year-round, and the warmer it is outside, the cooler it feels.”

If you go, consider taking a light jacket; the temperature difference between summer’s heat and cave cool can be considerable. For more information, check out http://www.arkansas.com/places-to-go/caves-caverns.