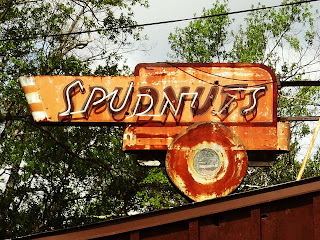 South Arkansas boasts two bakeries with a similar product – a singular item that ties them to a 70+ year shared history with more than 600 other locations.

Spudnuts were the creation of Al and Bob Pelton, two Salt Lake City boys who first encountered potato-flour doughnuts in Germany. They came back to the States in the late 30s and attempted to recreate the addictive rounds themselves – and succeeded with a recipe they started utilizing in 1940 – which became the heart of their Spudnut Shop franchise. Six years later they had 200 stores that utilized their dry spudnut flour in the making of golden rounds. 20 years after that they were stretched coast to coast with more than 600 outlets.

Spudnut was a big deal… but big deals lead to the end of that franchise. It started with the Peltons selling their company in 1968 to National Oven Products, owned by Pace Industries. Pace turned around a few years later and sold off National Oven Products to Dakota Bake-N-Serv… which itself went away after some bad business by its owner. The company and its company and Spudnuts the franchise all evaporated with a conviction of fraud and conspiracy in 1979. Franchisees were left holding the bag and most disappeared within 10 years.

But not all of them. Two of the franchises held ground here in Arkansas – one in Magnolia, opened in 1959 – and the other in El Dorado, opened in 1948. The two stores have differently styled buildings and different vibes… but they both still sell the golden rings six mornings a week.

Daisy Stringfellow started the one in El Dorado. She discovered them on a trip to visit relatives in Oregon, and visited one of the original Salt Lake City Spudnut Shops on her way home. By the time she arrived back in LA (Lower Arkansas), she had decided she wanted to own one of those franchises. Her daughter Nancy Varnell and son-in-law William Varnell are co-owners today – and Bud McCann is still the only manager the store has ever had.

The El Dorado store is more art deco, more stylized on the outside with a tiny dining room within. In Magnolia, it’s more of a country-style diner. Magnolia’s store sells more than pastries, though… in fact, they do sell something called Pigs which seem to be a pastry-wrapped turn on the traditional pigs-in-a-blanket. They also do some weird varieties of Spudnuts, such as peanut butter and jelly – and bacon maple. Indeed.

While the two stores have a different atmosphere, they do share their mix with each other when one or t’other is running low. That’s saying a lot – since it has been made from scratch since the franchise disappeared.

If you haven’t gone for a Spudnut before – you start with the plain Jane glazed round. For one, Spudnuts seem to be thicker to me. Not in the consistency, mind you, but in the fluff. That potato flour fluffs up high. One bite, and you get it. There’s a substance to it – yes, it still melts on the tongue like all good doughnuts, but you feel as if you’re eating something more than just sugar and air.

Spudnuts are the sort of doughnut that prefers coffee to chocolate milk or cocoa. The round has heft. It has delight.

It has an addictive quality that doesn’t leave your system. Nay, I have indeed heard time after time about individuals who have driven three or four hours to arrive while a Spudnut shop is still open. I know – I’ve been one of them.


Here’s the other thing about a Spudnut: they don’t keep.
After six hours you might as well give up on them, put what you have left in a bread pudding or something. The same pliancy that makes the rounds rise so high also pulls them back to Earth and makes them chewy.