This is one in a series on historical restaurants in the state of Arkansas.  For a look at the Arkansas restaurant timeline, click here.
When I was growing up in Little Rock, there weren’t many opportunities to get good Greek food.  In fact, I didn’t know how to pronounce “gyro” until I was a teenager.  My experience and exposure was usually limited to the Greek Food Festival and the Arkansas State Fair.

And then there was Leo’s Greek Castle.  Nestled in front of a shopping center in Little Rock’s Hillcrest district, the blue-awning adorned building has been perched along Kavanaugh since the 1920s.  Since the 1970s, it’s served up a combination of traditional Greek dishes, burgers and one killer Cincy dog to locals who mostly have kept it to themselves. 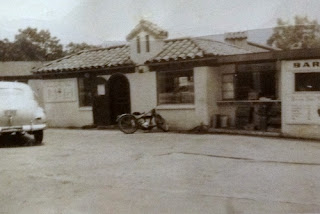 The tiny oddly shaped building started out life as a gas station, oddly enough.  There’s still an empty storage tank located under the place, I’m told.  In the 1950s it housed a barbecue joint come drive-in that offered take-home family packs and curb service.
And then some time in the 1970s Leo’s was born.  Gyros and such were new and unusual for a lot of the folks living in Hillcrest, and hummus even more so.  But the restaurant’s ice cream and burger offerings kept people coming in. 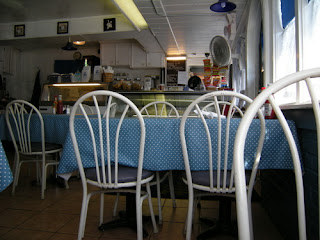 I ask folks about Leo’s from time to time, and people who lived in Little Rock for only a short time will recall the place – even if they only passed through the area once or twice.  Some talk about the tiny triangles of baklava, some about that Cincy dog.  All of them will tell you the same thing – unless you don’t mind literally rubbing your elbows with the folks at the next table, place a take-out order.
That’s because the diminutive eatery’s dining area is about the size of a single car garage.  Within, there are six tables leveraged in to the left of a counter and ice cream case. 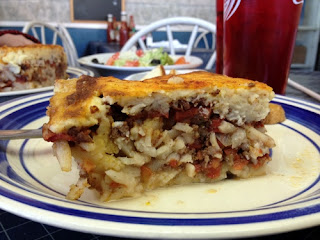 But it has its high points.  It’s the only place in Arkansas I’ve found that serves honest to goodness pastichio (also called pastitsio) with the béchamel sauce and the oh heavens it’s so rich but it’s so good and all that.  It’s also the only place I know where you can get a “Greek Omelet,” an omelet filled with gyro meat, in the state.  And I love both. 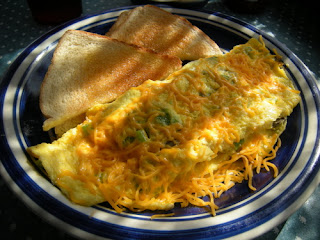 Leo’s has gone through several hands over the years, but it has found stability under Hector Parodi, who I believe has owned the place since 1996 (I was told 14 years by a staffer, but those numbers seem off).  With so many other ethnic offerings brought in over the past decade or so, you’d think it might have suffered.  No.  Leo’s is still going strong.
You’ll find Leo’s Greek Castle at 2925 Kavanaugh Boulevard in the Hillcrest district in Little Rock.  (501) 666-7414 or check out the restaurant's Facebook page.