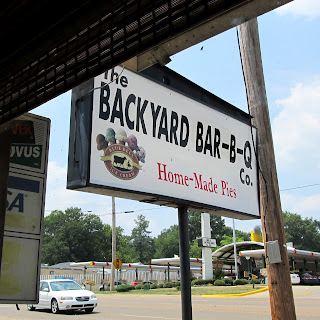 Barbecue and pie... a joint that has both can win my heart over on a mere whim. The Backyard Bar-B-Q Company in Magnolia sure has.

I dropped in with my daughter a few days ago in the middle of the afternoon, looking for a place to cool off and grab grub before hitting the road again. We found the little cottage along Business 82 about three blocks west of Highway 79 on the east side of town. 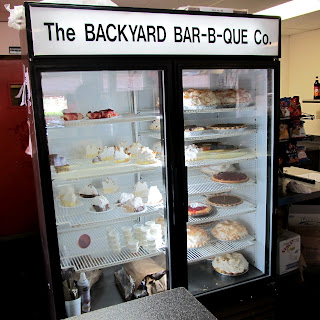 I was surprised when I went to the counter to encounter this remarkably large pie cooler. It was packed with all sorts of pies -- pecan cream cheese, chocolate, coconut meringue... on the recommendation of one of the ladies behind the counter, I asked for a slice of banana pudding... and I will get to that in a bit. 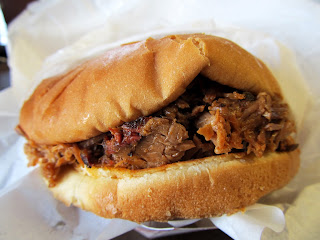 I also asked for a jumbo beef brisket sandwich to share with the girlchild... and was rewarded with this big juicy sandwich. It was packed with fall-apart brisket -- I assume it had been sliced brisket at some point, but it had smoked down to the falling apart stage. The nice hickory-cast smoke flavor was delectable. It had been enhanced by a thin and meagerly applied sweet and tangy sauce with a whop of black pepper to it. It was pleasant and relaxed and mild. I tried a little of it with some of the house barbecue sauce, which seems to be a thicker version of what was on the meat... and it was all right, but unnecessary. It was enough for me and Hunter to share. 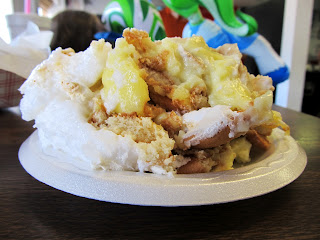 Our pie? Well, that’s up for debate. I’m not sure whether it was a pie or not. It’s listed on the menu under pies, but it’s also a little bit of everything. See, the banana pudding pie contains a banana custard, banana slices and vanilla wafers... but it also comes on a crust in a pie pan, topped with meringue. All I can tell you is, it’s tasty. 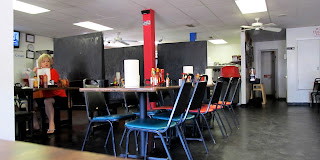 Now, while I was there, I watched a big plate of pork ribs being delivered to one lady. There were enough slabs of meat on her plate to fill an army, and I was relieved when I saw others join her. A substantial plate, I tell you what. 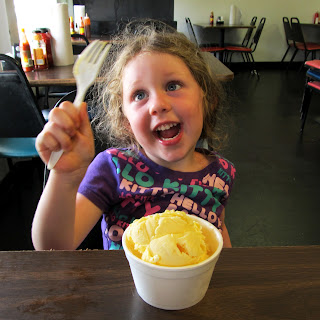 So I’m about full, and Hunter has told me she’s about full, and she offers to procure a box. Well, at three and a half, she’s independent as all get-out. So I let her go to the counter. Imagine my surprise when she shows up with a bowl fo vanilla ice cream. My child... the scam artist. I went up and offered to pay for the dessert and was tisked away -- they thought she was cute. That was rather generous of them, and I appreciate that. 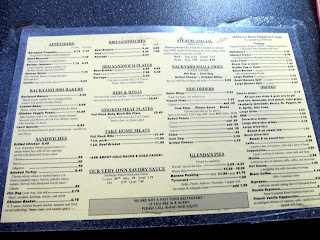 I’m going to have to stop by again, though. As I was communicating my location via Facebook, I was told by several people to give the pecan cream cheese pie a whirl. I was stuffed as a tick and simply didn’t have room. Next time, I’ll have dessert first.