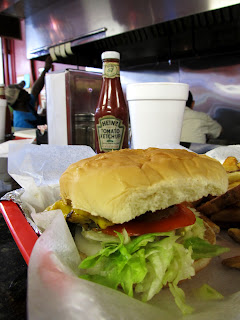 There has been these past two years a great wringing of hands amongst burger lovers in Central Arkansas, all over a single burger joint. And that wringing has been justified.

See, it’s all about The Band Box, or The Box as it is affectionately known. In June 2010 the proprietors announced the place would be closing its doors ahead of a move to 7th and Ringo. The building it used to be in had been purchased by USA Drug for the construction of a neighborhood pharmacy. I even wrote about the whole mess. They swore the new place would be open within a month.

First it was permit issues. Then something with the plumbing. Then this. And that. And frankly, a good number of people wrote off The Box. They assumed that if the place didn’t reopen on time, or even within a year, it was gone for good. There was no way it would be right.

I’m happy to say, those of little faith? They were wrong. 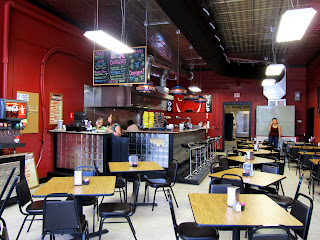 Today The Box reopened in its new location, finally, after all those months. Heck, let’s be honest, years -- it’s been about two years since the old joint closed its doors. I dropped in right before the official soft opening at 11 a.m. to see what was going on.

The new place is spiffy. It’s painted red along all walls, and there are plenty of new tables and chairs. Remember the old formica-topped bar in the old place? It’s been replaced with a smart new granite countertop and chrome-and-black barstools. 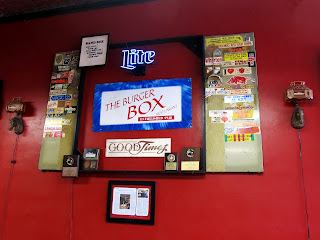 But there are bits of the old place there. On the wall you’ll see one of the old joint’s most memorable features -- decades of preserved bumper stickers for generations of radio stations and politicians. How’d they do that? Look closely. Those are the old refrigerator doors. You remember those, right? They were on the fridge that was between the big dining section and the kitchen. Yes, you can still read “Wilbur... Kiss Your Fanne” and other sorts of things on those doors. And if you don’t know who Wilbur was or why he needed to kiss Fanne... well, you musta not grown up in Little Rock, at least not back in the day. You probably also don’t know what the alternate name is for I-630. 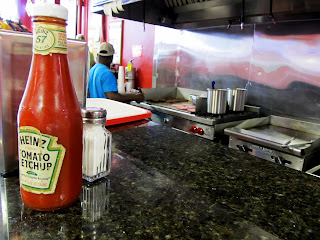 The griddle is there... the same griddle as you remember.  And they even kept the ketchup bottles from the old place.  Don't worry, they've been washed.  When I first got there I saw the wait staff filling the bottles with a funnel.

Anyway, a lot has been preserved, but a lot is new, and it’s just shiny and pretty. And one major thing has changed. Instead of table service, you now order at the counter and go find a seat. They’ll bring you your burger, but you gotta go order it yourself and get you a drink. See? 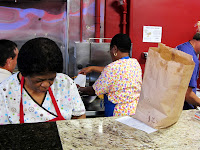 I was one of the first to place my order today, and I sat at the counter and watched Miss Mae work her way through several orders while I was there. She’s always double-checking. Arthur is still on the griddle, too. 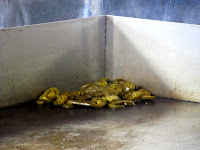 I did notice something I’d never witnessed before... I made it there early enough to see the seasoning of the grill. At least part of it. I was surprised to see Arthur turn out a pile of jalapenos and bring them to a glorious sauteed perfection. Then Terry went and got a bowl of grease out of the fryer and poured that on there. I don’t think that’s everything to do with the flavor, but I gotta wonder. 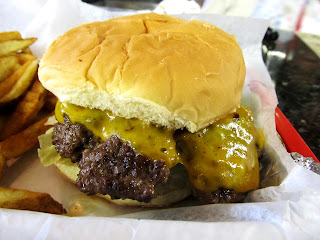 Which brings me to the burger. You can get yours with cheese -- American, Swiss, Cheddar or Hot Pepper Jack -- and with grilled onions or bacon or whatever you like. But a traditional Box burger comes with mayo and mustard, lettuce and tomato, pickle and onion on a toasted seedless bun. Mine was a little off-center, thanks to the instant glue the Cheddar cheese made when it came into contact with that top bread. But it was every bit as good as I remembered it. The patty, charred and packed with flavor, was a trip down into my deepest grease-lined burger memories. 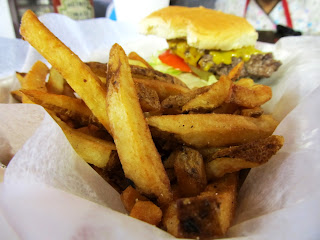 And then there were the fries. I have to say, they were a little different. Yes, there’s still that great spice to them, but the ones I got were crispy and not the least bit greasy, which was a surprise. My dining mate and I came to an agreement that they were better, and likely as not they were that crisp since they were the first ones out of the fryer. 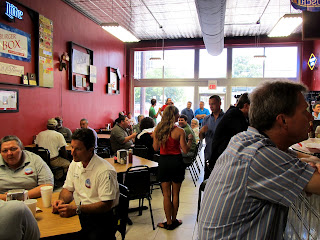 By the time I had finished, there were three dozen people waiting to order and a couple dozen already seated, some dining and some waiting. Someone had placed a humongous order of more than a dozen burgers, and that was slowing things down. Still, everyone seemed to be in a good mood and everyone was patiently waiting for their chance to experience a flavor that’s been missing from the Little Rock burger scene for so long. 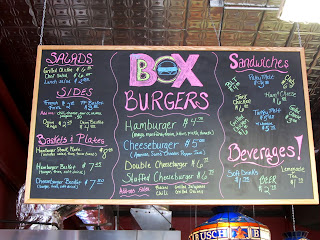 The Box is now at 7th and Ringo. For now it’s only open for lunch Monday through Friday, 11 a.m. to 2 p.m. Click on this picture here and you’ll see all the things that are on the menu. They didn’t have onion rings for opening day, but those are coming. If the burger is any indication, it’ll be worth the wait.