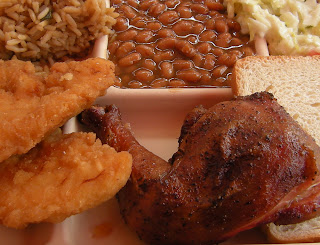 Every small town in Arkansas seems to have some sort of event, some defining bit of celebration saying "yay, our community is here! Come join us and have a good time!" The celebrations run from the very big (Riverfest in Little Rock) to the very small (countless area picnics and gatherings almost too small to mention) but they are there and they're part of what makes that community unique.

In Yell County, it's been the Mount Nebo Chicken Fry for more than 60 years. Used to be, the event was held atop Mount Nebo outside of Dardanelle. But three years ago it came down the mountain and found a new roost on the banks of the Arkansas River at Dardanelle's Riverfront Park.

Why? Chamber of Commerce folks say it's because folks weren't really willing to drive up the mountain any more. Could have been volume, too; I've made that hairpin journey many times myself, and it's about the worst place you can imagine to get stuck driving in the rain. Well, outside of a washing gulley...

This year, the Chicken Fry was more than a sit-down dinner and activities all around. It was also a carnival, for the first time ever. A carnival, complete with concessions and games and amusement rides, no joke. Plus the event had been expanded to two days.

Well, naturally, I wanted to go see what it was all about. It has been years since I went, and the cloudy bits of my memory mostly recall children on a playground and grease-tipped fingers holding onto a meat-wrenched bone in a state park pavilion.

After paying my $2 parking fee and finding a spot I set off across a vast field towards the attractions.

First thing I noticed was an apparent obstacle course. This was a setup by 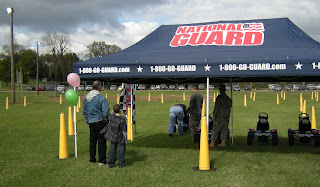 the National Guard, who provided cool looking pedal cars for kids to try out on the track. An unusual recruiting tool, sure, but it looked like fun.

I passed by many vendors selling all sorts of wares. Here were the locals -- one man was marketing his photography studio, another was selling knick-knacks, a third pet clothing. Their popup tents perched in the tall grass as they huddled behind tables in coats, jackets, and even blankets to sheer off the startling cold.

I think the cold surprised everyone. After all, the festival is usually held in September, sure -- but no one expected this sort of cold in the middle of October. The cold front sitting on top of the area was simply augmented by the wind sweeping off the river.

The tarps from the popups flapped in the breeze, and on the wind you could hear the hum of electricity and the occasional scream or holler from a child on one of the amusement rides. But there was something else, something that sounded like a badly tuned golf cart puttering along on a spent spark plug. This noise dragged me along past the tents and their bright and colorful wares. 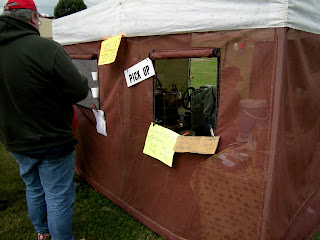 The noise came from a small 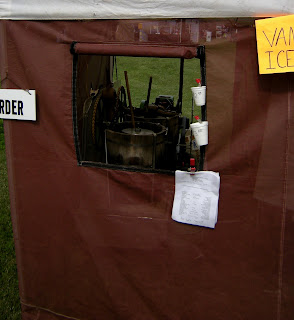 brown-clad tent with two windows cut into one side. The effort was to mask what was inside, but you could see through the mesh this incredible contraption... two large old fashioned ice cream tubs hooked up to a belt and generator. On this startlingly cold day, a gentleman was selling homemade vanilla ice cream for $2 and $3 a cup. And people were lining up for the frosty treat. Ah, free enterprise.

I passed by other vendors selling everything from Mexican food to barbecue, past the stage where the bleachers sat idle and empty, past even a hopeful entrepreneur selling hot chocolate and popcorn. There was a big red and white tent ahead, and I knew my goal had to be under its top.

And I wasn't disappointed. Several ladies welcomed me under its vast awning, and asked me if I was hungry. Well, of course I was. And after handing over my $5 toll, I was rewarded as they filled up a tray with eats for me... creamy coleslaw, cold baked beans, chicken fried rice, a marinated chicken leg quarter (I could have chosen a breast instead), and a couple of fried chicken tenders. There was even a gentleman at the end of the stretch of tables who poured me a glass of iced tea. I carefully balanced cup and tray and found a place to sit.

Of course the Chicken Fry is about eating... eating with your community. And in years past I had recalled jockeying for space at a crowded picnic table, elbowing my way in so those elbows would have plenty of room for grabbing a chicken leg or two and going to town. Yet there were maybe a dozen people spread out amongst the dozen tables huddled under that second tent. At first I thought it might be the time of day, but a quick check of the time showed 12:16 on a Saturday, prime time for lunching. Perhaps once again the cold was to blame. 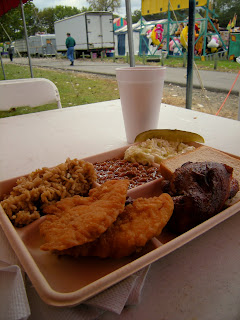 After my prerequisite photographing of my food, I found myself wondering where to start. I found the slaw to be nice hefty slices of cabbage in that sweet creamy sauce, the beans to be sweet and smokey, the rice to be unexpectedly on the spicy side and lovely and warm. My apprehension about the lack of fried chicken parts (tenderloin pieces aside) was quickly crunched away with the deliciously marinated leg section I had been given. Pink meat with flavor still warm from the grill was enough to make me not miss that breaded crust any longer. I eagerly demolished it and began on the tenders, which I wrapped with the given slice of bread and used to sop up bean juice. I even enjoyed the pickle. As I consumed the repast, I watched people passing by. The shock of the cold had stirred lots of people, some of whom came out to battle the river wind with quilts and overcoats. I was startled by the appearance of a trusty from the local jail, emptying trash. Talk about community punishment... the poor young man doubtlessly felt shame being out here at this annual event, wearing the bold gray and white stripes of the criminally convicted, having to bear the eyes of folks who might recognize him. I chose not to photograph him. Whatever his crime, he is doing his part in serving his sentence, and need not be immortalized in an outfit he'd probably soon rather forget.

Fed and chilly, I went off to search out other entertainments in the park. I passed by more vendors with Walking Tacos (taco filling and veggies piled on top of Fritos in a bag), corn dogs and funnel cakes, and Strawberry Shortcakes on their marquees. A pizza vendor's offerings scented the air with the richness of sauce and seasonings. Kids played in a nearby house of mirrors with a Mardi Gras theme. 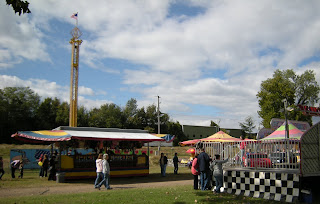 Carnies hollered at passersby offers of "a prize every time" with booths to pop balloons, throw a ball into a basket or use coins to knock other coins off a ledge. One called after me, asking "Janis" to stop by and shed some tie-dye luck at his booth. It made me giggle. The "midway" as it were was about a dozen carnival rides, and it had apparently just opened. For $15 one could purchase an armband to ride all afternoon, but few had actually come out at all at this point. A lone girl rode a ride for tots, while half a dozen clambered aboard The Eclipse, a more daring cross between a Tilt-A-Whirl and a Flying Saucer that would unsettle more tepid souls as I. 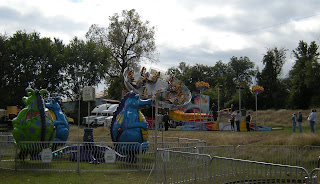 The sun was poking through more now, and its radiant heat started working back the chill. More people were coming out now, and the sound of hollering children and parents calling after them was carried on the dampened wind.

I wandered back to the staging area, where still again no one was standing around. Yet the announcer's booth was bustling, as a lady announced that three members of one family had signed up for the "Lovely Legs" contest. That was a familiar name; the little contests that one might boast of for the next year was just one thing I remember... there had also been a chicken catching competition at one point, but I saw no live chickens in sight anywhere. I wondered when the chicken calling competition would begin.

The Lions Club was selling raffle tickets, and I was sure tempted to purchase one for a chance at $400 worth of beef.

I wandered along, stopped by and talked with the folks at the Chamber of Commerce trailer, and wandered on out towards the vendors one more time. A cluster of Cub Scouts were selling Boy Scout popcorn, and I took home a tub.

I wish I'd had more time to spend on the banks of the Arkansas River, but pressing matters and other assignments complicated my day.

As we all know, some things change and some things remain the same, and I found myself noticing the things that hadn't changed from my last visit to this festival years ago -- the happy and friendly women serving the chicken; the local high school students in their sweatshirts chatting, some paired up and "going together" and some of the local football guys talking shop; children with sweets and grins; the spirit of free enterprise represented in booths of colorful quilts and cloth constructions. Much the same as other festivals, sure. Alas, as fall widens and winter nears these little community festivals will fade away, only to resprout mid-spring to once again herald towns large and small and their residents and their most popular food products. Here's to such festivals, long may they endure.
Told by Kat Robinson at 8:55:00 AM