A Stop In at Atkinson's Blue Diamond Cafe in Morrilton. 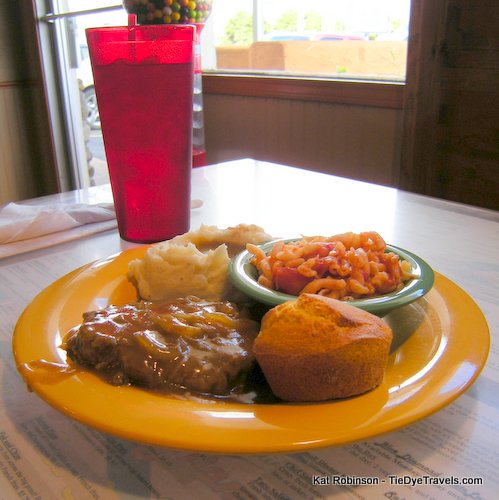 Wes Holden suggested I check out Morrilton's Blue Diamond Drive-In, and since I was headed that general direction I decided to take him up on it. Good suggestion, Wes.

The menu contains a lot of what you might expect from a drive-in -- lots of burgers, hot dogs, fries.  But it also contains things like Pat's Patty Meltdown -- a patty melt with a heaping pile of grilled onions instead of bread -- and The Shaner, a club sandwich that apparently rivals The Stoby for its three meats, two cheeses, and all the fixings.  I went for the daily special and more... on the jump. 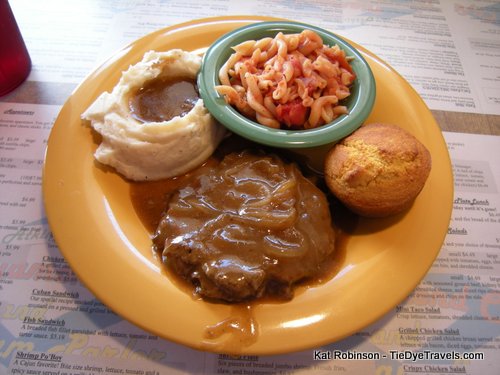 The cafe offers a special each day for $6.49 -- a main dish, choice of two sides, and bread (a roll or cornbread). Wednesday's was Hamburger Steak. I chose the creamed potatoes and the macaroni and tomatoes... and enjoyed a comforting and delicious Arkansas meal. The caramelized onions in the gravy made the burger steak and potatoes pretty darn good, and the cornbread was just slightly sweet. And it has been ages since I had macaroni and tomatoes -- it's been far too long since I've had this Arkansas dish of stewed tomatoes and spices with pasta. 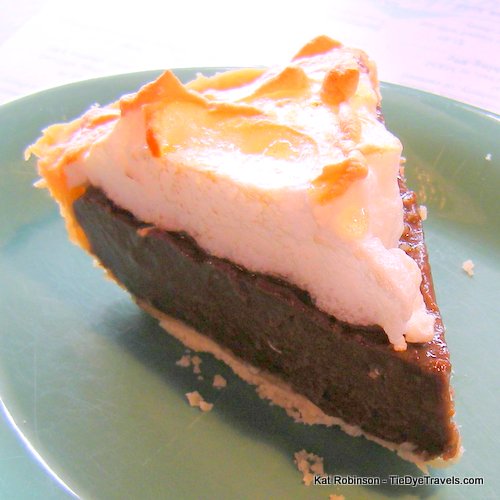 But the real treat was dessert. I had just about settled on the Strawberry Shortcake (after all, Blue Diamond is also an ice cream parlor) when the waitress mentioned that two sorts of pie were also available. She talked me into it (she, and the compounded days of rainy weather that called for a warming of the soul). That thick slice of chocolate meringue pie was a decadent yet filling dive into the easy chair of the taste buds for me -- a rich and firm chocolate custard that wasn't too sweet topped by a buttery meringue that clung to its custard counterpart like a good meringue should. The homemade pastry crust was also welcomed. 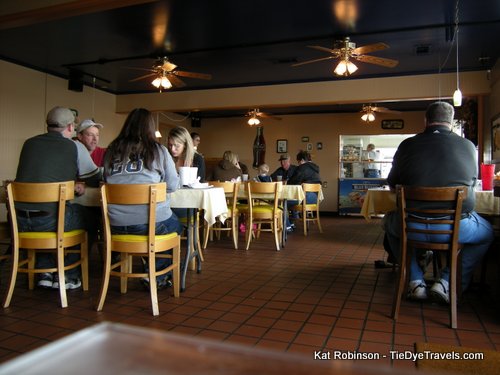 You'll find Atkinson's Blue Diamond Cafe and Ice Cream Parlor off the Highway 95 exit in Morrilton -- past the Pizza Hut on the left. And if you want to know what the daily special is, check out their Facebook page.
Told by Kat Robinson at 2:31:00 PM