What a Deal! Chicken Mart.

I offer this new segment of Tie Dye Travels for those who have asked me over the years, "where do you get all those great deals?" I hope it comes of good use to you. 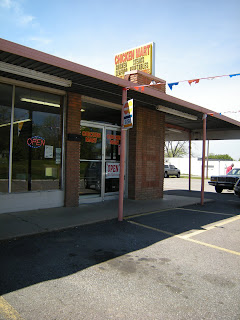 When I first travelled to Russellville in the summer of 1990 (for band camp, in case you were wondering), I was told two things: I had to go to Feltner's Whatta-Burger, and if I could get to Chicken Mart I could get anywhere in town. It was a bit of a joke, but it also was a bit true.

Not that it's all that hard to get to Chicken Mart. You just take exit 81 off Interstate 40 and head south on Arkansas (also known as Scenic Highway Seven), go through the heart of town, and about 19 blocks further along. If you get to the lumberyards, you've gone too far -- though it's hard to miss the bright red and yellow signs announcing the place. 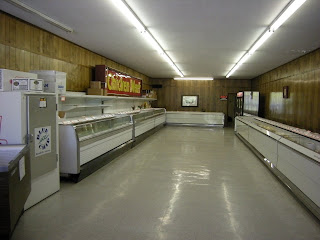 Chicken Mart has been there longer than I've known Russellville -- and almost longer than my husband (who grew up in Russellville) has known it. He can remember back when the building housed a grocery store, back when he was a kid. But long before he could drive, it was Chicken Mart. And it still is.

Other than being a fun name to say (with the accompanying licking of the knuckles and smacking of said knuckles against the ceiling of the vehicle you're riding in, if you're, say, 17), Chicken Mart is also a pretty cool deal... something to look for during these rough times. I make it a habit to stop in any time I am in the area -- which is usually around once a month, since Paul still has family in said parts.

Which brings to mind the old chicken commercial and "parts is parts" I remember from my youth -- but that's neither here nor there. 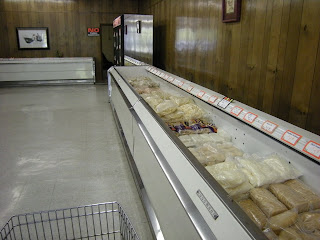 Anyway... it's a small store, with just the cases along three walls. And what you'll find in those cases changes from week to week, depending on what the proprietors have happened to pick up. With four different Tyson operations in the area (back in my pizza delivery years I used to deliver to all four, including TVDC, almost as much fun to say as Chicken Mart) and with the extraordinarily large ConAgra complex in town, Chicken Mart gets more than its share of good deals to distribute. 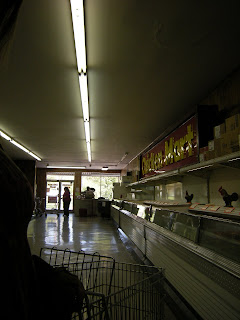 But what sort of deals? Well, I'll tell ya... they do change a lot. The right-hand case usually carries a variety of products that range from bready-things to potatoes of different sorts (JoJos and seasoned fries and shoestring potatoes and hashbrowns) to breaded squash and okra to sausage links to bacon. The left-hand case is usually variety after variety of flash frozen chicken -- buffalo wings, pecan-encrusted chicken breasts, chicken-Os, country style, fully cooked, Southern style, extra spicy, BBQ, you name it. The back case usually has a selection of less chicken-y things such as pork chops or lunchmeat. And there's a case in the back right hand corner that 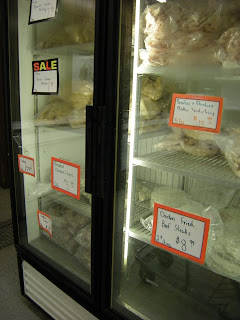 carries things like five-pound bags of chicken breasts and chicken gizzards -- and my favorite, the shattered chicken.

Ah yes, shattered chicken -- chicken breasts that shattered upon flash-freezing, thereby rendering them un-perfect. Well, imperfect for cosmetic reasons -- and because smaller pieces cook at different times from the rest. So these shattered bits are bagged in five pound increments and sold for the fantastic price of $5.99 each. I personally use the little bits for stir-fry and the somewhat larger bits for curry -- but that's just me. 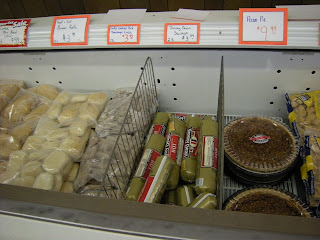 I don't do the whole pork thing for allergy reasons -- but I do notice the specials and have seen 15 pound boxes of bacon recently for $15.99 and Jimmy Dean sausage for $3.99 for a two pound chub. I'm currently curious to see how the eight-pack of cheese-garlic biscuits I just picked up for three bucks come out -- I'm wondering if they're similar to those Cheddar Bay Biscuits that keep people going back to places like Red Lobster.

And that's just the thing -- when something sells out at Chicken Mart -- it's gone. Which is why I check back in every time I come through town. Sometimes it's just a five pound bag of seasoned fries for five bucks. Other times I have wobbled out under significant chicken weight from a rather good deal or two I couldn't resist. And if I plan to cook for a crowd, I have to drop by first.

Email ThisBlogThis!Share to TwitterShare to FacebookShare to Pinterest
Labels: Russellville