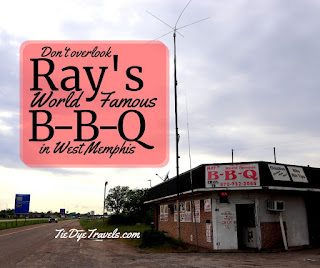 The diminutive, windowless building on the I-55 access road in West Memphis might seem unimportant, but within is a host of barbecue wonders.

Shame on me for missing one of the most important Arkansas Delta barbecue stories out there. I know of several places named Ray's, but it wasn't until this most recent visit that I was directed towards this tiny building beneath a CB tower near the intersection of the access road and Mound City Road. And even when I drove up, I was still uncertain. I should have known better. 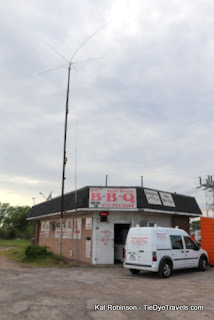 Ray's World Famous Barbecue is, contrary to its name, a local secret. It's also a truck driver's delight. The Meat Man van delivers barbecue to truckers on the "island" between I-40 and I-55 in West Memphis, when they call in their orders via telephone or - get this - CB radio. And that CB stays active.

My first visit on a bright and shiny Tuesday afternoon brought me to the door craving chicken. I found a spot right along the road to park (the tiny parking lot holds a couple of cars, tops) and got out. The CB tower was the first thing I noticed, peering over the building with its rather odd angled doorway. Angled, I mean, as in it was planted at a 45 degree angle right at the front corner of the building. There was an orange shed next to it that may have been the smokehouse. 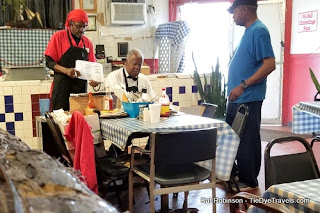 I was greeted by a couple of men when I came in - one who might have been a customer, but was very cheery. I noticed first the long black cushioned bar that lined the entire back wall - a wall, I must point out, was at an angle as well. In fact, the entire setup was not quite square. 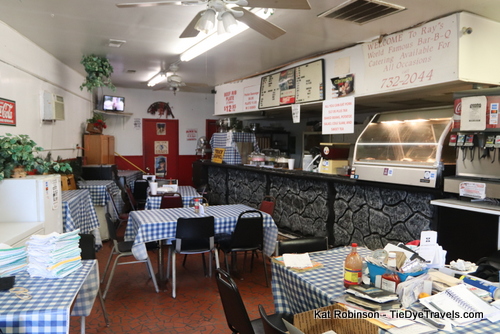 The gentleman behind the bar pointed up at the menu board, which bore few prices, before suggesting I come over and peruse the paper menu. I knew I was wanting chicken, and went ahead and ordered half a bird with two sides. 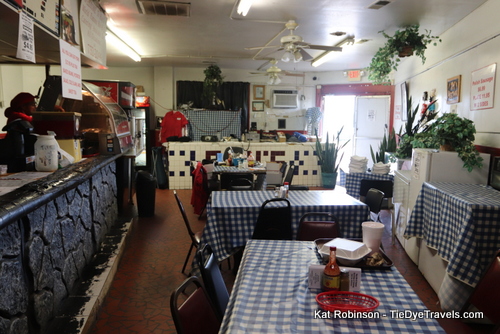 The interior was mostly white and red, with a small handful of tabletops. An old, past-its-prime jukebox was attached to a wall. A small selection of quite obviously homemade cakes were housed in stands on the counter itself. And near the front door, there was a long tiled bar - those tiles spelling out Ray's - on which sat a large CB radio.

My host asked me if I'd like my chicken dry or wet. Of course, I chose wet.

The meat, smoked earlier in the day, was wrapped tight in plastic wrap and housed in an old waming cabinet. I could see beef and pork ribs, what appeared to be a portion of a pork butt, and some tightly wrapped chickens. Turkey legs were on the menu but I was informed they had run out for the day. 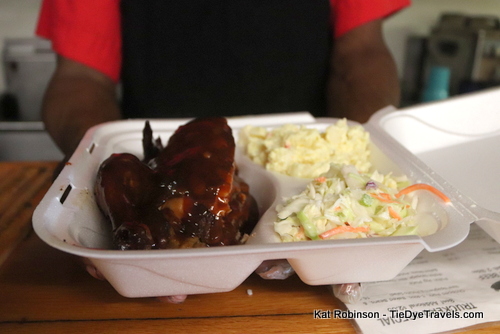 The gentleman behind the counter took another order by cell phone, and by the time the order was placed he had a box out ready for me. I was able to take my order and hit the road within about 12 minutes. 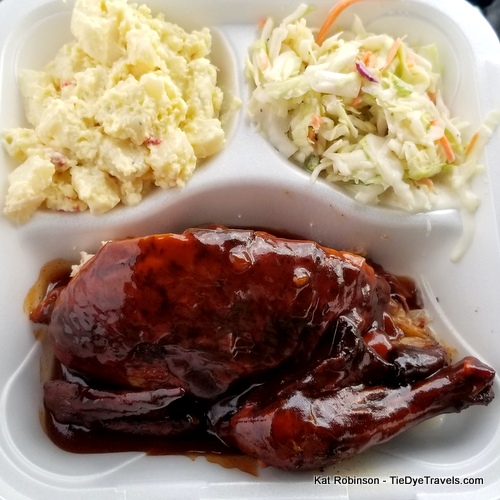 Within that box was a gorgeously sauce-enrobed half of a chicken, a spot of slaw and a pile of potato salad. The latter was a slightly sweet, mustard-and-mayo mix, while the slaw was somewhat standard sliced cabbage and carrot with a creamy dressing. The bird was a little light on the smoke, but the skin was delightfully pliant, and the sauce sweet, syrupy and thick. There were light hickory notes to it, a touch of black pepper, and what might have actually been honey.

I made a note to get back by for more smoked meat, but found myself running out of time. On my way out of town, I stopped in for half a rack of beef ribs, but ready for the road. I received this well-wrapped set of ribs, each one with about half a pound of meat on it, which I later consumed between errands when I got home. Though there wasn't a lot of spice to them, they had been slow smoked and had a nice flavor. Better yet, they were tender yet still attached to the bone, not overcooked, not undercooked.

My one bit of confusion over Ray's is the title World Famous. I've covered food a long time here in Arkansas and was unfamiliar with the joint, and few I know had tackled it before. Perhaps it's wishful thinking. In that case, I certainly hope Ray's World Famous B-B-Q ends up with a smacking strong amount of wish fulfillment. 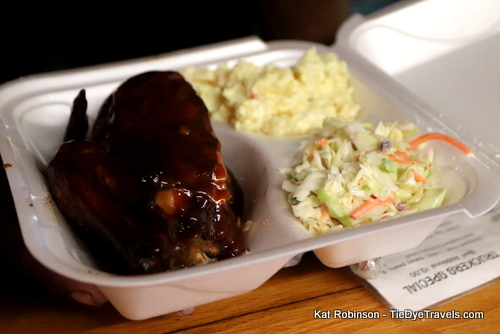 You'll find Ray's on the south service road for I-55 (which is on the north side of I-55, for what it's worth) just west of Mound City Road. From the east (Memphis), take I-40 to the Mound City Road exit, turn left to go under the overpass, continue until you reach the T intersection and turn right - it'll be on the right. If you're coming from the west, take the Martin Luther King Jr. exit off I-55, cross over and take the first right after the off-ramp once you cross the overpass - Ray's will be on the left.