A little dairy bar on US Highway 70 is the single spot where Alton Brown had an Arkansas bite when he Feasted On Asphalt along the Great River Road. But the woman who runs the place and the pie she makes are both worthy of tales to share. Let’s visit Ray’s Dairy Maid.


Grav and I were into the early hours of our 60 hour trip spanning the center and upper end of the Arkansas Delta, searching out pies for the book I’m working on. By the time we got to Barton, we’d already been through three other pies and had the disappointment of two others. I won’t go into the one – it was flat and smelled of sawdust somehow and I pray the restaurant just had an awful day. The other restaurant had no pie, though the menu proudly proclaimed it. 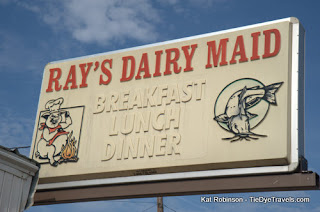 Grav and I were nose-on in the little red Civic, headed to Helena-West Helena for a brief look around. We didn’t know of any pies there, but I knew of one along the way we needed to capture for the book. We needed to get ourselves a slice of coconut pecan pie at Ray’s Dairy Maid.

The low-slung dairy bar has sat alongside US Highway 49 for better than forty, maybe fifty years. No one really remembers for certain the day the place opened, but it’s been around long enough for it to long outlive Ray. Once just a stand where you picked up your food out front, the dining room was later added for patrons to dine in rain or shine. These days, it’s of note because of its particularly good spot for diners to stop on their way to the King Biscuit Blues Festival. 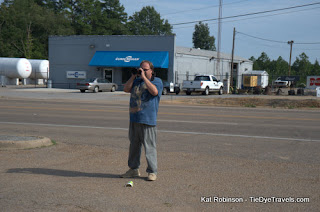 We pulled in and parked next door, the cars out front already showing us the place was busy. Grav went out to take a few photos before we headed in to sample this culinary marvel – one he’d never encountered. 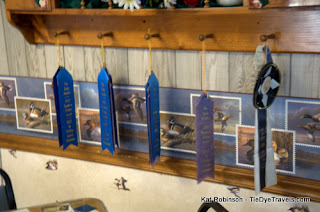 The smaller tables were already taken, so we grabbed a spot at a big table in the back, under the edge of a makeshift ribbon showcase on a hat rack. The tabletop was covered with glass, under which a smattering of business cards were stuck.

A lady who appeared to be 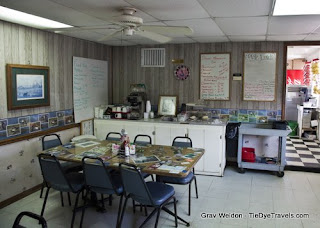 in her 50s came out and chatted with other customers, and us as well, in-between taking orders. She looked briefly surprised when we only ordered a slice of the coconut pecan and a fried apple pie, but she didn’t ask questions. She just answered them and unrolled a story.

The first story she told was about Alton Brown – or, rather, the producers who rode ahead down the road while Mr. Brown was in Helena. They were looking for a bite to eat, something that would be included in his television show (and later a book), something on the fly. Mere chance had aimed them in this general direction. 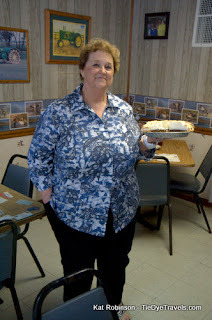 As she was talking, I realized I was in the presence of one Deane Caveatte, otherwise known as Nana Deane.

She continued on, talking about how gracious everyone was, though speedy. She was asked if it was cool to shoot a TV show at her establishment. She signed some forms. Along comes a few more motorcyclists, including the aforementioned Mr. Brown. He came in, talked with her, asked her about the pie, ate the pie, carried on.

Nana Deane was very surprised when a short while later, she was watching ABC’s morning show and saw her recipe 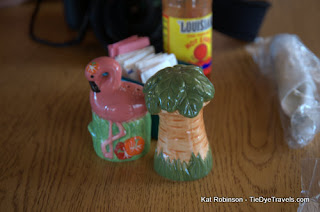 featured. Surprised, but a happy surprise.

She’s seen a lot of folks come in just because of the show and the book, and she has always taken it in stride. And when I asked her to tell me more about the restaurant’s history, she obliged. 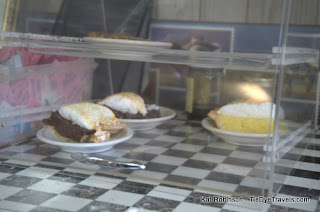 Ray’s Dairy Maid had a predecessor, a place called Ray’s Kool Freeze, down the road in Marvell, opened in 1955.. It was a two-sided restaurant – common in the South before integration. Deane started working at the Kool Freeze when she was 14. When Ray’s Dairy Maid came up for sale in the 1970s, Deane bought it but kept its original name. She told me folks have continued to come in over all those years from as far away as DeWitt and Marianna for a bite on a weekly basis. 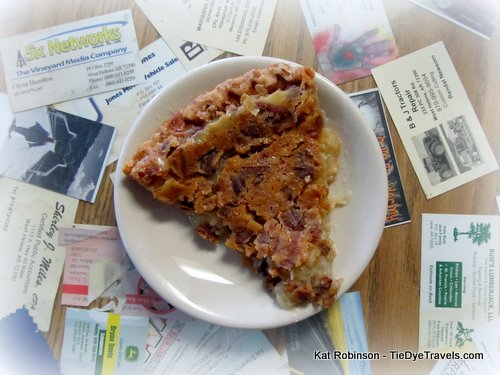 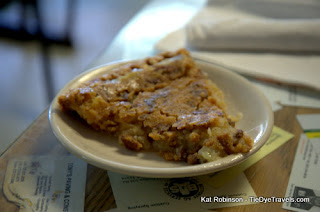 She continued to talk as Grav and I did our dance, shooting the pie with our cameras from different angles. But she paused as he finally took a forkful of that coconut pecan pie, and waited for his reaction. Grav started to bob his head enthusiastically and pointed at the pie with the fork. “That’s freaking incredible,” he told her, with that little bounce in his arms. 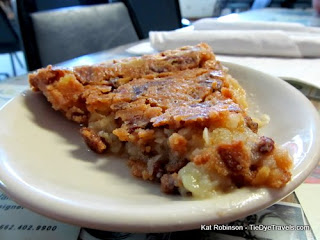 He wasn’t kidding, either. That coconut pecan pie was a perfect smashup of the two, with toasted flavor of both nuts and flakes together in a buttery, creamy, syrupy filling.

“You know, the recipe is out there,” Deane told us. I instantly asked her if I could have it. She went to the back, came back with a copied sheet and handed it to me.

“It’s already in a book, but you’re welcome to,” she smiled, and I carefully folded the sheet and tucked it into my bag. Then we asked for boxes. 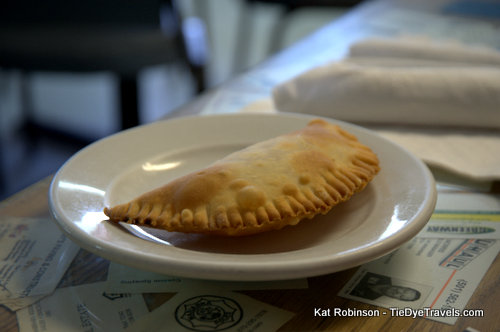 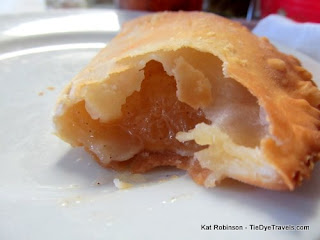 The fried apple pie, by the way, was similar to what we’d had at Nick’s BBQ and Catfish – flaky flour crust, this time packed with cinnamon and sugar apples, exactly what I expected. The crust was a little bubbled from the frying but not greasy at all. ***NOTE: Later I would find this was likely a Flywheel Pie. 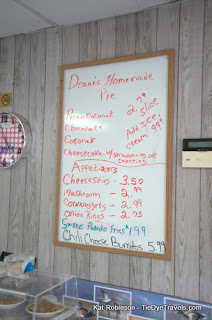 After this particular August visit, I would find my way back to Barton. It was two months later, and I was traveling with journalists brought into the state to learn more about Arkansas. We’d spent the early part of the morning in Marianna at Jones’ Barbecue Diner, with stops along the way at Louisiana Purchase State Park and elsewhere. When it came time for lunch, I suggested Ray’s.

That’s how a good dozen and a half folks ended up descending on the place for a bite. I at least called ahead, and there were a couple of tables towards the kitchen pushed together ready for us. Under the edge of one of those tables, I saw my business card. 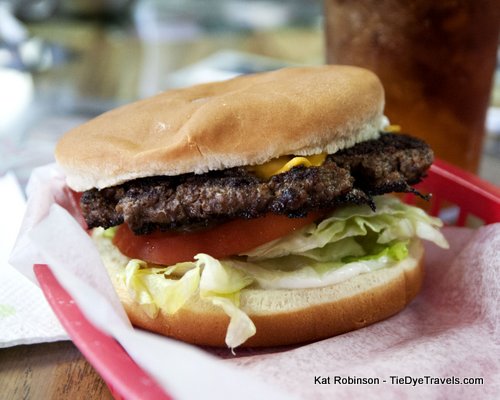 A burger was on my agenda, because while my compadres had dined on Mr. Harold Jones’ finest, I was out the experience due to not being able to eat the pork. A burger was what I got – handsome and fine, naked white seedless bun, lettuce and tomato and a slice of American cheese thrown atop a slightly singed-on-the-bottom smashy patty that had only been spiced with salt, pepper and griddle grease. A good two-hander. 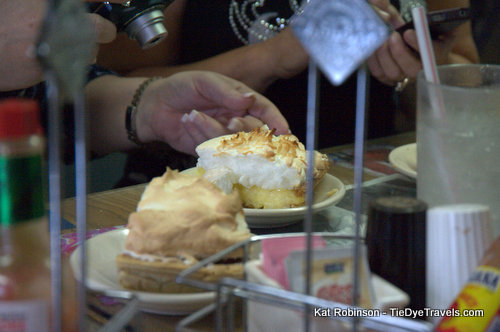 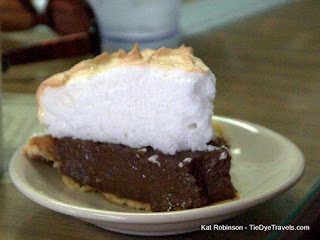 My companions, though, were losing their cool over all the decadent pies Nana Deane had in her repertoire – coconut meringue and chocolate meringue, plus chocolate and peach and apricot fried pies, some with ice cream. Of course, the slices of coconut pecan pie went first, ordered, photographed and shared 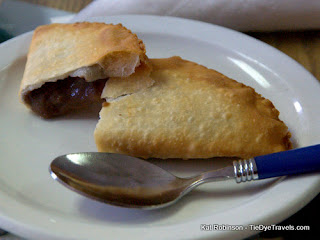 around the table by journalists from across the states. I was proud.

Ray’s Dairy Maid is a splendid place. And I’ve dreamed of it any time pecans come to mind. More than once I’ve found a good reason to divert my travels from wherever I was planning to go to sweep by, duck into the 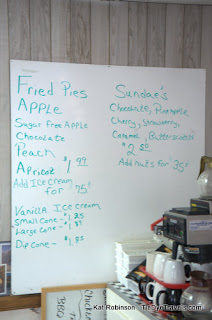 dining room to check the pie case and then order up front at the window. In fact, on this particular trip through the Delta and despite being quite full from Pasquale’s Tamales (which deserves its own fine story), we stopped in, parking at the business next door because there were better than three dozen cars in the lot. Again, Grav shot the interior, where there wasn’t a spare table to see, and I counted the slices. And then, greedy person I am, I ordered both of the slices left of the pecan coconut pie. 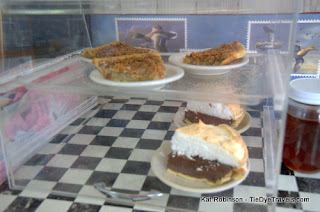 They didn’t make it back to Little Rock… in fact, they didn’t even make it to the fork, with each of us swiping chunks off our slices with our fingers from their white clamshell boxes.

Ray’s is also a true and dedicated drive-in, with good burgers and good 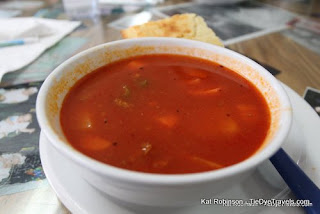 plate lunches and a killer breakfast. And the shakes are gobstoppingly good, thick and packed with just enough extra chocolate or fruit in them to make you shut up and enjoy the ride when you’re headed down the road. It’s enough to make you want to give up the quest for classic restaurants for the day, if you do get a full meal there.

But that all depends on whether you get a seat. Be patient. It’s worth it. 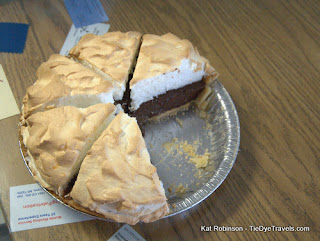 UPDATE: Nana Deane sold Ray’s a few year later. It stood a season as Christy’s before closing for good. I miss the stop – one Barton desperately needs. But at least that coconut pie lives on, held between the covers of two books by two very different people living two very different lives, two people who celebrate food and the people who make it. 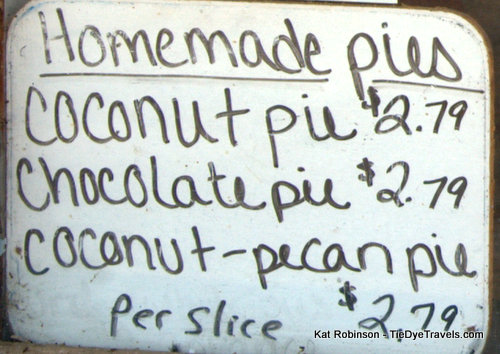