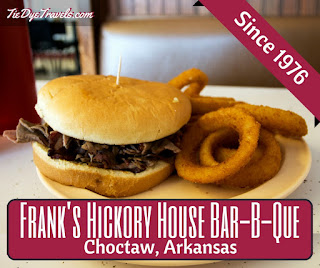 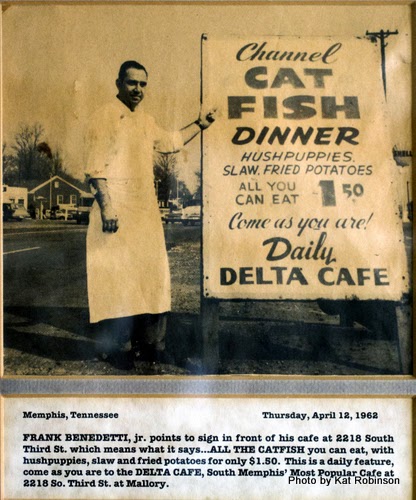 Frank's Hickory House started off in the 1960s as the local dairy bar... but in 1976, Frank Benedetti Jr. bought the place and, with his wife Jackie, moved in a barbecue restaurant. Frank used to have a joint in Memphis called the Delta Cafe -- which, as you can see from this photo, served "Channel Cat Fish Dinner Hush Puppies Slaw, Fried Potatoes All You Can Eat 1.50" -- and which said to "come as you are!" 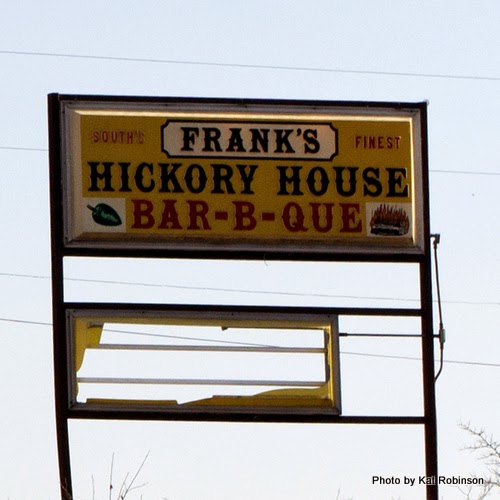 I couldn't tell you Frank's exact reasons why to relocate his family to the quiet Ozark burg of Choctaw, but I can tell you it's a beautiful region of the state, with rolling hills to the south and the canyons of the Ozark plateau to the north -- and Greers Ferry Lake just a few miles to the east. But I can tell you that his Hickory House was a hit, and it became a classic in the region.

Frank retired in 1986, selling the business to his son Joe and Joe's wife, Lora. They kept it just as it was, and it's still just as it was, except there's a whole lot of history all over the walls these days. That includes photographs, newspapers, trophies, bobble-head creatures and a couple of gigantic aloe vera plants in the front window (but don't touch them, please). 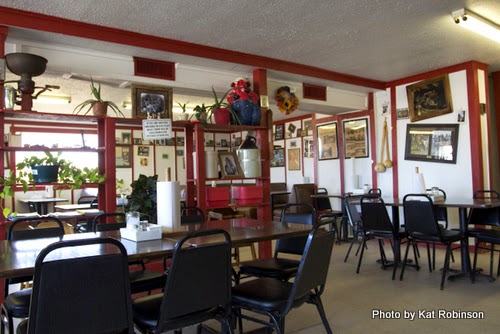 I dropped in on my way home one day... curious about this place I had passed time and time again. Family outings took me up US 65 on a regular basis as a child, but we hardly ever stopped much of anywhere. And while I've made good on other stops throughout the years, I'd been waiting for this one. After all, there's a sign for "broasted chicken" out front of the little brown shack. But that sign belongs to the gas station next door -- which discontinued that broasted chicken eons ago. Nope, what you get at the Hickory House is barbecue, burgers and a lesson in Arkansaw speak. 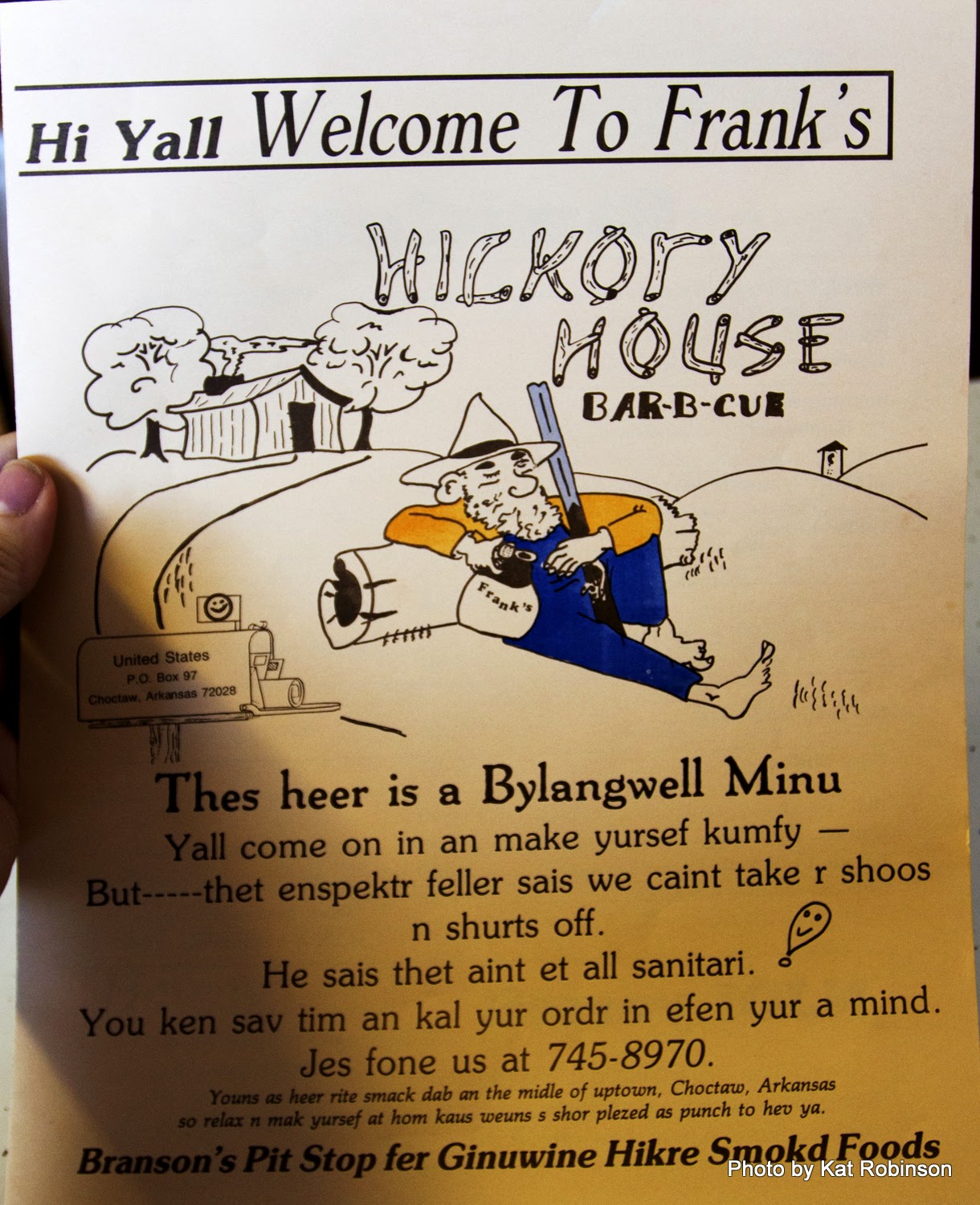 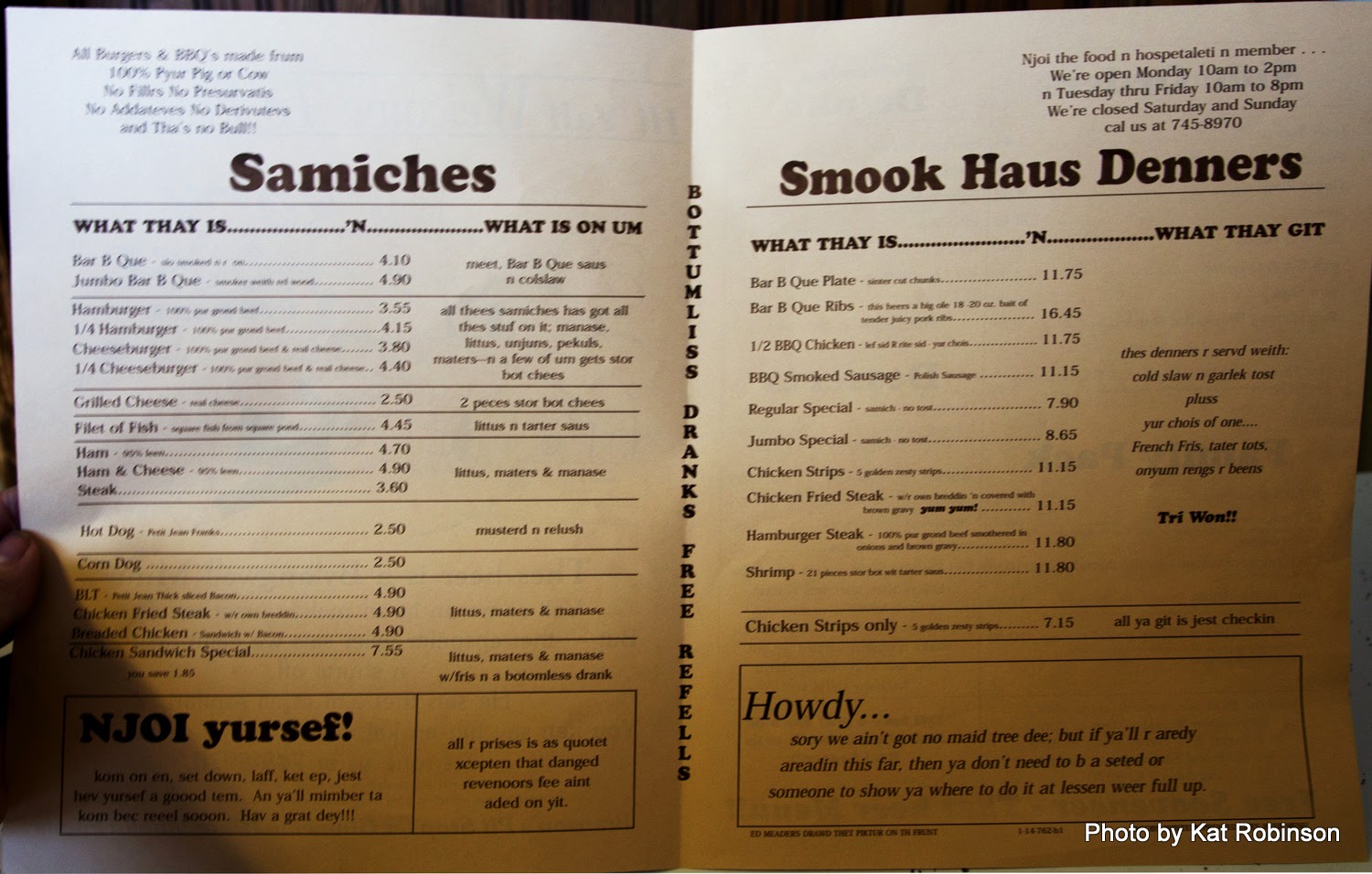 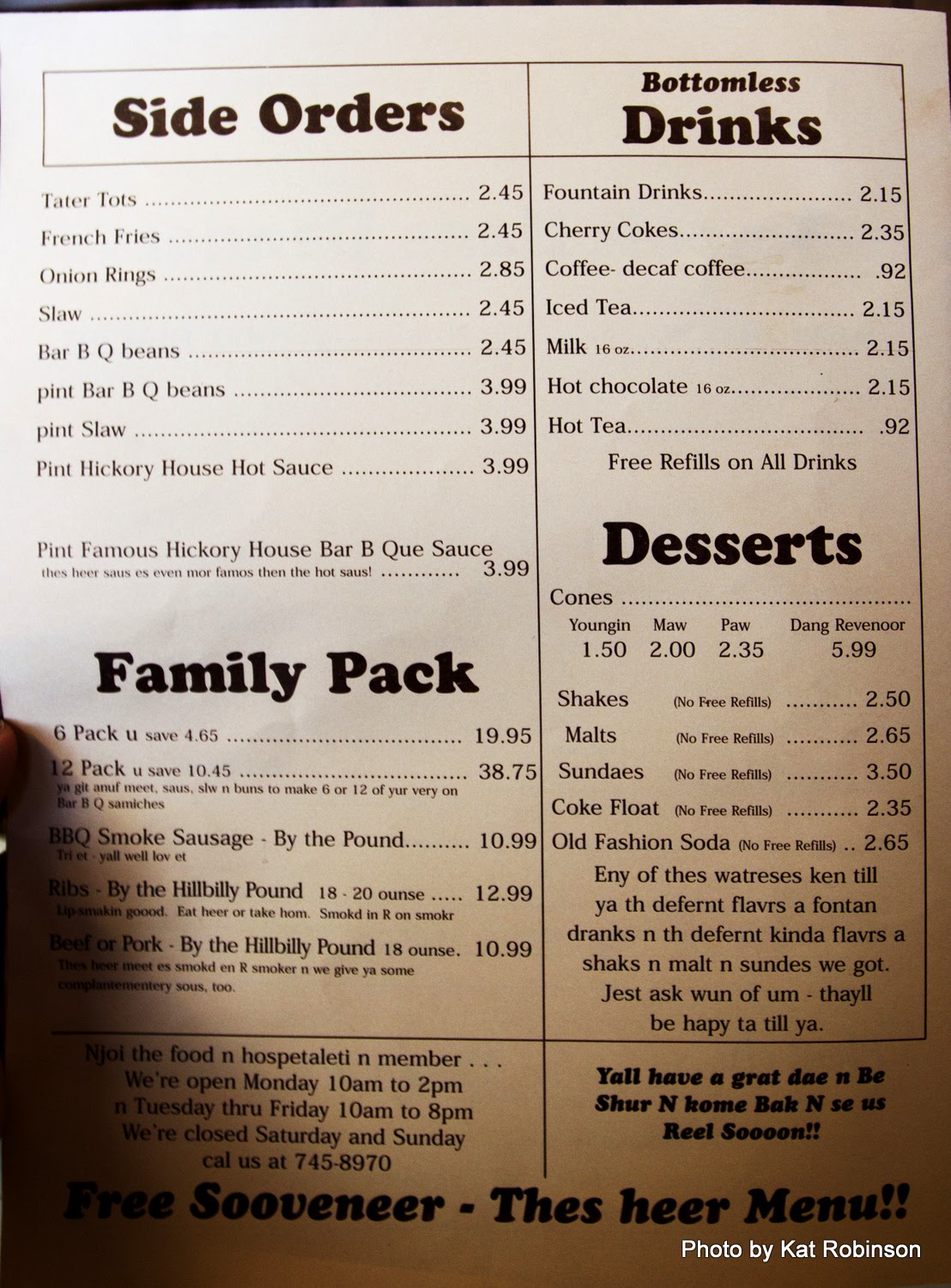 A sidenote for you. Back when I was a kid, it was not uncommon to see signs, menus, postcards, you name it written out in local dialect. Back then Arkansas natives owned that hillbilly heritage and utilized it to draw in curious tourists and travelers to find out more about this strange preserved corner of Appalachia in the Ozarks. Arkansaw-speak was most notably in presence at places such as Booger Hollow, Dogpatch USA and even at one time Silver Dollar City. However, when the man from Hope hit the national spotlight in the early 1990s in his run for the presidency, the state shaped up -- and today you see very little of that old speak. Mind you, I was of a generation that worked very hard to show that our state was not a bunch of "backwards hicks," and I still endeavor to show the good side of the state... but there is something to be said about that particular dialect and its representation in popular media.

I mention all of this because of the "Bylangwell Minu" at Frank's Hickory House. It is, indeed, a menu written in Arkansaw-speak... with definitions in modern English. Click on the pages here if you'd like to see the whole thing.

I must admit, seeing such a menu was a thrill -- it was humorous, sure, but there in all the glory were words written the way they were once pronounced in this area... not just "maters" and "samiches" but full sentences, such as the listing under "smook haus denners" that states "thes denners r servd weith cold slaw n garlek tost pluss yur chois of one... French fris, tater tots, onyum rengs r beens. Tri Won!!" 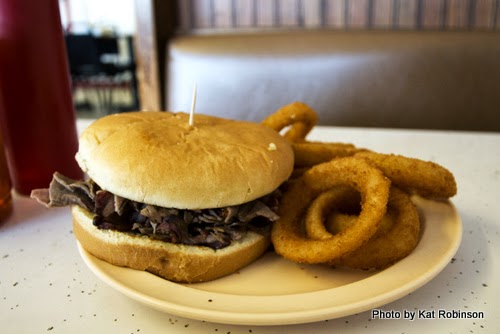 Mind you, when I stopped in, I simply planned to utilize the facilities, pick up a to-go order and get back on the road. But the interior of the place lured me in -- and the waitress convinced me I needed to sit a spell. I ordered a Jumbo Bar B Que 100% Pyur Cow Samich weith cold slaw n onyun rengs and Iced Tea with free refells... excuse me, I fell in a pool of dialect there. 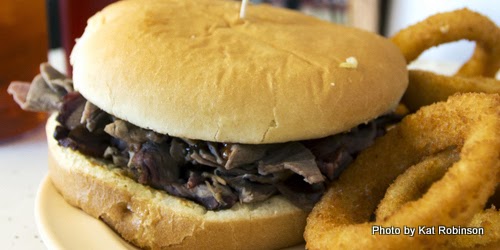 My 'cue was intriguing -- instead of simply sliced or chopped beef, it was shaved smoked beef with a sweet sauce and a nice pat of coleslaw on top. It was very different from the usual texture I've come to expect with Arkansas barbecue. And I liked it.

While I was enjoying my sandwich (which, after one attempt at eating it whole, I consumed with the help of a fork), I listened to a conversation going on at the next table by a couple of the folks who worked there. After a few minutes, I determined that the lady in the red R-Can-Saw Diver shirt was Lora Benedetti, and we struck up a conversation. She told me about the place, about the kids that would come in and look at everything, and about adults who couldn't keep their hands off the bobbleheads and the aloe vera plants.

I did ask Lora about her shirt, and found that indeed, she is a certified diver... and every year, she goes out in the "mud hole" (apparently an affectionate name for Greers Ferry Lake) -- and she shared how enjoyable it is to get under the surface and explore. I shared her a bit about what I knew about Lake Ouachita; she told me about her one fascinating trip to Belize... and by the time I left, she'd loaded me up with diving magazines to share with my daughter with the emphasis that I needed to try diving myself and to take my daughter along, too! 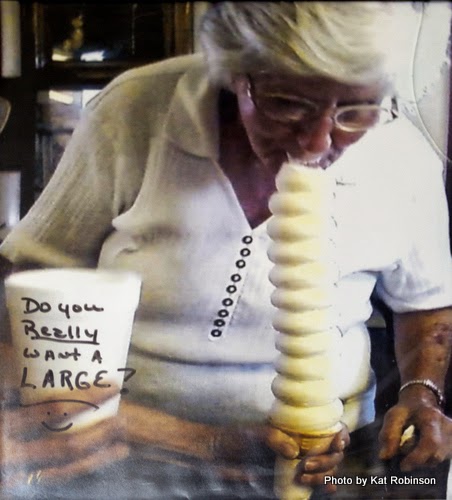 I also asked Lora about the photo on the wall in the back -- this photo in particular, of a woman consuming an impossibly tall soft serve ice cream cone. Well, I'm letting the cat out of the bag, I guess -- that creation is called the Dang Revenoor, and it's actually on the menu for $5.99. I'm impressed that anyone can get that much ice cream on a cone -- and keep it vertical!

Since I had spotted the photo already, my waitress determined that I now knew the secret and couldn't be surprised with such a creation. I hadn't planned on dessert, but she rattled off to me in five seconds every ice cream creation on the menu -- shakes, malts, sundaes, Coke floats, old fashioned sodas, cones and such -- along with a list of flavors recited so fast I couldn't determine every one of them. What did catch my ear was the word "malt," and I happily acquiesced to being set up with a chocolate malt to get me down the road. 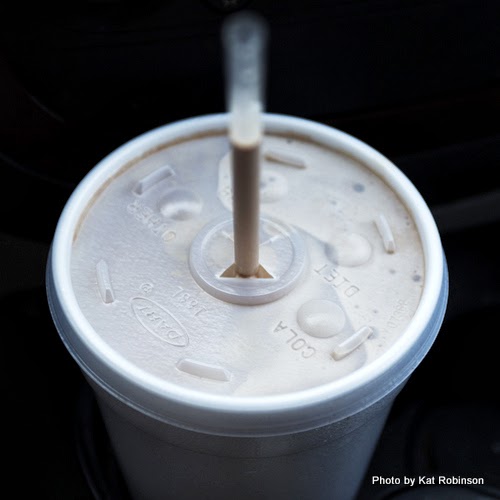 I wish more places still did malts, by the way.

I will have to drop in on the Benedetti family and their marvelous restaurant again -- it's a great stopping-off point on the drive, easy in-and-out -- and the folks there are friendly. You might stop for a spell, too... just be sure to bring an appetite and a little curiosity, and don't be afraid of that Dang Revenoor. 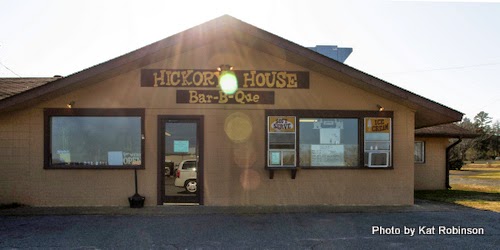