A marvelous stand-out in a land bursting with Mexican restaurants, La Media Luna adapts to this uncertain era while serving up incredible, excellent and fresh fare in northwest Arkansas.

The first time I visited La Media Luna, I nearly missed it. Tucked in awkwardly behind a gas station's pumps, it's easy to overlook the blue bonneted square. But it was worth finding. 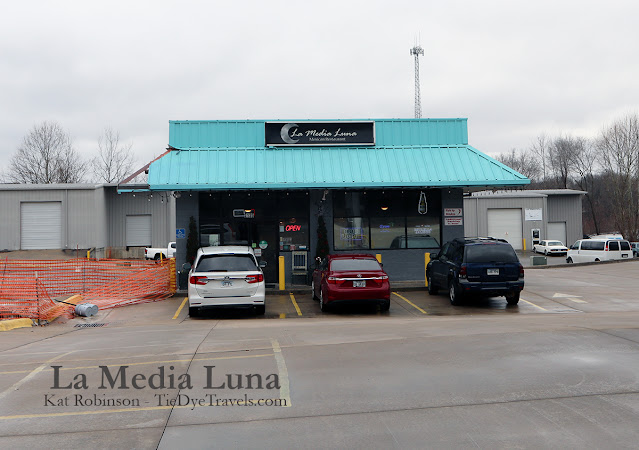 On my first visit in January, I was delighted to find it for an early lunch at the end of a research trip. I had stayed at the lovely Inn at the Mill the night before and was looking for some place close before making my final stops in Fayetteville and heading home. I had the usual Mexican restaurant expectations, which were quickly and happily burst by the eatery owned by Julio and Adrian Leonardo, who have brought flavors enjoyed in their family's community of Pachuca, Mexico to northwest Arkansas. 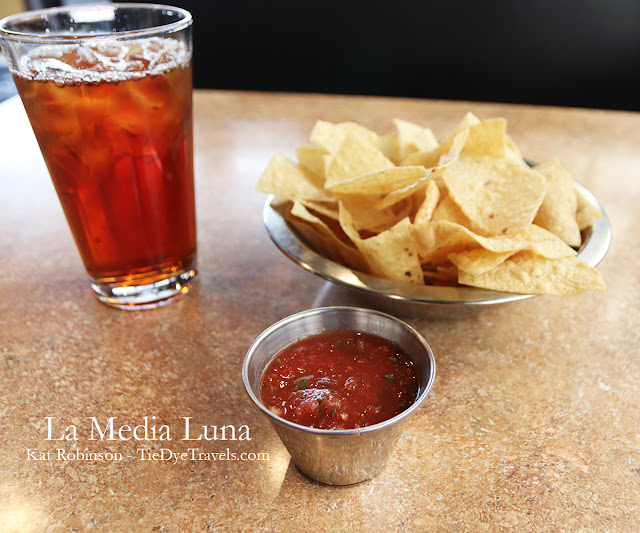 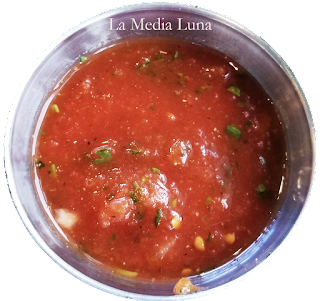 My waitress was happy to give me time to take in the menu, providing hot corn chips and a lovely, tomato-rich salsa alongside my usual iced tea. I immediately noticed the vegetarian options on the menu - not the usual dishes lacking the meat, but a variety of different options, such as a quesadilla with broccoli, mushrooms, and carrots in addition to peppers, onions, zucchini and squash. The Veggie Luna looked amazing - a taco filled with beans, avocado, mushrooms, peppers, tomatoes, onions and cheese served alongside a tostada and a guacamole salad. There was also a lovely spinach enchilada listed. I find myself being drawn to meatless meals on the regular these days, and I could see several delightful options.

I also noted that white cheese dip was on the menu, right above guacamole and queso fundido - a melted cheese that could also be ordered with steak or chicken. 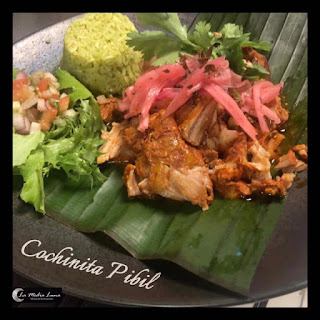 On the other hand, the Camarones Envueltos were eyecatching - shrimp filled with cheese, wrapped in bacon and deep fried. There was the Razorback Quesadilla, stuffed wiith al pastor pork, two cheeses and pineapple; a whole column of "Mexican Fast Food" that included a Cheese Steak Burrito and various tortas and flautas. There's a whole list of house specialties, like the Conchinita Pibil, a pork loin slow roasted with achiote anatto seeds and 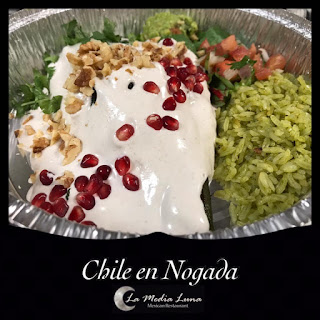 There was also the Chile en Nogada, a poblano pepper filled with pork, dried fruit and  walnuts covered in pecan cream and pomegranate seeds - a real departure from the expected rice, beans and burrito fare so common at Arkansas Mexican restaurants. 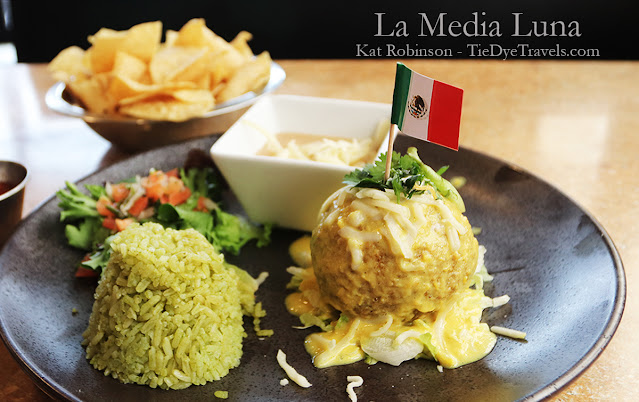 But I'd been given the tip to try the stuffed avocados. Done well, they're delectable. Done poorly, and you have hot avocado and disappointment. I ordered the lunch portion (called the Avocado lunch) and was not disappointed. I was given the choice of several sauces for the dish, including a chipotle sauce, a hotter habanero sauce, cheese sauce or salsa verde; I went with the cheese. I certainly didn't expect a gorgeously prepared dish for $6.49, but that's what I got - a cylinder of herbed rice, a ramekin of refried beans, a spot of green salad topped with tomatoes, and the avocado - this lightly breaded and fried avocado delicately topped with cheese, a dollop of cheese dip running down its sides, and a small Mexican flag on a toothpick, stabbed into the top, all served o a black plate. 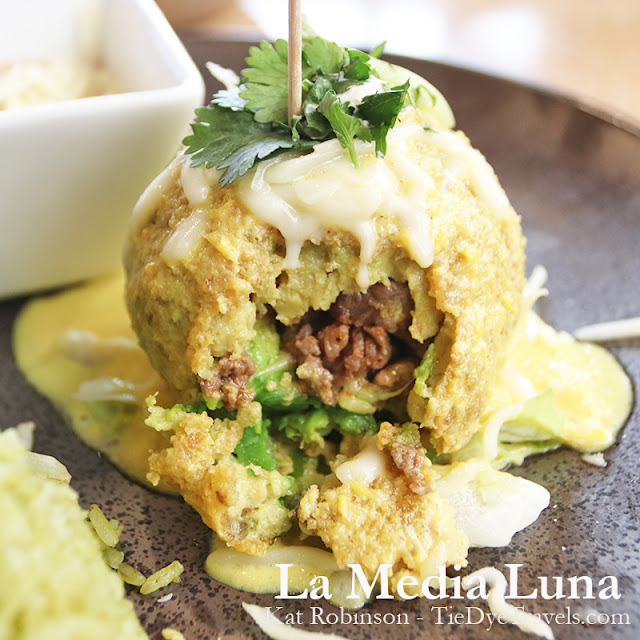 I sliced into the avocado, stuffed with steak, and found the combination of nicely seasoned beef, pliant avocado and cheese was both hearty and sumptuous. The crisp batter on the outside provided a lovely crust. The beans were a little softer than average, and the rice was properly seasoned, with notes of lime. 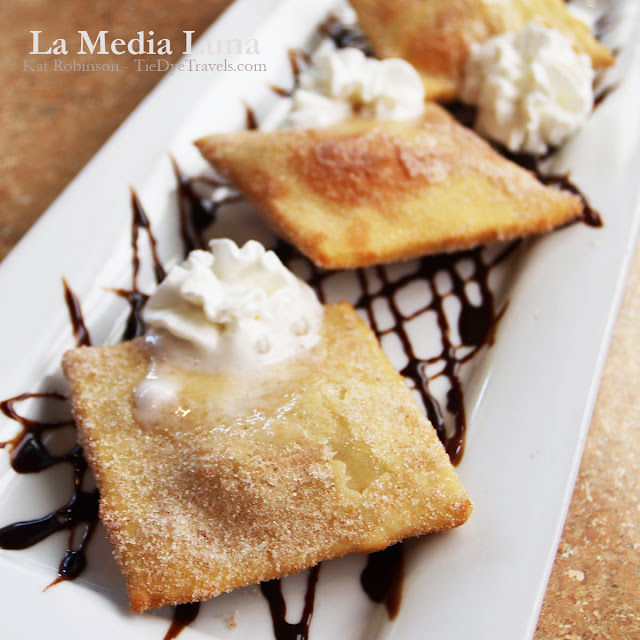 Having a lunch portion meant I didn't feel so bad about ordering a dessert. While the fried ice cream looked tempting, and my curiosity was piqued with the Pastel 3 Leches, illustrated on the menu as a slice of a three layer cake, I went with good, old fashioned sopaipillas. They've been a favorite since my childhood, when I'd use an enormous amount of honey to fill the puffy pockets at Mexico Chiquito. These came out, not in a small basket, but dolled up like they were going somewhere, three just-out-of-the-fryer fluffy squares, presented on a chocolate syrup drizzled plate and topped with whipped cream, which quickly melted into the pastry. I had planned on asking for honey, but found myself well pleased with the combination of whipped cream and chocolate to sop. Yes, I used my fingers. 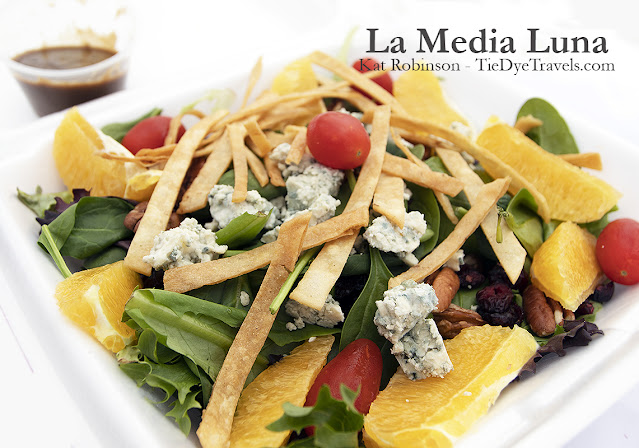 My quick pick-up on my next trip through solidified my previous thoughts on the restaurant. I didn't have time for a sit-down lunch before heading to my outdoor destination, so I called in an order and grabbed the La Media Luna Salad. I was not disappointed. On pickup, I was advised to toss the contents of the clamshell box with the dressing provided - as it's done in the store. That was a good call - too many salads go limp if doused in dressing before being picked up. What I received was a crispy bed of green leaf topped with an entire orange worth of slices, cherry tomatoes, big chunks of blue cheese, candied walnuts, dried cherries and strips of tortilla. The dressing, which I put on after the photo (sorry, I was hungry) combined balsamic vinegar and oil with agave syrup and agave leaves, was tangy and sweet. A very good, light salad! I made a note to get the guacamole salad the next time, seeing another customer dining on one at a booth near the register. I could see the huge scoop of guacamole was heavily drizzled with white cheese dip amidst a goodly amount of beans. 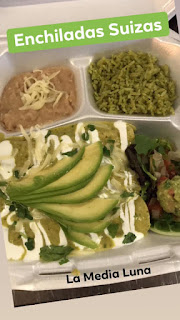 But I didn't get to go back, because my scheduled visit there for April was cancelled by the pandemic. I have watched for months now, the photographs popping up in my feed from La Media Luna. Like pretty much every restaurant out there, this eatery had to make changes to keep customers coming by, safely. It quickly switched gears and started offering so many dishes for pickup, not only emphasizing the grab-and-go ease of taking food home, but actually actively showing what comes in the package. It's not easy to keep food looking as good on take-away, but La Media Luna is not afraid to share. 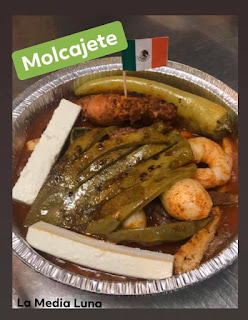 In fact, the image of the molcajete keeps coming up in my feed, which is just telling me I need to take someone with me when I go. It is, according to the menu, "a mixed grill of carne asada, nopales, chicken, shrimp, cheese, jalapenos and chorizo sausage. Served with guacamole salad, rice and your choice of refried or charro beans and tortillas." And that sounds just extraordinary.

I should mention, the restaurant offers several alcoholic beverages, including a range of frozen and traditional margaritas, coconut and hibiscus 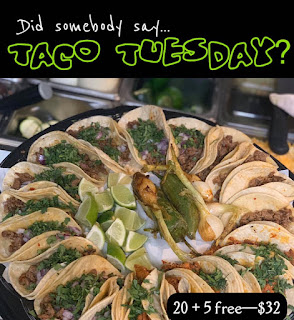 mojitos, and an ample selection of Mexican beer.
There's also a great Taco Tuesday promotion with five free tacos for every 20 ordered, so if you're looking for a family meal, there you go.

The restaurant does now allow some limited indoor dining, socially distanced. It's also reclaiming the parking area in front of the restaurant specifically for patio dining, offering another option for those who are concerned about being in indoor spaces during this pandemic. I've decided as soon as I am clear to travel again, it'll be one of the places I enjoy when I get into town. 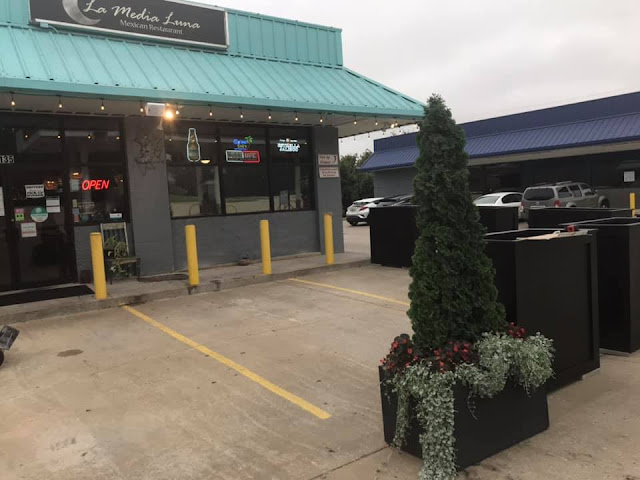 La Media Luna is located in the Johnson community, sandwiched between Fayetteville proper and Springdale. It's located on Main Drive, about halfway between the interstate and Thompson Avenue, three blocks to the east and the other side of the street from the excellent Wright's Barbecue. It's open 11 a.m. to 9 p.m. Monday through Saturday, and closed on Sunday. The major delivery services (GrubHub, DoorDash, Bite Squad and Uber Eats) all have the restaurant on their offerings. There's also a pick-up window. Be sure to tip.

The restaurant is very good about updating its Facebook account - with delectable photographs (some of which you see here throughout this article) and Facebook live events. Musical guests are common, which is lovely. Listening in from afar isn't as good as being right there, but it sure is nice. For more information, check out La Media Luna's website or call ﻿(479) 316-8008. The menu is available below.

This article contains images from the La Media Luna Facebook page, as well as images taken from previous visits to the location by the author. 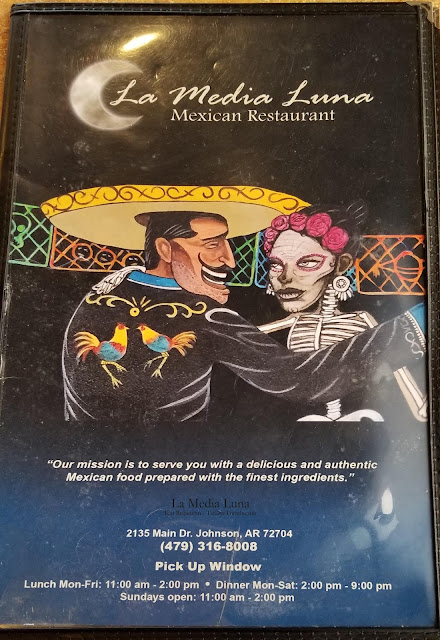 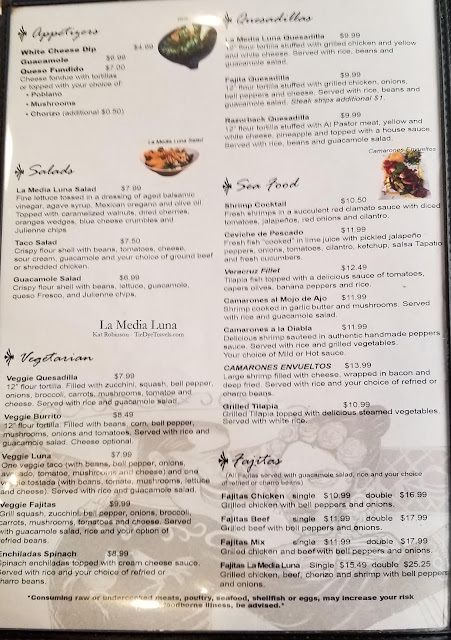 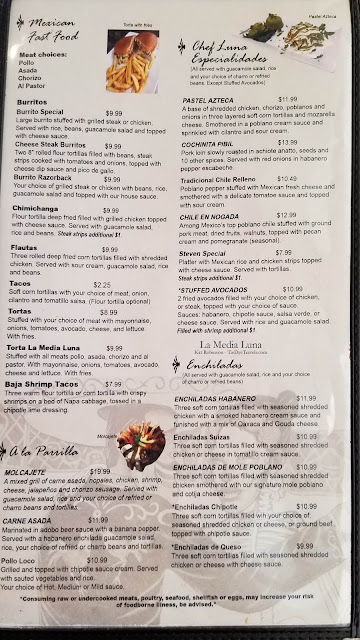 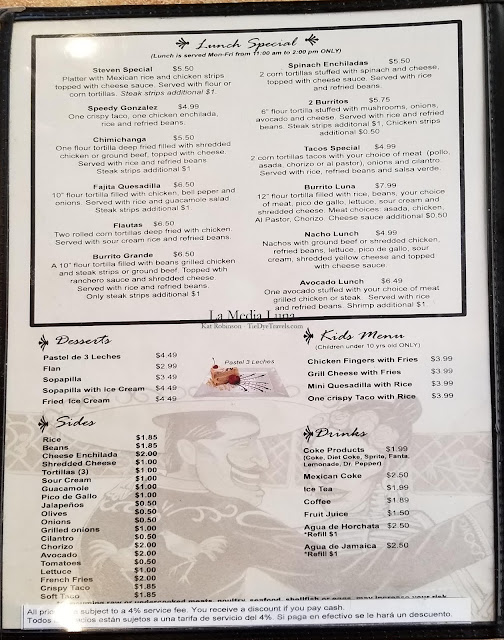