Quarantine Cuisine, or So I Found a Turkey in My Freezer. 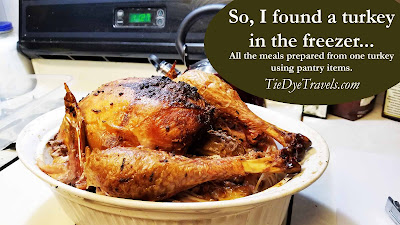 How many meals for three can you make out of one 12 pound turkey? Let's talk turkey for a while. Recipes included.

The COVID-19 quarantines are affecting us all - and frankly, it's no time to travel. With restaurants on a pickup only basis and social distancing a requirement, I'll be turning Tie Dye Travels to stories and to recipes, food tips and the like for the duration. I have been quarantined since March 12th and will likely continue for the next four to five weeks. Please enjoy these ideas.


I've always kept a well-stocked pantry and freezer. My grandparents did this, my mom did this, and I learned from my earliest days the essentials every good pantry needs. There have been jokes about this made with many of my friends, especially those who depend on me as a restaurant writer. It may seem odd, considering how much I dine out for research.

This, however, is my time to share and shine.

I took an assessment of our resources here at the house the first full day in quarantine. Now, when the pantry is flush, we rarely purchase anything for the home besides milk, bread, eggs and cheese (so much cheese) on quick trips to the store. When we're flush and I'm off the road, I assess what's in the cabinet and freezer and clean out things that should go. If you'd like to see my recommendations for pantry products, please click here.

While going through the freezer contents, I discovered a 12 pound turkey purchased in January. We usually stock up on frozen meats whenever we encounter them on sale, and at 29 cents a pound, this bird would be worth it. It was a bird shipped frozen and sold frozen, so there's no concern about thawing issues. Grav took it out on Friday to thaw in our fridge, and I set to preparing it Sunday night.

I'll alert you now - there will be links added to the end of this piece as I go through this turkey challenge. Each of the recipes I'll make are meant to feed a family of three - me, Grav and Hunter - and will include expected serving sizes. We usually make extra for leftovers. We actually adore leftovers. 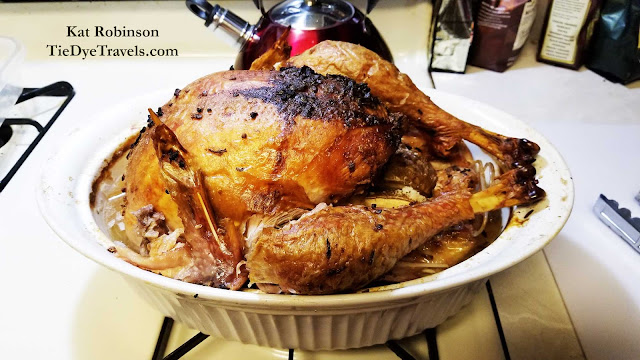 I took the bird, liberated it from its packaging, and removed the giblets and neck. I believe in seasoning all my meats, but knowing this would be utilized in several applications, I chose spicing that would work for almost everything.

To that end, I went with dry garlic and salt.  I rubbed the bird vigorously with salt both inside and out, then placed it in my French casserole.

Within, I placed two green D'Anjou bears, sliced in half. Having a starchy fruit within like pears or apples gives some flavor to the meat, and absorbs a lot of the greasy bits. These fruits should be thrown away once your bird is out of the oven.

I wrapped the wing tips with aluminum foil and then loaded on dried garlic on all the top surfaces. The bird went into the oven at 350 degrees.

After an hour, I took a 1/4 cup shape of homemade "green butter" I had stored away in the freezer. This butter was made with bruised parsley, kosher salt and, well, butter. When I have fresh spices that are coming to the end of their useful period, I tend to either dry them or pound them into butter for preservation. There are historical precedents; maybe I'll get into that at some point. I took the butter shape and rubbed it over the skin of the entire bird, then left the remainder sitting atop the breast and closed the oven again. I reduced the temperature to 275. The butter basically fried on the skin, producing a very crispy skin on a baked bird. Grav loves the fried skin.

The bird cooked another 2/5 hours before being liberated from the oven. This was where I began. 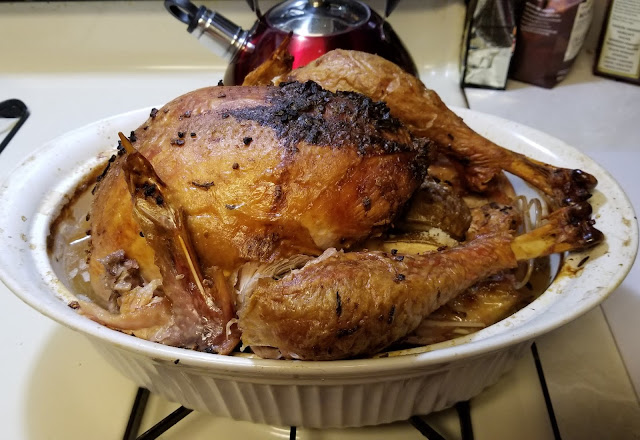 After a brief rest, I dismembered the chicken. For this I use tongs and a knife. I began by pulling the drumsticks and wing tips, then moved on to the breast 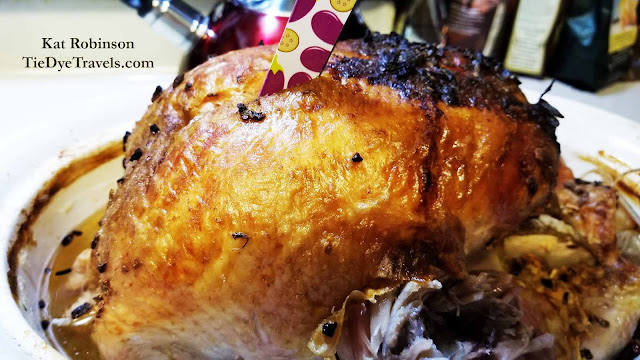 - which I removed by slicing down directly from either side of the breast bone, 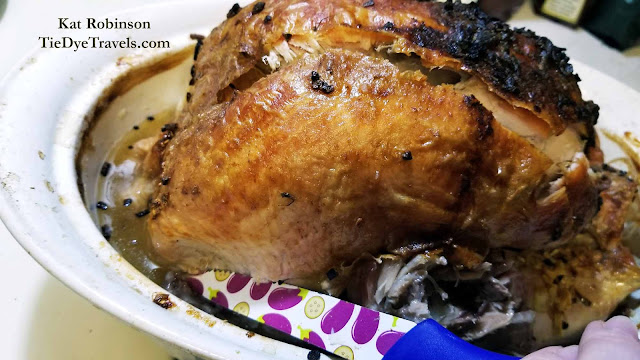 then slicing from the side atop the ribcage and all the way in to the cut from the breastbone. 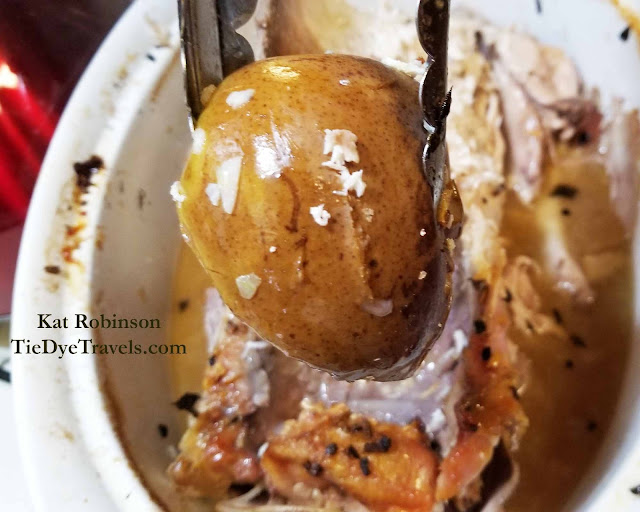 I removed the pear halves.

The thighs, which by the end of the bake time were submersed in a combination of melted butter and the turkey's own drippings, were pulled with the tongs from the carcass after cutting the cartilage at the hip with a knife. I removed the clingy bits, the oyster or pope's nose (that part that's at the tailbone), the small rounds of meat below the ribcage on the back, and the last of the bits along the breastbone. Here's the meat I had. 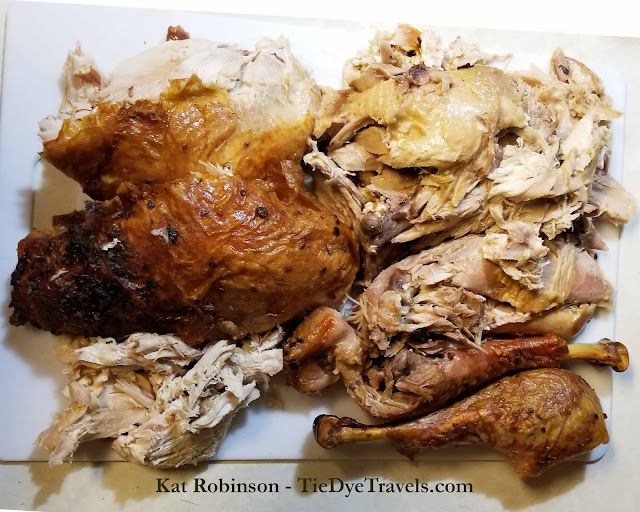 That's a lot of meat to work with!

To prep the turkey for the meals to come, I set aside the drumsticks and wing tips (they were crispy on the outside and may be a meal of their own) and moved to slicing the turkey breast across the grain. 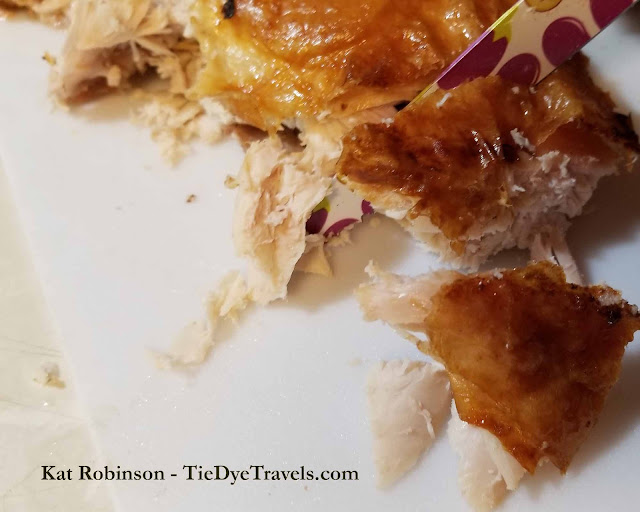 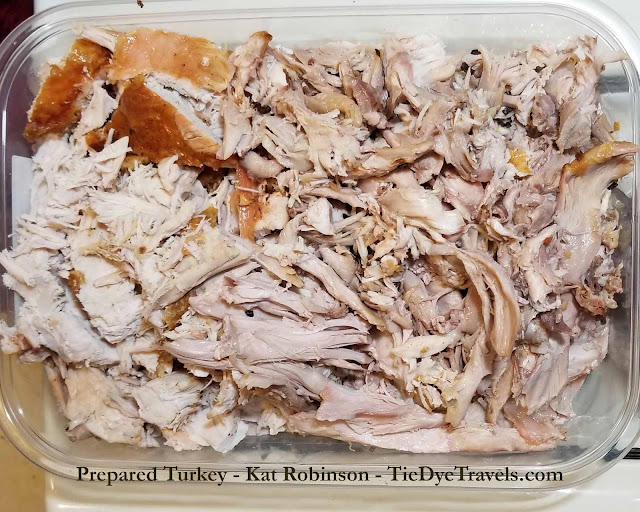 As I sliced, I arranged the turkey pieces from white to dark in a container for collection. This is what I had when I was done. For now, this goes directly into the fridge, covered.

What will I make with this? First off, there's broth - which is its own kitchen tool.

Here's all the recipes I have come up with and which I've actually made from the single turkey (so far):

I should note that Grav ate the turkey wing tips and legs, so that should count for something, right?