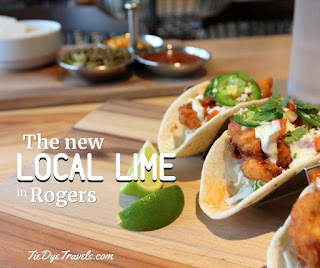 I've seen things. Really remarkable things. And you'll be able to see them soon, too. Let's talk about the latest Local Lime locale,and what to expect. Also, I ate things. Because that happens.

The last week of September, Local Lime will join several other of its fellow Yellow Rocket Concepts sibling restaurants in gaining its second location. This one, in Rogers' Pinnacle Promenade, is to my knowledge larger and more open than any of the other eateries in the group. It's housed in what was once Texas Land and Cattle. Because it's not completely finished, I respected Amber Brewer's request. You're not getting interiors. You're getting descriptions of what I saw when Scott McGehee gave me a tour this week. Be impressed when you come in... soon. 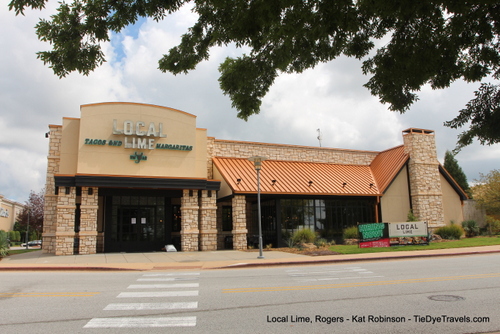 First off, if you were ever inside Texas Land and Cattle, you might have remembered it as a long, dark space reminiscent of steakhouses of the 1970s, with lots of dark wood and a definitive lack of windows. That's all gone, all ripped out, not just the dark walls but the low black ceiling. It's been ripped out to the exterior, allowing for large, custom made windows that let in so much light. There are custom made windows everywhere along the exterior, from the front which can be angled open for air on spectacular days to the greenish ones that separate the airy main room from the patio-style "jungle room." New cuts in the exterior along the side allow for large windows that will give light and air to a brand new party room space that seats 64 just off the bar - a space with a large screen wireless-access TV and custom made banquet rollers.

The exposed beams are currently being hung with lighting that will come from sisal rope, intricately planned but organically placed - this will be a remarkable place for foodies to shoot once it's complete. A long custom-made banquette-style couch sprawls under custom made mid-century palm leaf wallpaper. Several very long reclaimed wood tables span the width of that room, perfect for large groups but also available to sit more than one party at a time - a great way to make new friends.

The core area of the room is also open to the bar, which has been considerably expanded from its former occupant's days, a white marble-topped amply-wide station just as good for dining as for consuming the numerous margaritas that will come across its surface. A gigantic wall of limes is planned at an angle to the barback, feeding into an enormous margarita machine; several more of those monsters are set in the center of the barback adjacent to racks of tequila and high-end alcohols of various sorts. Ahead of them, taps stand at the center of the bartenders' lair. Separation between areas is accomplished by square California-style concrete breeze blocks, a nice mid-century note. Amber Brewer's touches, from the custom six point stars in the jungle room to the compass stars in the restrooms all on Mexican tile, reclaimed wood-topped tables, and succulents in clay pots, shine throughout.

Scott also gave me a view of the kitchen. where the crew is already taking the steps to conjure the dishes that will populate the menu. It's too bad I can't share the scents of fresh vegetables, numerous peppers and salsas, because if I could you'd never want to leave this page on this site. There are stations for salsa, a fajita station, a grill area for tacos, and two separate chip warmers. There's far more space than I expected.  Flour tortillas will be made here - corn tortillas, which I will talk about in my next article here. 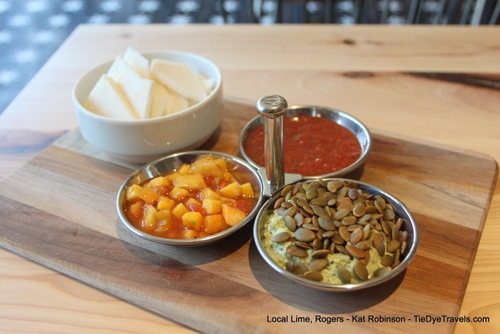 As I said, I promised not to show the interior. But Scott did set me up with items to try. And those, I did photograph. As you'll see, the light in the jungle room space is excellent. 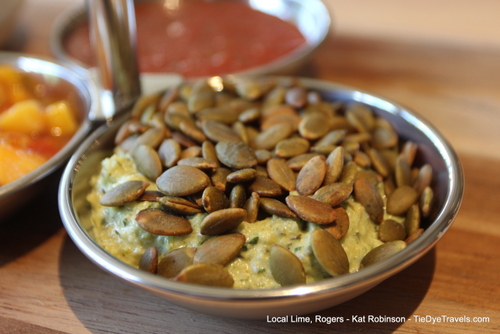 To start, a trio of salsas served with jicama slices instead of tortilla chips - my choice, actually. I adore the nontraditional zucchini salsa, not just because zucchini (can't get enough zucchini) but for its surprising depths of nutty heat. Pumpkin seeds provide an ample, meaty crunch while hints of green chile echo through the fluffy unction. 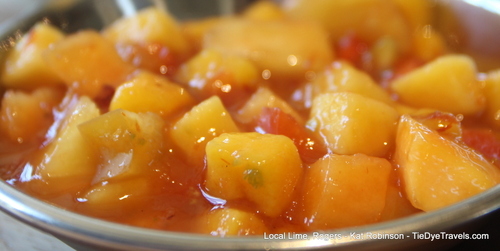 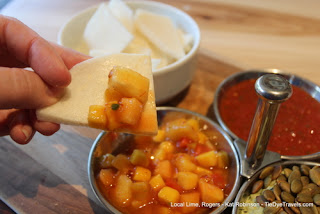 The mango salsa is bright without being cloying, fruitmeat meeting onion and pepper in a gorgeously pulpy structure - maybe a little hard to dip with the jicama but such a splendidly textured concoction that I would gladly consume it with a spoon. 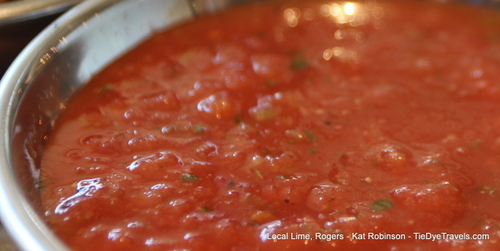 The house tomato salsa tastes like summer, like lightly salted and black peppered Mortgage Lifter tomatoes with a shot of fresh pepper vinegar. Far more traditional than the others, but far closer to the salsas I grew up with. 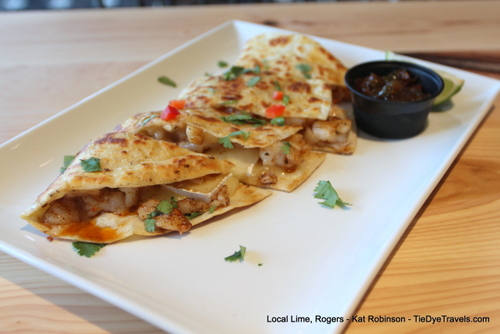 The second plate, shrimp and brie quesadillas... look, I could eat this forever. I don't think about brie and quesadillas, but now I will have to. Mild, spiceful but not spicy, fully realized but not overcooked shrimp, a strong undeniable bite, black pepper and cayenne notes to the shrimp, buttery throughout, elevated by a mango tomato chutney I want to spread on biscuits. No, I'm serious, I would be happy with substituting my dessert for a while with fresh goat cheese and this particular chutney. See - that's what this fare does to me - it keeps me thinking and moving on to more ideas while I'm enjoying it. 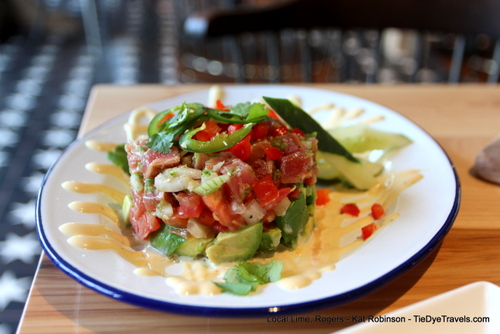 Then there's something that would be extraordinary breakfast food - and when I say it, you may shake your head. That's the ceviche. See, I don't do much ceviche - I've had far too many bad examples plated in front of me, where fish and vegetables have spent far too much time in a marinade, to the point where it just taste like pickles and shame. This, though... see, my current breakfast cycle is avocados and fresh fish, which I usually don't get on the road because people look at me as if I'd lost my mind (the jury is still out). 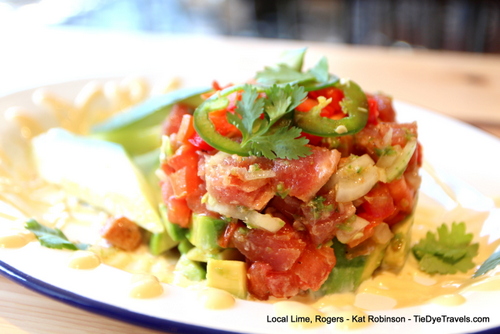 This ceviche was perfect - a tossing, a dressing of the elements, seared tuna and avocado and perfectly diced tomatoes, tiny bits of red bell pepper and slivers of white onion, with a bit of paper-thin sliced fresh jalapeno on top and plenty of garlic mayo drizzle to incorporate into the mix. This is my gamechanger. I think I've just encountered my go-to dish at Local Lime - that, and perhaps fresh tortillas with that mango chutney. But I digress. 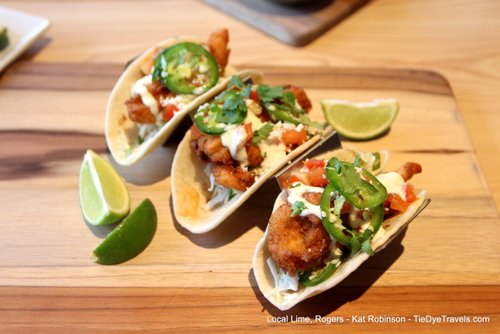 The last of this quartet of presetations was a simple trio of fried chicken tacos. These finely portioned chicken breast tenderloins were dressed more in spices than batter, light and a little salty, a good counterpoint to the jalapeno mayo and the cool slivers of jicama jalapeno slaw within. What is a shocker is the preponderance of more of those shaved jalapeno slices, both atop and within the tortillas, a smack-in-the-face shocker if one doesn't expect it. I can see my partner enjoying the peppers - me, after the first bite I set about half to the side, the sissy in me overruling the desire to throw caution to the wind. After all, there's only so much iced tea I can drink. 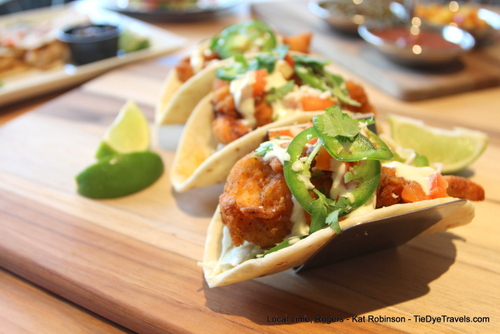 I suspect the peppers will stay on when I am able to dine without imminent travel in my dayplans, when I'm able to relax on this veritable veranda and sip on a horchata colada, an idea of coconut cream, pineapple and lime juices, two types of rum and cinnamon that inordinately intrigues me. I could get on that boat all day long... if I wasn't working. Which I was this particular day - and since my day had begun in Fayetteville, traveled through Bentonville and Fort Smith and ended in Little Rock, a delectable boozy lunch just wasn't in the cards. That, and the fact that Local Lime Rogers hasn't opened yet.

It will - right now the opening is expected around September 25th, and I'll be in town for a speaking engagement that day and probably back for round two. Prepare yourself.

You'll find the new Local Lime at Pinnacle Promenade in Rogers. Check out the Facebook and prepare to head to 2103 South Promenade Boulevard, Suite 1010.