Meaty Expectations Delivered at Blacksheep Smokehouse and Grill in Yellville. 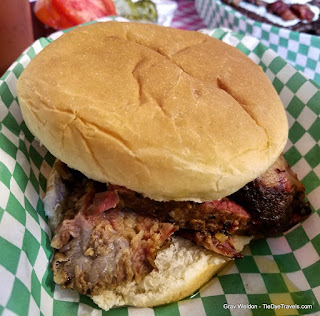 A relatively new barbecue joint in north Arkansas is handling its own quite well with barbecue and burgers worthy of renown. Let's take a look inside Blacksheep Smokehouse and Grill in Yellville.

What I can say is that a menu drew my interest.

We were working in Searcy County on a variety of stories, and had stopped in at Crockett's in Harriet. Just inside the door there was a rack with menus, and a bright yellow menu drew my attention. I picked it up, knowing lunch was going to be a necessary endeavor at some point.

Indeed, our lunch was delayed quite a bit with our other shoots, so by the time we actually rolled into 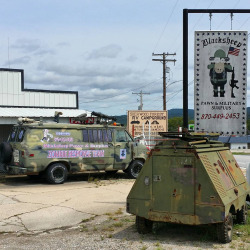 Yellville it was after 2 p.m. and Grav and I were both ravenous. We followed US 62 out to the curve on the west side of town, where we found Blacksheep Smokehouse and Grill across the street from Black Sheep Pawn. I will point out that Black Sheep Pawn has been noticed by us back a couple of years ago, when we were gathering information during our end-to-end trip along Arkansas Highway 14. 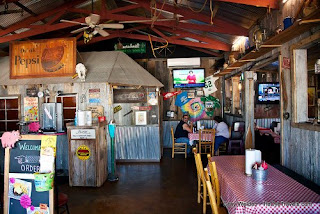 It was pushing 100 outside, so walking into the far-cooler wood-clad interior was an immediate relief to us both. The menu was scratched out in chalk on blackboards overhead, with a few items featured on a waist-high board covered in printed out photos at the entryway. It took us a few 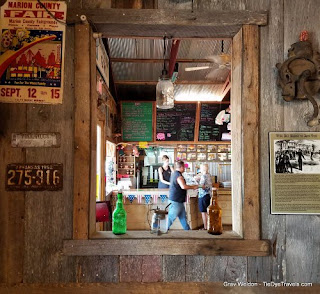 moments to make our decisions, but we did so and took our number to wait in a back corner of the back room and chill out a bit, once we had acquired Mountain Dew for him and unsweet tea for me.

We sampled the sauces available while we waited. The sauces are an equally wide range of choices. Old Faithful is a medium-thick sauce, somewhat 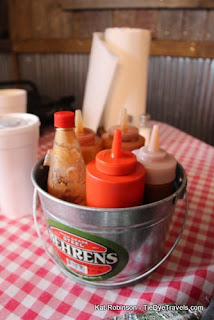 sweet with black pepper notes. Pig Potion No. 9 is thinner, sweeter - a splendid blend of honey, brown sugar and vinegar with other notes. And then there's Angry Hawg, a cayenne-and-pepper infused barbecue sauce. Grav did find there's an Angrier Hawg sauce reserved at the register that includes ghost peppers.

The decor inside Blacksheep Smokehouse and Grill is certainly a meeting of the minds between Route 66 chic, country store and feed barn. The music was a similar pastache of modern country, the Eagles, singer-songwriter compositions of the late 70s and the occasional Taylor Swift tune. The clientele was similarly 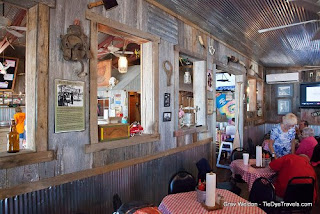 eclectic, with a couple of gorgeous older women with perfectly coiffed white hair at one table, a half-dozen road-sweating motorcyclists at the other end of the room and a family with four under-10 kids in polo shirts of complementing pastels at the counter. To me, this just shows the overreaching joy that is barbecue.

It's not like Blacksheep Smokehouse and Grill is the only barbecue place in town. Yellville is well known for Razorback Ribs, a pulled pork haven inside an old dairy diner along the main drag two blocks from the downtown square. But after our lunch there, I would suspect Blacksheep will easily be able to hold its own. 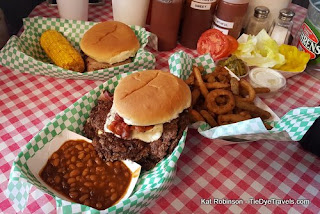 Our number was called, and I went to pick up our tray. I also swung by the condiment station, which is set up like a salad bar between the register and the drinks station. Small plastic ramekins and paper boats are available to collect the items you wish to add to your burger or sandwich, including onions and lettuce and tomato; both crispy and hamburger dill pickles; jalapeno and banana peppers; mayo, ketchup and mustard in plastic packets and more. Once these had been secured, I took our tray to table and we proceeded to shoot. 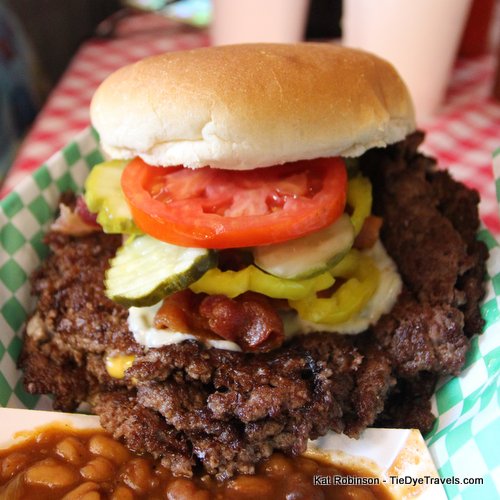 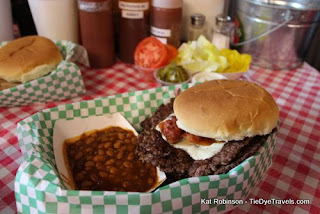 Grav's dish was certainly more stunning in its audacity. He had ordered the Blacksheep Burger, three 1/3 pounds of beef with three slices of cheese and three slices of bacon on a bun. Usually when we get multi-patty burgers like this they come more pub-style for height. Not here. These three smashy 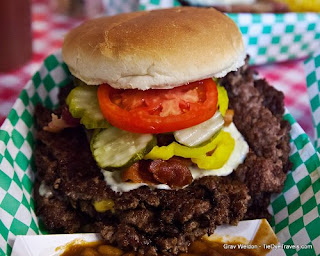 patties had been smushed on the griddle with a spatula, with the accompanying splayed edges of each flattened patty evident. Because of this, the patties don't fit the bun, which just makes it look even more ridiculous. Grav adorned his with banana peppers, pickles, lettuce and tomato, altogether which made this a fork-edible burger. Picking this thing up wasn't happening, thanks to the moisture and heat and grease from the patties the bottom bun soaked in spongelike. He'd decided on a side order of beans, which were littered with bits of pork and were quite sweet. 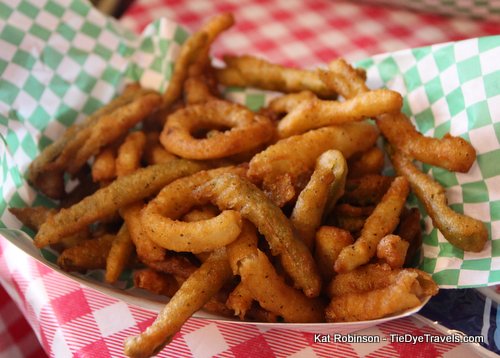 We had decided to share an order of Texarkana toothpicks, which were strips of jalapeno and onion battered and deep fried, served with Ranch dressing. These were pretty standard but good. 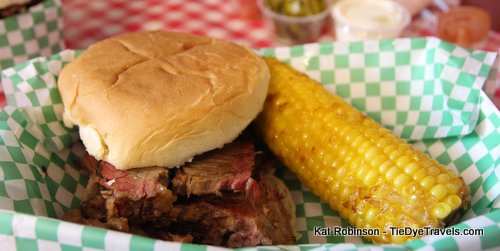 I'd gone for a jumbo sliced beef brisket sandwich and side - and my side was deep fried corn. Unlike Calico County's battered version, this was a whole ear of corn just... deep fried, no batter. The resulting cob was caramelized on the outside, retaining a remarkable amount of juiciness that dribbled down my chin on first bite. 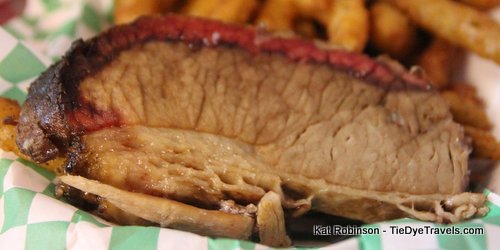 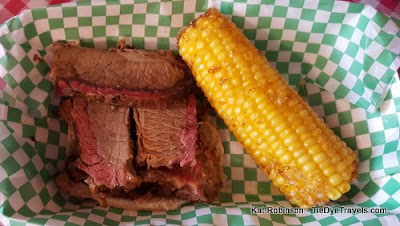 The brisket itself though got most of my attention, with its thick pink smoke ring, quarter inch thick slices in three layers and generally soft bark and bite. The brisket 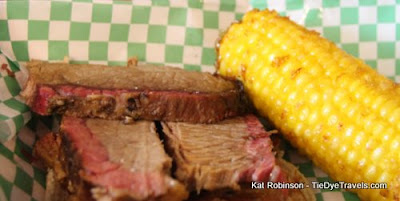 was peppery throughout, not just at its thick rims, yet it was pliant and moist. Best yet, the flavor paired well with both the Old Faithful and 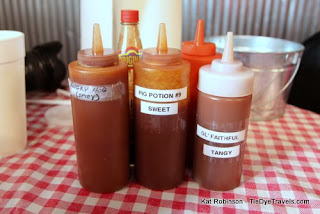 the Pig Potion No. 9, for an overall satisfying bite in the mouth. The surprise came in the lack of coleslaw so prevalent in most Arkansas barbecue joints, though the restaurant's proximity to the Missouri border could account for this. The brisket came unadorned on the bun, ready for my own application of sauce and such. I found out later that the coleslaw is a condiment for pork sandwiches, not for the beef, chicken or smoked sausage sandwiches also on the menu. 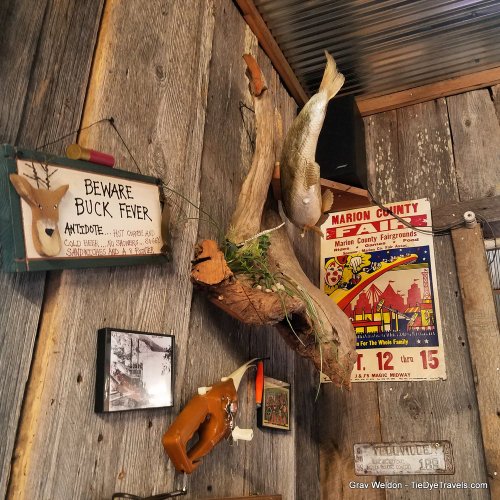 We didn't get into the desserts, which includes a brownie and banana pudding (no pies!). But I did make a note for next visit to have Grav tackle the Barnyard, which is a burger topped with smoked pork, smoked chicken and cheese. And I have to mention the Happy Coronary, which is similar to the Excaliburger being a 1/3 pound beef patty between two grilled cheese sandwiches. 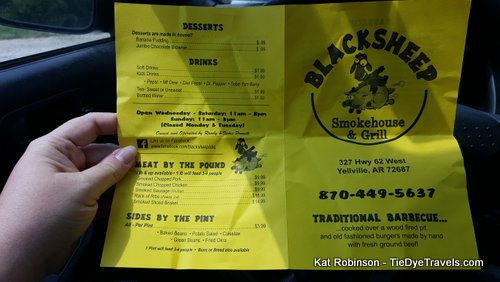 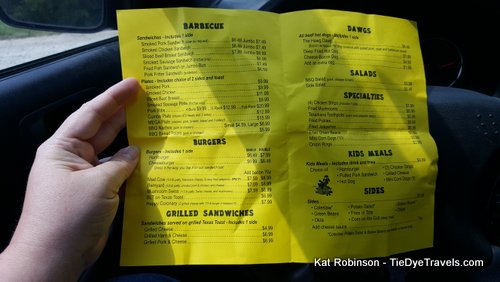