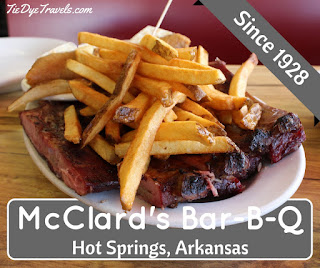 Before there was a McClard’s, there was the Westside Tourist Court, a motorcourt motel serving the needs of travelers coming to Hot Springs for the healing waters and the ponies. Travelers would come and go. Some would stay longer than others. Back in 1928, there was one particular traveler who overstayed the contents of his wallet – and when he went to check out after two months, he didn’t have the $10 he owed on the bill. So he made an offer -- for a barbecue sauce recipe he said was the “best barbecue sauce in the world,” in exchange for his debt. The deal was struck, and soon the Westside Tourist Court became Westside Barbecue.

It wasn’t long before Alex and Gladys McClard had themselves a booming business. Folks came from all over to enjoy that sauce slathered on smoked… goat. No joke. After a while, the meat started to vary a bit, and pork and eventually beef were introduced. 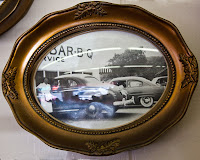 In 1942 the whole operation moved three blocks down the road to the current location at 505 Albert Pike… and it became a drive-in, complete with carhops. Customers would pull up outside and honk and a ‘hop would come out and take the order. 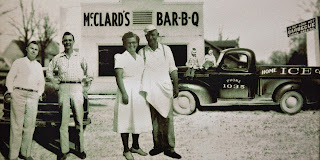 Eventually the building was expanded, and by the time I was aware of the world around me, around the late 70s, there was a dining room with booths and stools lined up at the lunch counter. There was and still is one door for to-go orders and another, on the corner, to enter the dining room – both on the east side of the store. Another comes in from the parking lot on the west side. 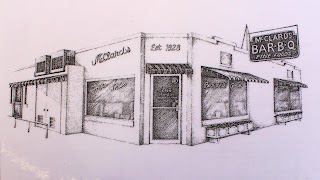 Not much has changed in the past 85 years. A short while back, McClard’s started selling smoked chickens on Wednesdays… and they just disintegrate when you pick up a leg. There was also this patron that kept coming back all the time, a boy who went to school in town who, when he couldn’t make the drive after he moved away, would send folks to come get him some ‘cue. Some guy named Bill, you might have heard
about him.

The meat? It goes into the smoker naked – no spices or marinade. It’s all that hickory smoke flavor you get in the end. And of course the sauce – sweet, tomato-based, a little vinegary and a little spice and that’s it. Simple and just the same as it’s always been.


And then there are the tamales… unlike most masa tamales or any tamales you might find in the Delta, these chopped beef and chopped pork blended and stuffed tamales look like some strange extrusion. They’re steamed up in paper that’s tied at the ends, rather than in corn shucks. They’re served one or two to a plate with saltines, the way Arkansas tamales are traditionally served. You really want to do up a good one – you need to have yourself a Tamale Spread – which is a bed of a tamale or two topped with Fritos and chopped beef and chili beans and cheese and onions and barbecue sauce on top. Woo-ee. The family says that spread was created by a guy who came in one day with a hangover.

But the iconic dish has to be the Ribs and Fries – which is a slab of ribs served under a pile of French fries. I’d suggest doing what my photographer did – and others around me have done – substitute a tamale for half those fries.


Me? While I have oft been tempted by the burger on the menu, I have yet to order it. Depending on my mood, I will go for that beef sandwich, either chopped or sliced. And I am never disappointed by that pile of beef with the cabbage and mayo on it, drizzled in sauce on a Sunbeam bun.

Unless it’s Wednesday, and then I’m having chicken. It’s marinated a whole night before it goes on the smoker. I wish they did chicken every day.

They sure do a lot of barbecue… each week, some 7000 pounds-worth goes into the pit for smoking. They make up and sell 250 gallons of baked beans and 250 gallons of coleslaw, too – and it’s all made fresh in the wee hours of the morning each day.

Now, I did mention that nothing much has changed in 85 years. But I am wrong. Something significant has changed. Just here recently, Ms. Wyona Rowton has left the premises. Any Tuesday, Wednesday or Thursday you could find her scooting about, taking orders and delivering them to the tables. Wonderful woman, always polite and happy. Ms. Wyona retired in May 2011 after 53 years at the restaurant.

There are other folks who have been there a while – 10, 20, 30 years. And the family. The fifth generation of McClards are working the pit and the register these days. I expect by the time I hang up my hat there will be seventh and eighth generation McClards in the restaurant.

So… want to go? McClard’s Bar-B-Q is open Tuesday through Saturday, 11 a.m. to 8 p.m. Of course it’s packed around mealtime, but there’s usually a goodly number of people there even on off hours. I suggest 3 p.m. If you don’t want to wait, you can get a to-go but don’t you dare ask for a reservation. That right belongs solely to that one guy, Bill – you know, the one who’s been coming since his school days.

And if you can’t go at all, you can get some of that barbecue sauce from local grocery stores around these parts or on the McClard’s website, here. Call (501) 624-9586 if you need some more information.