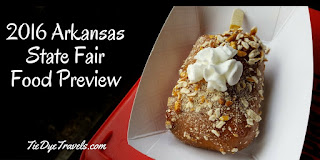 Each and every year, Grav and I make the ultimate sacrifice and try all the new fair foods for you. This year is no different. Check out all the foods we tried at the Arkansas State Fair Media Preview.


This year's event was preceded with talk about a crazy new food, chocolate-covered corn dogs. Click here to read through all the new foods listed in the press release, and what I discovered about each one.

It's time. Let me share with you all the winners and losers for this year's fair food. 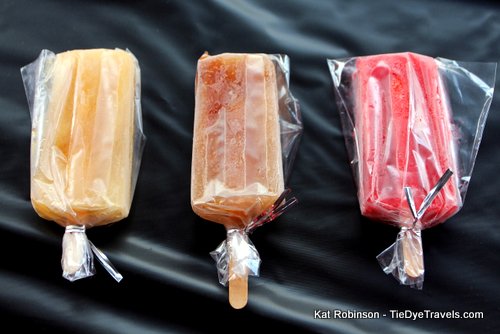 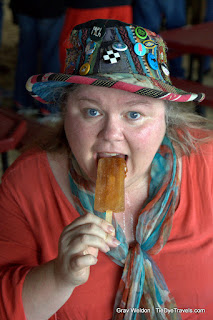 My favorite: Sweet Tea on a Stick.  I was so worried this would be some sort of fried dough with a beverage infused in it. I've declared these dead - I mean, fried Coke is nearly a decade old now. It's old. It's been done. So I was thrilled to see these full-sized bars. And I had to have one. And it was so refreshing... because frankly, I was very, very hot.

There's nothing complicated about this. It's just sweet tea frozen on a stick. It comes in other flavors, too - including an Arnold Palmer (half tea, half lemonade), raspberry iced tea and more. Can we make this a permanent thing? 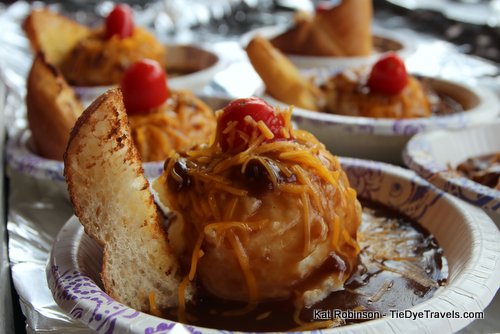 Grav's favorite/Tasty Tom winner for Best New Fair Food: Hot Beef Sundae. We've seen this before, but this is the first time it's been entered in the Tasty Toms, and the proprietor has managed to beef it up with a thicker gravy and more beef. A real crowd pleaser. 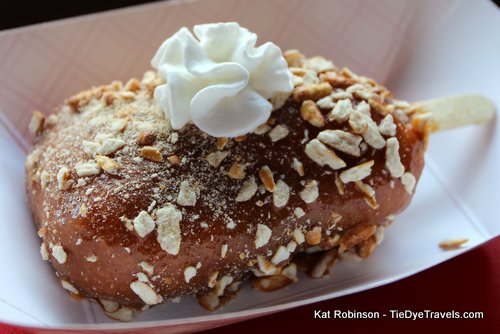 Grav's other favorite/Tasty Tom winner for Most Original New Fair Food: Pretzel Covered Deep Fried Brownie. As I mentioned earlier today, this one's got caramel in it. It's by the folks from Fried What?!?, who always bring their A-game as far as new foods are concerned. Hot, this guilded lilly combines the crunch of pretzel with the smoothness of caramel and the utter chocolate delight of brownie. Marvelous. 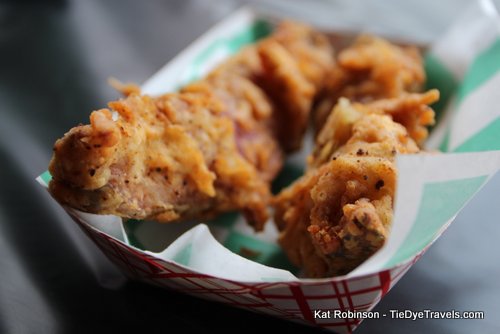 Grav's other, other favorite: Bacon Wrapped Jo Jo Potatoes. From the first bite he was hooked. 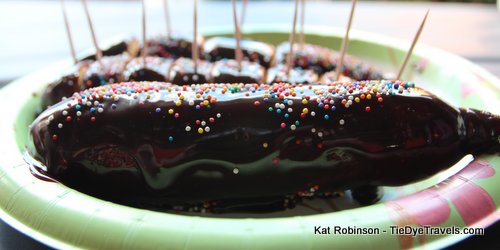 The scary dog: Chocolate Covered Corn Dogs. Very few attempted to try this dark chocolate, sprinkled covered corn dog. Those who I talked with who managed the bite, had two answers - it's all right, and bring on the Pig Licker. So noted. 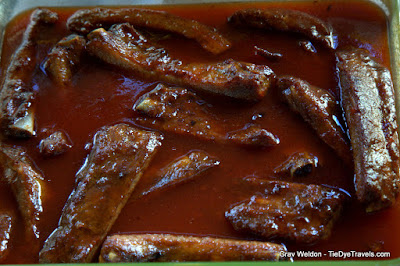 The happy surprise: Deep fried sweet and sour ribs. Something about the process of smoking, then deep frying ribs and soaking them in sweet and sour sauce has created a new Asian-inspired flavor of pork riblets that I suspect will become a happy favorite this year. 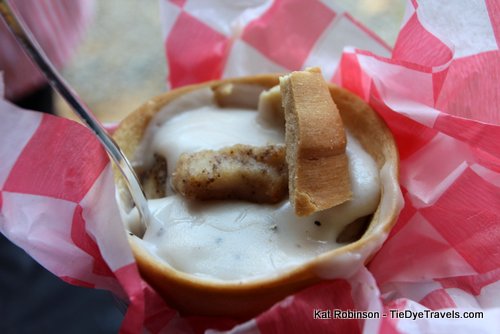 Best new edible packaging: Cones. From the fried chicken and gravy cone pictured to the Jamaican Jerk-filled, the chile con queso version and more, this year's new package for spreading edible joy is the Conewich. While the company that makes these cones hails from Las Vegas, the fillings are strictly Arkansas State Fair inspired. Extra points for only having a miniature utensil and paper wrap to dispose of when the dish is gone. 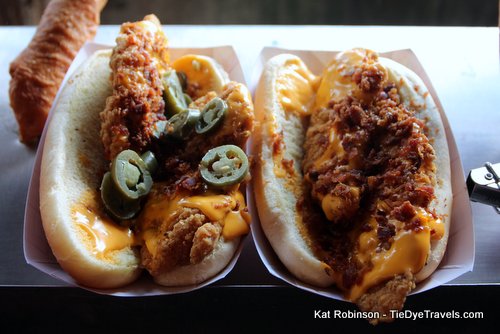 Favorite return: The Bird Dog. Appearing for a third consecutive year, these are fried chicken fillets served in hot dog buns with your choice of bacon bits, nacho sauce and/or jalapeno peppers. A hearty, lovely dish that's bound to be an Arkansas State Fair staple. 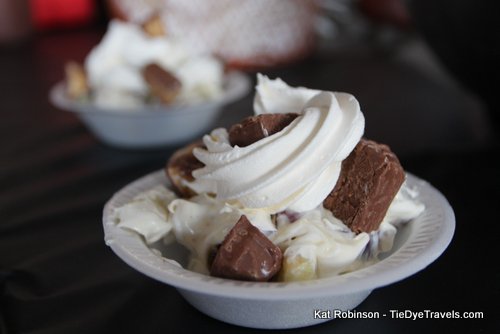 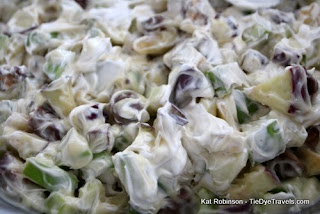 Favorite new dessert: Snickers Salad. The sample you see there is just media preview size. I can't wait to get my hands on a cup full of this combination of fresh chopped apples, whipped cream and Snickers bars. It's a prepared salad everyone's going to love. 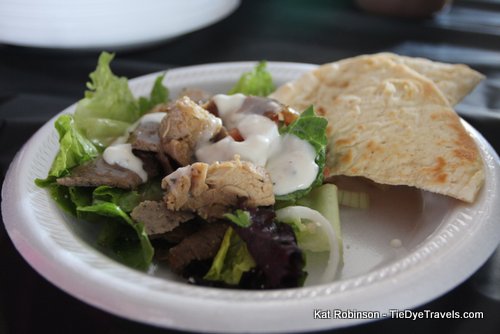 STILL the healthiest plate at the fair: Paizi's Gyro Platter. Fresh salad, homemade tatziki sauce, fresh pita bread and your choice of marinated chicken, beef or shrimp - this is the guilt-free way to enjoy your Arkansas State Fair experience. I know, you can enjoy Paizi's any time now at the brick-and-mortar shop in Fort Smith, but this is what I really want. 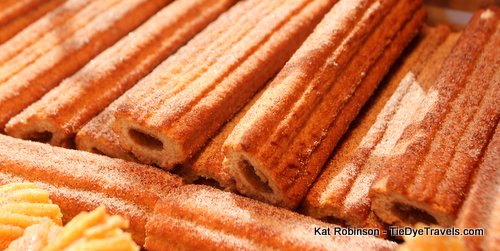 Crispy fun: Apple-Filled Churros. Served up at Leimon's Pizza, these fried and cinnamon-sugar dusted treats are just as good as pie. Yeah, I said it. 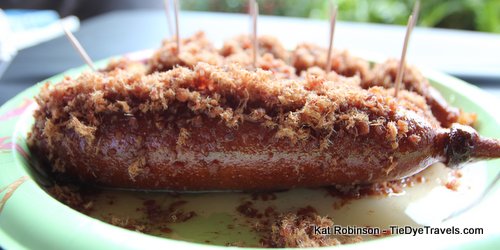 Guilding the lily: Maple Bacon Corn Dog. Sweet and savor is part of why corn dogs are so popular, especially those with a sweet cornbread mix on the dog. Add in maple syrup and bacon shavings, and you get this - a sweet, savory, slightly drippy and so salty blend of everything you probably ever wanted in a fair food. Be careful - add chocolate and you've hit the chocolate-bacon-deep fried trifecta. 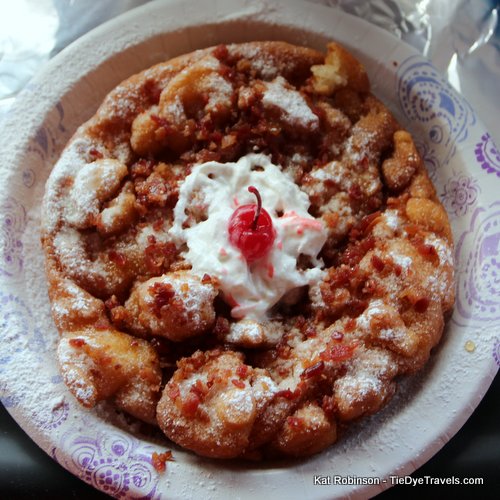 More sweet and savory offerings: Maple Bacon Funnel Cake. Utilizing a maple buttercream and plenty of fresh bacon bits, this thick funnel cake is dinner and dessert in one setting. 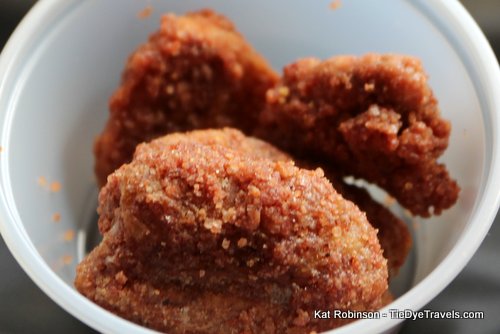 Pumpkin spice EVERYTHING. Pumpkin Spiced Mixed Nuts. While other applications of the spice have mixed results, this is the combination everyone's been waiting for. The folks at Ozark Candy and Nuts have their fingers on the pulse of this nutty, nutty world. 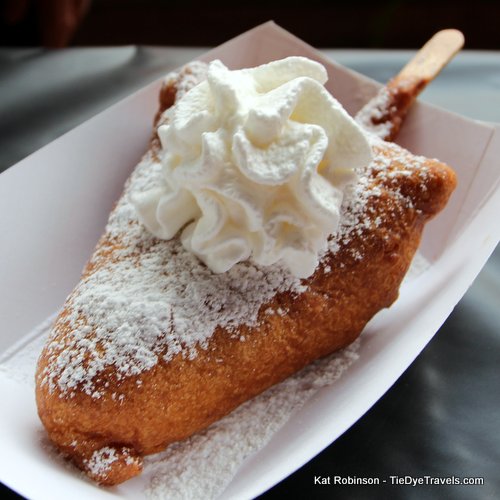 Obligatory plug: Deep Fried Peach Pie. Not just a peach hand-pie, the folks at Fried What?!? top themselves again, battering and deep frying an actual slice of a peach pie. Get yours with plenty of whipped cream. 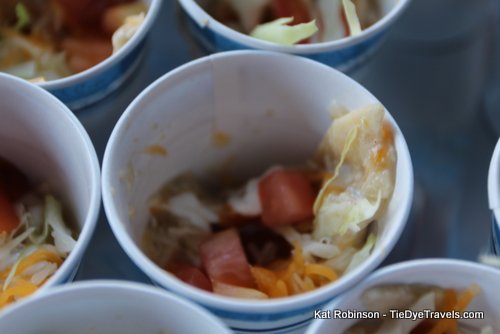 Placeholder: Chicken Enchilada Parfait. Unfortunately, there wasn't a full sized version of this treat to shoot, but this is indeed a chicken enchilada topped with lettuce and tomato and cheese that will be served in a cup. I'm looking forward to seeing the finished product this Friday.

Other foods to watch for at this year's Arkansas State Fair: 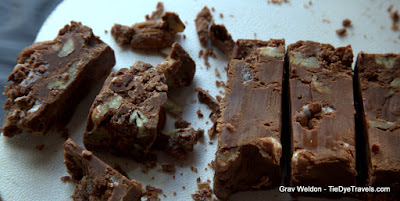 Fudge - a great sweet to grab on your way out to take home for later.