Getting Personal: The Feeding of the Girlchild.

There are no photos anywhere of me breastfeeding. There are reasons for that.

My daughter Hunter is one of four babies born into our social circle in a short span of time, between late 2008 and early 2009. Each of us moms decided we were going to breastfeed our child. Each tried. I was the one that kept on.

Not that there's anything wrong with that. There were circumstances, sure. One had a preemie and could never get the hang of the pump. Another had a terrible time with getting her child to latch.

I had a hard time too. Hunter was late by a few weeks. For whatever reason, my milk just didn't come in. She latched -- that was no problem, except the fact that maybe I wasn't quite prepared for 40 minutes of determined suckling. There just wasn't anything those first couple of days. 48 hours after she was born, I relented and allowed her to be fed formula -- which she all but inhaled, four ounces in under a minute. She was hungry.

But I was still determined to try. Neither my husband nor I had been breastfed past a month, and between my food allergies and his asthma I figured I owed it to my child to make the best attempt I could. The breastfeeding specialists at Baptist came to my room repeatedly, showing me the proper method to bring the milk up, how to use a pump and how to best hold my child while she was feeding. Eventually, the milk came.

Even this, though, came with its issues. See, my mom's generation was far more pro-formula, and even certain of my friends wondered why I'd go through the efforts. Hunter also initially lost weight, almost a pound, and the pediatrician's office put the fear of God into me about making sure she got all the nutrition she needed. And here I was, out of the hospital with almost no bottles or preparation for formula feeding, because I had been determined to breastfeed.

I ended up combo feeding. Yes, I was told from the get-go that most combo-fed babies would end up rejecting the breast quickly because it was too much work. We scheduled everything so she ended up with more breast time than bottle time. That first feeding of the day was always taken in bed, a quiet time for bonding and nourishment. It helped me relieve the pressure that had set in overnight, and was the easiest for Hunter. Later in the morning, especially if I was out of the house working on assignment, there would be a small bottle of formula. We'd alternate through the day, and the last feeding came from me as well.

There were other problems. Within a few weeks my nipples were horribly cracked and painful. I ended up with an infection on one side that took a couple of weeks to go away, and for that time I had to pump on that side, which was terrible. I never really did get along with the pump -- it was painful and it took forever, and I had to hold perfectly still while getting it to work. There were also breast pads -- I found that I leaked just enough for it to be an embarrassment. The pads helped not only to keep me dry, but to alleviate the pain and pressure of my bra.

If I had been holding a traditional job at the time, chances are the breastfeeding would have stopped at six weeks. Even as determined as I was, taking a pump to work just wasn't going to cut it. But as a freelance writer, I was able to spend a lot of time with Hunter, and I made allowances to take her with me with the help of my mom and my friends. She traveled with me out of state and in-state on overnight trips, and when I had in-state assignments I'd wait until she fed that morning, got in the car, rushed to my destination and rushed back in time for the next cycle of feeding and formula.

I had intended to do this for six months. But when it came time to wean, Hunter was not ready. I'd be holding her and she'd turn to me and bite through my clothes. She didn't have any teeth when that first started, but I got the message. When in public, we'd find a secluded space and I'd sit on the floor, indian-style, and cuddle her under my shirt. The whole breast-shield thing didn't work too well with us -- Hunter hated being swaddled or having her face covered -- so I would do what I could to find enough seclusion. Besides, for us that seated-on-the-floor position was what felt comfortable.

She last nursed on Christmas Day, 2009, nearly 13 months after she was born. The next morning I picked her up to feed and settled her in beside me, only for her to start clamoring for a new favorite toy. When she was done, she was done.

She's four now, and we've talked about it... she still remembers feeding from me. I don't know if she'll always have that memory, especially since there are no photos. I didn't feel at the time that it was appropriate. Today, it's different. It might have been of value to me to have taken just one. That memory, though, will never change.

Oh, remember she lost nearly a pound after birth? After that initial setback, she never stopped growing. Hunter registered over the 100th percentile in height and weight pretty much from the second month to the end of her third year. She was taller, busier and bigger than the other girls in her social group. She chose to take her first solid food at four month (wasabi paste -- that's another story) and ate bananas straight from the fruit in the same manner as she nursed for some time. While I was a year old before I cut my first tooth, she was about eight months. We dealt with that pain, too! She has no known allergies and she likes to try everything.

Of course, my mileage has varied from other moms I know. Because she was combo-fed, I can't quite quantify which was better, formula or breast milk. I just know Hunter's a healthy, happy girl -- and I have to suspect that the dietary foundation laid for her didn't hurt that at all.

Now that I've gone through all that... and you've read it all... I suspect you have an interest in breastfeeding.  I have to turn you on to some very interesting information from Healthy Families.  It's spot-on.  I couldn't give you better advice. 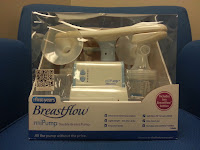 Question is -- would you like to win a breast pump?  Healthy Families is sponsoring this contest... and let me tell you what, it's a good one.  There it is in the photo, the real deal. 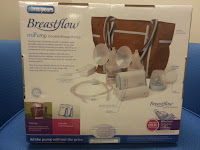 Leave a comment below if you're interested.  It can be about your breastfeeding experience, or about how you hope to breastfeed when your little one comes along.  Trolls will be harassed and embarrassed to the best of my ability.  I'll announce a winner December 21st.